11-A-Side: The Art of Football

The amazing artwork and an interview with American artist Paine Proffitt

11-A-Side: The Art of Football

American Paine Proffitt is the first artist to feature in our new ‘Art of Football’ section. Paine’s work is deservedly starting to gain real recognition and, although he is venturing into different sports and spheres, it is clear that football will always remain one of his biggest loves, and inspirations. 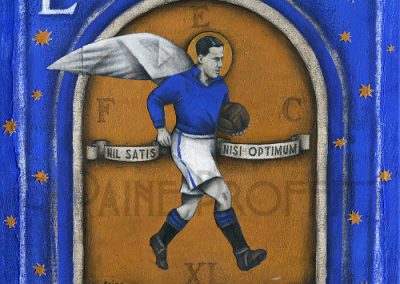 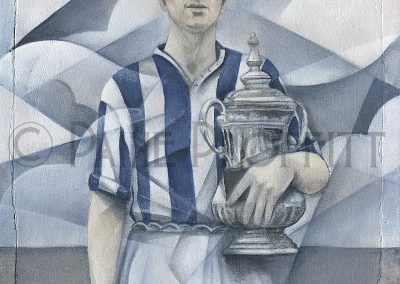 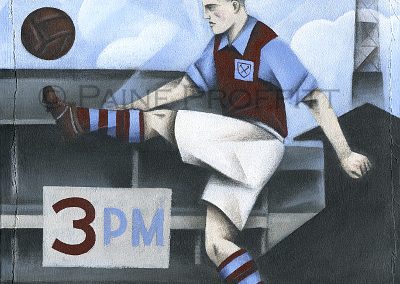 When did you first take art seriously?
I’ve always enjoyed doing artwork but started to take it seriously when I was about 17 years old and knew then that that’s what I wanted to do with my life.

Did you have any formal training?
I went to art school at the Rhode Island School of Design in the US and spent a year at the University of Brighton in England.

Which work are you proudest of?
As an artist there are little breakthrough pieces or series that can mean a lot personally, even if it doesn’t seem like much to everyone else. With each year or series of work I feel like the artwork is getting better and I’m proud of hopefully moving a step forward with every series. I feel like my recent work and some of my personal work is what I’m proudest of at the moment but as time moves on this current work will probably fade into the background.

Who inspires you (from an art perspective)?
I try to take inspiration from all over the place, even from outside the visual arts and sports world – like music, writing and films. I think the other sports artists, especially the number of extremely talented baseball artists, are a big inspiration. Artistic football and sports animations can also get me going … especially the animations of Richard Swarbrick (@RikkiLeaks) … just beautiful work. Other artists such as CRW Nevinson, Picasso, Chagall, Basquiat, Fred Otnes and Diego Rivera are huge inspiration. Visually I also get inspiration from old vintage posters, magazines, programmes and photos … those artists and designers don’t get noticed individually but their work is incredible. I also love the look of Futurism art and Soviet posters, which definitely inspires and influences my work. I just love good art and draw inspiration from paintings and artists everywhere I can.

What is your ambition?
Just to do the work I want to do rather than work I feel like I have to do. I’d actually like to move into doing more non-football work … and work more with baseball, ice hockey, non-sports and personal artwork. It would also be great to work on a great sports campaign or maybe a baseball, ice hockey or football history book … or maybe even do an animation or short film sometime (although when I think of that possibility my head hurts at just the thought of the workload).

How would you describe your style?
I think I have 2 or 3 styles. If I had to put labels on it then maybe a mix of Futurism art and Soviet Constructivism art … with a bit of art deco and vintage poster thrown in.

Where do the ideas come from?
All over really. A lot of ideas and inspiration comes from vintage posters, programmes, magazine covers and adverts. I also get inspired by other artists, paintings, history, photos, etc. 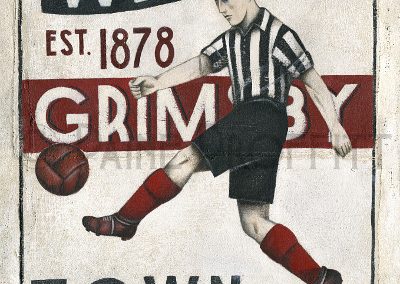 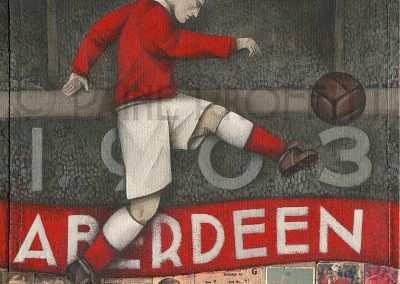 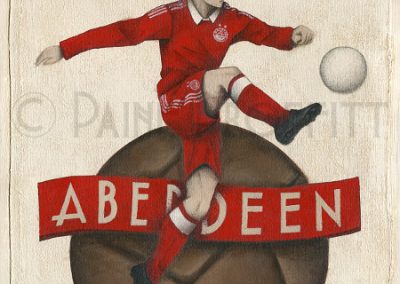 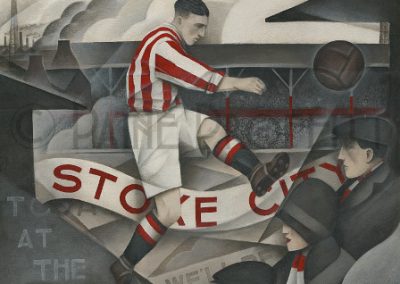 What are you working on at the moment?
At the moment I’m working on programme covers for Aberdeen FC and finishing up paintings for a couple of upcoming exhibitions … one’s a museum exhibition celebrating Stoke-On-Trent as the 2016 UK City of Sport and the other’s a non-sports group exhibition in Cambridge.

Do you have a routine?
Recently it’s felt like Wake, Work, Sleep, Repeat. I usually check social media and emails first thing; deal with admin and errands; research reference material if needed; then get started working and usually paint late into the small hours (with a few breaks for meals and checking social media). I usually listen to audiobooks, podcasts and music while working. I might try to watch some sports or a movie to unwind and put some distance between myself and work … and I play tetris just before bed to sign off. Yeah, you read it right … tetris.

What is your favourite piece of your own work?
As a Port Vale supporter I hate to say this but at the moment it’s a recent Stoke City painting called “Memories Of The Victoria” for an upcoming exhibition. There are also a couple of West Brom pieces from late last season that I was really happy with … a portrait of Tommy Glidden and a painting of Albion supporters on the terraces.

Where can people buy your work?
It’s a bit broken up depending on theme, sport and clubs… 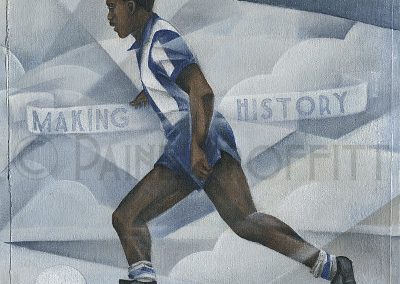 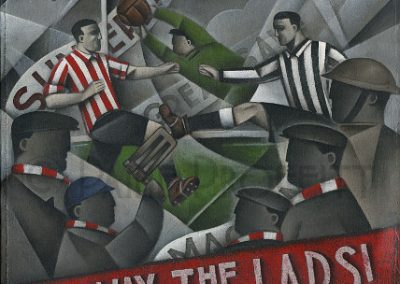 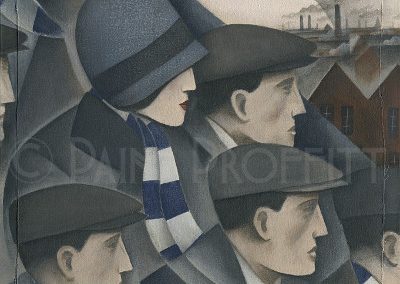 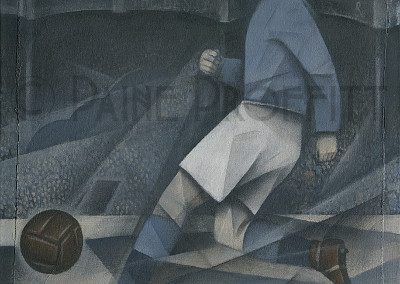 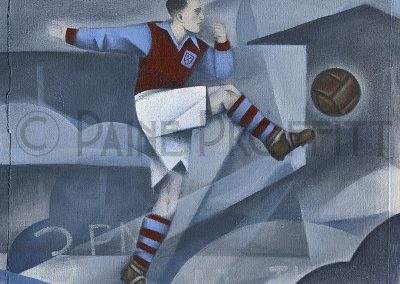 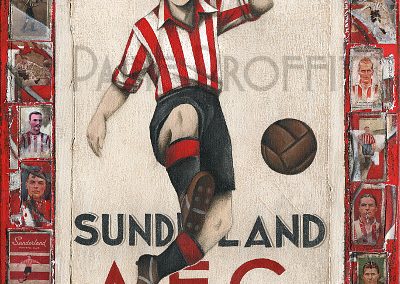 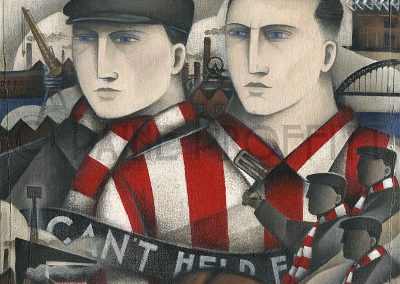 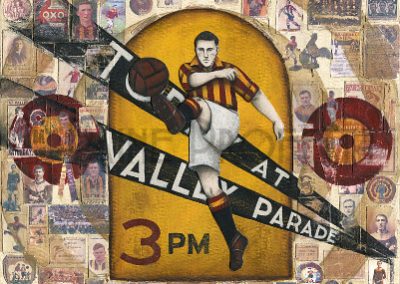 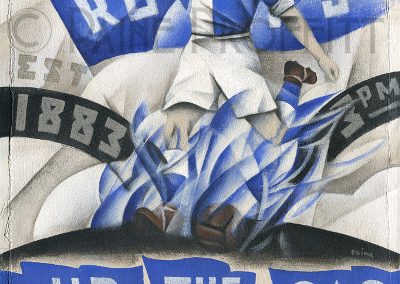 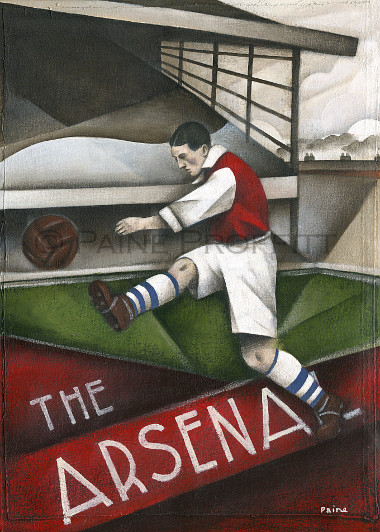 What was your first match?
Manchester United v Wimbledon, 29 January 1997

Who do you support?
Port Vale.

Who is your favourite ever player?
Ryan Giggs. The first football I ever saw was turning on the tv and seeing Ryan Giggs score a fantastic goal v QPR in February of 1994 … he just danced around a couple of players, went in and scored. I instantly fell in love with football, he instantly became my favourite player and I’ve enjoyed watching him ever since.
Are you a regular match-goer?
I’ve had a Port Vale season ticket for a while now and go to all the home matches and the occasional away match. I might get to a couple of other clubs’ matches every season too.

Have you met any of your sporting heroes?
No … not any of the sporting heroes I’ve grown up watching. I did meet West Bromwich legend Tony Brown … sadly I never got to see him play in person. I had only seen him on video and read about him in doing my research for the West Brom programme covers. On meeting him I got star-struck and couldn’t really say anything … in fact I think I just gave him the stink eye. But I got to see him again and talk to him during the rest of that season and he’s a wonderful man with so many great footballing stories to tell.

What other sports do you enjoy?
I also love baseball, ice hockey and rugby.

Best match you’ve seen?
Port Vale v Burton Albion, April 2013 … Vale won 7-1, there was a good crowd, a great atmosphere around Vale Park and we were very close to promotion after years of dark times. A great night. I’ve seen a Wear-Tyne derby and a Black Country derby … those were both fun matches to watch too. On dvd, one great match that stands out for me is West Brom’s 5-3 win v Man United at Old Trafford on the 30th of December 1978. I also remember Liverpool’s 4-3 win over Newcastle in April 1996 being an amazing match!

What do you love most about football?
My favourite thing is just going to a match … the crowd, the grounds, the atmosphere, the game, the excitement, the disappointment, the cheering, the moaning … it’s all great!

What would you change about football?
I’d make it so that teams don’t wear a silly away kit if their colours don’t clash with the opponents in the first place! It’s a real peeve of mine and reeks of marketing and retail trying to sell bad away shirts. I’d also have it so that all new stadiums keep the stands close to the pitch … all these modern stadiums lose a lot in atmosphere with the crowd so far away from the action … and West Ham’s London Stadium takes it way too far. I’d also like to see football distribute the wealth more evenly and fairly to reach the lower/smaller clubs and give more back to the supporters. I think I’d also hand out sizable suspensions for diving and playacting after matches based on video evidence.

Who else does great football-related art?
There are a lot of great football artists and designers out there … a great place to see a collection of them is @wundergol on twitter and instagram. 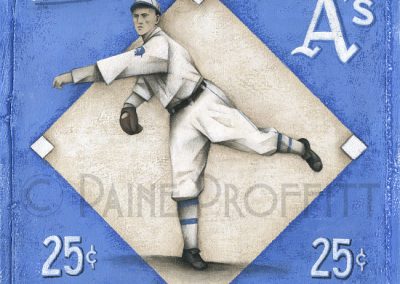 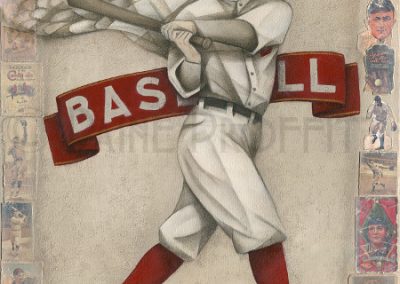 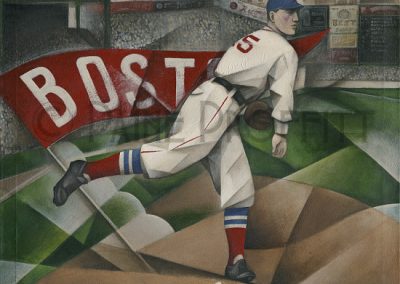 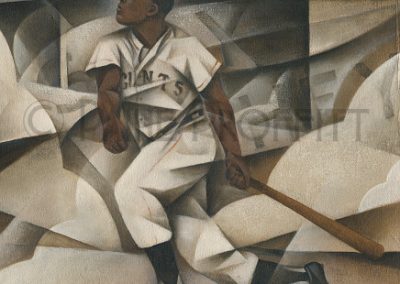 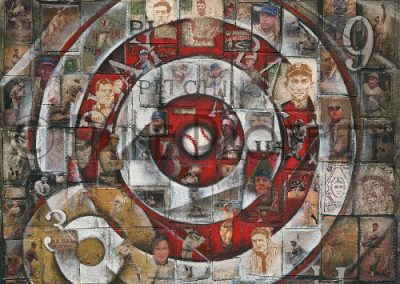 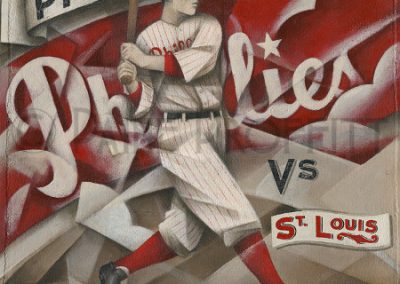 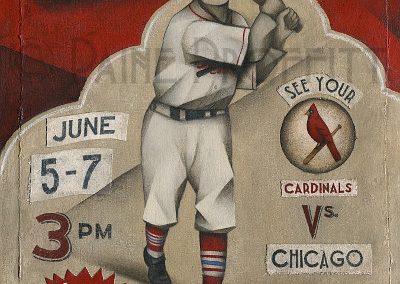 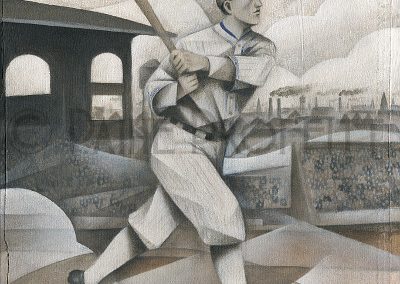