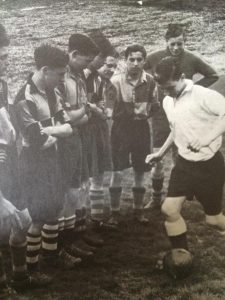 In 1950 England played Scotland in a Schoolboy’s international at Wembley.

Managers were out in force to watch a starlet-studded England side which included Eddie Clamp and Ray Perry but the youngster most in the spotlight was Johnny Haynes from Edmonton. Among those in attendance was Tottenham Hotspur manager Arthur Rowe.

Young Haynes was outstanding, scoring twice in an 8-2 win (he also clashed a number of times with Scots schoolboy Dave Mackay). Both Rowe and Arsenal boss Tom Whittaker made attempts to sign him and must have thought they were in pole position to get the North Londoner.

However, Haynes mulled the decision over and eventually decided to join Fulham who had already signed two of his school friends Tosh Chamberlain and Luigi Caretta.

Initially the youngster was put to work in the Craven Cottage offices, refusing to sign professional forms he was offered on his 17th birthday as he wanted to win a youth team cap before turning pro and they were only given to amateurs at the time.

In May 1952, Haynes went to Portugal to play for the England youth team. On his return to Victoria Station he found Frank Osborne, General Manager of Fulham waiting for him, pro forms at the ready. Youth cap ambition fulfilled, young Johnny signed the forms.

He went on to make over 650 appearance for the Cottagers, his only football league club, before retiring in 1970. He was capped 56 times by England, including 22 times as captain and finished 3rd in voting for the 1961 Ballon d’Or before his national team career came to an end following a car crash in 1962 in which he broke bones in both feet.

Haynes passed away in 2005, after suffering a brain haemorrhage while driving his car. 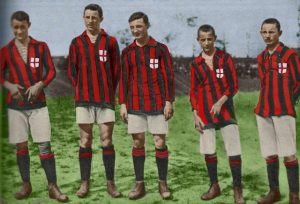 All five played for Inter, three also played for Milan. Between them they won eight Italian titles. Their combined career lasted from 1907-1939

In 1912 Charles Buchan, then of Sunderland received a letter informing him that he had been chosen to play for a Scottish representative side. He had to write back to tell them that he had, in fact, been born in London and therefore couldn’t play for them. He would go on to play 6 games for England interrupted by World War One where he served with the Sherwood Foresters and was awarded the Miltary Medal. 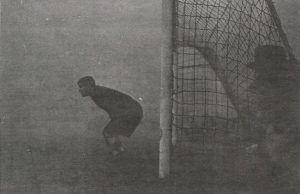 In January 1966 Bradford City were due to play Notts County. Because of poor weather conditions, referee C. F. Duxbury visited Valley Parade the day before to assess the pitch’s condition. He declared it unplayable.

He agreed, however, that if the snow was cleared it might be possible to play.

The club immediately set the wheels in motion and enrolled the help of fans armed with brushes and shovels.

A mechanical snow sweeper was hired, the floodlights switched on, and they got down to the job in hand. Even City manager Bill Harris and skipper Alan Fox gave a helping hand to the operations.

On the morning of the match, Mr Duxbury returned and said: “I have never seen such a radical change overnight in any ground.”

So everyone felt happy and pleased with their efforts.

Then, lo and behold, their hopes were shattered when a thick fog developed and Mr. Duxbury was forced to postpone the match after all!

Who Needs A Whistle?

Referees whistles were first introduced into football in 1878.

Before that, Refs used to merely shout out their decisions. Tommy Dawes, above, looks like he prefers the old method.