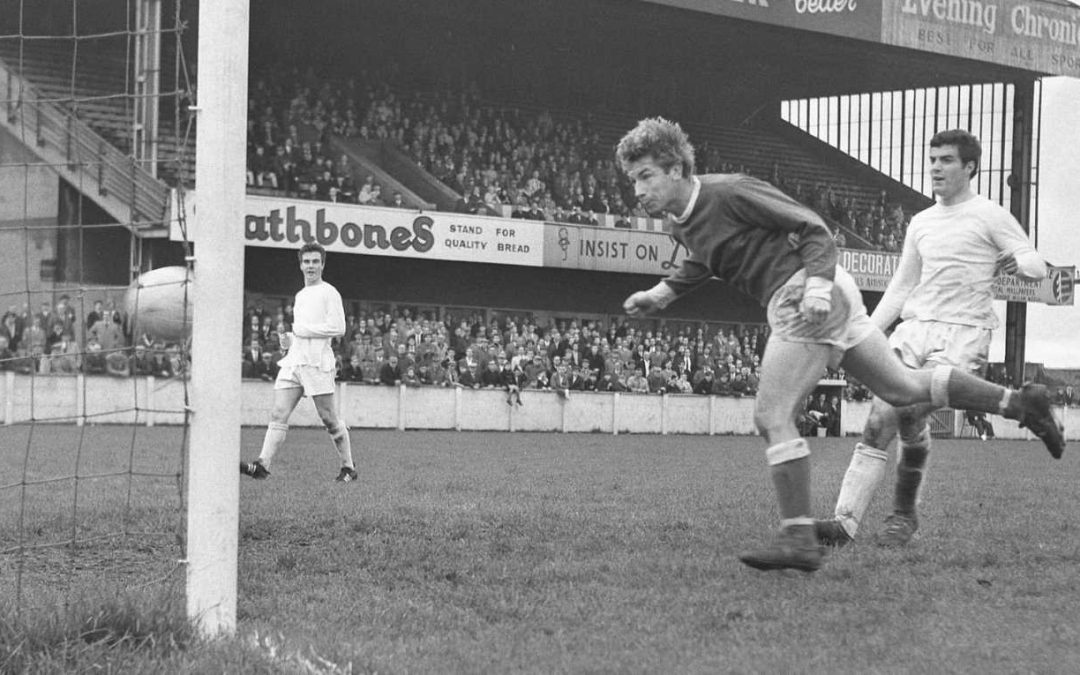 In 1963, Northampton Town, then of the 3rd Division shelled out a hefty £8,000 for prolific Bert Llewelyn of Port Vale. Town were pushing for promotion and manager Dave Bowen felt the fee was justified and that his goals would ensure 2nd tier football.

However, 11 minutes into his debut for the Cobblers, Llewelyn (pictured above scoring for Wigan later in his career) suffered a serious leg injury ruling him out for the remainder of the season. Northampton won the 2nd Division crown without their new star striker’s services as part of their mercurial rise which would eventually see them in the top flight.

Llewelyn however, was destined never to play for the club again. The injury took him a year to recover from and before he played another first-team match he had moved on to Walsall before settling at then Cheshire County League team Wigan Athletic where he became something of a legend scoring 96 goals in 115 games.

Having started his career with Everton, Llewelyn moved to Crewe before joining Port Vale. He finished his senior career with 192 goals in 327 games. 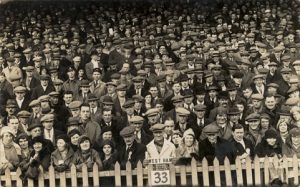 In the 1932-33 Brighton & Hove Albion were in the 3rd Division (South), where they had been ever since their entry into the Football League 13 seasons before.

Football League status ensured the Seagulls of a place in the first round of the FA Cup. Or at least it should have. Unfortunately they forgot to apply for exemption and were forced to enter in the qualifying round stage. Due to the error, their FA Cup season began in October with a 12-0 win over Shoreham. Worthing, Hastings And St Leonard’s and Barnet were all comfortably beaten and the team reached the first round proper having scored 32 goals and conceded just 1.

In the competition proper, Brighton overcame Crystal Palace in the 1st round, then Wrexham, Chelsea and Bradford to make it through to the 5th round. The epic journey finally came to an end when after drawing 2-2 at home to West Ham they lost the replay by a single goal.

Eleven FA Cup matches clearly didn’t do their league chances any favours and they finished 12th in the 3rd Division (South) where they were to remain until they finally got promoted in 1958-59, a whopping 39 years after first entering the league!

Pictured above: Fans at Brighton’s FA Cup 5th Round clash with West Ham in 1933 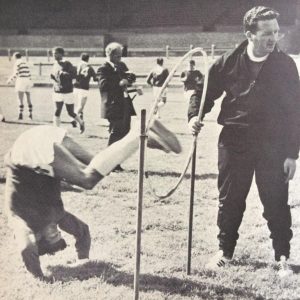 When Newcastle sacked manager Charlie Mitten in October 1961 then Dunfermline manager Jock Stein applied for the post. But the club decided to give long-time assistant Norman Smith a crack at the job.

Stein stayed with the Pars for another three years before moving on to Hibernian and then to Celtic where, of course, he won the European Cup among a welter of trophies (and got this players to jump through hoops for him, witness John Hughes above).

Smith, on the other hand, proved to be not up to the top job and he stepped down from the role (while remaining at the club) was replaced in 1962 by former captain Joe Harvey who also led his club to European success. 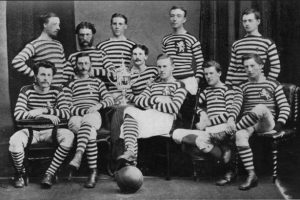 Queen’s Park FC were formed in July 1867 making them the oldest club in Scotland. They played their first match in August 1868 beating Thistle F. C. 2-0.

In November 1872 the club provided all 11 players for the first ever international against England, and they formed the Scottish Football Association, along with eight other clubs, in 1873. They won the first-ever Scottish Cup Final, beating Clydesdale 2-0 at the original Hampden Park, their home ground, and went on to the first three tournaments and did not suffer defeat until December 1876 when Vale of Leven beat them 2-1. In all, they won 8 of the first 13 Scottish Cups. They last won the Cup in 1893 when they beat Celtic 2-1 in a replayed game after the original was abandoned with Celtic one up. 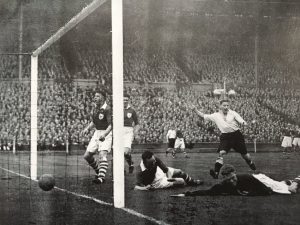 In 1946 Derby County met Charlton Athletic in the first post-War FA Cup Final. Before the game, referee said in a BBC broadcast that the odds of the ball bursting were ‘a million to one’, so of course…

Derby centre-forward Jack Stamps takes up the story; “The ball dropped about two yards from me. I stood with nobody marking me, facing goal and not more than ten yards out. I shaped to Kick the back into the Charlton net. I could not miss it, I thought. Them I saw that the ball was running away from me. I just managed to get my toe to it. I saw Sam Bartram catch the ball, take a quick look at it and throw it over the touchline behind his goal.”

The incident, and the missed opportunity, didn’t affect the result with Derby running out 4-1 winners after extra-time the 1-1 score at full time was all the work of Charlton’s Bert Turner, the Welshman having scored for his own team and the opposition.

The teams met again five days after the final in a league match, and the ball burst again!

Above: Bert Turner’s own goal gets past a despairing Sam Bartram.