An Evening With Gordon Banks

The strength of a great football team starts right at the back. Although England is renowned for producing top goalkeepers there is, of course, only one who has won a World Cup. That man, Gordon Banks, was celebrated recently by the Stoke City Old Boys Association who staged ‘An Evening with Gordon Banks’ at the Britannia Stadium.

As well as a World Cup winners medal, Gordon reigned supreme in the England goal for a ten-year period, representing his country on 73 occasions and also making over 500 appearances during a football league career split between Chesterfield, Leicester City and Stoke City before being forced to retire after losing the sight in his right eye in a car accident.

The evening at the Britannia was a roaring success, following a similar night last year in honour of another Stoke legend, George Eastham. With a huge number of former Stoke players there to honour Gordon the main event was a thoroughly entertaining Q&A with former teammate Terry Conroy asking the questions where the great man relived some of the highlights – and lowlights, of his career. 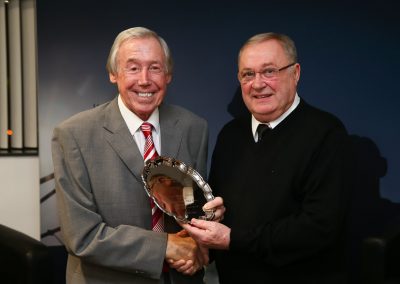 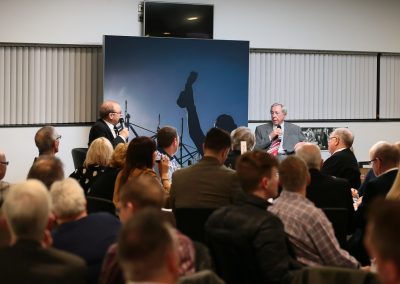 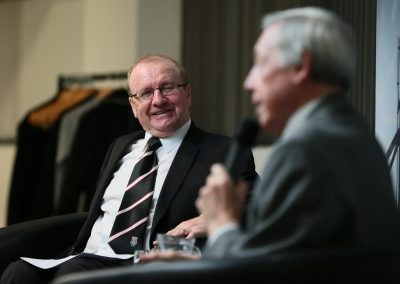 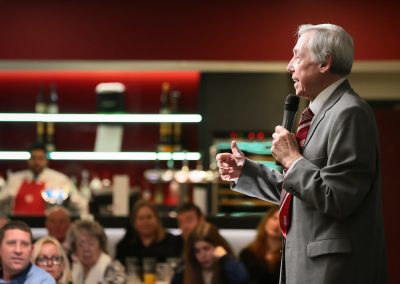 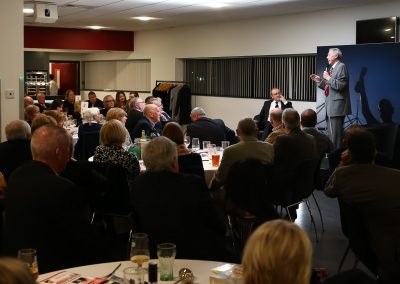 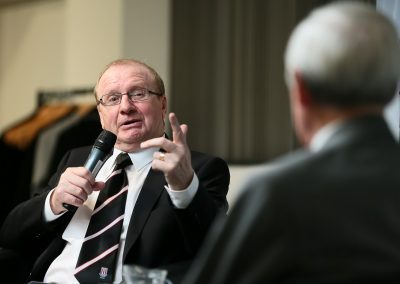 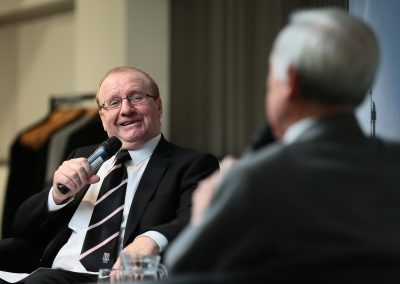 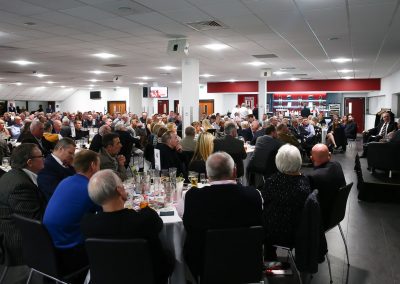 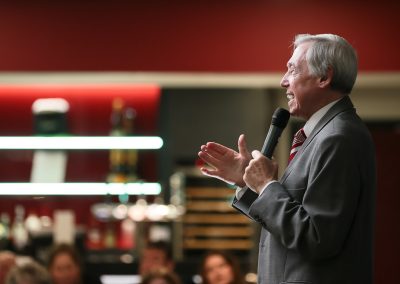 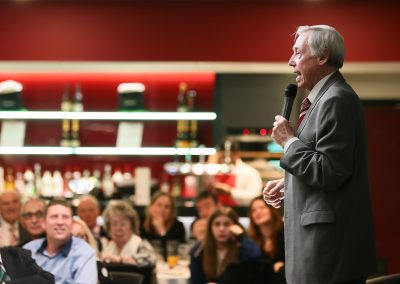 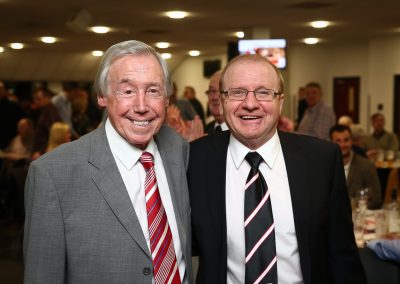 The Sheffield-born man started out when he went to watch local club Millspaugh and was asked to go in goal when their ‘keeper failed to show up. He moved on to another, stronger, local club Romarsh Welfare and his debut would definitely feature among the lowlights, a 12-2 defeat. After the match, he was approached by the manager ‘Are you on the phone Banks’ he recalls the boss asking. When he replied that he wasn’t he was told ‘Good, we’ll give you a call if we want you again’

But Gordon kept at it, his perseverance paying off when he was offered a trial, and then a part-time contract, at a princely £2 per match, with Chesterfield, a club that has forged a reputation as a breeding ground for top-class custodians.

The season after he joined, Chesterfield reached the FA Youth Cup final where Banks faced Bobby Charlton and Manchester United. A 4-3 defeat in front of 32,000 fans at Old Trafford gave Gordon some big-time exposure but this was followed soon after by a call-up for National Service.

Upon his return to civilian life Gordon signed a full-time deal with Chesterfield, a £17-a-week but he didn’t spend too much time with the Spirerites, Leicester snapping him up for £7,000 after just 23 games. Performances for the Filbert Street club put him much more into the limelight but it wasn’t until Alf Ramsey took over as England manager that he earned a call-up to the national team.

Following a 5-2 defeat in France, Ramsey dropped Ron Springett and promoted Gordon for the home international match against Scotland. It certainly wasn’t the debut he might have hoped for, the Scots, spurred on by Jim Baxter, running out 2-1 victors. Next up – World champions Brazil where a 1-1 draw was a creditable outcome.

On the club scene, Gordon reached two FA Cup finals with City, and added a League Cup winners medal to his growing haul.

Now settled into as the national team Number one, Gordon carved out a remarkable record for his country. Playing a total of 73 games for England – of which they lost just nine, he conceded only 57 times and during his country’s run to the 1966 World Cup final, he kept clean sheets in the first four matches before conceding from the penalty spot when Eusebio scored for Portugal in the semi-final, a game he calls his ‘No. 1 England classic’

Before that pulsating semi, England had faced an Argentina side who did their best to turn the quarter-final into a real battle. But the England manager and his men knew what to expect. Before the game, recalls the keeper, Ramsey said to Nobby Stiles ‘you’re marking Rattin today’ to which Nobby replied ‘just today boss? Not for life?’. England won 1-0 with Rattin, a man Gordon claims ‘would kick his own father… If he knew who he was’, sent off.

Then onto the Portugal classic, and then to that memorable day almost 50 years ago when Ramsey’s men claimed the World Cup for the first, and still only, time. And their reward? ‘We got £1,000 each’ recalls Gordon. “The Germans got £7,000 and a Mercedes each for finishing runners-up”.

What came next shocked football. Within ten months of that World Cup triumph, Leicester City, confident a promising Peter Shilton could hold down the first-team job, decided to put Gordon on the transfer list. Despite interest from Liverpool and others, he decided to stay in the Midlands, moving to Stoke for £50,000.

When 1970 came around England still relied on the core of the ’66 team. The second group game saw the holders take on favourites Brazil in a game which is remembered to this day for the ‘Save of the Century’. Having been told before the match by Ramsey that he had been awarded the OBE, Gordon went out and put on a masterclass of goalkeeping highlighted by an incredible save from a Pele header.

An inch perfect cross from Jairzinho saw Pele rise and power a bullet header towards the bottom corner. In his autobiography ‘Banks of England’ Gordon takes up the story: “Pele got above the ball and powered it low and hard towards the corner of the net. It was the perfect header. I was now into a dive to my right and as the ball hit the ground just in front of my goal line I flicked it with my outstretched right hand as it came up”.

Somehow, as Pele shouted ‘Goal’ the strength of Gordon’s ‘flick’ managed to get the ball up and over the crossbar. Speaking recently the great Brazilian, referring to the save, said ‘I scored over 1,000 goals in my career but I get asked more about one I didn’t score than all of those I did’.

But England’s defence of their World crown came to an end a week later in Leon when, without their first-choice goalkeeper who was suffering from food poisoning, they slumped to defeat against West Germany with replacement Peter Bonetti struggling. Gordon became ill the night before the game, suffering from food poisoning but was hopeful of recovering enough to take his place. However he suffered again on the way to the stadium and Alf Ramsey’s team, despite racing into an early lead, were undone by poor tactical decisions and a reserve goalkeeper who was clearly under-prepared.

Gordon continued to perform at the peak of his powers and in 1972 played a major role in the Stoke’s League Cup success, still City’s only major trophy, and he finished that season with the Footballer of the Year award (only the second goalkeeper to take the trophy after Bert Trautmann).

Tragedy was to follow however, shortly after the 72-73 season got underway. Returning from the training ground after treatment for an injury, Gordon was involved in a serious car accident which cost him the sight in his right eye. He tried in vain to return to first-team action but eventually realised he was fighting a losing battle and, despite a brief comeback with Fort Lauderdale Strikers in NASL, the accident effectively brought an amazing career to an end.

Attempts at coaching never really worked out and an unhappy spell as boss of Alliance Premier League club Telford United brought an end to his efforts in this area.

Recently, Gordon has been beset by ill-health with kidney cancer being his most recent battle. Having had a tumour removed from his stomach during his Leicester days, and having had numerous other surgeries for he lost one kidney to cancer and was recently informed that he was suffering from it in the other kidney. “Obviously they couldn’t take the other one away so I’ve been having chemotherapy” he said. The treatment is ongoing and I’m sure football fans all over the world will be wishing the great man all the best in his latest battle.

With the national team’s ongoing struggles, England’s only visit to the pinnacle of World football is becoming more and more distant, and a return trip seems less and less likely. For those of us lucky enough to have seen Gordon Banks at the peak of his powers, an evening spent being reminded of those great times is definitely something to cherish.

Thanks for the memories Gordon! 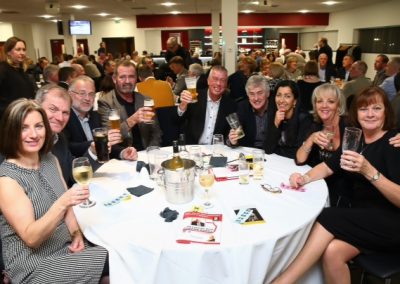 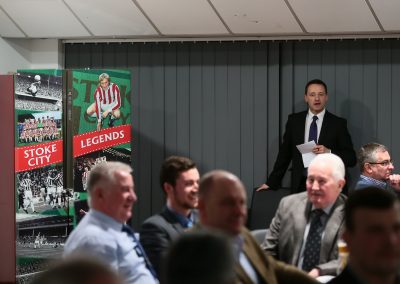 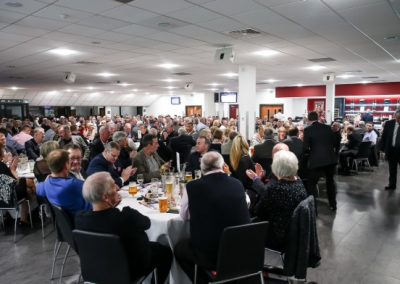 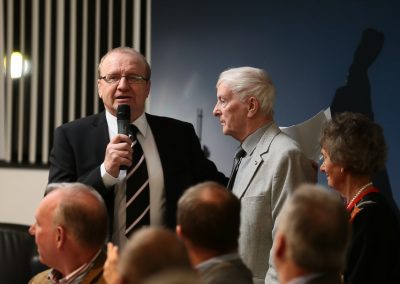 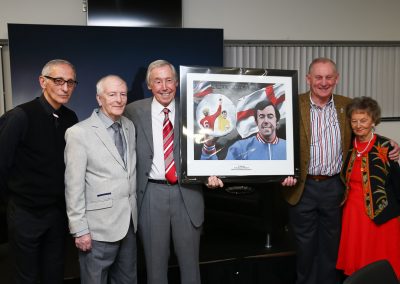 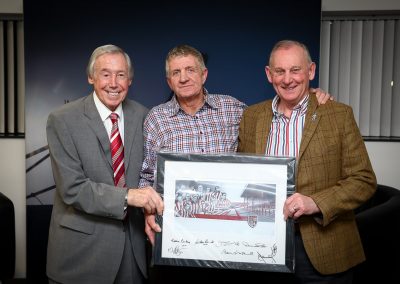 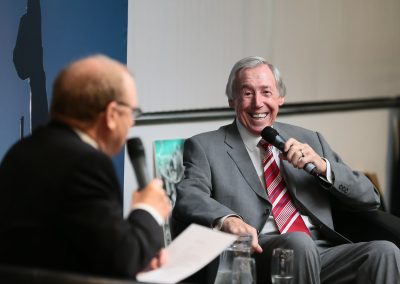 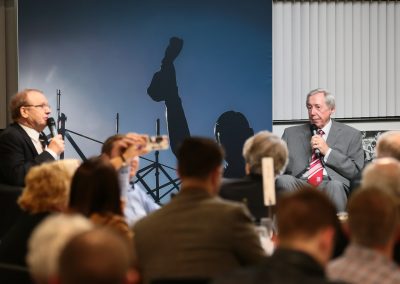 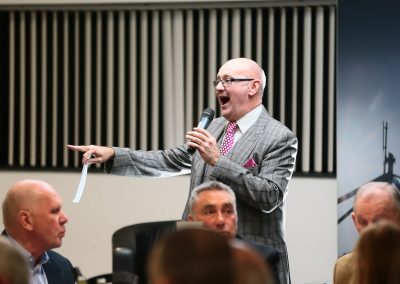 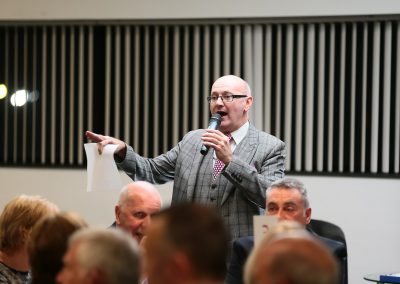 For more information about Gordon visit his website www.gordonbanks.org where you can buy the book Banks v Pele. The Save That Shook The World.

On attending the event at the Britannia we entered the raffle and we’re lucky enough to win a football signed by all of the Stoke City legends in attendance. We’ll be giving this away to one lucky reader. Simply tweet us @theleaguemag using the hashtag #stokeball to enter. 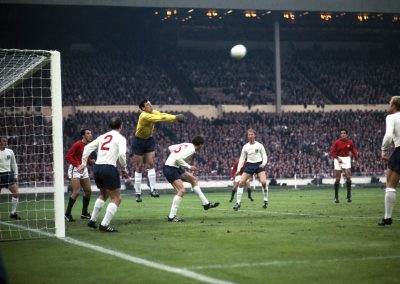 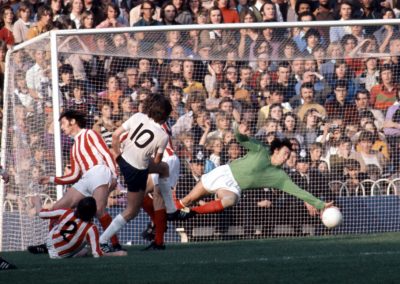 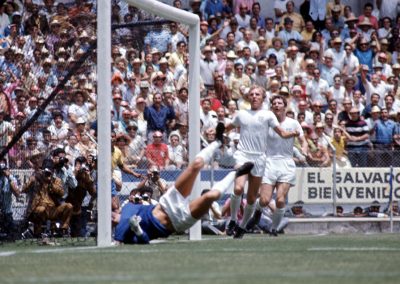 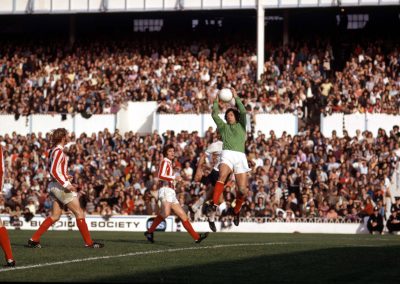 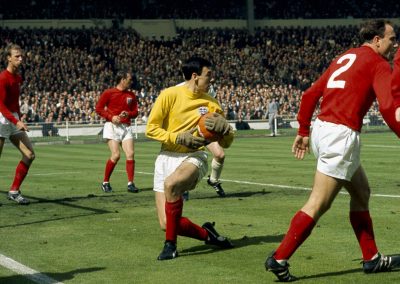 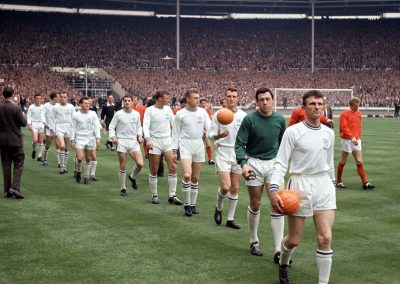 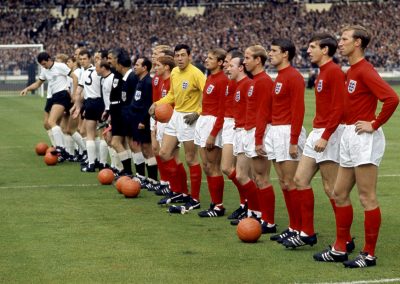