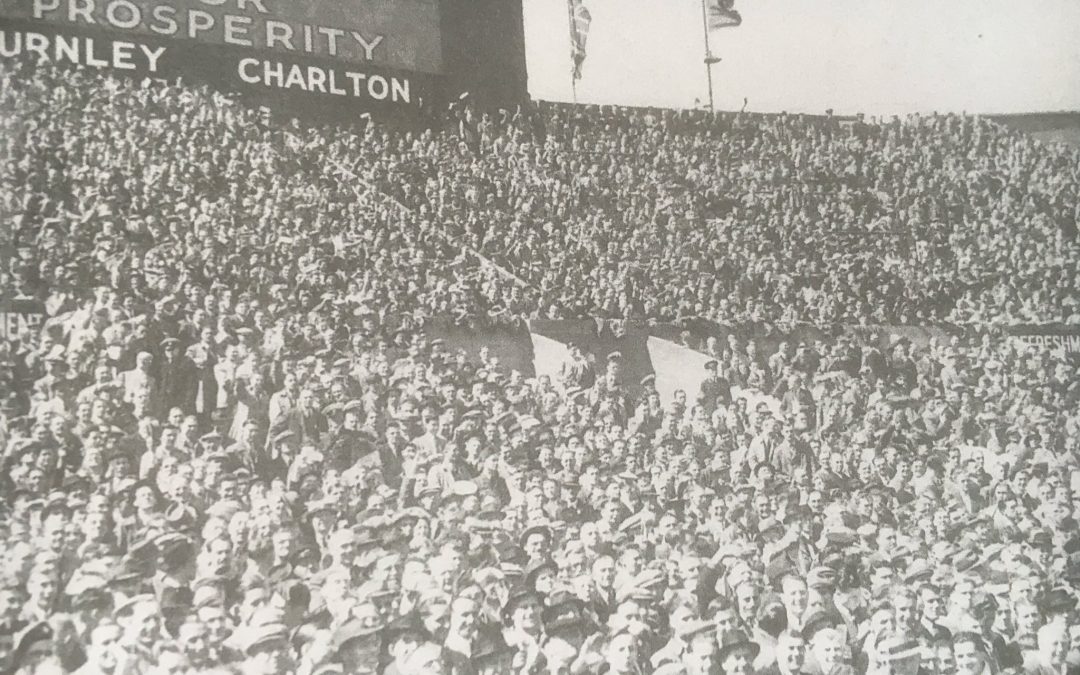 The 1947 FA Cup final saw Charlton Athletic return to Wembley just a year after the heartbreak of an extra-time defeat to Derby County. This time they prevailed in the extra period, breaking 2nd Division Burnley’s hearts with a 114th minute goal from Scot Danny Duffy.

With Football now back in full swing after the 2nd World War, crowds were flocking to matches like never before. 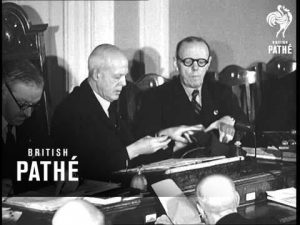 The 3rd Round draw is made

The early rounds of the competition were disrupted by a ‘big freeze’ with a number of matches postponed as fixtures piled up in a season that would run until early June. Unusually for an FA Cup there were few shocks in the early stages. First division Sunderland were ousted by high-flying 2nd Division Chesterfield at Saltergate whilst a top-flight London derby between Arsenal and Chelsea went to a second replay at White Hart Lane where almost 60,000 watched the West Londoners prevail over their North London rivals 2-0 thanks to a brace from Tommy Lawton. 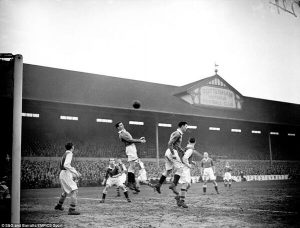 Action from Chelsea’s win over Arsenal at White Hart Lane

Eventual finalists Charlton and Burnley both made fairly straightforward progress in the early stages. The South Londoners were made to battle hard against Rochdale in the 3rd Round, with Eric Lancelotte’s goal being pegged back by Eric Wood. Late on Danny Duffy’s provided a pair of strikes to clinch their passage. Manager Jimmy Seed said after the match that; “Duffy’s speed did the trick”. for his team.

Duffy would, time and again, prove to be the key to Charlton’s progress. A tricky Scottish winger, he had arrived from Leith Athletic for the princely sum of £330 in 1945, having appeared for the club as a ‘guest’ in the 1944 War Cup Final (South) against Chelsea.

Athletic followed that up with hard fought wins at West Bromwich Albion and at home to Blackburn Rovers, both by one-goal margins. Duffy and Bill Robertson got the goals that saw off Albion 2-1 while Tommy Dawson’s winner against Rovers came with just 13 seconds remaining.

Meanwhile, Burnley thrashed top-tier Aston Villa 5-1 at Turf Moor with two goals apiece from Jack Morris and Ray Harrison and one from future manager Harry Potts before seeing off Coventry City and, after a replay, Luton Town thanks to a hat-trick from Harrison.

In the quarter-final Burnley travelled to another 1st Division club, Middlesbrough, where, in front of 53,025 fans, a Jack Morris goal earned them a draw. They then won the replay, with just under 50,000 attending at Turf Moor, thanks to another Morris goal.

56,340 packed into The Valley to see Charlton take on Preston North End in their quarter-final. Duffy was again the star for the Addicks, firing them into the lead after 22 minutes. Billy McIntosh equalised for the Lancashire side just before the break. Charlton’s winner came in controversial circumstances11 minutes after the restart. Charlie Revell headed down a cross and Gordon Hurst turned it home with the Preston defence claiming that the ball had gone out of play before being delivered into the area. At home in bed with pleurisy, manager Seed missed the match and had to listen to commentary on a telephone line. Speaking to reporters later, he said; “The team fought hard throughout and, although not skilful, just about deserved to win on account of their fighting ability”.

The other quarter-finals were won by league leaders Liverpool and another 2nd Division team, Newcastle United and the semi-final draw kept alive both second-tier teams hopes of reaching the final with Burnley drawn to play Liverpool and Newcastle paired with Charlton. 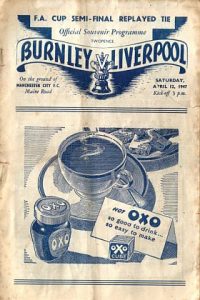 The semi-final replay at Maine Road

Lancashire rivals Burnley and Liverpool did battle at Ewood Park where 53,000 saw a goalless draw. The replay –  the Clarets’ third in a row – took place two weeks later at Maine Road and this time 72,000 were present to see Burnley shock the Champions-elect with a goal from centre-forward Ray Harrison, by far the most important of the 19 goals he scored for the club in 60 appearances.

The other semi proved much more straightforward although it might not have seemed like that on the morning of the match. The Charlton team awoke in their Leeds hotel with a number of players reporting the symptoms of food poisoning. Club doctors worked furiously to get the players ready for the afternoon whilst manager Jimmy Seed worked hard to ensure that news of the bug didn’t reach the Newcastle team.

Seed succeeded and so did Charlton, hammering four without reply past Newcastle as strikes from Tommy Dawson and Gordon Hurst sandwiched a brace from skipper and England international Don Welsh who collapsed unconscious after the game as the bug took him down.

Fortunately for Charlton there was a month between the semi and the final which proved sufficient for the illness to clear its way through the club and allow manager Seed to choose from an almost full-strength squad. Right-half Charlie Revell who was declared unfit the night before the match by trainer Jimmy Trotter was the only absentee. Revell’s replacement was youngster Bill Whittaker who had made only a handful of first-team appearances – and none in the Cup. 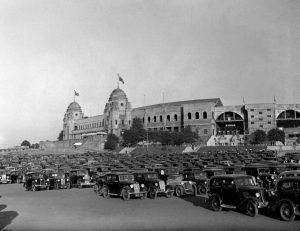 Wembley on the day of the big match

Surprisingly, the official Wembley attendance for the final, staged on 26th April 1947 and the first to be shown live on television, was 98,215, slightly under the stadium’s capacity. The Addicks, after the previous year’s heartbreak, were becoming the first London team to appear in back-to-back finals. 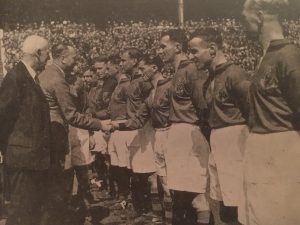 The Duke of Gloucester meets the Burnley players

Both teams were skippered by men who would go on to have long, successful managerial careers; Don Welsh, who led Charlton out and who would eventually collect the trophy later went on to manage Brighton & Hove Albion, Liverpool, Bournemouth and Wycombe Wanderers while opposite number Alan Brown would go on to manage Burnley (before being replaced by final teammate Potts), Sunderland (twice) and Sheffield Wednesday.

Potts was enjoying his first full season with the Clarets and the inside-forward finished top scorer with 15 goals. He remained at Burnley until 1950 when he left to join Everton. After retiring in 1956 he took up the managerial post at Shrewsbury Town before being lured back to Turf Moor in 1958 where he would spend the next twelve years, followed by a further two year spell from 1977-79, at the helm.

In the Manager’s role Potts led the team out at Wembley in the 1962 FA Cup final as well as guiding the Clarets to the 1st Division title in 1959-60. 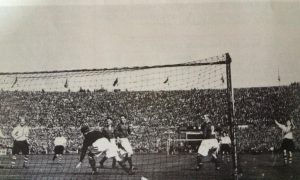 The game itself was expected to be a dull, defensive affair and so it proved with rearguards well on top In stifling heat (referee Jim Wiltshire started the game five minutes early after seeing both teams were ready to go). By the time extra-time was reached the game was mostly being played at a walking pace with both teams seeming to have settled for Wembley’s first drawn final. Then, in the 114th minute Billy Robinson, whose wife had given birth just an hour before kick-off (unknown to him) beat Mather, the Burnley left-back and crossed for Welsh who laid the ball off to Duffy who smashed home a spectacular winner, givimg Charlton compensation for the previous year and sending Welsh up the famous steps to collect the trophy from the Duke of Gloucester. 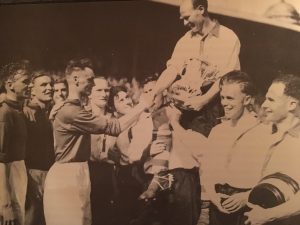 The Burnley players congratulate their conquerors

Writing after, the great Alex James said: “This must be one of the dullest games ever on Wembley’s great arena”. But that mattered little to Seed and his men who had gained redemption for the previous year’s loss. 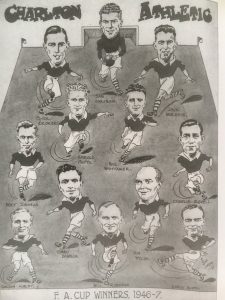 A Cup winners medal was a fitting reward for Charlton goalkeeper Sam Bartram. Considered by many as the finest ‘keeper never to appear for England (although he did play in three wartime internationals), the South Shields-born Bartram, discovered for Charlton by manager Seed’s younger brother Angus, would go on playing for Athletic until retiring at the age of 42 in 1956 having made over 600 appearances for his only club (again, excluding wartime).

For the runners-up, consolation would come with finishing the season in second place in the 2nd Division to Manchester City, thereby earning promotion to the top flight where they would remain for 25 years