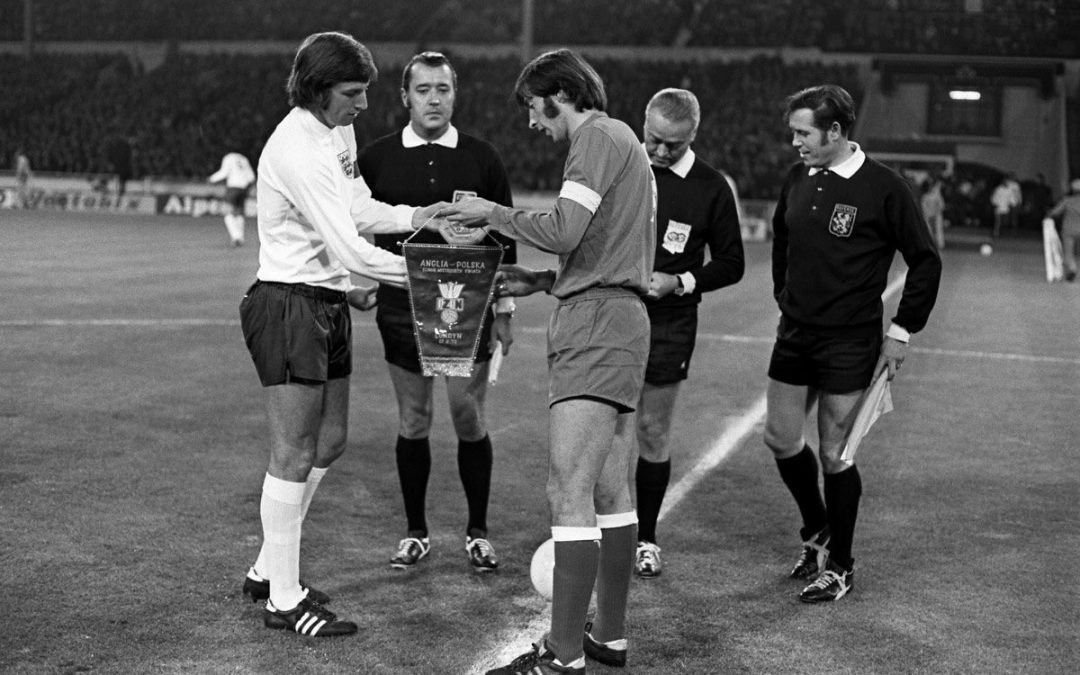 After memorably winning the World Cup in 1966 and putting up a brave show in the 1970 tournament, the qualifying draw for the 1974 staging in West Germany seemed to have given Sir Alf Ramsey’s men an excellent chance of making the finals again. Placed in a three-nation group alongside Wales and Poland they seemed set fair to reach the finals again.

But by dropping points in a home draw with the Welsh and in a 2-0 defeat to the Poles in Chorzow, the teams hopes were in the balance with nothing less than a win in the final game against Poland at Wembley good enough to make the finals. 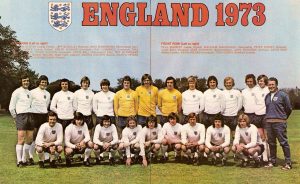 On 17th October 1973 the final, crucial match took place. When Belgian referee Vital Loraux blew the final whistle in front of over 90,000 fans, not only did he signal the end of an amazing game, he also brought down the curtain on a very special era for English football. Only seven years earlier Sir Alf Ramsey’s team had beaten West Germany 4 – 2 in the same stadium to actually become World Champions and failing to qualify for the 74 finals was a disaster. The knock-on effect was huge and it also cost the manager his job with the FA terminating his contract not long after the game. Bobby Charlton at the time was reported as asking how could you sack a Sir, but sacked he was and little did we know at the time that it would also be another nine years before an England team would once again be strutting their stuff in a World Cup Finals

The game itself was astonishing, it was like forwards against backs for most of the night. The forwards in this case were England and they threw everything at Poland to try and get the win they needed to advance. The Polish side were very well organised and seemed to come to Wembley to sit back and absorb everything England threw at them and maybe take a chance on the break, after all they did not need to win the game. 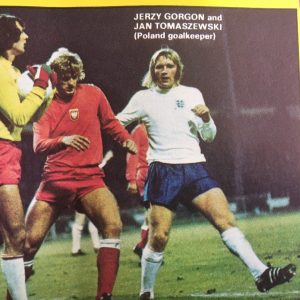 The way England, skippered by Martin Peters the only surviving member of the 1966 winning team, were pressing on the night it was only a matter of time before they took the lead, although shots were raining in from all angles it was becoming difficult to just get one into the net, the Polish goalkeeper on the night was an unknown 25-year-old lad called Jan Tomaszewski. His name is now written in football folklore and his performance on the night is arguably one of the best, if also luckiest, displays ever to have been seen at Wembley. He was making saves with his feet, elbows and his hands and on two occasions England hit the post, it was even more astonishing when after the game the big Pole admitted he had broken a couple of fingers early in the game when he was challenged by an England player.

On the night Brian Clough was working for ITV and at half time he branded Tomaszewski a clown,; nothing could have been further from the truth. In fact just before ITV handed the commentary back to Hugh Johns before the start of the second half Mr. Clough advised the country to sit back and put the kettle on, as the goals would soon come.

Goals did come but to everyone’s horror it was the Poles who took the lead in what can only be described as a disaster for Sir Alf’s side. The goal came when Robert Gadocha broke down the wing and when he got to the halfway line he was met by the late Norman Hunter who normally would have put his opponent into row Z. But on this occasion Norman got himself and his feet into a total tangle and Gadocha got away and played a pass into Domarski on the right wing, whose shot went under Peter Shilton’s body. The England keeper later said he tried to make the perfect save and got it so wrong. Poor Norman was distraught after the game and took a long time to come around from his part in the goal. In fact he later described the incident as ” the worst moment of his career “.

Eight minutes later when Martin Peters went down in the penalty area and the referee pointed to the spot England had a lifeline. Allan Clarke stepped up to take the kick and coolly found the corner of the net to make it one all. 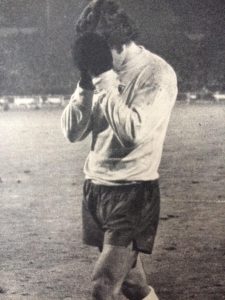 Peter Shilton at the final whistle

It was just one of those nights and a lot of people felt so let down, but one result did not stop England qualifying. It was the defeat in Poland and the draw at home to Wales that put qualifying on a knife edge before that fateful night in October. 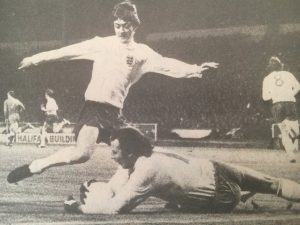 Jan Tomaszewski saves at the feet of Allan Clarke

In later years I was lucky enough to meet and talk with Allan Clarke about the Poland game and although Allan had been retired many a long year, you could still feel his disappointment. I interviewed Allan for a Leeds United event in Dublin and when it got around to memory matches we briefly touched on the 1972 FA Cup Final but I moved the conversation to that famous night against Poland and he was only too willing to discuss the game. It was just one of those nights when nothing would go in not matter what they tried, he particularly remembered the point in the game when he took a shot which was heading into the top corner of the net only to see it clawed away by Tomaszewski. Clarke was sure it was in and reeled away with his famous one arm up in the sky to celebrate. He was astonished not to see the ball nestling in the net and he knew then it was not to be England’s night. 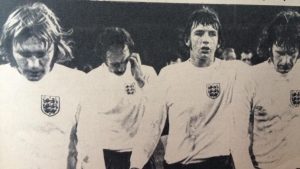 So, the game ended in a draw as we know, but the fall out was far worse as we later found out when Sir Alfred Ramsey was sacked, the man who had managed the 1966 World Cup Winners had been removed from office and English football was to change forever.

It didn’t come immediately but after the defeat everyone accepted that Ramsey was living on borrowed time. On 1 May 1974 he was officially sacked as England manager. After speculation that the role might be offered to Gordon Jago, Gordon Milne or Jack Charlton it was Don Revie, so successful at Leeds United, who took over. But after missing out on qualification for the 1976 Euros and the 1978 World Cup, he too was gone.

Ramsey eventually returned to the game at Birmingham City, managing the club for a 26-match spell and then acting as consultant for Greek club Panathinaikos for the 1979-80 season before retiring. He passed away in 1999 at the age of 79.

Meanwhile Poland would prove their performances in qualifying were no fluke. At the 1974 World Cup they topped a group that included Argentina and Italy with a 100% record then beat Sweden and Yugoslavia in the 2nd Round before losing their last match 1-0 to eventual winners West Germany. In the 3rd place play-off they beat Brazil 1-0 with a goal from tournament top scorer Grzegorz Lato.

So, clearly, that result in October 1973 wasn’t as bad as it might have looked at the time. But an amazing football match clearly had a seismic effect on English football.