BOBBY BUCKLE – THE FATHER OF SPURS 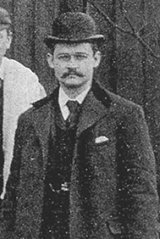 White Cottage is where it all started. From this came Tottenham Hotspur FC, the name ‘White Hart Lane’ and the club’s first key man

The full address was White Cottage 7 White Hart Lane and it was the home of one Robert (Bobby) Buckle.

Buckle, born in 1868, was one of the creators and original members of The Hotspur Football Club, the team founded by schoolboys from St John’s Middle Class School and Bobby’s school Tottenham Grammar School.

The boys, aged 13 and 14 had already been members of Hotspur Cricket Club (the name came from Shakespeare’s ‘Harry Hotspur’), formed two years before and, wanting something to do when the weather got too bad to play the summer sport decided to set up the football club in 1882.

Buckle, John Anderson and Hamilton Casey were the men behind the creation of the club and they asked the 21 members to pay an annual subscriptions of 6d commencing in September of that first year. Augmented by a donation from the cricket club, the first money was used to buy wood for goal and corner posts. 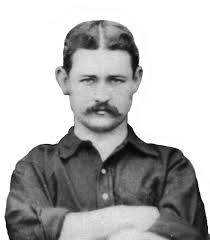 Buckle, a left-winger, was chosen as the new team’s first-ever captain and scored their first-ever goal. This came in a 3-1 loss to Grange Park on 20 October 1883 a week after the first match, a 2-0 loss to Radicals. By this time they were already being referred to as Spurs in local press reports.

1885 saw a number of major changes. Then-Secretary Sam Casey had been receiving correspondence intended for another club, London Hotspur, so it was decided, for clarity to differentiate the club from their near-namesakes by adding Tottenham to the start of their name and thus Hotspur became Tottenham Hotspur.

Next was the kit colour. Then team had originally worn navy blue shirts with a scarlet ‘H’ and white breeches but they changed to blue and white halves, influenced by Blackburn Rovers wearing the colours for their FA Cup final win over Queen’s Park at Kennington Oval.

They would change again frequently before the turn of the century, first back to dark blue, then to red, then to chocolate and gold stripes before finally, and permanently, settling on white shirts and navy blue shorts in 1900 after an FA Cup game against Preston.

The club were also evicted from their original HQ, the basement of a YMCA, after a member had been struck by a soot-covered ball. Club chairman John Ripsher, a church warden, organised a move to a new base, a church-owned property but the club were also evicted from there when some of the members were caught playing cards. They then settled on a third premises, The Red House on Tottenham High Road. 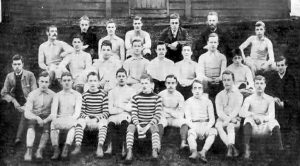 1885. Buckle is second from left in the front row

Having started out as a schoolboy team competing in friendlies where results were often disputed, teams often played without a full XI and matches were sometimes only an hour long, Tottenham Hotspur gradually added older players and in 1885 they played their first-ever competitive match, beating St Albans (a City of London ‘Beer House’ team) 5-2 in the London Association Cup in front of an estimated 400 spectators on Buckle’s 17th birthday. They travelled to Wandsworth to play Casuals, probably the best team in London, for their next match in the tournament and were hammered 8-0. The overall record for the season was P37 W22 D4 L11.

Back to the football and in 1886-87 the team reached their first cup final, seeing off Phoenix, Park,  St Lukes and Enfield Lock to reach the final of the East End Cup which they lost by a single goal to Caledonians played at their then home ground on Tottenham Marshes.

The Marshes was home for another two seasons but this was a public ground meaning they were unable to charge for admission. It led to fans sometimes encroaching on the pitch and there were cases of opposition players being pelted with ‘rotten turnips and other vegetable refuse’. To combat this and to increase revenue by being able to charge admission fees in 1888 they rented a ground, which Buckle along with teammates Sam Casey and Jack Jull had identified at Northumberland Park for £17 per annum. This would lead to a considerable upturn in the club’s financial fortunes and in that year they recorded a profit of £6.

The 1889-90 season saw the club join the Football Association. They continued to do ok in local matches but found it tough when going up against better opposition and suffered early defeats in the Middlesex Cup and London Cup to Clapton and Old St Stephens respectively.

It was in 1892-93 that Spurs first played in a competitive league. Friendly matches were becoming repetitive and failed to attract decent crowds so the club joined the newly-formed Southern Alliance. They did well, finishing 3rd in the league but after a number of problems the Alliance was disbanded at the end of its one and only season.

The next major change at the club came in 1895 when Buckle, who had stopped playing for the 1st team earlier that year and was now in the role of secretary, proposed that they turn professional, a proposal which was passed. After an attempt to join the Football League failed they joined the Southern League for the 1896-97 season finishing a creditable 4th and also making it as far as the 3rd Qualifying Round of the FA Cup.

Tottenham Hotspur Football Club Limited came into existence in 1898 with Buckle as one of the first directors and with the document forming the legal company bearing the name and address ‘Robert Buckle, Tottenham Hotspur, White Hart Lane’ in reference to his home address. 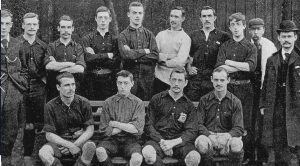 On Good Friday 1898 a game against Woolwich Arsenal attracted a record crowd of 14,000 and the refreshment stand collapsed under the crush of people. Although no serious injuries were sustained it was becoming clear that Northumberland Park was no longer big enough for the ambitious club and in 1899 they moved a short distance to land owned by Charringtons Brewers behind the White Hart pub.

After originally leasing the new ground, where the first game was a friendly against Notts County in September 1899 attended by 5,000, they built a stand on the west side before buying the freehold for £8,900 in 1905, along with a further piece of land at the North End for £2,600.

Although it was never officially called ‘White Hart Lane’ the name soon became synonymous with the club and the team now dubbed ‘The Flower of the South’ in the press quickly settled into their new home winning the Southern League in 1900 and, famously, the FA Cup in 1901. 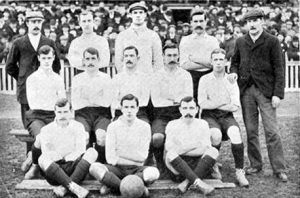 In 1900, after being one of the club founders, playing in the first match, scoring the first goal, moving to accept the name change to Tottenham Hotspur, being part of two relocations, being the first secretary of the limited company, giving the club their home address, overseeing the transformation to professionalism and serving as player, secretary, treasurer and director, Bobby Buckle resigned from the board of Tottenham Hotspur Ltd after moving to South London.

Aside from the fact that he was a regular, and regular scorer from the left wing for the team and often captain, little is known of Bobby Buckle in terms of football ability. But his credentials as a Tottenham great are undoubted. He was awarded the club’s first testimonial in 1892 and would be a regular on the pitch for 12 years, and was there to propose the toast to the 1901 FA Cup winners at a celebration banquet in the King’s Hall in Holborn. A far cry from the 13-year-old playing with his fellow pupils from Tottenham Grammar School!

But playing was just part of his role in the development of the club. Buckle, who passed away in 1959 at the age of 91 was clearly the key figure in the formation of Tottenham Hotspur and their growth both on and off the pitch and deserves his place as the ‘Father of Spurs’.