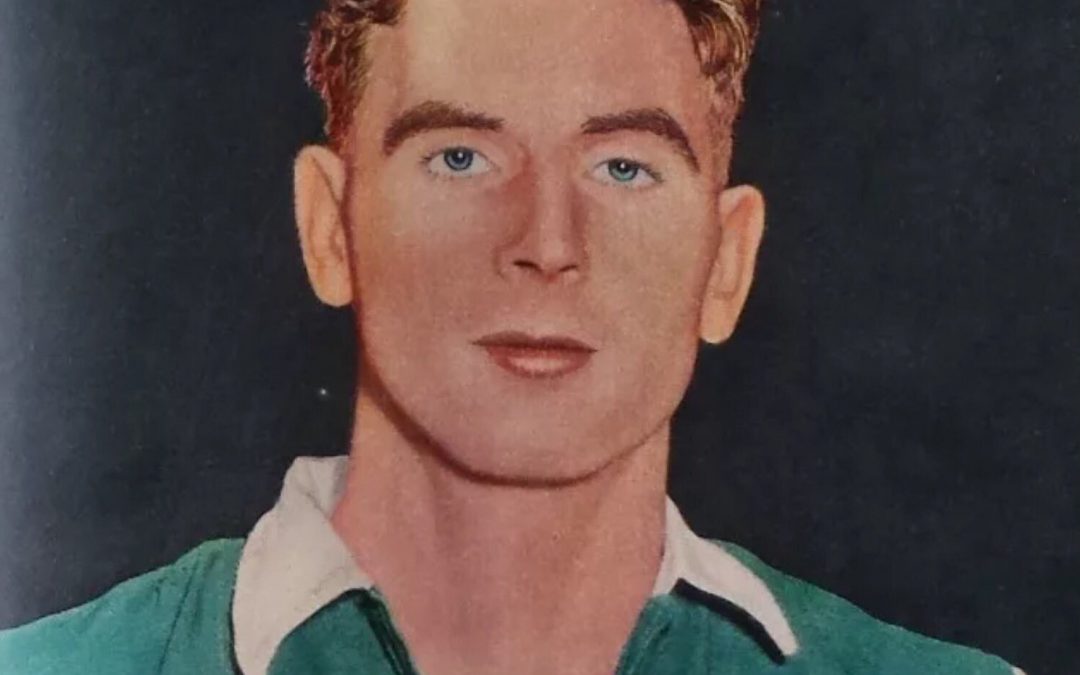 IT is hard to imagine these days but there was a time when Scottish football wasn’t dominated by Celtic or even by the big two from Glasgow.

In the late 1940s and early 1950s it was Hibernian who ruled the roost and much of this was due to a group of players who became known as ‘The Famous Five’.

The five are all now members of the Scottish Football Hall of Fame and they were all hugely influential as Hibs took the title in 1948, 1951 and 1952. 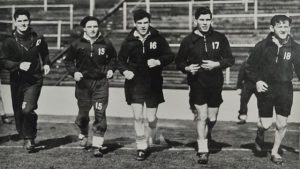 Bobby Johnstone, Lawrie Reilly, Willie Ormond and Eddie Turnbull were all wonderfully gifted players. But if there was one of the five who stood out as a ‘first among equals’ it was Gordon Smith, who became known as ‘The Prince of Wingers’. Not only that but Smith then went on to win the crown with two other clubs.

Smith was born in Edinburgh on 25 May 1924 but spent most of his formative years farther north in Montrose and Dundee where he played for youth teams Montrose Roselea and Dundee North End.

When the chance came for the young Smith to make his mark in the Scottish capital it wasn’t with Heart of Midlothian, the team he had supported as a youngster but Hibernian who grabbed him from under the noses of their city rivals.

Hibernian manager Willie McCartney used all his charm, and the promise of an immediate place in the team, to lure him to Easter Road after both Edinburgh clubs had affirmed their interest.

True to his word, McCartney put Smith in the first team almost immediately. Hearts had wanted Smith to play in a trial match, Hibs offered him a place against their city rivals in an upcoming Southern League match, and a crisp £10 note.

So on 28 April 1941, Smith donned the green shirt with white sleeves and stepped on to the pitch at Tynecastle for his first-ever professional match.

Has there ever been a greater debut? Hibernian won the game 5-3 confirming 3rd place in the league and Smith got a hat trick earning an place in club folklore. He would go on to finish that first season with 20 goals.

A job in the Leith shipyards during the war allowed Smith to continue playing for Hibs on a regular basis (he scored 170 wartime goals that do not ‘count’ officially) but would have to wait five years for his ‘competitive’ debut for the club. The Scottish League resumed for the 1946-47 season. It would prove a campaign of near-misses for Hibs. Pipped to the league title by Rangers who finished two points above them they also lost out in the semi-final of the Scottish League Cup to the Glasgow giants. 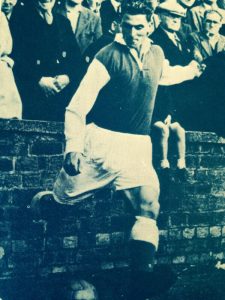 In the Scottish Cup, Hibernian went one better. They saw off Alloa Athletic and Ayr United in the first two rounds both by 8-0 margins before being drawn away to Rangers in the third round. After a goalless draw they overcame their big rivals 2-0 in the replay. A 2-0 quarter-final win over Dumbarton was followed by an extra-time victory over Motherwell to earn a place in the final against Aberdeen.

When John Cuthbertson gave them a first-minute lead in front of over 82,000 fans at Hampden, Hibernian fans would have thought their name was on the trophy. But their opponents fought back with two unanswered goals to deny Smith and his team the crown. 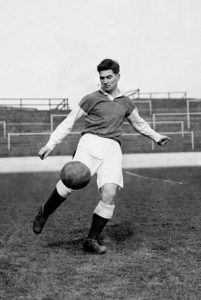 The fine ‘almost’ season was delivered with only three of the eventual ‘five’ in place. Smith, Eddie Turnbull and Willie Ormond were all in the starting line-up that day.  Lawrie Reilly broke into the team when Ormond broke his leg the following season whilst Bobby Johnstone, who completed the quintet, came later, during the 1949-50 season with Bobby Combe moved to half-back to accommodate him.

But even before the five were brought together Hibernian achieved a notable success in the Scottish League capturing the title in 1947-48 although the triumph came tinged with tragedy.

Manager Willie McCartney had joined the club in 1936, moving over from Hearts where he had been in charge for 16 years and where he had taken over from his father.

He had built a side that looked capable of going for the top in the late 1930s but the War came along and scuppered that plan. Undeterred, McCartney carried on building and he spent the war years further fashioning his team, signing Smith and then adding Ormond, Turnbull and Reilly shortly after the end of hostilities.

Shortly after the war ended Smith was chosen for Scotland for the first time. He would go on to make a total of 19 appearances for his country but was never an automatic first choice. 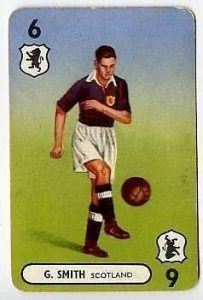 Smith played six times in the immediate post-war years but later Willie Wallace of Rangers was often preferred for the right-wing position in the famous dark blue. ‘Gay Gordon’ was often overlooked and the reasoning behind this was baffling. In 1949-50 for instance he scored 25 goals in 29 games but wasn’t picked for his country once.

Hibernian started the 1947-48 in great style and were top of the table coming into their clash with biggest rivals Rangers in January. The week before, on 24 January they played Albion Rovers in the Scottish Cup, winning 2-0. After the game at Cliftonhill, the manager and ‘father’ of the team McCartney collapsed and sadly passed away later that day. 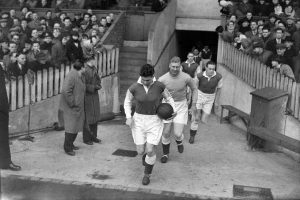 Trainer Hugh Shaw took over at the helm and Hibs won the game 1-0. In fact they remained unbeaten in the league until the last day of the season when, with the title already secured, they lost 3-1 to Dundee. Smith finished as the team’s top scorer with 19 goals as the club captured the crown for the first time since 1903.

Smith, playing in the right-wing, was key to Hibernian’s success. Always comfortable on the ball and naturally two-footed, he was pretty much unstoppable and as capable of scoring goals as he was at making them for others. A sign of his prowess was that Newcastle United, then one of the powerhouses of English football offered a blank cheque for his services. They were politely rebuffed.

Although Hibs failed to retain their title the following year when they finished third, or in the one after when they were runners-up they won it again in both 1950-51 and 1951-52. By now the famous five were in full flow and they were clearly Scotland’s best team.

Such was the reputation of the team at this time, that they were invited to Brazil to take part in the Octagonal Rivadavia Correa Meyer which the Brazilian FA also called ‘The World Club Championship’. Although they failed to make an impression there, Hibs had already been pioneers of foreign travel, taking part in a number of continental tours during the close season so they had some experience of foreign opposition and had also met a number of English teams in friendlies including Arsenal, Tottenham Hotspur and Manchester United – who they beat 8-3 in a 1952 testimonial for Smith in front of over 76,000 at Easter Road. 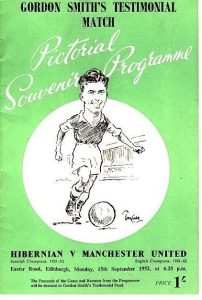 One of the five, Bobby Johnstone, was lost in 1955 when he joined Manchester City but the club found a fine replacement in Joe Baker. But the other top teams in Scotland had improved and the Edinburgh club found themselves having to settle for finishes just off the top.

In the 1954-55 season Hibernian finished 5th in Scotland but when Champions Aberdeen refused an invite to compete in the first-ever European Cup it was the men from Edinburgh who took their place.

The Scots overcame the West German team Rot-Weiss Essen 5-1 on aggregate in the first round and then saw off Swedish champs Djurgården 4-1 in the second. 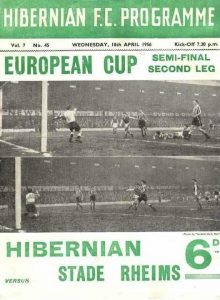 Unfortunately Shaw’s men lost to Reims in the last four to deny them the chance of appearing in the first-ever final.

They managed a run to the Scottish Cup final in 1958 but with both Smith and Reilly (who would be forced to retire at the end of the season) out through injury, they were shocked at Hampden by Clyde.

As the decade came to a close it looked like Smith’s career was doing the same. In the 1958-59 season a recurring ankle injury meant he played just 15 games scoring once and at the end of the campaign, rather then paying for an ankle operation Hibernian gave him a free transfer. 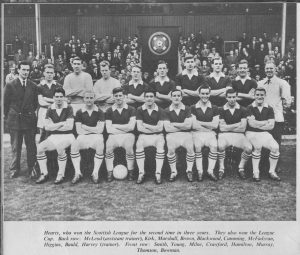 Rather than accept that his next days were gone, Smith paid for the operation himself, spent the summer on the French Riviera getting fit, came home and signed for Hearts. 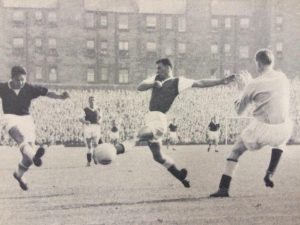 He proved an inspired pick-up for the club he’d supported as a youngster, playing 29 times in the league as they won the league-league cup double. In his second season at Tynecastle the injury problems returned and at the end of it he received another free transfer. 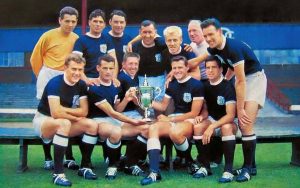 Bob Shankly took the now 37-year-old Smith to Dundee and although his pace was no longer there it was compensated for by his quality on the ball and in his passing. Described in one report at the time as ‘Back to his gayest’, he partnered with Alan Gilzean and played a major role in his new team’s victory in the Scottish League in 1961-62 and in doing so became the only player to win the title with three different clubs (none of them part of the ‘Old Firm’). 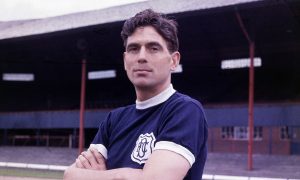 The following season he helped Dundee reach the semi-finals of the European Cup where they lost to Milan.

He finally retired, after a brief spell with Irish club Drumcondra, in 1964 at the age of 40 ending a career that had been marked by both brilliance and longevity. Twice he was given up on, considered past his best, and each time he bounced back to prove those who had decided he was finished wrong.

With a career total of over 300 goals in over 700 games for Hibs, and over 400 goals in over 800 matches altogether (remarkable fingers and even more so for a winger) that quality and longevity is plain for all to see.

Smith spent most of his retirement in North Berwick enjoying regular rounds of golf, his other major love, although he did return to Edinburgh for a while to run a pub near Easter Road appropriately called ‘The Right Wing’.

Gordon Smith passed away in 2004 at the age of 80. To this day, and no doubt forever more he remains a legend at Easter Road and, indeed in Scottish football as a fabulous winger and as probably the most famous of the ‘Famous Five’.