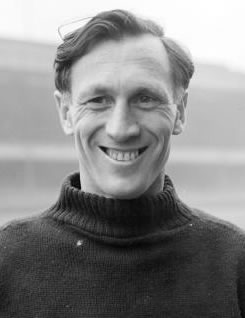 FOR many a true football great is one who has reached the top both on and off the pitch. To have made it to the pinnacle both as a player and a manager is evidence of skill, the ability to have learned from your playing days about tactics and motivation, and the communication skills to pass those lessons on to the players now in your charge.

These greats are few and far between so there really must have been something special about Cambridge Road School in Ellesmere Port which produced not one but two of these footballing icons at the same time.

Joe Mercer and Stan Cullis certainly made their way to the very top as players, representing their country at the highest level. Then after hanging up their boots both turned their hand to management and repeated the achievements produced on the pitch.

Mercer and Cullis both also displayed a great level of pride and loyalty although sadly this was not always returned at the clubs they served so well.

Although their careers were intertwined, a combined article wouldn’t do them justice so we decided to write separately about each. The Stan Cullis Story was posted a few days ago, here is Joe Mercer’s.

Joe Mercer Jr was the eldest son of Joe Mercer who himself was a professional footballer. Mercer Sr was a tough, commanding centre-half and started out with Ellesmere Port Town before joining Nottingham Forest in 1910. He almost signed for Everton but when Toffees manager Walter Cuff went to watch him play he reported back; “He’s a good player alright, but he’d get us thrown out of the league!”

Four months after the start of World War One and a day after the 17th Middlesex, the famed ‘Footballers Battalion’ was formed Mercer travelled down to London with teammates Tom Gibson and Harold Iremonger to enlist.  In 1915 the Battalion was posted to the Western front where he was promoted to sergeant. After suffering wounds to his head, leg and shoulder and being gassed, he was captured at Oppy in 1917 and spent the rest of the hostilities in three different Prisoner-of-War camps before finally being released in January 1919.

When he came home Mercer brought back a football for his 4-year-old son, to whom he was a virtual stranger. He tried to resume his playing career, spending some time with Tranmere Rovers but found it impossible to reach his former level due to the injuries he had suffered. He retired, going back to bricklaying, his original trade. He died, aged 37, in 1927, succumbing to health problems brought about by the gassing he had suffered in the trenches.

Joe Mercer Jr was 12 years old when his father passed away and, following in his footballing footsteps, was already showing great promise. In 1929, aged 15 he was chosen, alongside schoolmate Stan Cullis, to represent Ellesmere Port Boys against Chester. A left-half, Mercer was strong in the tackle and also a great reader of the game and even at this early stage it was clear he had the ability to go a long way.

Mercer admitted later that early experiences on the streets of Ellesmere Port had prepared him well. “The back alleys held some valuable lessons”, he recalled. “For instance, playing with a small ball. If you could control a small ball with certainty, you found later that bringing down a normal ball came more easily. It was wonderful training for the eye”.

Within two years of his appearance for Ellesmere Port schools Mercer signed for Everton, and a year after that, aged 18, he made his debut for the Goodison Park club.

At the time he joined the club, Everton were probably the best team in the league, featuring the likes of Dixie Dean, Warney Cresswell, T. G. Jones, Cliff Britton and Ted Sagar among others. With such a strong line-up it is little surprise that it took Mercer a while to break into the first team but he bided his time and learned valuable lessons from his more experienced teammates.

In the 1935-36 season Mercer finally became a regular forming a strong wing-half partnership with the aforementioned Britton. From then until the outbreak of war, Mercer made the left-half position his own and in 1938 he earned the first of a pitifully small total of five England caps (although he also made 26 wartime appearances, many as captain) when playing in the 7-0 win over Northern Ireland at Old Trafford. 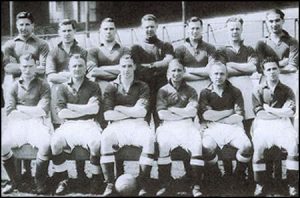 The 1938-39 season was a fine one for Mercer, and for Everton. Not only was he now an established England player, his team, with him at the heart of things and Tommy Lawton banging in a division-leading 35 goals, won their fifth title.

Lawton later said of his teammate; “Joe Mercer was a tremendous tackler, timing his interventions perfectly, and he loved nothing more than to bring the ball up and take part in an attack with his forwards.

“He had deceptive speed, but then Joe was a deceptive player, probably due to those bandy legs of his”.

What could easily have become a team that dominated football was ruined however when League Football was suspended with the outbreak of the World War Two. 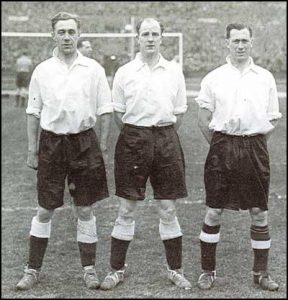 On the outbreak of war, Mercer was among the many top players invited to become a Physical Training Instructor at Aldershot. There he played alongside many of the leading players of the time for Aldershot, including forming an imposing half-back line (as pictured above) with schoolboy pal Stan Cullis and Everton teammate Britton. 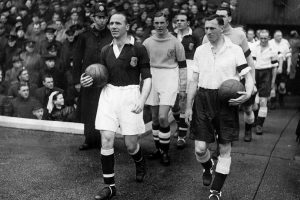 When the war was over Mercer returned to Everton, but things were not the same. Secretary Theo Kelly had now taken over as manager and he accused the player of ‘not trying’ when captaining his country in a victory international against Scotland. England won the match 6-1 against a team captained by good friend and army pal Matt Busby.

In fact, Mercer had suffered serious cartilage damage as confirmed by a specialist and he would need an operation. Kelly and Everton decided that the player would have to pay for the surgery himself.

This obviously caused friction and, hearing of the dispute, Arsenal stepped in with a bid of £9,000 for the player in December 1946. The deal was agreed and completed, with a final petty act by the Everton manager. The parties involved met at the Adelphi Hotel to conclude the transaction and Kelly arrived with Mercer’s boots ensuring that he would not have the opportunity to return to Goodison to say goodbye to his teammates. 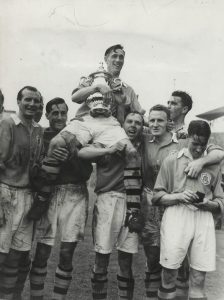 It was certainly Arsenal who got the better of the deal and Joe who got redemption. For the 1947-48 season manager Tom Whittaker made his new man captain and he led them to the First Division title with Everton finishing 14th. Two years later he was leading his team out at Wembley and collecting the FA Cup after victory over Liverpool, going on to be voted Footballer of the Year. And then in the 1952-53 season Mercer won his third title in all, and second as captain of the Gunners.

In April 1954 during a game against Liverpool, Mercer collided with Joe Wade and suffered a double leg fracture which forced his retirement from the game.

After retiring, Mercer ran a grocery shop in the Wallasey area and also worked as a journalist but in 1955 he was given the chance to return to the game when Sheffield United offered him the manager’s job. Initially the new job didn’t go well. His first season at Bramall Lane saw the club relegated and he was unable to bring them back up. 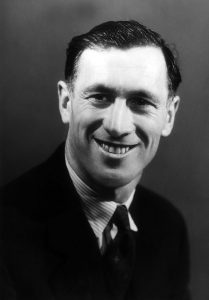 Moving to Aston Villa in 1958 he suffered a similar fate to that with Sheffield United, being relegated from the top flight in his first year in charge. He put a good young side together at Villa Park and they won the inaugural League Cup in 1961 but in 1964 he suffered a stroke and was sacked after recovering. 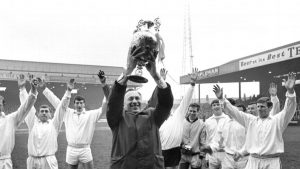 It All Went Right

Returning to full health, he also returned to management, at Second Division Manchester City, and this time it all went right. With assistant Malcolm Allison providing innovative ideas he built a team that both entertained and won.

Taking over in 1965 he added Mike Summerbee and Colin Bell (with Francis Lee joining a year later) and led the club to the Second Division title in 1966 and then the First Division crown in 1968. Then came the 1969 FA Cup and the 1970 double of League Cup and European Cup Winners Cup. That FA Cup win ensured that he became the first man to win both the league and the cup as captain and manager.

In 1971 Mercer and Allison took different sides in an ownership battle at Maine Road. The group led by Peter Swales, and supported by Allison won the day and the former number two took over as Manager, leaving his ex-boss out in the cold. 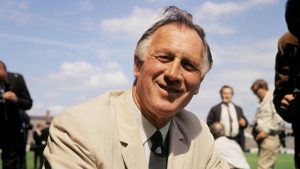 Mercer next moved to Coventry and while there he also spent seven matches in caretaker charge of England after Sir Alf Ramsey’s resignation.

Joe took over as England boss at a difficult time with the country having suffered a shock World Cup elimination at the hands of Poland. His choice of players – he gave Keith Weller and Frank Worthington debuts and also included the likes of Stan Bowles – indicated that he wanted to put a smile back on the face of England fans. It worked but sadly the reign was temporary with Don Revie taking the helm permanently.

After quitting as Coventry manager in 1975, he joined the club’s board of directors and served them until retiring in 1981. He was awarded the OBE for services to football in 1976.

Mercer suffered from Alzheimer’s during his later life and he passed away in 1990 on his 76th birthday.

Joe Mercer had to battle through many setbacks during his career. But he continually bounced back, and always did so with a smile on his face. The record of the man known as ‘Gentlemsn Joe’, as player, captain and manager truly stands the test of time. 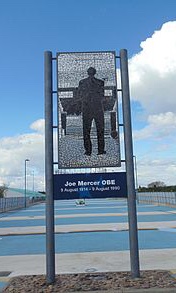