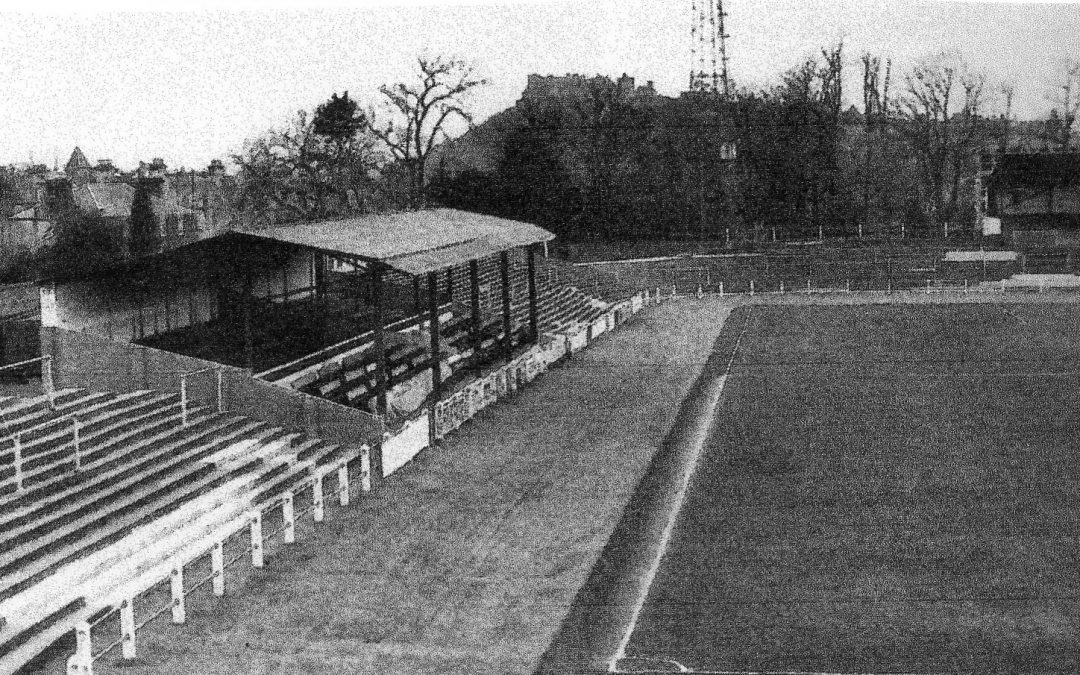 Prior to the 2nd World War, football fans in Stirling were served by the Kings Park club who played their home games at Forthbank Park.

Kings Park had been in existence since 1875 and had joined the Scottish League in 1921. They competed exclusively in the Second Division although they came very close to promotion in the 1927-28 season, missing out by a single point.

Forthbank Park also hosted greyhound and cheetah racing although the Scottish FA put an end to this when an inspection showed that the track encroached onto the football pitch.

In 1940, after employing a number of guest players – including Bill Shankly – in the early stages of the war, managing director Tom Ferguson decided to put football on hold at the club until hostilities ended. 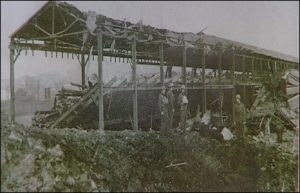 It was intended that the team would resume playing after the war ended but the Luftwaffe struck. It was one of only two bombs to land on Stirling during the war but it was Forthbank Park that took a direct hit on 20 July 1940.

After the war, coal merchant Ferguson, along with four local businessman, decided that instead of resurrecting Kings Park they would set up a new team in a new location. They bought the Annfield estate, cleared away cattle, chopped down oak trees and, with help from local volunteers, created a football ground. Trucks were used as viewing platforms while a grandstand was being built made up partly of bricks from air raid shelters and a former aircraft hanger became an enclosure. The grandstand was ready for use by 1946 and three years later was replaced.

The goalposts for the new pitch were made from the oak trees that had been chopped down and the 18th century mansion house was used as the dressing room – quite possibly the grandest in football with players making their way to the pitch vis the house’s french windows.

And so, Stirling Albion were born. In their first season, with Tom Ferguson taking charge the club were a success. Having recorded a 3-1 friendly win over Airdrie in front of 5,000 supporters they went on to win the Eastern League which was set up prior to a full organised programme returning the following season.

When it did return the Scottish League added a ‘C’ (3rd) Division. Stirling took part, and romped to the title finishing four points clear of Dundee’s A team.

So, in their third year of existence, Stirling were competing in Scotland’s second tier. The move up proved slightly more difficult and the club had to settle for a mid-table position in their first season at the higher level.

It only took a season. In the 1948-49 season the club lost out on the Second Division title on goal difference to Raith Rovers. But they were promoted as runners-up. So within five years of their formation Albion were competing in Scotland’s top flight, a remarkable rise. The rise up the league’s was reflected in work carried-out at Annfield. The new East Stand was soon joined by a new West Stand and the stadium capacity was well over 20,000.

Unsurprisingly this step up did prove too much and they finished bottom in the top flight. But the season also produced one of their greatest moments with 25,000 fans enjoying a 2-1 home win over Celtic. Albion also reached the Scottish Cup quarter-final before being eliminated by Partick Thistle.

The following year they were back up again, this time as runners-up to Queen of the South, the following season they were relegated again and the next year they went up as champions with George Henderson scoring 32 goals.

Albion then managed to just about survive (partly thanks to a win over Rangers), one place above the relegation places  in a season that also saw a prestigious friendly against Admira Wien of Austria before finishing in last place the following year when they amassed just six points from 30 matches.

Luckily for The Yo-Yos (you can see where that nickname comes from!), the league expanded so they kept their top-flight place – before losing it again with another bottom place in 1955-56.

In 1957-58 Albion were promoted once again, as champions and scored a club record 102 goals in doing so. 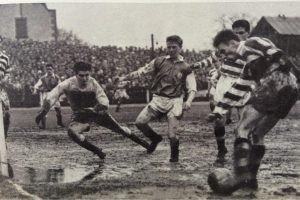 Lochhead scores for Celtic in their 3-1 win at Annfield

The following season provided Stirling’s best top-flight finish to date with 12th place and also an Annfield record attendance when 28,600 crammed into the ground for a Scottish Cup quarter-final with Celtic. The match resulted in a 3-1 win for the visitors on a rain-soaked pitch. Shortly after this the club added a roof to the northern terrace.

It should come as no surprise by now to know they were relegated then promoted over the following two seasons.

The 1961-62 season brought a mixture of good and bad. The good came with a run to the Scottish League Cup semifinal where they were slightly unlucky to lose 2-1 to Hearts. There was also the installation of floodlights at Annfield which were inaugurated in front of 6,000 fans with a match against Birmingham City who beat their hosts 3-1. The bad was another bottom-place finish in the top flight leading to yet another relegation.

Two years later things got even worse when Albion finished in last place in the Division Two. With the Scottish League by now only operating two divisions, the basement dwelling didn’t cost much more than the embarrassment of being the worst league team in the country.

The appointment for former Rangers star Sammy Baird turned things around again and he led the club back into the top flight. Three years later, with the team relegation-boing yet again Baird was sacked.

During Baird’s reign Stirling achieved one notable first when they travelled to Japan for a summer tour in 1966, becoming the first British team to play there in the post-war years. Stirling took the place of F.A. Cup runners-up Sheffield Wednesday who turned down the trip and played two matches, winning both and beating the national team 4-2 in the second.

A star of the tour was Henry Hall who grabbed a brace in the win over the national team. Hall, signed from Kirkintilloch Rob Roy would eventually leave the club for St Johnstone in 1968 and later played for Dundee United and Forfar Athletic as well as representing the Scottish League in a distinguished career.

In the 1968-69 season, under Willie McFarlane, the team finished 4th in the 2nd Division. But McFarlane made one excellent move for the club with the signing of George Young.

Goalkeeper Young was signed from Edinburgh team Melbourne Thistle and spent 10 years between the posts at Stirling, barely missing a match and making close to 400 appearances.

In 1978, Rangers were in need of goalkeeping cover for the European ventures and paid Stirling a healthy £20,000 for their custodian who switched to full-time football for the first time. He then had spells with Dunfermline Athletic and East Stirlingshire before hanging up his gloves

In 1970 the club appointed Bob Shankly as manager. Shankly, who had led the great Dundee team of the late-50s and early-60s, and was the brother of Liverpool’s Bill, spent three years in charge before becoming general manager and then joining the board. 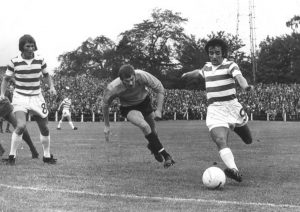 When Shankly ‘moved upstairs’ Frank Beattie took over for a season and he was then replaced by former Albion player Alex Smith.

Smith had been in charge at Stenhousemuir for six years before moving into the Annfield hot seat.  He then remained at Stirling for 12 years (1974-1986) before enjoying spells at St Mirren, Aberdeen, Clyde, Dundee United, Ross County and Forfar (twice) whilst also having a spell in charge of Scotland’s Under-21s.

He won two Scottish Cups (one each with St Mirren and Aberdeen), a Scottish League Cup with Aberdeen  and finish league runner-up three times with the Pittodrie club after leaving Stirling.

In 1974 after using Annfield House as the changing room and club offices since they first came into existence Stirling built a new block behind the East Stand specifically for these purposes.

Whilst at Annfield he guided the club out of the basement in 1977 although, almost inevitably, they were relegated again four years later.

In 1980 Smith gave a debut to local product John Colquhoun. The speedy striker would score 45 goals in just over 100 games for the club before being sold to Celtic. He later joined Hearts and won 2 Scotland caps whilst with the Edinburgh side, then moving south to t his luck in England

Disappointing spells with Sunderland and Millwall followed before he returned to Scotland, and to Hearts before a one-month spell at St Johnstone, helping them gain promotion to the top flight before retiring. He now works as an agent. 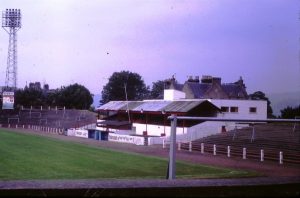 Annfield’s East Stand, demolished in 1981, with Annfield House behind

In the same year as their relegation back into Scotland’s basement division the club sold Annfield to Stirling Council in an effort to stave off bankruptcy. The council paid the club £250,000 for the ground and then leased it back to them at £3,000 per annum.

When carrying out routine safety checks in 1984 the council raised a number of safety concerns regarding the East stand and said that it would only help resolve these if the club made the ground more accessible to the public. This resulted in the installation of an all-weather pitch which staged the first Scottish League to be played on an artificial surface when Stirling met Ayr United in September1987.

The council supplied new floodlights and made a number of other upgrades to the stadium but eventually decided, in the early 1990s, that it would be more economical to construct a new stadium as the cost of further necessary safety improvements would prove exorbitant.

So, in 1993, Annfield closed it’s doors for the last time and Stirling Albion moved to the brand-new Forthbank Stadium. Stirling council demolished Annfield To make way for a new housing development.

So Annfield only served as a Scottish League Ground for 48 years. Stirling’s position as a yo-yo club meant fans would see just about every league team in the Scottish team and would see their own men beat the best and lose to the worst.