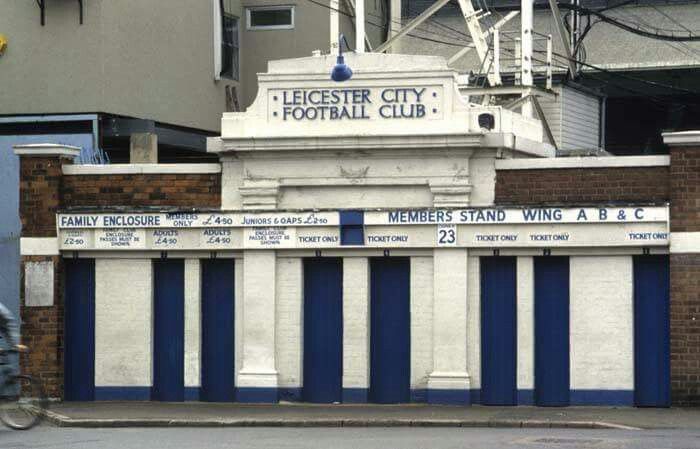 Leicester City weren’t always Leicester City. They started as Leicester Fosse and still were when they moved to Filbert Street in 1891. The ground then served as the club’s home for 101 years before they finally moved out in 2002.

Prior to Filbert Street, Fosse had led a nomadic existence for their first seven years. The club was formed in 1884 and the name came about because most of the players lived on the west side through which the famous Fosse Way ran. Many of those original players attended the local Wyggeston School

Home initially was ‘The Racecourse’ but they quickly moved on to Victoria Park, a ground they shared with the Leicester Tigers rugby club. After spending a year at Belgrave Road Cycle Track, where they had to use changing facilities at the White Hart Hotel a mile from the ground, they moved back to Victoria Park, swapping with the Tigers who offered a higher rent to the owners of the cycle track. Coming almost full circle, thousands packed Victoria Park in 2016 to celebrates City’s title win in 2016.

The club turned professional in 1889 and laid out their own ground at Mill Lane. This was necessary partly because Victoria Park was not enclosed and it was therefore impossible to charge the admission prices now needed to pay the players. However they were soon forced to look for yet another venue as after the 1890-91 season the council claimed the Mill Lane land for development.

Miss Westland, the niece of one of the club’s founders Joseph Johnson, was walking with her uncle when she spotted a patch of land and suggested it as a possible venue. Having purchased what was to become Filbert Street in 1890 they played for a short time at Aylestone Road Cricket Ground while their new home was being readied for action.

The first use of the new stadium was for a reserve match against Melton Swifts on 17 October 1891. It was initially called Walnut Street but the name was soon changed to Filbert Street. The original ground, with banking for spectators on three sides and a small West Stand, remained pretty much unchanged for 30 years until, in 1921, a new, and much larger, main stand was built.

The club had started life in the Midland League and were elected to Division Two of the Football League in 1894. They first reached the 1st Division of the league in 1908 but were immediately relegated again the following season beginning what has often proved a yo-yo existence.

By the time football resumed after the First World War, Leicester Fosse had ceased to exist due to financial difficulties, and were replaced by a new team, titled Leicester City Football Club, the ‘City’ suffix having been added as Leicester had recently been granted city status.

From Fossils to Foxes

In their earlier incarnation as Leicester Fosse the team’s nickname was ‘The Fossils’ but now a new one was needed. Suggestions included ‘The Filberts’, ‘The Royal Knuts’ and ‘The Hunters’. The county of Leicestershire’s long-standing connection to fox-hunting led the club and its fans, some time later, to settle on ‘The Foxes’.

The 1924-25 season ended with Leicester City as champions of the second division and the club enjoyed their best period until that point over the next decade.

In 1927 more construction work was carried out with a stand built at the South End which became known as the Spion Kop and which also became known as the ‘Double Decker’. The roof which had covered that end of the Stadium was moved to the north side. 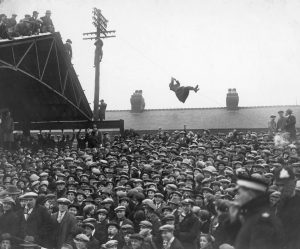 In early 1928, 47,298 attended an FA Cup 5th round tie against Tottenham Hotspur (although it was reported that over 55,000 showed up), setting an attendance record which would stand until the stadium was demolished. Others watched the match from the roof of the stand or from just about any vantage point they could gain. Sadly, the home fans saw their team beaten 3-0. 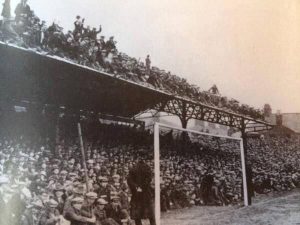 The following season was perhaps the best in City’s history at Filbert Street. With four England internationals in the starting line-up they finished second in the First Division, a solitary point behind champions The Wednesday (later, of course, Sheffield Wednesday).

Within a few short years the club were relegated again and they found themselves bouncing with some regularity between the top two tiers.

Germans Knock it Down – and Help Rebuild it

During the 2nd World War the main stand was hit by a bomb and then suffered further damage in a serious fire. In the years following the war the stand was rebuilt with much of the labour, somewhat ironically, being provided by German POWs from a nearby camp. After the work was completed capacity was set at 42,000. 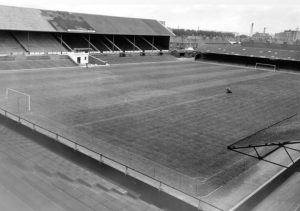 In the 1948-49 season the club came perilously close to relegation from the 2nd Division, survival by a single point after gaining a last-day draw. Against this they had their best-ever FA Cup year, reaching the final at Wembley where they were beaten 3-1 by Wolverhampton Wanderers. They also survived a major threat to their home at around the same time with the council coming close to terminating their lease. The decision went to a vote and it went narrowly in favour of allowing them to stay. 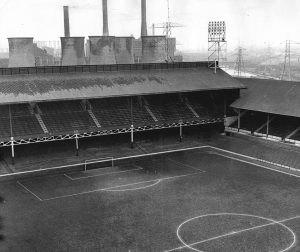 Floodlights were installed in 1957. German giants Borussia Dortmund were invited to Filbert Street for the first match under lights and City ran out 1-0 winners thanks to a goal from Scottish forward Willie Gardiner. 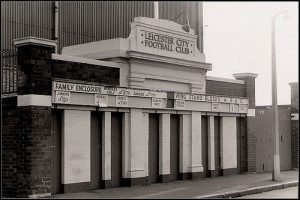 In 1962 the club finally bought the freehold of the ground for £30,500 from the local council, it was still very much a ‘ground of two sides with a big stand and grand entrance on one side and entry through a gap between houses on the other. 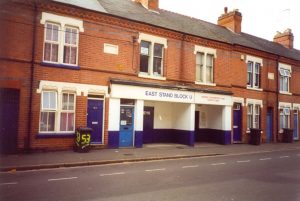 On the pitch the 60s was perhaps the best in the club’s history at Filbert Street. Under the leadership of Matt Gillies, the Foxes reached the FA Cup Final three times finishing runners-up to double winners Tottenham Hotspur in 1961, to Manchester United in 1963 and to Manchester City in 1969. In 1964 they took the League Cup with a 4-3 two-legged win over Stoke City and then came very close to a second successive win, losing out to Chelsea in the following year’s final. Leicester also provided Gordon Banks, England’s goalkeeper in the 1966 World Cup win and included other fine players including Frank McLintock, Dave Gibson and Mike Stringfellow 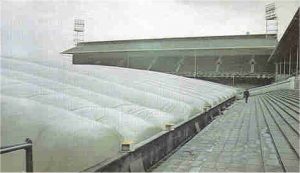 The 1970s saw a switch to all-seater stands on the north and East sides and shortly after, a number of executive boxes were added to the North stand. In 1971 the club started to use an innovative Polythene tent to protect the pitch against inclement weather.

On the pitch, with Jimmy Bloomfield at the helm for much of the decade, City were entertainers rather than winners. The line-up was regularly stacked with fine players. Frank Worthington, Keith Weller, Len Glover, David Nish and of course, Banks’s successor Peter Shilton represented the team during this period and it was often said that they should have been capable of producing more, perhaps favouring entertainment over results. 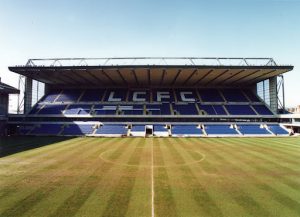 The new Carling Stand was added to Filbert Street in the early 1990s and the club enjoyed another excellent period on the pitch, this time under the leadership of Martin O’Neill. But the Irishman was one of the leaders of the campaign for City to move to a bigger and better venue and Filbert Street was eventually sold to developers for £3.75 million in 2002.

The last game at the old stadium was the final game of the 2001-2002 season, a 2-1 win over Tottenham Hotspur, fittingly as the last-day visitors were the very same club that set the all-time attendance record some 74 years before. The Carling Stand, so recently built and still in fine condition was almost sold to Rotherham United but eventually, like the rest of the ground, it was demolished to be replaced by the new development, part of which provides homes for students of the local De Montfort University.

Upon moving to the new King Power, one of the club’s most-famous traditions was taken with them. That is heralding the arrival of the teams onto the pitch with the playing of the ‘Post Horn Gallop’. The tune was originally used to herald the arrival of mail coaches and its use at Leicester home games dates back to the 1930s. There have, at times, been suggestions to change this but City fans have reacted angrily and we certainly say; long may it remain!