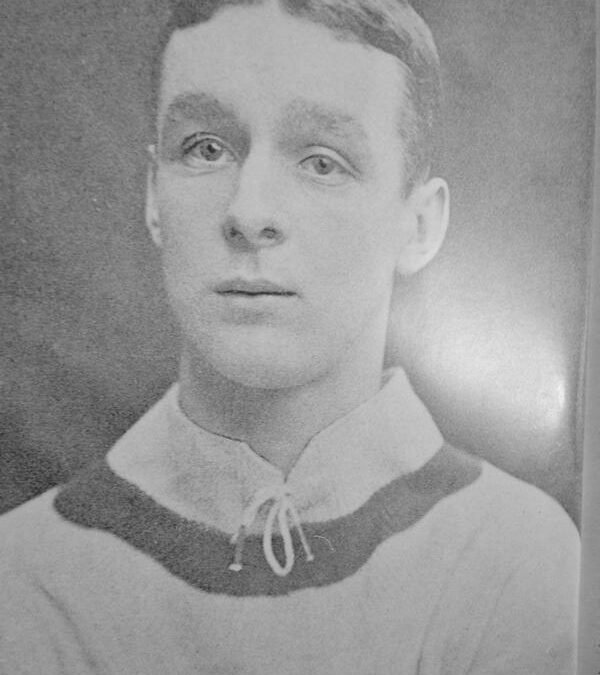 Many great players can look back and wonder how their career might have panned out were it not for the two great conflicts of the 20th century. As in both cases football was suspended, stars went off to don military uniform and protect their loved ones and their freedom instead of plying their trade in front of adoring fans. And many were left to wonder ‘what might have been’.

One of those for whom this had a major effect during the 1914-18 conflict was Harry Hampton, Aston Villa’s goalscoring star.

Hampton had already captured the game’s major honours and represented his country but, at 29 when the Great War broke out and at the prime of his career, he surely must have felt he could have achieved even more. By the time he returned to the game after hostilities were over, his best days were clearly behind him, and he could do no more than look back and wonder about what might have been.

Joseph Henry Hampton was born in Wellington, Shropshire in April 1885, the fourth of five children to Henry, a wood sawyer and Selina (younger brother George would play for Glossop and later joined Aston Villa). His first football was played with local clubs Shifnal Juniors and Lilleshall Ironworks before moving to Wellington Town then playing in The Combination.

Hampton’s exploits at Wellington brought him to the attention of league clubs. It was Aston Villa and their shrewd Scottish boss George Ramsay who moved quickest, parting with £120 to bring the 19-year-old to Villa Park in April 1904.

Hampton started the 1904-05 season in Villa’s reserve team. The club were struggling at centre-forward and went through a number of different options in the early part of the campaign. By Christmas and almost as a last resort Ramsay decided to let his youngster loose. The effect immediate as the new man scored 22 times in 28 matches.

“He was an instantaneous success”, former Villa chairman and founder of the Football League William McGregor would later say. “He revolutionised the style of play and gave a point to all their attacks”.

The two most important of the goals brought the FA Cup back to Villa Park. Ramsay’s men had seen off Leicester Fosse, Bury, Fulham and Everton (after a replay in which Hampton got the winner) to reach the final.

Hampton went into the game at the Crystal Palace having scored in every round and he kept up the record in the final, netting in the 2nd and 78th minutes as Villa, wearing black armbands in honour of the Lord Mayor who died suddenly on the eve of the match, beat Newcastle United 2-0 in front of 101,117 fans.

Harry scores in the final

Centre-half Alex Leake started the move for the first goal and Hampton was on hand to finish it off. Newcastle, who would go on to win the title (Villa finished fourth), pressed for an equaliser but Ramsay’s men held on and always looked dangerous on the break. With 12 minutes remaining Bert Hall’s shot was pushed out by United goalkeeper Jimmy Lawrence and Hampton slotted home the rebound to secure the trophy. 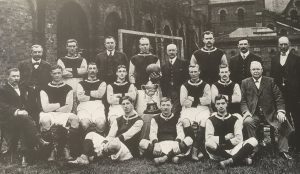 Villa with the Cup. Hampton is to the left of the trophy

Hampton had arrived at the top, and he would remain there. He formed an excellent partnership with Joe Bache and in the next three seasons scored 20, 21 and 19 goals.

The big surprise was that Hampton was continually ignore by the England selectors. Whilst Bache was called up to play for his country a number of times Hampton was ignored despite his consistent scoring that kept him at or near the top of the Football League charts.

His and his club’s performance reached their peak in the 1909-10 season when ‘Happy Harry’ scored 29 times in 35 games as Villa finished five points clear of Liverpool to claim the title. 71 years would pass before they won it again.

He carried on scoring with remarkable consistency finding the net 21, 28 and 30 times over the next three campaigns as Villa continued competing at the top of the table.

Loved by fans at Villa Park, Hampton, although not huge by the standards of the time but was robust and was more than capable of mixing it with defenders as well as barging opposing goalkeepers. One of the top proponents of the ‘shoulder barge’ he thought nothing of shoving ball. ‘keeper and sometime defender too into the back of the net.

In 1913 Villa made it to another FA Cup final and this time met the other north-east powerhouse Sunderland. Hampton didn’t score in this final but he got another winner’s medal as Tommy Barber’s goal separated the sides.

Shortly after his first England call-up

The 1912-13 season also saw Hampton finally get international reward for his efforts when he was called up to play for England against Wales at Ashton Gate. The experimental team featuring seven new caps fell behind, fought back, went 3-2 in front and extended their lead when the Aston Villa man headed home. Wales pulled it back to 4-3 but the English held on.

Along with Joe McCall and Joe Hodkinson Hampton kept his place in the line-up for the match against Scotland at Stamford Bridge. 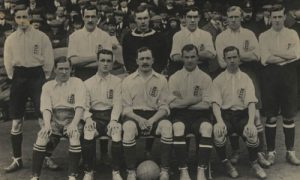 England line-up at Stamford Bridge. Hampton is sitting to the right of skipper Bob Crompton

A crowd of 52,500 flocked to West London and saw a tight-fought encounter which remained goalless until the 37th minute when Scottish goalkeeper Jimmy Brownlie caught the ball and was barged over the line by Hampton for the game’s only goal.

Left out of the team that suffered a shock defeat to a Ireland at Ayresome Park, Hampton returned to the line-up when England beat Wales 2-0 at Ninian Park, though he didn’t score and then suffered his only loss in national team colours when Scotland ran out 3-1 winners at Hampden Park in what would prove to be the last international for over five years.

Hampton continued to top score for his club with 24 and 19 goals in the last two seasons before the league was suspended due to the outbreak of the war. There had been reports in 1914 that Hampton was set to sign for Manchester United with a fee of £3,000 changing hands. But the deal never materialised and he continued to play for the club right up until the outbreak of the war.

In 1915 Hampton joined the East Surrey Regiment before transferring to the Royal Army Medical Corps with who he was based at Aldershot and still playing regular Army football. He next spent some time in Lancashire where he guested for Blackpool also turning out for a British Army XI who played a Belgian Army team at Villa Park.

Hampton was then posted overseas and in 1917 news circulated that he had been seriously injured, which the player himself denied. In 1918 he was based near GHQ in France and he would continue here for the remainder of the conflict, once being the victim of a mustard gas attack.

Discharged from the Army in July 1919 and issued a silver war badge later that year Hampton returned to Aston Villa but failed to get back into the team and in early 1920 after 215 goals in 341 games he made the short move to Birmingham where he scored 31 times in 57 starts and where he was also licensee of the New Station hotel.

In 1922 Hampton moved to Newport County where he scored twice in fourteen matches, also receiving a six-week ban for threatening to hit an opponent in a match against Portsmouth.

After his brief stint with Newport Hampton hung up his boots and moved into coaching working with Preston North End and Birmingham before leaving the game for good.

He moved to Rhyl and ran the Carlton Cafe until his death in 1963 aged 77.

With two FA Cup winners medals and one for winning the league title, and with over 250 goals in his career, there aren’t many holes that can be picked in Harry Hampton’s career. A meagre total of 4 international starts seems scant reward for a player of his undoubted scoring abilities.

We’ll never know why he wasn’t chosen more often for his country but one thing is for sure. Harry Hampton made many Aston Villa fans very Happy.