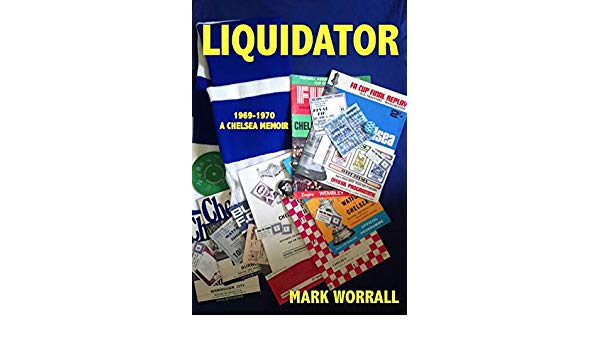 With the large number of football books now on the market it is increasingly difficult to find one that looks at the game in a different way. In this respect Liquidator is a rarity.

Mark tells the story of his friendship with Tommy Walker, initially forged before a match at Bramall Lane in 1976 when Tommy and his friends rescued 16-year-old Mark from an even more severe beating than he was receiving at the hands of an over-zealous policeman.

After a nine-year gap the pair meet up again and the friendship is reignited. Fast forward to 2019 and Mark, his closeness with Tommy having grown over the years is visiting his now-ailing friend in a care home.

Tommy knows his days are numbered and asks for Mark’s help; he wants to put down his memories of Chelsea’s 1969-70 season, and the time the Blues first won the FA Cup.

After a vivid description of Tommy’s first-ever visit to Stamford Bridge, for the 1955 match against Sheffield Wednesday we move to that wonderful (for Chelsea fans) 69-70 campaign.

Tommy, via Mark, then takes on a great ride through that season. And not just on the football-going side. As the book’s title suggests there’s a look back at the music, clothing and culture of the late 60s and early 70s too. This makes Liquidator, whilst using football as it’s base story, a much more rounded and comprehensive look at a time when football and music seemed so entwined.

During the course of the season Tommy meets his future wife, gets a new job and, of course, sees his beloved Blues win the Cup, and we get to relive it all with him.

Liquidator is a great and unique look back to a time when football, going to football, and supporting a football team were so much different to how it is now.

Chelsea fan or not, if you remember that era or if you didn’t but want to understand what it was like to follow ‘the beautiful game’ 50 years ago Liquidator is a must-read

Liquidator is published by Gate 17 and is available on Amazon and also from www.gate17.co.uk