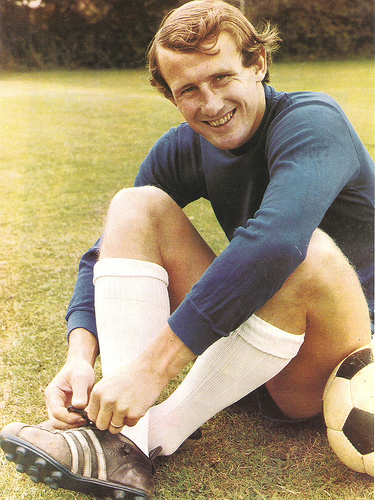 THE Chelsea team of the late 1960s and early 1970s was full of great – and big – characters. Peter Osgood bestrode the Kings Road as ‘The King’, Charlie Cooke was the master of wing-trickery, Bobby Tambling was a great goalscorer, Ron Harris was ‘Chopper’, the hard-man who took no prisoners, Ian Hutchinson was bold and brave, Peter Bonetti a goalkeeping hero, Alan Hudson a wonderfully-gifted player whose achievements never quite matched his skills and David Webb the play-anywhere man.

And then there was Peter Houseman, quiet, and unassuming, a ‘player’s player’ who was often the subject of fans’ ire instead of being the recipient of their praise. But ‘Nobby’ as he was known was well-enough respected by his teammates and became a fixture in the team. After his tragic and untimely death, he earned a deserved place in Stamford Bridge folklore. 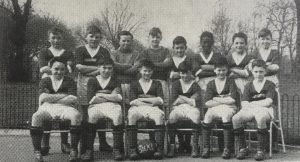 Spencer Park, with Peter as captain

Houseman was born in Battersea, South London and attended Spencer Park grammar school, probably better known for cricket activities than football. Chelsea’s Frank Blunstone was coaching at the school and recommended him and after a successful trial he abandoned plans to be an electrical engineer and joined the club. He made his way through the youth, South East Counties and Combination leagues alongside other future stars John Hollins and John Boyle and all signed professional forms in 1963 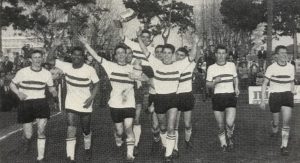 Hollins made his first term debut in September 1963 and three months later Houseman made his first start in a 3-2 win over Sheffield United. But he failed to earn a regular place in the line-up. In the following three seasons he was often left out in favour of the Scottish star Boyle and it was as if he never earned then-manager Tommy Docherty’s total trust.

In October 1967 Docherty left Stamford Bridge after a series of arguments with the board. Dave Sexton returned to the club from Arsenal where he had been first-team coach and took over as manager and it quickly became clear that he had much more faith in Houseman than the man he replaced. 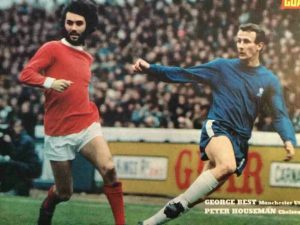 Houseman gets a cross in despite the attentions of George Best

Under Sexton, Houseman was given a regular place in the team, the majority of his appearance coming on the left wing although he would sometimes be used in midfield and even served as an emergency left-back and he flourished. Early in the 1968-69 campaign he had a breakout game in a 4-0 win for the Blues over then-European champions Manchester United at Old Trafford. By the following season he had become a regular and supplied the crosses that the strike duo of Osgood and Hutchinson thrived on. John Hollins remembers Houseman as; “Very quiet, it always looked like he was thinking about something, but once he got on the field he was a really forceful person. He was like an explosion”.

The Nickname?’ -“it was a name given to me when I first came to Chelsea, I can’t remember who by”. saId Houseman years later – teammate Hollins says of him, “Anybody you asked in that team who they wanted as a team-mate, it would be Peter Houseman without a shadow of a doubt”.

He played a major role in the run to the 1970 FA Cup final with 5 goals including running on to a pass from Alan Hudson and firing home from 20 yards at Burnley, a goal that brought the Blues back on level terms and sent the game into extra-time. He then made the second for Tommy Baldwin and scored the third in what was probably his finest individual performance in Chelsea Blue. After netting in the 6th round win over Crystal Palace he added two more in the 5-1 semi-final victory over Watford, and then provided Chelsea’s first lifeline at Wembley.

Chelsea fell a goal behind against Leeds United on a boggy almost unplayable pitch and looked like being overrun by their opponents. A few minutes before half time. Houseman latched on to a downward header from Ian Hutchinson and tried a speculative shot which bounced under a sprawling Gary Sprake and into the Leeds goal. Pitch conditions might well have had something to do with the goal but it really didn’t matter to Chelsea, they were level. They would fall behind again before a late equaliser from Hutchinson earned the Londoners extra-time, and then a replay. 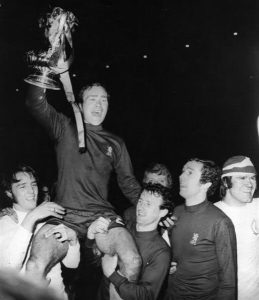 Chelsea went on to win the trophy after falling behind for a third time in the tie at Old Trafford in the replay and Houseman, who had been ever-present all season again played a big role.

Houseman was also a major factor the following season when Chelsea won the European Cup Winners Cup beating Real Madrid, again after a replay, in Athens and by now, he had clearly won over those doubters among the Stamford Bridge faithful. 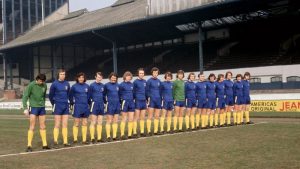 Sadly after that win in Greece and reaching the League Cup final the following year where they lost to Stoke City, things began to unravel at Stamford Bridge with boss Sexton falling out with some of his star players. The board took Sexton’s side in the arguments and the star men Peter Osgood and Alan Hudson – were sold. 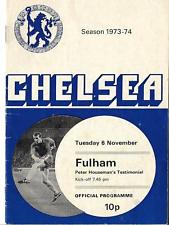 In total Peter made an impressive 343 appearances for the Londoners. Awarded a testimonial in 1973 (there were two matches, Chelsea beat Fulham 4-1 at Stamford Bridge and then travelled to Basingstoke, where he was heavily involved in youth team football, to beat the local team 4-0) Houseman stayed but was now playing in a much-weakened team and for a club with no real money to spend. 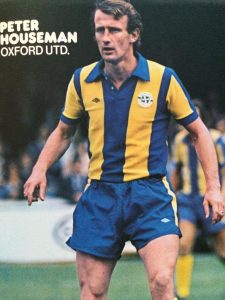 In 1974-75 Chelsea were relegated and the winger was sold for £30,000 to Oxford United that summer and would spend the next two seasons at the Manor Ground and, although the team struggled during his time there he was highly thought of by teammates and fans alike and seemed settled at the club. Then tragedy struck. 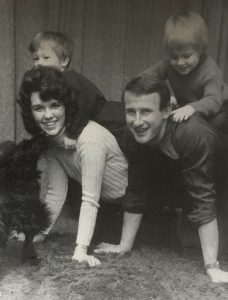 Peter and Sally with their sons Matthew and Daniel.

In March 1977, Houseman, his wife Sally (who he met when both were just 10 years old) and friends Alan and Janice Gilham were driving to their homes in Witney after a charity event. Bartholomew Smith, the 22-year-old son of a former MP was driving his Maserati in the opposite direction. Travelling at between 90-100mph, Smith lost control and his car veered into the oncoming lane turned broadside and was struck by the Hillman Avenger the two couples were travelling in killing all four occupants and leaving six children orphaned.

At the subsequent trial a Doctor who examined him at the Radcliffe Infirmary claimed that there was no doubt that Smith was ‘considerably intoxicated’ but the defence insisted that not enough tests had been carried out to prove this conclusively. Smith was found guilty, but given only a ten-year driving ban and a fine of £4,000. On sentencing the judge revealed that the driver had three previous speeding convictions and another for ignoring a road sign and summed up by saying; “In my opinion you must have another driving test before you are safe on the roads again”.

In 1977 a series of matches were played with proceeds going to the Houseman/Gilham dependents fund. First, Chelsea played Arsenal at Stamford Bridge, then there was a match attended by 17,000 between the Chelsea 1970 and Chelsea 1977 teams also at Stamford Bridge, and then Chelsea travelled to the Manor Ground to play Oxford United.

Peter’s name lives on in the form of the Peter Houseman youth league, now in its 50th year, featuring teams in Berkshire and Hampshire which has divisions and cup competitions for a number of age groups between under-9s and under-15s. Set up in 1969 by Peter, who coached the team in his home village of Oakley with Sally as the league’s vice-president, and some friends with six teams the league now features over 230 teams from 40 different clubs.

It is nice to think that the understated player, who despite his low profile played a key part in the successful ‘Kings Road Entertainers’, and whose life came to such a tragic end at just 31, is remembered in the way he would surely have enjoyed, with kids continuing to play in a Peter Houseman youth league.

Peter Houseman overcame the initial misgivings of fans at Chelsea and took it all in his stride; “They pay their money and if they want to have a go at me that’s their business”, he said of the boo-boys. “I don’t want to run away from it”.

He would end up as well respected by fans as he had always been by teammates. The tragic and clearly avoidable end to his life was tragic but the fact that he is so fondly remembered is at least some small comfort to the children left behind.