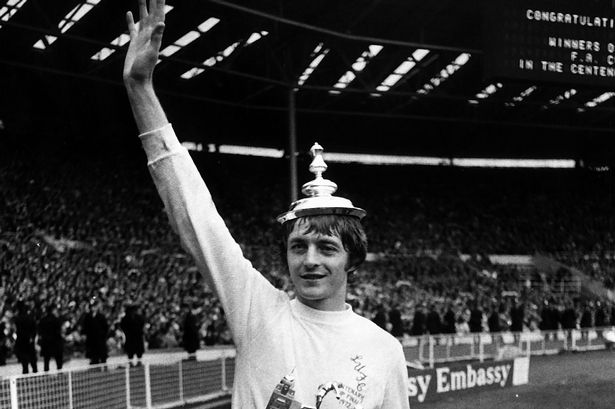 THE previous British transfer record holder broke the record twice as Denis Law set new marks when both joining and leaving Torino. And the man who followed him did the same.

Allan Clarke was from a footballing family. Four of his brothers also played the professional game. First up was Frank who started his league career with Shrewsbury Town. Allan started instead at Walsall and the three brothers who followed him into the game, Derek, Kelvin and Wayne, would also begin their careers at Fellows Park.

Whilst at school Allan represented Willenhall Boys under-11 but he was initially turned down by Birmingham’s County selectors who decided he was too small. Joe Mercer, then manager of Aston Villa, clearly didn’t think so and he invited the youngster for a week’s trial. After the week he was invited to join the Villa Park groundstaff but he came to the conclusion that the club might be ‘too big’ for him and looked instead to closer-to-home Walsall.

Clarke, by now a regular for South Staffordshire schoolboys, also turned down West Bromwich Albion, instead signing for Saddlers manager Bill Moore in 1961. The decision to start lower down the ladder paid off as ‘Tiny’ (as he was known at the time – the ‘Sniffer’ moniker coming later) made his first-team debut aged 16, being given his chance because it was regular inside-right Jimmy O’Neill’s wedding day. 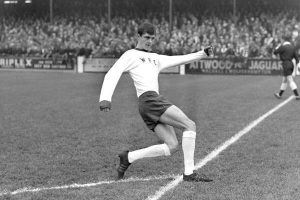 Not long after Clarke’s debut, manager Moore was sacked. His replacement Alf Wood lasted only a few weeks before he too was given his marching orders, reportedly for his insistence in picking Clarke.  After Wood left Clarke argued with then Chairman Ernie Thomas and requested a move. But it was Thomas who left, replaced by millionaire Bill Harrison who brought in a new manager, Ray Shaw and a number of former top players including Trevor Smith and Howard Riley.

Thriving on the new players surrounding him, Clarke soon started scoring on a regular basis and finished the 1964-65 season with 23 goals and as the recipient of the Walsall’s supporters Player of the Year award .

It was a goal in the shock F.A. Cup win at Stoke brought the attention of scouts. The leading suitors were Vic Buckingham at Fulham and Matt Gillies at Leicester and it was the Londoners who won the day when Walsall accepted a bid of £35,000, the fifth made by Buckingham and Clarke, aged just 19, moved south having spent three years at Walsall and scored 41 times in 72 games, finishing as the team’s top scorer in two successive seasons. 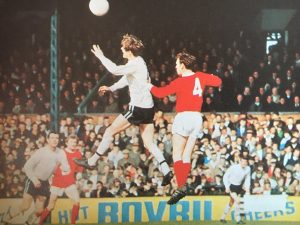 At Craven Cottage Clarke effectively replaced Rodney Marsh in the line-up with the latter having been sold to Queen’s Park Rangers for £15,000 after falling out with boss Buckingham.

The team had hit some form in the midst of a relegation battle when Clarke joined and he initially found it hard to get a place in the line-up, to such an extent that one newspaper labelled him ‘Fulham’s £35,000 embarrassment’. He finally got his break, coming on as sub for an injured Johnny Haynes, ironically against Leeds, and did well enough to keep his place and help guide the Londoners to safety, with the club finishing one place above the drop zone. 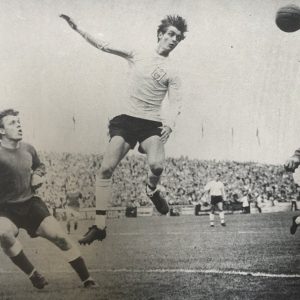 In the following campaign Clarke managed 24 goals in 42 games as his team finished in a relatively ‘comfortable’ 18th place but in 1967-68, despite another 20 goals from their leading scorer, the Cottagers finished at the foot of the top flight and were relegated.

After Fulham dropped down to the second flight it was no surprise to see Clarke coveted by a number of top flight teams. It was also no surprise that Leicester manager Matt Gillies, a long-time admirer, snapped him up for an eye-catching £150,000 and he left west London with a record of 45 goals in 86 games for the team. 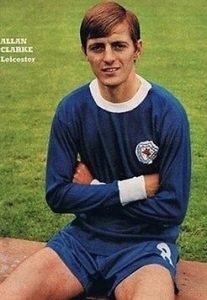 New club Leicester made a terrible start to the 1968-69 season and by November Gillies was gone, replaced by Frank O’Farrell. 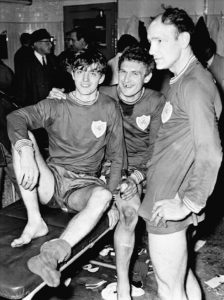 The Foxes new boss managed to conjure an F.A. Cup run out of his charges, they eventually lost 1-0 in the final to Manchester City. Clarke scored the winner in the semi-final against West Bromwich Albion and was chosen as Man of the Match in the final.

Despite Clarke’s best efforts Leicester couldn’t escape the drop, finishing one point adrift of safety so the striker suffered his second successive relegation. But the next move would ensure that there wouldn’t be a third.

It was Don Revie, boss of champions Leeds United, who moved in with a bid of £165,000, one a recently relegated club couldn’t refuse, and Clarke was on the move again. 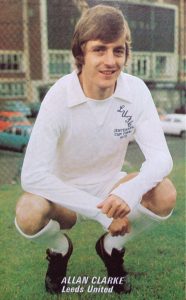 After securing the Charity Shield on his debut for the club and having scored on his first league start in a 3-1 win over Spurs, Clarke’s initial season at Elland Road was full of near misses. Runners-up in the league to Everton. The club were beaten in a memorable F.A. Cup final replay by Chelsea and lost in the semi-final of the European Cup to Celtic. Leeds played a total of 62 games during the season and a fixture backlog, along with fatigue, clearly caught up with them at the season’s climax. United had played nine games in 22 days when a Revie led them onto the pitch for the F.A. Cup final. They went in front twice but were pegged back by a dogged Chelsea team who forced the game into extra-time, and an eventual replay, late on.

In the replay Clarke played a big part in Leeds going in front when he evaded several challenges and sent Mick Jones clear to score. Again Chelsea came back, equalising with 12 minutes left and then grabbing the winner in extra-time. 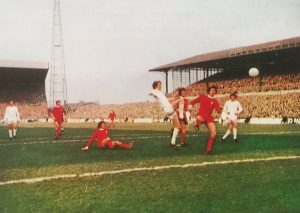 Clarke formed a great strike partnership with Jones recruited from Sheffield United. The pair scored a combined 52 league goals in their first season together and complemented each other with Jones’ more physical approach dovetailing well alongside Clarke’s predatory instincts. Eddie Gray and Peter Lorimer provided ammunition from the wings whilst Johnny Giles and Billy Bremner prompted from midfield.

Clarke’s form also earned a first call-up to the full England team after making a number of under-23 appearances during his time at Fulham (including scoring four times on his under-23 debut, an 8-0 thrashing of Wales in 1966 and teaming up with Jones for the first time in a 3-0 win over Austria). 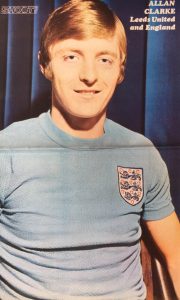 The forward’s impressive displays in the 1969-70 season, which included 26 goals, saw him called up to the England squad for the World Cup in Mexico. England played Czechoslovakia in Guadalajara in their final group game needing victory to ensure progress to the quarter-final. Clarke was chosen to play up front with Jeff Astle, and he was handed the ball when England were awarded a disputed penalty shortly after half-time. He duly dispatched the kick which proved to be the match-winner ensuring his country’s progress to the last eight.

Clarke was left out for the quarter-final loss to West Germany but would go on to win a total of 19 caps for his country, scoring 10 times, including a record of a goal-a-game in his first four appearances. 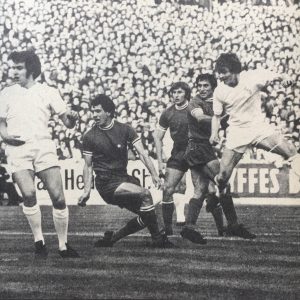 The following year was another of near-misses for Leeds as they were beaten in the title race by Arsenal after suffering a disappointing loss to West Brom when Clarke had what looked like a perfectly good goal chalked off. Consolation came in the Inter-Cities Fairs Cup where Leeds, with help from a Clarke goal, overcame Juventus in the final. 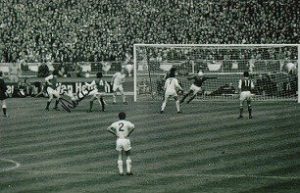 In 1971-72 Leeds finally captured a big domestic honour and Clarke played a major role, scoring the winner with an excellent diving header (from a cross from Jones) against Arsenal in the centenary F.A. Cup final. Not only did the goal earn his team the Cup, it also gave the player his second Wembley Man of the Match award. Yes, despite that success the season could again be justifiably categorised as one that could have been so much better. Leeds travelled to Molineux on the Monday after the final needing just a draw to clinch the title, and the double. But Wolves came out on top 2-1 against a clearly exhausted United, handing the crown to Derby County. 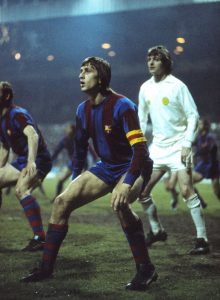 The 1972-73 season provided yet more disappointment for Leeds fans and for ‘Sniffer’. They dropped to 3rd place in the league, and missed out in two cup finals, losing to Sunderland in the F.A. Cup at Wembley and being beaten by Milan in Greece in the final of the European Cup Winners Cup, a match he missed through injury.

Finally in 1973-74 Clarke captured the holy grail of the 1st Division title, as Leeds rode an unbeaten run of 29 games to finish five points clear of Liverpool. Clarke had a mediocre (by his own high standards) season in front of goal, finding the back of the net just 16 times but a title-winners medal more than compensated. 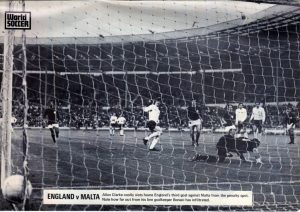 By this time Clarke was an England regular and he played in the Wembley disaster against Poland which saw England eliminated from the 1974 World Cup, and saw Sir Alf Ramsey lose his job as national team manager, to be replaced by club boss Revie.

Leeds appointed Brian Clough as Revie’s replacement, a disastrous move which lasted just 44 days. Replacement Jimmy Armfield managed to lead the team to the European Cup final where they lost in controversial circumstances to Bayern Munich in Paris.

The 1974-75 season saw a transitional Leeds team drop to 10th in the table with new arrival Joe Jordan topping the scoring charts with an injury-hit Clarke managing just seven goals. 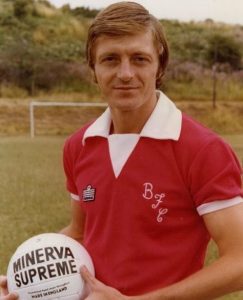 Clarke’s final season at Elland Road saw him make just nine starts, scoring four times and in the summer of 1978 he moved to Barnsley for £45,000 taking over as Player-manager at Oakwell.

In his first season with his new club he led them to promotion from the 4th Division, scoring 12 goals in 34 games.

Clarke finally hung up his boots in 1980 but continued as manager of Barnsley until he was lured back to Elland Road to take over from the fired Jimmy Adamson. His exploits in the manager’s office failed to match those in the pitch and Leeds were relegated from the top flight in the 1981-82 season after which he resigned.

Further spells in charge at Scunthorpe United – who shocked Leeds in an F.A. Cup 3rd round tie, Barnsley again and Lincoln City followed but he seemed to be constantly working on tight budgets with sustained success hard to come by. 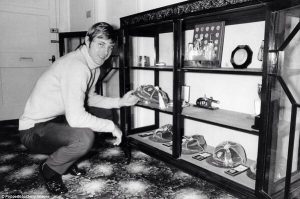 Clarke finally left the game in 1990 but it was his Leeds playing career for which he will be best remembered, along with well over 200 goals (with 151 for United including an F.A Cup winner). He was the archetypal ‘fox in the box’ rarely scoring from distance but always alert to the half-chance which he would more often than not put away and then turn, hands gripping shirt cuffs to raise a single arm in the air in a trademark salute.

At £165,000 Clarke didn’t come cheap; but the rewards he brought to Elland Road certainly made him value for money.