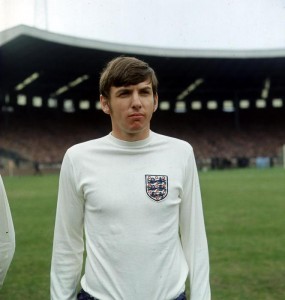 WHEN Sir Alf Ramsey guided England to World Cup success in 1966 he did so by employing a revolutionary system without winger. One of the reasons he was able to do so was the amount of ground covered by the midfield trio of Alan Ball, Nobby Stiles and Martin Peters.

Ball moved from Blackpool to Everton shortly after the tournament for £112,000, then a record between two English clubs whilst a Stiles would remain at Manchester United for the majority of his career. Peters stayed at West Ham for another four seasons before setting a new high for British transfers.

Since the 1893 transfer of Willie Groves for £100 the British transfer record had come a long way by March 1970. That was when Tottenham Hotspur set a new mark, splashing out £146,000 in cash plus the £54,000 value of Jimmy Greaves to acquire Peters.

Still only 26 at the time of the move, Peters was at the peak of his powers and surely felt a need to leave Upton Park to escape the shadow of fellow 1966 heroes Bobby Moore and Geoff Hurst although he would always claim that this was never the reason for the move.

Peters, the son of a lighterman (he guided barges on the Thames), was born in Plaistow in November 1943 and, after briefly considering following in his father’s footsteps, joined West Ham as an apprentice aged 16, in 1959 having, in his last match before joining the Upton Park groundstaff, captained England schoolboys against West Germany at Wembley. 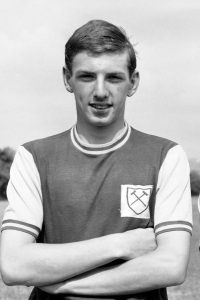 Three years later, on Good Friday 1962, Peters made his debut in a 4-1 home win over Cardiff City and he made four more appearances before the end of the season. In one of these, the return fixture at Cardiff he took over in goal after ‘keeper Brian Rhodes was injured.

He scored his first goal for the Hammers in a 6-1 win over Manchester City in September 1962 and earned a regular place in the team that season, making 39 starts. He made another 36 appearances in the following campaign but was somewhat surprisingly left out of the side that won the F.A. Cup at Wembley in favour of Eddie Bovington. 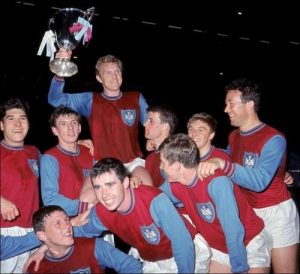 In the 1964-65 season Peters was again a regular in the Hammers team and when they made it to Wembley again, this time in the European Cup Winners Cup Final, he played a full part in the 2-0 victory over TSV Munich 1860.

It was in the following, 1965-66 campaign that Peters really came into his own. He played 40 games for the club and, more importantly, was becoming a much greater threat to opposing defences, breaking into double figures for goals scored for the first time with 11. 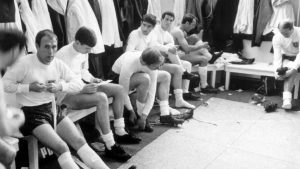 Such was his form that in May 1966 he was picked by Alf Ramsey for his first international cap, a 2-0 Wembley win over Yugoslavia. The debut for his country was the start of England’s switch to a 4-3-3 formation and Peters played a key role with his versatility proving a major asset. His next England start also brought his first goal, one of three his country got against Finland without reply. 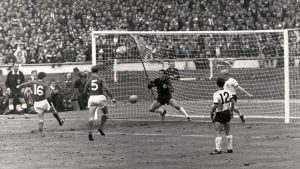 Having been left out of the team for the goalless opening draw with Uruguay, he was brought into the team in place of John Connolly for the 2-0 win over Mexico and retained his place for the rest of the tournament, memorably grabbing the ‘other’ goal in the final win to go with clubmate Geoff Hurst’s hat-trick. 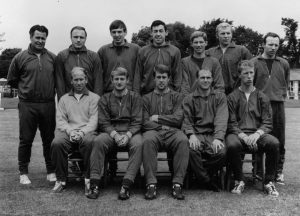 He was very much England’s ‘secret weapon’ during the tournament, being mostly unknown to the opposing coaches. But taking part forced him to miss an important event. It was wife Kathleen’s 21st birthday and manager Ramsey told the player that he could go home to celebrate but if he did, not to bother coming back! Needless to say, Peters stayed with the team.

Peters continued to impress for both club and country. At West Ham he missed only five games in four years and scored an extremely impressive 19 goals in the 1968-69 season. However he seemed to become increasingly unhappy at the club.

On the international scene he was a regular under Ramsey although he was saddled with the comment of being ‘ten years ahead of his time’ by his international manager in 1968, a comment that initially puzzled the player. “I lay awake half the night trying to figure out just exactly what Alf meant by me being ten years ahead of my time” he would later recall. “My first reaction was that there was no place for me in the present set-up and that this was Alf’s way of gently dropping me from the England scene.

“I thought it was a sort of public pat on the back before being quietly shown the door”.

He needn’t have worried. Peters continued to be a major part of the England line-up all the way through until he made his final appearance in the 2-0 loss to Scotland at Hampden Park in 1974, finishing his international career with 67 caps (including four as captain) and 20 goals.

The disillusionment at Upton Park led to Peters submitting a transfer request to Ron Greenwood. He refused to discuss the reasons behind asking to leave, saying; “it was very much a personal matter between the manager and myself’. Greenwood was similarly tight-lipped saying; “Just call it a clash of personalities”.

The player made his request public in October 1969 after asking privately for a move on four previous occasions although he vehemently denied that he had asked for the switch due to being in the shadow of teammates Hurst and Bobby Moore.

A more valid reason behind wanting to leave was that the player felt his versatility actually played against him. During his time with the Hammers, Peters wore every shirt for the club and was often denied the opportunity to play in his favoured attacking midfield position.

It was little surprise when the move did happen, that Peters switched to Tottenham Hotspur. Spurs manager Bill Nicholson had been a long-time admirer of the player often bringing his name up as ‘the ideal player for us’ in team meetings. On transfer deadline day in 1970 he finally got his man.

It was also no real shock that it was Greaves, like Peters a product of Dagenham schools football, but now with no real place in the White Hart Lane set-up who went the other way.

Peters had idolised Greaves when younger, recalling an occasion when he went to watch his school play against that of the striker and Jimmy’s team won 13-0 with the forward scoring 11. He later remembered being chosen for the 1966 World Cup final and briefly thinking ‘What the hell am I doing here when someone like him is a spectator?’

The move to Spurs came shortly before the 1970 World Cup finals where England failed to defend their crown and where Peters came in for criticism, specifically from Malcolm Allison who said of the player; ‘He’s the one that’s ten years ahead of his time, so we’ve got to wait for him to come good’.

Peters answered the comment saying; “The people giving me stick were doing it from 7,000 miles away and judging me by what they saw on the small screen. It was unfair”. 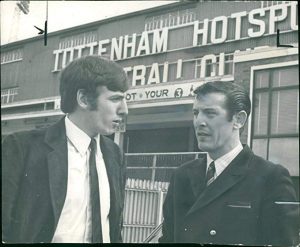 Despite scoring on his debut, Peters’ arrival at Spurs didn’t go smoothly and he came in for some stick from fans at White Hart Lane. Club and international teammate Alan Mullery sprang to his defence saying; “Those people criticising him should watch what he does without the ball”.

In five years with the North London club, Peters won his first domestic trophy with the 1971 League Cup victory over Aston Villa. He also competed in two UEFA Cup finals, winning one when Spurs beat Wolves in an all-English final in 1972 and then finishing on the losing side in 1974 when the side he skippered succumbed to Feyenoord. He was also a member of the team that beat Torino in the 1971 Anglo-Italian Cup. 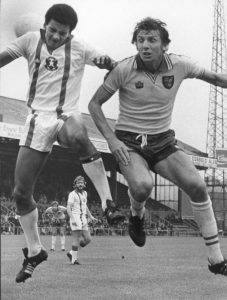 In 1975 Peters was on the move again when former West Ham man John Bond paid Spurs £50,000 to take him to Norwich City. He was 31 years old when making his debut for the Carrow Road side who were newly promoted to the top flight. 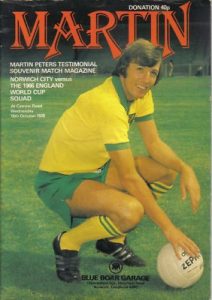 In a fine five-year spell with the club he helped them establish themselves in the top flight and was twice voted as Player of the Year. He was also given an M.B.E whilst at the club and was awarded a testimonial when the Canaries took on an All-Star XI featuring members of the 1966 World Cup winning team.

After five years in East Anglia, Peters moved on again this time joining 3rd Division Sheffield United as player-coach. He took over as manager from Harry Haslam towards the end of the season but was unable to stop a team in decline slipping into the 4th Division after which he resigned.

After retiring Peters worked in the insurance industry and was later appointed as a director at Spurs.

Martin Peters died in late 2019, the fifth member of England’s ‘Boys of ‘66’ to pass away, and he was mourned by fans of all the clubs he represented so well and so proudly along with football lovers everywhere. 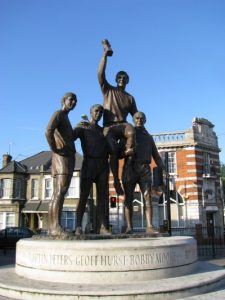 There is little doubt that many of that 1966 team, including his two clubmates, received greater recognition for England’s success. But it is also clear that Martin Peters was a key component in the team that captured glory.