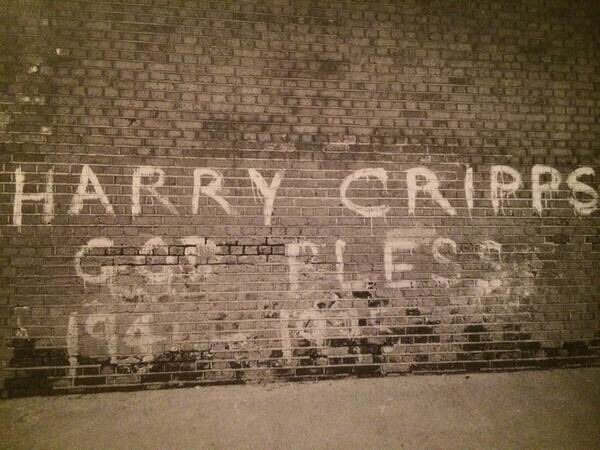 ‘HARRY, HARRY, BREAK US A LEG’

Every now and then a player comes along who seems to personify a club. This was certainly true of Millwall defender Harry Cripps.

Surprisingly for a man so associated with the London club, Cripps was in fact, born on Dereham, Norfolk, 15 miles from Norwich. Perhaps even more surprisingly for a Millwall legend his career actually began at bitter rivals West Ham United. In fact he played alongside Bobby Moore in the West Ham youth team that reached the 1958-59 F.A Youth Cup Final where they lost to Blackburn Rovers.

But Cripps never cracked the first team at Upton Park and he signed for the Lions in 1961, playing a relatively minor role in the 4th Division title win of 1961-62 with just three appearances. In fact, it took him a couple more seasons to become established as a Den regular but by the time of the club’s dual promotions in the mid-1960s he was firmly ensconced at left-back.

Such was the reputation that he built that home fans regularly regaled him with the chant ‘Harry, Harry, break us a leg’, while future England international Francis Lee is said to have once greeted him on the pitch with the words; ‘I’ll be keeping out of your way’. 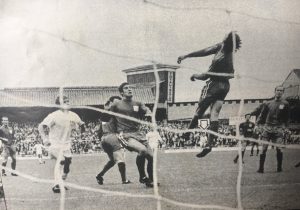 Cripps went on to make a record-breaking 400 appearances for the Lions and was awarded a testimonial against former club West Ham during a 1971-72 season that saw the club go so close to a 1st Division spot. He also scored 37 goals for the club including some penalties and one 60-yard special in a game against Fulham that started out as a long punt upfield and ended up sailing – with a little bit of wind-assistance – into the net.

Time was called on his Millwall career in 1974 and he spent a short period at another of Millwall’s arch rivals, Charlton, helping them to promotion from the 3rd Division, before hanging up his boots.

After coaching spells at Charlton, Southend United (where he was reunited with Moore) and Crystal Palace, Cripps tried his hand at management with non-league Barking before a spell as a coach of fee-paying school Winchester.

As a player it wouldn’t be unfair to classify Cripps’s ability as limited. But he made the most of the abilities he did have and as a competitor it is fair to say he was second-to-none and never gave less than 100% on the pitch.

Harry Cripps passed away after suffering a heart attack in 1995 but, even at the ‘New’ Den, his Millwall legend lives on. 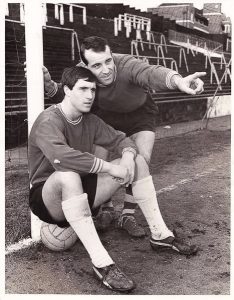 George and Desmond Thompson might not be names that linger long in the minds of even the most devout football follower. But in January 1952 the brothers made their own piece of history.

Scunthorpe United met York City in a Third Division (North) match and a brother was in goal for each team.

Honours finished even between the two as Scunthorpe, with 25-year-old George between the sticks fought out a 1-1 draw with York, for whom 23-year-old Desmond was on goalkeeping duty. The match was watched by their father, also George, who had himself kept goal for City some years before.

The brothers both had successful keeping careers. George was in goal for Preston North End in the 1954 FA Cup Final and went on to play for Manchester City and Carlisle United whilst Desmond would spend time as custodian at Burnley and Sheffield United.

The Thompson’s feat was matched in the mid-1960s when Ron Springett of Sheffield Wednesday and England lined up again brother Peter of Queen’s Park Rangers.

The Springetts (pictured above) actually went one step further in 1967 when they were swapped for each other! 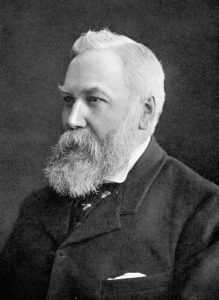 When Aston Villa board member William McGregor, universally acknowledged as the father of the Football League, wrote to other big clubs proposing a ‘Fixity of fixtures’ he had a name in mind for his new competition.

Scot McGregor (pictured above) proposed in his letter to the four other clubs, Preston North End, Blackburn Rovers, Bolton Wanderers and West Bromwich Albion that the new tournament, the first of its kind, be called the ‘Association Football Union’. William Sudell of Preston, suggested an alternative.

At a meeting at the Royal Hotel in Manchester In 1888, the five, plus Accrington Stanley, Burnley, Derby County, Everton, Notts County Stoke and Wolverhampton Wanderers went along with Sudell’s proposal and the ‘Football League’ was born.

Towards the end of the 19th century the Football Association decided on a law change bringing into effect something that seems a totally natural part of the game today.

Prior to that time Referees were kept off the field of play. In fact they would often sit on the touch line and only get involved if there was a difference of opinion between the two umpires controlling the game. The F.A. decided on 1891 that the referee should be transferred onto the field of play and that the umpires be relegated to the role of linesmen whose primary function was to indicate when the ball was out of play. 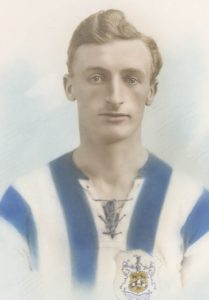 “Always play fair. Be ready to congratulate your conqueror and you’ll never be sorry for it”.

Sam Wadsworth was born in 1896 in Darwen Lancashire and began his career with St Cuthberts before joining his local team and then Blackburn Rovers. He was 17 when World War One broke out. He told the recruiting sergeant he was 18 and was told to come back in a month when he was 19. He did so and signed up with the Royal Garrison Artillery joining older brother Charlie in the French trenches.

The conflict left Sam with a shrapnel wound in his left ankle and Charlie was sadly killed after being wounded and volunteering to go back.

Returning to Rovers in 1919 he was told there was no place for him at the club and granted a free transfer. Sam’s initial response was to give up the game after thoughts of returning to it had kept him going during the war. His father talked him out of it and arranged for a trial with Central League team Nelson who quickly signed him. In 1921 Huddersfield handed over £1,600 for the left-back (he had been converted from centre-half).

With Herbert Chapman at the helm Huddersfield soon became the team of the 1920s and Sam played a big part. He was a key member of the team that won three 1st Division titles in a row as well as an F.A. Cup and was an England regular, skippering his country on four occasions.

He left Huddersfield in 1929 after making over 300 appearances for the Yorkshire club, and went to Burnley then Lytham of the Lancashire Combination. After hanging up his boots he moved to Holland and had a long and successful managerial career including twice taking charge of PSV Eindhoven.

Sam Wadsworth passed away in Eindhoven in 1961 aged 64. 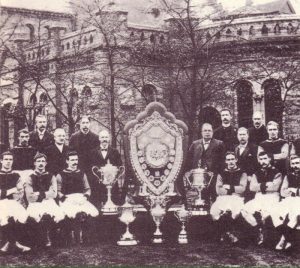 CLINCHING IT IN STYLE

There can have been few more impressive ends to the season than the one the Aston Villa produced at the close of the 1898-99 campaign.

Villa entered the last three matches, all at home, knowing that nothing other than three victories would give them the 1st Division crown. Not only were Villa adrift of Liverpool and had been in abysmal form, they also had an inferior goal average.

The first of the three was against eventual 5th-place finishers Notts County and they hammered the Nottingham side 6-1. Next up was a clash with relegation-threatened West Bromwich Albion who were on the receiving end of a 7-1 thrashing. The wins not only brought Villa level on points with the men from Merseyside, they also now led on goal average by 0.02 of a goal meaning that even a draw against the joint table-toppers in the final match would prove enough.

So Liverpool visited Villa Park in the title decider. In front of 41,000 fans, skipper Jack Devey scored early and led the team as they slaughtered their main rivals 5-0, making the goal average irrelevant and giving the Midland team the crown for the fourth time.

The defeat completed a dismal end to the season for Tom Watson’s Liverpool. In the F.A Cup semi-final against Sheffield United they had led 2-1 in the first game before shipping a late equaliser. In the replay they had been 2-0 and then 4-2 up but ended up drawing 4-4 after two goals in three minutes from Fred Preece. They then lost the second replay 1-0 to the Yorkshire club at the Baseball Ground.

It would take Watson’s men a full season to recover. The following year they lost their first eight matches, eventually recovering to finish in mid-table. Then in 1900-01 they captured the trophy for the first time.