AYRESOME Park served as home for Middlesbrough for 92 years before finally closing its doors in 1995 when the club moved to the Riverside Stadium.

Ayresome wasn’t the club’s first home. Founded in in 1876 by members of Middlesbrough Cricket Club, the team first played at the Archery Ground in Albert Park, spending three years there before the local parks department, wary of the damage being caused, told the club to find an alternative venue. They moved to a pitch at nearby Breckon Hill Road where they first charged for admission – 3d for adults, 1d of children, free for women. A dispute with the landlord over a proposed rent rise forced another move, this time to Linthorpe Road which had been home to the Cleveland FA who played representative matches there, and Middlesbrough spent the next 14 years there, extending the stand already located.

The closest the original team came to glory was a run to the last eight of the F.A. Cup in 1888. Having seen off Whitham and South Bank in the first two rounds they then met Sunderland and drew at Linthorpe Road before losing the replay 4-2. However, their opponents were then disqualified giving Boro’ a second chance.

Awarded a bye in the next round, Middlesbrough then hammered Old Foresters 4-0 at home setting up another home match in the quarter final, this time against Crewe Alexandra. However the run came to an end when this visitors picked up a 2-0 win.

An internal dispute over the desire of some players to turn professional saw a breakaway club, Middlesbrough Ironopolis, formed. Both the old and new teams turned pro and Middlesbrough played their first match as a ‘paid’ team in 1889 against Sunderland.

In 1892 Ironopolis were elected to the Football League and played at the Paradise Ground but they lasted a single season before folding due to financial difficulties. The original team meanwhile reverted to amateur status and plied their trade in the Northern League, winning the title on three occasions in the mid 1890s and capturing the Amateur Cup in 1895 and 1898.

It is said that one of their players at this time took his amateur status so seriously that not only did he refuse any offer of expenses, he also insisted of paying his admission fee to matches, even when he was playing!

In 1899 Middlesbrough were elected to the Football League and it was Linthorpe Road that hosted their first league match, a 3-1 defeat to Small Heath which was seen by a crowd of over 10,000.

The lease on the Linthorpe Road ground was due for renewal in 1903 and the club had already purchased land at Paradise Field, close to the former home of Ironopolis and were ready to build a new stadium and thus, Ayresome Park was born.

In fact preparations had begun on the new site two years before with extensive drainage work carried out and a number of gypsies moved off the land (allegedly leaving behind a curse). Linthorpe Road closed its doors on 25 April 1903 when another crowd of 10,000 watched a 1-1 draw with Stoke City.

To design the new stadium the club turned to famed football ground architect Archibald Leitch and they forked out a total of £11,957 for construction of their new home

KICKING OFF – WITH A LOSS 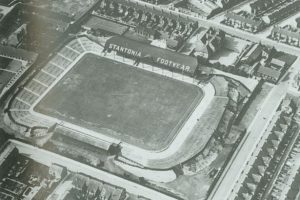 After a friendly against Celtic on August 7th brought 7,000 fans to the new stadium, last-minute preparations meant that Ayresome Park was, apart from a small section of the imposing new North stand which remained incomplete, ready for its opening league fixture eleven days later with ‘Boro, now in the top flight having been promoted in 1901-02, facing  local rivals Sunderland. Opposite the new stand was the 50ft long South stand which had been moved from Linthorpe Road when the club left their old home. Those two stands stood together for 32 years before a new South stand was built and opened in 1937

So, on 18 August 1903 crowd of 30,000 packed the new ground for that opening league match with receipts reported as £906. Everything went according to plan – apart from the result; home player Joe Cassidy got the first goal and ‘Boro led twice but eventually fell to a 3-2 defeat to their neighbours.

In 1905, the new stadium was chosen to host its first international match,between England and Ireland. A crowd of 25,500 saw the teams play out a 1-1 draw with local goalkeeper Reginald ‘Tim’ Williamson earning the first of his seven international caps to go along with a record 602 appearances for the club.

Two years after the move to Ayresome the team, battling to avoid relegation (eventually no team dropped out of the first division as it was expanded from 18 teams to 20), made history when signing Alf Common from Sunderland for £1,000, the game’s first four-figure transfer. The move paid off immediately with Common scoring the winner from the penalty spot on his debut against Sheffield United, another of his former clubs, and he fired in the goals that saw ‘Boro rise to 15th. The following season relegation was again a real threat but Common’s goals – he got 19 in 36 matches – saw them avoid the drop on goal difference.

The team further added to their strike force in 1906 with the £750 capture of Steve Bloomer from Derby County. Although by now approaching the veteran stage, Bloomer was still a formidable force and he scored 59 times in 125 games before returning to Derby in 1910. 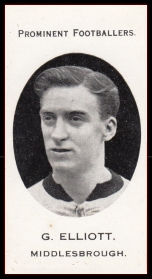 By the 1913-14 season both Common and Bloomer were long gone but the club managed what is still their highest-ever placing finishing 3rd behind Blackburn Rovers and Aston Villa. By this time chief goalscoring responsibilities had passed to George Elliott and he responded with 31 goals to finish as the 1st Division’s leading scorer.

Sunderland-born Elliott joined the club in 1909, giving up his job in Middlesbrough docks to join and would stay with the club until 1925, also guesting for Celtic during WW1.

Middlesbrough then placed him on the transfer list so Elliott, who also win three caps for England, promptly retired and went back to working As a cargo superintendent  having made 344 appearances for Boro scoring 205 goals.

Middlesbrough managed to maintain their place in the top division and posted their best finish to date in the 1913-14 season when they finished 3rd, although a distant eight points adrift of champions Blackburn Rovers.

The team were relegated in 1923-24 but the arrival of another goalscoring phenomenon propelled them back into the top flight.

County Durham-born George Camsell arrived from Durham City for £500 in 1925 and he aooeared only sparsely in his debut season with the club.

The following years in the second flight was a different story as he banged in 59 goals in 37 games and the team won the second division. Camsell continued to score, finding the net 37 times in the top division but it wasn’t enough as the team finished the season anchored to the bottom of the top division.

Middlesbrough won the 2nd Division again in 1928-29 and Camsell top-scored again with 33 and this time they would stay pit for 25 years, whilst the centre-forward carried on banging in the goals right up until his retirement at the outbreak of the Second World War.

Camsell finished his career with 325 goals in 418 games for the club and also scored 18 times in 9 games for his country, the best-ever goal-to-games ratio for England..

Few changes were made to the stadium until the new South stand went up in 1937. On 27 December 1949, with the game enjoying a post-war boom, the club set a new record for attendance when 53,802 watched them beat local rivals Newcastle 1-0.

After the war The Ayresome Park team maintained their place in the top division until they were relegate in 1953-54. They then uncovered another scoring machine But even his ince]reidble strike rate failed to get them back up.

Locally-born Brian Clough initially joined the club as a 16-year-old in 1951. He was allowed to leave for two years and played for Billingham Symphonia whilst also competing his national service in the R.A.F but returned to Ayresome Park in 1955.

Clough would stay at the club until a 1961 move to Sunderland and he scored 204 goals in 222 games during a time at the club that was punctuated by regular transfer requests and falling outs with teammates. After a 6-6 draw with Charlton sarcastically asked his teammates how many goals the team would need to score to actually win a game.

One of the players Clough did get along with was goalkeeper Peter Taylor and the pair would go on to form perhaps the greatest partnership in managerial history.

A sailor helps the North Korea team celebrate their success

In 1966 Ayresome was chosen, along with Roker Park, as one of the  North East hosts for the World Cup. The East End of the ground was covered and 4,000 new seats were added. Attendances proved disappointing but the ground became the ‘home’ of the North Korea team. After an opening defeat to Chile, the North Koreans forced a draw against Russia and then produced one of the biggest shocks in the history of the tournament overcoming Italy 1-0 to qualify for the last eight.

With the club continuing to enjoy limited success – the inaugural Anglo-Scottish Cup in 1975-76 was one of few trophies won – the mid 1980s brought financial problems. In 1986 they were forced to borrow money from the PFA to pay wages. The liquidator was brought in and the gates to Ayresome Park were locked. Fortunately, local businessman and lifelong fan Steve Gibson put together a consortium and completed a takeover with minutes to spare before the deadline to complete their Football League registration for the 1986-87 season. With the gates at Ayresome locked the first game of the season was played at Hartlepool’s Victoria Ground but the club were able to move back home shortly after.

OFF TO THE RIVERSIDE 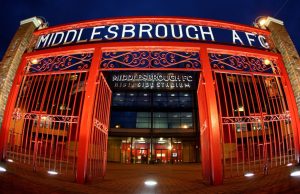 The original gates, now at the Riverside Stadium

In the early 1990s plans were drawn up for a new stadium on the banks of the River Tees and the final competitive game at Ayresome took place on 30 April 1995 where a 2-1 win over Luton Town secured promotion to the top flight. A testimonial game for goalkeeper Stephen Pears was the farewell match on the ground and it was used as a training facility the following season before being handed over the developers for the construction of a housing estate.

One of the sculptures on the former site of Ayresome Park

Whilst the main gates at Ayresome were moved to the new Riverside Stadium, remnants of the old stadium, including the wall at the famous Holgate End, remain. There are also a number of small sculptures dotted around the new development – a pair of boots on the former centre-spot, a football where one of the penalty spots used to be, a mound of earth where Pak Doo Ik scored the historic goal for the North Koreans against Italy. Also, many of the street names have Football in connections – The Midfield, The Turnstile, The Holgate – so there is no forgetting what used to stand on the site.

Whilst Middlesbrough never won one of the sport’s major trophies whilst playing at Ayresome Park. It was always a formidable place for away teams, and fans, to visit. In fact on many occasions their home record kept the club in top-flight football. The Riverside is an excellent new stadium with great facilities but, as in many cases when teams move on, the spiritual heart of Middlesbrough remains at Ayresome Park