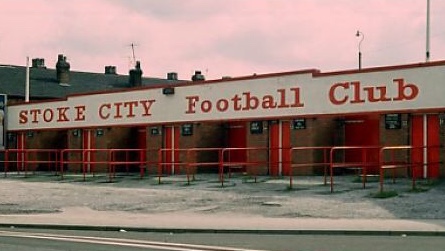 Having been opened in 1878, The Victoria Ground, and Stoke City suffered some major blows, but survived them for 119 years before finally closing for business in 1997..

The Stoke club was originally formed in 1863 as Stoke Ramblers by members of the famous Charterhouse School while they were working as apprentices at the North Staffordshire Railway. Their original home ground was called Sweetings Field but in 1878 the club merged with Stoke Victoria Cricket Club and moved their home to the Athletic club ground which soon became known as the Victoria Ground. The first match played at the new ground was the final of the 1878 Staffordshire County Cup with the new home team running out 1-0 winners over Talke Rangers with a crowd of 2,500 in attendance.

In 1885 the club turned professional three years later they became one of the 12 founder-members of the Football League. The first league match in the club’s history took place at the ‘Vic’ with a crowd of 4,524 witnessing a 2-0 defeat by West Bromwich Albion giving the visitors the honour of being the first-ever team to top the table. The loss was a foretaste of results to come as Stoke finished bottom of the table in each of the first two seasons of the new competition. The second of these resulted in the club losing their place and they joined the Football Alliance but immediate success saw them back in the League a year later, a place they retained for 15 years.

Despite the team’s lack of success, the Victoria was considered one of the top Grounds in the Football League. In 1889 it hosted the international between England and Wales and four years later staged the same match-up.

After another relegation in 1907 the club, and the ground, fell on hard times. They went bankrupt and the Vic was declared the worst in football. Stoke turned to non-league football where they remained until football resumed after the First World War. By the time they returned in 1919 the club had purchased the freehold of the Victoria Ground, constructed the 1,000-seater Main Stand, added two covered terraces and increased overall capacity to 50,000. The stand was rebuilt in the 1920s and a second stand was added opposite and then in 1930 the famous Boothen End terrace was constructed complete with roof. 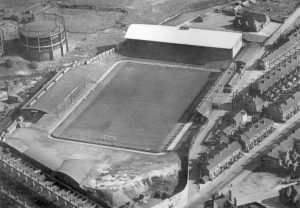 The Victoria Ground in the 1920s

In 1925 Stoke was granted city status and three years later the club officially changed their name to Stoke City FC. 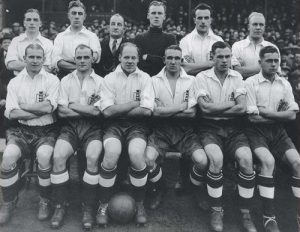 The mid-1930s were something of a golden time for the ground. In 1935 the Butler Street Stand was built with terracing at the front and the following year the Vic was chosen to host the game between England and Ireland. The match, the third and final international staged at the stadium, saw the hosts run out 3-1 winners in front of 47,882 fans with goals from Raich Carter, Cliff Bastin and Fred Worrell. Then, in March of 1937 a record 51,380 crowd packed the ground for the First Division match with Arsenal, setting the attendance record.

Shortly after World War 2, City came closest to capturing their biggest prize. A full football programme resumed for the first time in 1946-47 and entering the season’s final day Stoke had every chance of claiming the title. But a 3-1 defeat to Sheffield United saw them slump to 4th, still their highest-ever finish. 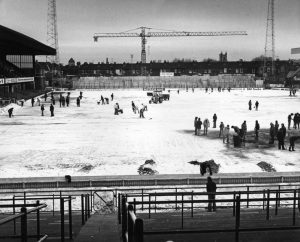 The greatest array of talent ever assembled at the Victoria Ground – and perhaps at any football ground ever – was the group of players who turned out on 28 April 1965 to honour Sir Stanley Matthews in his farewell match. 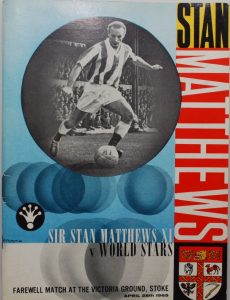 And nobody would have wanted to show up late. The pre-match ‘veterans game’ featured the likes of Tom Finney, Bert Trautmann, Nat Lofthouse and Stan Mortensen!

A crowd of 35,000 showed their appreciation for Sir Stan who began and ended his professional career at the Victoria Ground and it is said that over 110 million viewed the game worldwide on television. 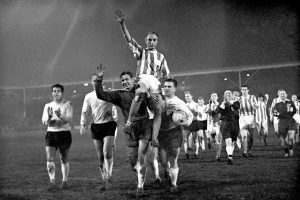 The match finished 6-4 to the ‘Internationals’ and Sir Stanley was chaired from the pitch by Yashin and Puskas as the crowd serenaded their hero with ‘Auld Lang Syne’. 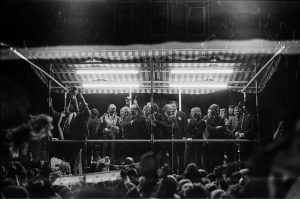 The 1971-72 season saw a major trophy finally end up at the Victoria Ground as City fought their way to victory in the League Cup. After battling their way to Wembley – a run culminating in an epic semi-final 2nd replay win over West Ham – Tony Waddington’s men went into the final against Chelsea as clear underdogs. But goals from Terry Conroy and George Eastham brought the barren run of 94 years without a major success to an end. 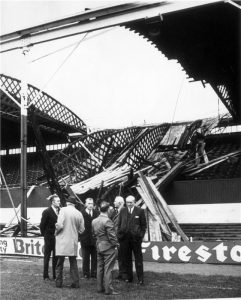 In 1976 natural disaster almost caused the collapse of the club. Gale force winds saw the roof of the Butler Street Stand ripped off. The the stadium unsafe, City were forced to play at nearby Port Vale. And with the stand under-insured the club were forced to sell off some of their major assets, including inspirational skipper Jimmy Greenhoff, much to his dismay, to pay for the necessary repairs.

Perhaps one of the more unusual aspects of the club has nothing to do with the stadium but everything to do with ‘that’ song. So, why Delilah? There are different stories but our favourite dates back to the 1970s when the Sensational Alex Harvey Band, supported Yes at a concert at the Vic. They sang their version of the Tom Jones song which they had recently had a top-ten hit with. Fans joined in, some of whom were clearly fans of the football club. They kept on singing it, and still do to this day.

On 4 May 1997 the club came full circle. The last League game played at the Vic was against West Bromwich Albion – as was the first. This time the result was reversed as, in front of 22,500 fans City ran out 2-1 winners.

Always known for providing it’s visiting team, and fans, with an intimidating ‘welcome’, the Victoria Ground saw some memorable moments over it’s 119 years. After 20 years at their new home, City fans are still waiting for those memories to be rekindled.