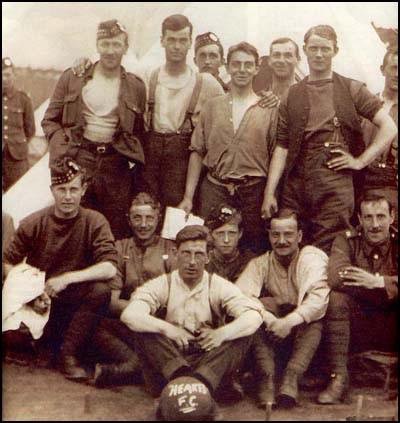 Come pack up your footballs and scarves of maroon

Leave all your sweethearts in Auld Reekie toon

Fall in wi’ the lads for they’re off and away

To take on the bold Hun with old Geordie McCrae 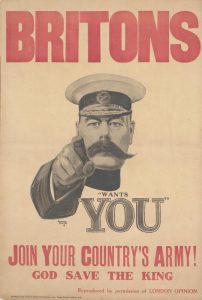 IN the build-up and in the early stages of World War One the British Army started campaigning to get more recruits to sign up. The famous ‘Wants You’ poster campaign featuring Lord Kitchener’s pointing finger led the way but another form of recruitment was the creation of ‘Pals Battalions’.

The idea, originating from General Sir Henry Rawlinson, was that groups of friends, neighbours, work colleagues, etc would sign up and be able to serve together rather than being assigned to different battalions. Rawlinson appealed to London stockbrokers to set an example and 1600 men signed up to join the 10th Service Battalion of the Royal Fusiliers within a week.

In Liverpool, the Earl of Derby followed Rawlinson’s lead creating a new battalion and saying, “This should be a battalion of pals, a battalion in which friends from the same office will fight shoulder to shoulder for the honour of Britain and the credit of Liverpool”. Within 2 days 1500 had joined and eventually 4 new battalions of the Kings Regiment (Liverpool) were created. Another of those to support the call to arms was Sir Arthur Conan-Doyle who made a direct appeal to footballers to volunteer. 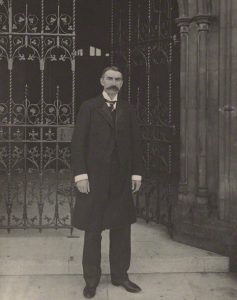 Sir George McCrae, a former Liberal MP for Edinburgh East, had volunteered for service in 1914 and would go on to raise the 16th Battalion the Royal Scots.

Born illegitimately in poor circumstances in Aberdeen, McCrae built up a successful textile business and was knighted in 1908. Initially elected as an MP in 1899 he resigned his seat in the House of Commons in 1909 to take up a post as President of the Scottish Local Government Board 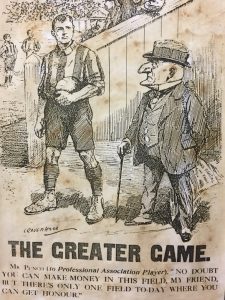 Heart of Midlothian had begun the 1914-15 season with eight straight wins to sit top of the Scottish first division. There was heated public debate on whether football should continue after hostilities had broken out. Whilst play continued, two Hearts players, territorial Neil Moreland and former regular soldier George Sinclair had already been called up. Both were to survive the war although Moreland was injured.

Harry Rawson, a former Hearts director, asked the club to help with recruitment and supporters were canvassed on match days and asked to volunteer. A third player, Jimmy Speedie signed up after a match against Falkirk and joined the Queen’s Own Cameron Highlanders.

Players started to take part in weekly drill sessions where they were joined by a number from Hibernian. In early November McCrae announced that he intended to raise his battalion. Later that month, on November 25th, 11 of the squad signed up on the same day with a further two joining the following day to bring the total number of Hearts players who had enlisted up to 16. They were joined by players from Hibs, Dunfermline, Raith Rovers and Falkirk with a total of over 30 signing up. The Hearts captain, Bob Mercer was initially turned down when trying to enlist due to a long-standing cruciate injury. 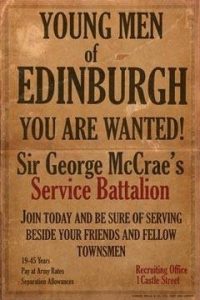 At least 500 Hearts fans and a further 150 from Hibernian also signed up to join the 16th, with a total of 1350 joining up in just six days. This started a trend which would be continued by the 17th Middlesex among others, as Footballers Battalions added greatly to the recruitment campaign with fans encouraged by the possibility of signing up to fight alongside their heroes.

On the field Hearts’ excellent run of results continued until close to the end of the season when, perhaps exhausted by the military training exertions, and with a number of their players missing games their form fell off allowing Celtic to come through late to snatch the title. On one occasion the players returned from a night march and immediately boarded the train to Greenock where they lost 2-0 to Morton. 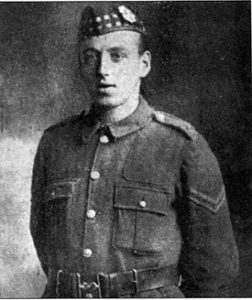 In the summer of 1915 the 16th Battalion moved to Yorkshire to continue their training at Ripon. While they were stationed there Tom Gracie (above), who had broken the club’s scoring record when hitting 28 in the 1914-15 season had already been ill on a number of occasions, though he had kept the illness secret from almost everyone, and his condition deteriorated. He was transferred to Stobhill War hospital in Glasgow. Gracie had leukaemia from which he passed away in October 1915.

The 16th Battalion moved to France in January 1916 and started on the Western Front in February. The first professional footballing member of McCrae’s Battalion to lose his life was Raith Rovers player Jimmy Todd who, on 12th March was struck in the chest by shell fragments at Armentières.

The Battle of the Somme began on 1 July 1916 and on the first day of fighting Hearts teammates Duncan Currie, Ernest Ellis and Henry Wattie all lost their lives. 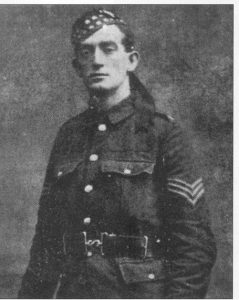 Currie (above), a full-back, was from a footballing family, his father was a pro, while brother Robert also played for Hearts and another brother played for Leicester Fosse. Ellis (below), an Englishman, had a daughter born after he left for France who would never get to see her father. Wattie, 23 when he died, was considered sure to be a Scottish International of the future. His body was never recovered. 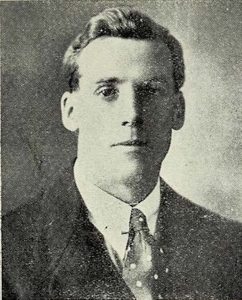 On the same day four more players Alfred Briggs, Paddy Crossan, James Hazeldean and Edward Maguire were injured. Briggs was so badly injured with injuries to head, arm, leg, ankle and foot (all received within 30 minutes of fighting commencing), that he was placed among the ‘hopeless cases’ but somehow survived. 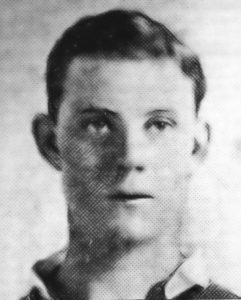 Crossan (above) was buried alive when a shell exploded and spent three days crawling through no-man’s land before finally making it back to British lines. His right leg was so badly injured that it was labelled for amputation. He pleaded with the German P.O.W. surgeon saying; “I need my legs – I’m a Footballer”. The leg was saved and Crossan served on the Western Front where he was gassed in 1918. He died in 1933 aged 39 of tuberculosis initially brought on by the gassing.

In total 814 of McCrae’s went ‘over the top’ on 1st July. Of these 636 were killed or injured. In fact The Somme brought about the end of a huge number of the Pals Battalions. Some suffered even worse on the day than McCrae’s; the Leeds Pals for example lost around 750 of the 900 who participated on a single day in which the army as a whole suffered 60,000 casualties, 20,000 of whom lost their lives. 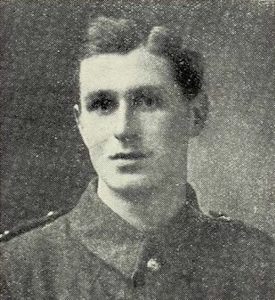 The last of the Hearts players to die on the Somme was James Boyd (above), a goalkeeper whose elder brother Archie had also kept goal for the club. Just 21 years old, Boyd was injured on 3rd August and moved to a field hospital which was later hit by artillery fire.

Sadly there was yet one more Hearts man to lose his life during the conflict. John Allan who had joined the 9th Battalion Royal Scots lost his life in the Battle of Arras after getting caught in deadly crossfire.

Although it is chiefly remembered for the footballers in its ranks (including amateur teams players from over 75 clubs joined up), McCrae’s had among its number some of the top men from a wide array of sports including rugby, athletics, sprinting and even cricket. The man famed for being ‘Scotland’s strongest’ Murdoch McLeod, known for winning numerous strongman competitions was also killed on the first day of the Somme.

Eleven days before the outbreak of war, Hearts had beaten defending champions Celtic 2-0 at Tynecastle. Within two years, four members of the team that took the field that day were dead and five others had been wounded in action. 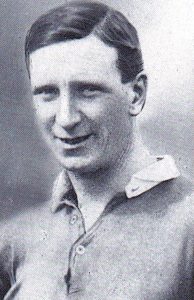 The stories of Speedie, Gracie and Ellis, along with all the others who lost their lives have huge sadness. Perhaps as poignant as these is the fate of Mercer (above), skipper of the team. Despite being turned down initially due to the injury he was eventually conscripted in 1916. He suffered severe lung damage after being gassed in the last year of the war, but survived.

In 1924, having retired he was persuaded to return for a farewell appearance in a friendly match against former club Selkirk at Ettrick Park. Just 10 minutes into the game he collapsed with a shriek, after suffering a fatal heart attack brought on by his previous health problems. He was 34. 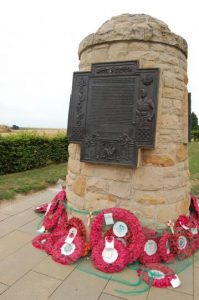 In 2004 work was completed on a cairn erected by the Great War Memorial Committee. The cairn, which was built by craftsmen from Morayshire, was erected on a plot of land gifted by the village of Contalmaison and it includes the plaque featured below. 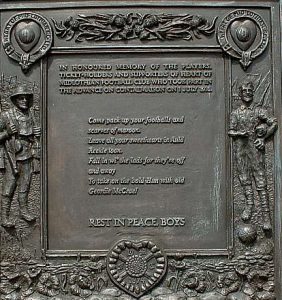 In 1918 Hearts manager John McCartney said: “The city’s manhood gave up everything for the precious opportunity of fighting for the greatest of causes, the freedom of the universe”. 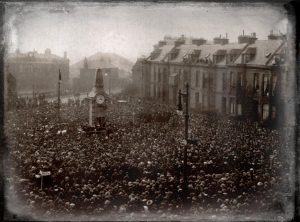 On 9th April 1922, four short years after the end of the First World War and on the fifth anniversary of the Battle of Arras that claimed the life of John Allan, Heart of Midlothian unveiled a Memorial clock tower in Haymarket Edinburgh. Secretary for Scotland Robert Munro told the crowd of over 65,000 that the country owed a debt of gratitude to Hearts that could never be repaid.

The full tally of Heart of Midlothian players who lost their lives either in the war or after it from injuries suffered during the conflict is 11. More than that again were wounded or suffered other injuries in action. A small number compared to the 18 million who died in total, but their story, one of pride, teamwork and bravery, is powerful, and one that should never be forgotten.

The young men of Hearts, like many who signed up, did so knowing they were going to ‘fight the good fight’. Of course they cannot have imagined the hell they would face and would have had no idea how many would not come back. They paid the ultimate price and all we can do is echo the words on the bottom of that plaque at Contalmaison; ‘Rest in peace boys.’