THE BATTLE OF HIGHBURY 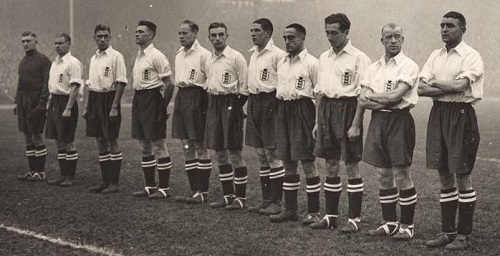 AFTER resigning from FIFA in 1919 in protest at Germany, Austria and Hungary being allowed to join, the Home Nations steadfastly refused to take part when the World Cup was launched in 1930. 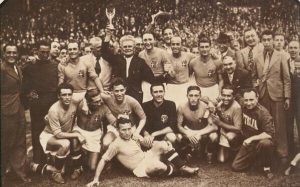 With Italy hosting the 1934 tournament, the country’s leader Benito Mussolini was determined to achieve success. He reversed the decision banning foreigners from playing professional football in his country and three Argentineans – Luis Felipe Monti, Enrique Guaita and Raimundo Orsi – played as naturalised Italians (Oriundi) and were key members in the team that captured the Jules Rimet trophy.

In the year prior to their World Cup win Italy had met England in Rome, their first ever meeting, where a largely inexperienced English team earned a 1-1 draw thanks to a goal from Cliff Bastin.

In November 1934, five months after winning the trophy Italy visited London to play England in a game which became known as ‘The Battle of Highbury’.

The England selectors had again picked a largely inexperienced team. Derby County’s Tom ‘Snowy’ Cooper was originally chosen as captain but he had to withdraw through injury and was replaced by debutant George Male of Arsenal. Another Gunner, Ted Drake, was also called up for the first time after first Fred Tilson then George Hunt were forced to pull out.

Eddie Hapgood was made captain after Cooper’s withdrawal and the inclusion of Male and Drake brought the Arsenal contingent to seven, still the highest number of players from one club to represent England in a match. One of the four non-Gunners in the line-up was 19-year-old Stanley Matthews, making a second start for his country. 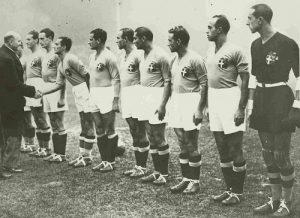 Italy lined up with nine of the players who had won the World Cup and were apparently armed with incentives to win from Mussolini, including cash, new Alfa-Romeo cars and exemption from national service.

Prior to the match the Italians had left their central London hotel and walked along Whitehall to pay homage to the fallen at the Cenotaph. There they placed a large wreath then stood silent for two minutes with their arms raised in facist salute (footage available on the British Pathe website). 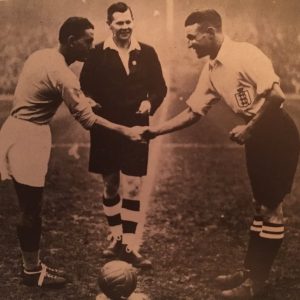 On the day of the match business reportedly ground to a halt in Italy as frenzied fans, including Mussolini himself, were glued to the radio broadcast.

It was against this backdrop that the match, watched by Prince Arthur of Connaught, Italian Ambassador Count Grandi and 56,044 fans, kicked off. And kick-off it certainly did.

After two minutes Drake clashed with Monti leaving him with a broken foot. The naturalised Italian carried on for 15 minutes but eventually limped off to leave his team down to 10 men. By then they were 3 down. Brook atoned for his penalty miss by scoring twice, with a header and a free-kick and Drake also netted to leave the Italians with a mountain to climb. 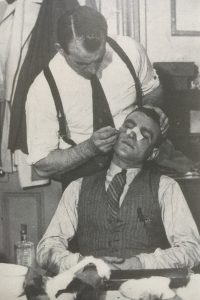 The Italians responded not with goals but with brutality. Hapgood (pictured above being tended to after the game) had to leave the pitch for 15 minutes after having his nose broken in a clash with Guaita, Brook suffered a broken arm. Drake, Male, Ray Bowden and Jack Barker were all injured.

Referee Olsen said after the match; “I had to pull the Italians up and I gave them an awful warning.

“I said to them ‘you must stop this rough, dirty play’”.

In the second-half the Italians started to use football skill rather than physicality to fight back. As the rain poured down, legendary forward Giuseppe Meazza struck twice and also hit the crossbar while goalkeeper Frank Moss made a string of fine saves and England held on for a famous 3-2 win, Italy’s 5th defeat in 35 matches. 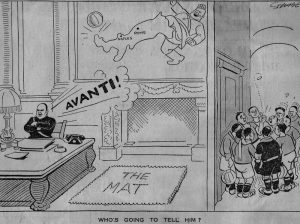 Press reaction the following day ranged from praise for the Italian fight back to some wondering if international matches should even be played. But England could claim, somewhat half-heartedly, to be unofficial ‘World champions’.

Four years later in France, with the spectre of facism growing ever larger, Italy would repeat their World Cup win. The home nations were, of course, absent again and would not compete until Brazil in 1950 when England were put firmly in their place.

The Battle of Highbury was clearly – and sadly – more than just a match. Much was put at stake on the outcome by the Italians and in particular, it seems, by Mussolini. It was one of those times when the question ‘is it only a game?’ could seriously be asked, and answered negatively.