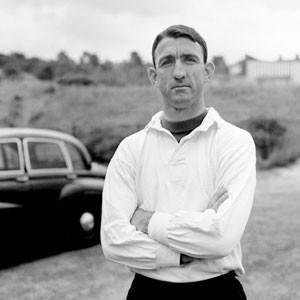 THE British transfer record set when Jackie Sewell moved to Sheffield Wednesday would stand for over four years. When it was finally broken, the new mark was set by a  club from overseas buying a player from an English club for the first time.

South African-born Eddie Firmani had caught the boat to Southampton along with future teammate Stuart Leary after being spotted by Charlton Athletic manager Jimmy Seed in his homeland playing for a team called Clyde in Cape Town. Seed invited the pair to London and they arrived in 1950 and both quickly made their mark at The Valley. 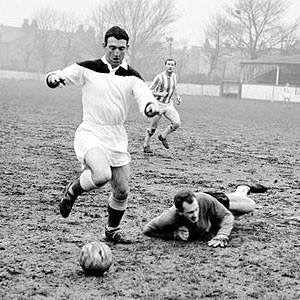 Firmani in action for Charlton

Firmani quickly earned a regular place in the Charlton team, becoming, along with Leary, part of a strong South African contingent at The Valley that already included John Hewie, Stan Lynn and Sid O’Linn in the line-up. Firmani spent some time playing at inside-left and also made appearances at full-back before settling into the centre-forward role where he soon began scoring goals at a decent clip. His form helped the South Londoners initially maintain their top flight place and then rise to a 5th-place finish in 1952-53, which remains their best post-war position. 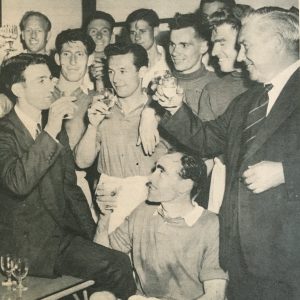 Other clubs started looking enviously at the Addicks’ new star and he came to wider attention when scoring twice for a London XI in an Inter Cities Fairs Cup match against Basle. The South-East London club resisted all offers until, in 1958, Italian club Torino began negotiations.

Firmani seemed all set to move to Turin when the son of the Sampdoria president flew to London armed with a cheque for £35,000, along with a great contract for the player – and he was Genoa-bound, leaving South East London behind having amassed a record of 51 goals in 112 games for the Valiants.

With the maximum wage still in force in English football the most Firmani could earn in the Football League was £15 per week during the season and £12 per week in summer. So a reported signing-on fee of £5,000 (the equivalent of over £125,000 in today’s money), plus wages including bonuses that would average out at around £50 a week was hardly likely to be turned down.

The big difference in salaries between the two countries came in the form of bonuses. A bonus for a win in England was normally £2 whereas in Italy it was £25 for a home win, £38 for one on the road and £12 for a draw along with an end-of-season payout based on league position. 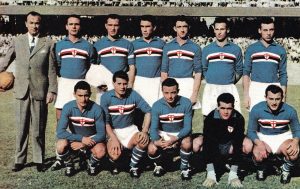 Another major difference in the rules between the two countries was that once a player signed with a team in England, he ‘belonged’ to them until they decided to transfer him. It was, in essence, a never-ending deal. When Firmani signed with Sampdoria it was a two-year deal after which he would be free to negotiate with any club. Should he re-sign he would be entitled to another signing-on fee, should they sell him in the meantime he would be entitled to 12% of the transfer fee. 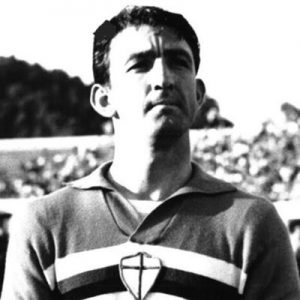 So 22-year-old Firmani, wife Pat (the daughter of Charlton assistant trainer George Robinson) and son Paul headed to Genoa. In doing so they were following in the footsteps of former Athletic player Hasse Jeppson. The Swedish international had enjoyed a short spell at The Valley in 1951 before moving to Italy four years before Firmani, joining first Atalanta and then Napoli. He no doubt gave his former teammate glowing reports on Serie A life.

The Italian government had placed a ban on overseas signings but this did not include those with ancestors from the country so with Firmani’s paternal grandfather coming from Italy it made him a target.

The Firmanis soon settled into their new life on the Italian Riviera and Eddie settled into football at the Stadio Luigi Ferraris, after initially struggling with the training techniques which he termed ‘balletic’. In three seasons with the club he scored 52 times in 63 appearances and earned a first call-up to the Italian national team in 1956. He would go on to win three caps for his adopted country and score twice. 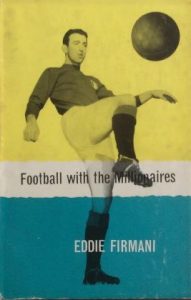 In 1960 he published his autobiography ‘Football with the Millionaires’ detailing his early life in South Africa, his time in London and the move to Italy that put his among the continent’s highest-earning players.

When the time came to leave Sampdoria, Firmani extended his Italian odyssey, spending three seasons with Inter then two more with Genoa (where he met up with and became firm friends with future England boss Fabio Capello who was then playing for SPAL). When he finally returned to the English game in 1963 his record in Italy stood at a healthy 125 goals in just over 200 games.

Whilst playing in Italy, Firmani admitted that football there was ‘harder and rougher’ than in England and said: “All the teams play the short-passing, hard-tackling continental style.

“At first I found it difficult to adapt myself but once I had adjusted my style to fit in with that of the other Sampdoria forwards I began to enjoy the games as much as I did those in England. 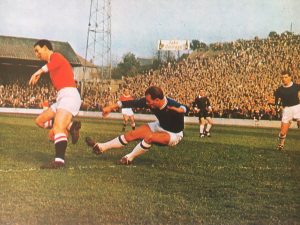 In 1963 the Firmani family decided it was time to end their stay in Italy and Eddie rejoined Charlton. Two years previously the maximum wage had been abolished thanks to the efforts of PFA Chairman Jimmy Hill, so he could now earn comparable amounts in his (first) adopted homeland.

By the time of his return Charlton were in the Second Division and, despite again scoring goals regularly, Firmani couldn’t lift them back up. He left for Southend United for two seasons but then returned for a third stint at The Valley before hanging up his boots in 1968. When he eventually retired he had compiled a tally of 238 goals in 440 games, across two countries, and set a record as the first player to score 100 goals both in Serie A and in Engliand. 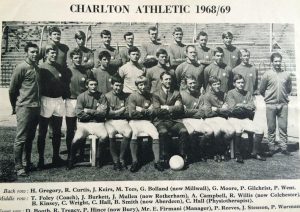 He retired to take over as manager at Charlton but, after an encouraging first season in charge the team struggled and he was eventually fired in 1970.

After a few years out of the game, Firmani resurfaced in America where he took up a post as manager at Tampa Bay Rowdies.

In America Firmani enjoyed great success. He won the 1975 title with Tampa Bay – a team that included a large number of former English league players like Clyde Best, Derek Smethurst, John Sissons, John Boyle and Stewart Jump – in his first year. Two years later he moved to New York Cosmos and, after the team added Carlos Alberto to the talents of Pele, Giorgio Chinaglia and Franz Beckenbauer already at the team’s disposal, won the title twice more, in 1977 and 1978. 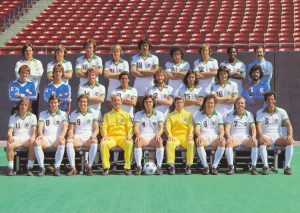 New York Cosmos, with Firmani at the helm

After the second title he fell out with Chinaglia, which effectively meant falling out with his best friend, Cosmos supremo Steve Ross and left the club.

Firmani’s next stop was Philadelphia, and he then followed the Fury team when they relocated Toronto. After a brief stop with Montreal and a return to New York he was off on his travels again.

Next, he spent five years in Kuwait where he won two titles and a Gulf Cup with Kazma S.C. as well as being held hostage for three months by Saddam Hussein’s forces after they invaded the country during the Gulf War.

Firmani spent the 1992-93 season in Oman, lifting his team Sur FC into the First Division and then it was back to America again where his last managerial job was with the New York / New Jersey Metro Stars (now Red Bulls) in the newly formed MLS in 1996.

Since then he has worked as a consultant for an artificial pitch company and last year was inducted into the Charlton Athletic Hall of Fame.

Eddie Firmani proved throughout his career to be a pioneer. Always willing to take on new challenges from the day he first stepped on the boat in Cape Town to being held captive by Saddam Hussein; Italy was just one stage in a career that spanned the football globe, and earned him a place in the record books.