THE BUSBY BABES AT THEIR BEST

On February 1 1958, Manchester United travelled to North London to take on Arsenal in a First Division match. Those leaving Highbury after the thrilling game knew they had seen a true classic.

What the reported 63,578 fans (although this figure was at least one higher as future Gunners star Pat Rice later admitted to sneaking in as an 8-year-old) who packed Highbury that day didn’t know as they returned home on that wet afternoon was they they had witnessed the final English performance of Matt Busby’s team. Five days later, the ‘Busby Babes’ would be cruelly ripped apart by the tragic disaster at Munich-Riem airport.

At the time of the Highbury match United, the two-time defending champions, were in second place. They had started the season poorly but were running into form having just beaten Bolton Wanderers 7-2 as they looked to close the gap on table-topping Wolves.

Busby’s team selection was the same as that which would be protecting a slender 2-1 lead from the first leg of their European Cup quarter-final tie against Red Star. This meant no place for regulars Jackie Blanchflower, Johnny Berry, David Pegg and Billy Whelan whilst Kenny Morgans and Albert Scanlon, both thought of as fringe players, were among those in the line-up.

Arsenal, meanwhile, we’re mired in mid-table but their fans were well aware of the team’s capabilities, proved later in the campaign when beating champions-to-be Wolves at Molineux. Their line-up included David Herd who was quickly establishing himself as a feared striker and who would eventually move to United. 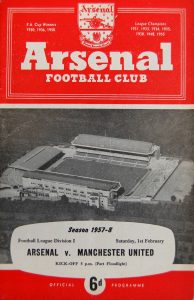 Left-winger Scanlon, who had mostly been cast as understudy to regular left-winger Pegg, was an infuriating player, capable on his day of beating the best but woefully inconsistent. This was to be one of his ‘on’ days. Arsenal were well aware of his capabilities and Gunners boss Jack Crayston had phoned Busby earlier in the week to enquire about his availability but was given short shrift. 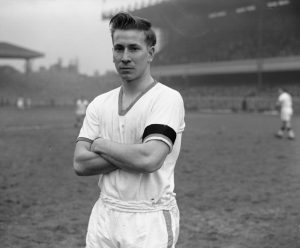 United, wearing black armbands after the death overnight of Director George Whittaker, turned in a first-half display which left few doubting that this was the most exciting club team English football had seen. Set up by Kenny Morgans, Duncan Edwards smashed home the opening goal from 25 yards after 10 minutes. Scanlon then took over, going on a 70-yard run before setting up Bobby Charlton to double the advantage and then sending over a pinpoint cross which Morgans knocked into the path of Tommy Taylor for the third.

Local fans (Rice included) whilst disappointed, were also in awe of the team they were watching. “They were brilliant” he recalled  some years later. Herd meanwhile, was in awe whilst competing against a club he would later join describing the first-half display as “stunning”.

Herd said; “I had never seen an English side do the things they did.

“We were all attacking teams but United did it at a different pace. In a way I was almost enjoying it”. 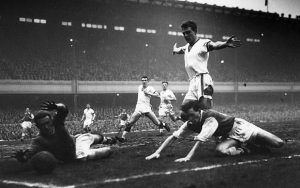 Then came the second half and an almost improbable fight back by the home team. Thirteen minutes into the second period the score was still 3-0. Amazingly, three minutes later it was 3-3. In the 58th minute Herd met a Dave Bowen cross to head home. A minute later Jimmy Bloomfield reduced the deficit to a single goal, and Tommy Taylor had barely kicked-off when Arsenal broke forward again and Bloomfield snatched the equaliser with a superb diving header.

Arsenal and their fans hardly had time to enjoy being on level terms. Within two minutes Scanlon against tormented full-back Stan Charlton before getting to the by-line to cross for Dennis Viollett to restore United’s lead. Taylor then doubled the advantage, his effort surprising Kelsey at his near post for his 131st goal for the club.

Still Arsenal weren’t done. Derek Tapscott scored an excellent goal forcing the visitors to hang on for the final fourteen minutes to complete a rousing and memorable win. Kelsey, many years later, said; “It was the finest match I have ever played in. It could have been 9-7”.

United line up in Belgrade

But 5-4 it was, and United went off to prepare for the match in Belgrade, which was another thriller, United earning a 3-3 draw against Red Star to progress to the semi-final.

Next up should have been a table-topping clash with Wolves but that was to be postponed as Busby’s brilliant babes were decimated in Munich.

Five of the players who took part in the thriller at Highbury – Roger Byrne, Eddie Colman, Mark Jones, Duncan Edwards and Tommy Taylor – were to lose their lives five days later along with David Pegg, Billy Whelan and Geoff Bent from the playing staff and 15 others. Johnny Berry and Jackie Blanchflower were among those to survive but neither was able to play football again.

Football was left to wonder just how good that United team might have become. Many, like Edwards, despite their brilliance, clearly had their best years ahead of them. 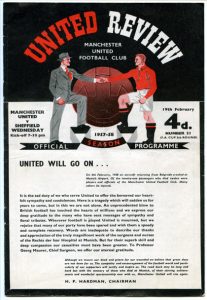 ‘United will go on’

United and stand-in boss Jimmy Murphy (who hadn’t travelled to Belgrade as he was with Wales for their World Cup qualifier against Israel) were left to search for replacements and were given time before playing their next match. Murphy brought in the likes of Stan Crowther and Ernie Taylor and they took the field against Sheffield Wednesday in the 5th round of the FA Cup with only Harry Gregg and Bill Foulkes from the team that had earned the draw in Belgrade. 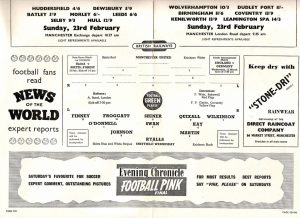 The empty line-up for the Sheffield Wednesday FA Cup match

United ran out 3-0 winners against Wednesday and would go on to reach the final where they lost to Bolton Wanderers. The European Cup dream ended with semi-final defeat to Milan and Matt Busby would have to wait ten years before finally bringing the crown to Old Trafford.

Those 63,578 fans (plus Pat Rice) who were at Highbury on that damp February day saw a thriller but were unaware that they were seeing the end, or at least the postponement of Busby’s, and United’s dream.