THE OTHER SHANKLY MANAGER

THE exploits of the great Bill Shankly need little repeating. An outstanding player with Preston North End and Scotland, ‘Shanks’ really found his groove in management.

An apprenticeship served with Carlisle United, Grimsby Town and Workington led to the opportunity to move to Huddersfield Town, first as reserve team manager and then taking control of the first team. Disillusionment with his best players being sold saw Shankly, known to all in his home as Willie, move on to Liverpool where he developed one of the finest sides English football has seen, while also nurturing a footballing philosophy and culture among fans and players at thte club that exists to this day.

In 1910, three years before Bill Shankly came into the world, brother Bob – Robert Fleming Blyth Shankly – was born in the Ayrshire mining village of Glenbuck. There were five brothers and five sisters. Every one of the men played professional football with Alec playing for Ayr United, Jimmy for Sheffield United and Portsmouth, John for Morton and Blackpool and Bill – most famously – for Preston North End and Scotland. Whilst Bob never reached Bill’s heights as a player, as a manager he also showed the special touch. 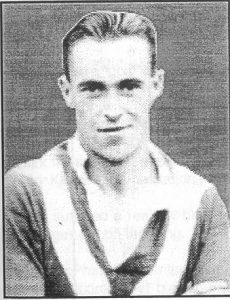 Shankly‘s playing career began with Auchinleck Talbot where he spent a season before moving on to the splendidly-named Glenbuck Cherrypickers in his home village, a club that all of the Shankly brothers played for Glenbuck itself is an amazing story. With a population hovering around 1000, the village produced no less than 50 professional footballers and seven Scotland internationals. Bob had a trial match for Ayr United, scored a hat-trick and got turned down, signing instead for Alloa Athletic. When his mining work took him south Bob spent some time with Tunbridge Wells Rangers but his most successful, and by far longest, spell as a player came at Falkirk. He played at total of 334 games for The Bairns, most as centre-half, some as centre-forward and also received his sole national-team recognition when called up to play for the Scottish League against the Irish League in 1937.

Whilst his playing career never quite reached the heights of his younger brother (and was often combined with working as a miner), moving into management was a much more serious – and ultimately successful – step.

In 1950 Bob took the reins at Falkirk, suffering relegation in his first season but leading the team back into the top flight the following year. He finally moved on in December 1956 having spent 24 years as a player and manager at the club and he left behind him a team that would go on to win the 1957 Scottish Cup. 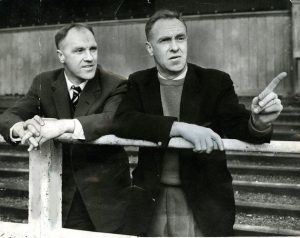 Two of the five Shankly brothers

Bob next had a relatively brief and uneventful spell with ill-fated Third Lanark, although he again left the club in good shape as shortly after his departure they reached the Scottish League Cup Final.

In the summer of 1959 Dundee manager Willie Thornton resigned after a disappointing season which included a shock Scottish Cup loss to Highland-League Fraserburgh. The club advertised the job and Bob applied. Another applicant was brother Bill, then managing Huddersfield Town, but it was the elder Shankly who won the role, and this led to his ‘golden spell’ in management. 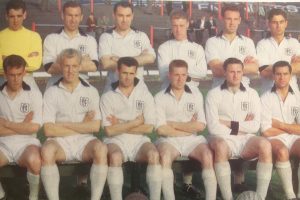 Dundee including Gilzean, Ure and Penman

In truth, Thornton had already assembled a good side at Dens Park and youngsters Alan Gilzean, Ian Ure and Andy Penman were on their way to top careers. But goalkeeper Bill Brown was sold to Spurs and when Everton offered a record £27,000 for Jimmy Gabriel, the club found it impossible to refuse. Dundee were regularly selling their best players at a profit and along with Brown and Gabriel, Gilzean and Ure later moved on to successful careers south of the border.

But perhaps Shankly’s masterstroke was the signing of 37-year-old Gordon Smith. The winger, dubbed ‘The Scottish Stanley Matthews’ early in his career, had been ‘pensioned off’ twice already by the time he arrived at Dens Park. Having won three league titles with Hibernian, ‘The Gay Gordon’ suffered continuing ankle problems and was released by the Edinburgh club.

After paying for an operation himself he promptly signed for capital-city rivals Hearts and won a further title as well as the Scottish League Cup, in his first season. The injury problems returned to impair Smith’s second season at Tynecastle and they released him. Shankly stepped in and snapped him up.

The signing was inspired. Smith linked up with Gilzean on the right side of the attack and they played a key role in 1961-62 when The Dark Blues caused a major upset in Scottish football.

Dundee had started the season in great form, including a 5-1 hammering of reigning champions Rangers and a 5-4 win against Raith after being 4-2 down with little more than half an hour remaining. They were clear at the head of the table at Christmas but a poor run of form brought them back to the pack. Shankly’s team got back on track and, needing a point from their final game to clinch the title they won 3-0 at St Johnstone with two goals from Gilzean and one from Penman. 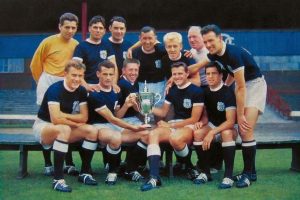 One of the major factors is Dundee’s first – and still only – Scottish title was the togetherness among the players, fostered by Shankly. “There was seven of us living in one house together,” recalled goalkeeper Pat Liney. “We lived together, played football together, went to the dancing together and became great friends together”.

Shankly based his approach on honesty. He was known to be very straight-talking with his players and whilst he was very much ‘old school’ in his approach, he was also said to be forward-thinking and always happy to adopt new ideas.

The title success led to a thrilling European Cup campaign. In the preliminary round they thumped F.C. Köln 8-1 at home with Gilzean grabbing a hat-trick making the 4-0 defeat in a bad-tempered away leg irrelevant. The game in Germany finished with soldiers of the British Army of the Rhine helping the Dundee players leave the pitch at full-time to evade angry home fans. 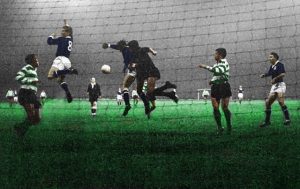 In the next round, after losing 1-0 in Portugal to Sporting, Shankly’s men turned things around with a 4-1 win at Dens Park – thanks in the main to another Gilzean treble. 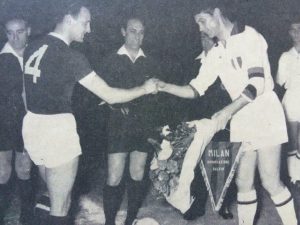 The Dark Blues overcame Anderlecht 6-2 in the quarter-final – it took Gilzean two games to get his three goals this time – to set up a semi-final against Milan. A 5-1 defeat in Italy proved too much to overcome and, despite Gilzean scoring yet again, Shankly’s men could manage only a single-goal success in the return leg and were eliminated by the eventual winners. 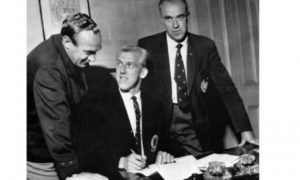 After that success the combination of ageing players hanging up their boots and the best younger ones being sold – Ure went to Arsenal in 1963 for £62,500 and Gilzean fetched 72,500 when joining Spurs the following year – made it tough for Shankly to keep his team challenging at the top. He continued to find and develop good players, the arrival of Charlie Cooke from Aberdeen being perhaps the most notable, but it was a difficult period and, despite an appearance in the 1964 Scottish Cup Final where they lost to double-winners Rangers bringing about another brief European foray in the Cup Winners Cup (and scoring an incredible 141 total goals that season) an early defeat to St Johnstone in the same competition in 1965 prompted his resignation and move to Hibernian. 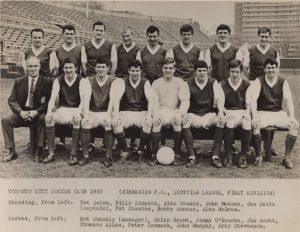 At Easter Road, Shankly took over from good friend Jock Stein who had moved to Celtic and recommended him as his successor. Although he led the team to a Scottish League Cup Final appearance, took charge when they competed as Toronto City in the U.S Soccer League and oversaw some fine performances in Europe he was again hampered by the sale of his best players and, in 1969 decided to retire.

He then took a part-time job as a scout for Nottingham Forest but was soon lured back into management at Stirling Albion, eventually moving on to become General Manager and then joining the board.

In 1975 he suffered serious injuries after being involved in a car accident along with Jock Stein but he survived, living for 7 more years before succumbing to a heart attack whilst attending an SFA meeting in 1982.

In 1999 Dundee renamed one of their stands ‘The Bob Shankly Stand’ a fitting honour to a man who was the key figure in their most successful period.

Bob’s death came just eight months after that of the younger brother in who’s shadow he had often been. But he did enough during that golden spell at Dens Park, and throughout his managerial career where he often laid the foundations for others to enjoy success, to prove that he too deserves a place among football’s managerial elite.