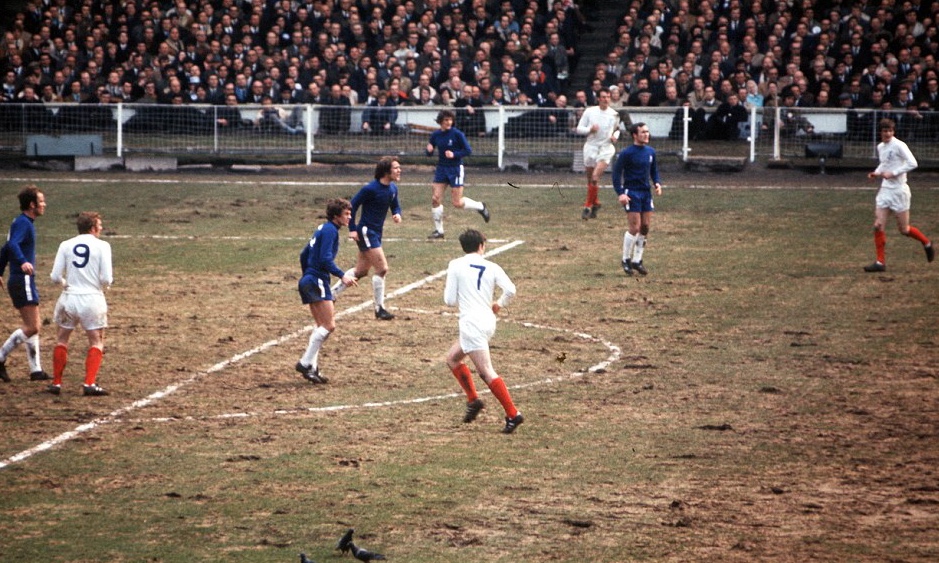 During interactions with our many wonderful followers on Twitter (what do you mean you don’t follow @theleaguemag ? You’re missing out!), there are a number of features which people clearly seem to hanker after from games gone.

Now we’re not about to suggest that we’d like things to revert to ‘the good old days’. Most of the improvements that have occurred over the last half century have undoubtedly improved the game, and in most cases people’s enjoyment of it. But still, we hanker occasionally for a simpler and In this case, muddier time.

The Baseball Ground and the 1970 FA Cup Final. Mention a sodden pitch where the ball would either skim across a sandy surface or get stuck in the mud with players trying -and often failing – to hack it out and the majority would associate that pitch, and that match as the best examples. 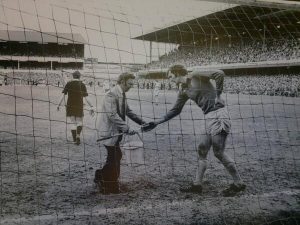 Derby County’s Baseball Ground certainly earned its accolade as the muddiest of them all. On one famous occasion, in 1977, the penalty spot was actually lost in the sea of mud during County’s 4-0 thrashing of Manchester City. The missing spot only came to light when the home team won a penalty forcing groundsman Bob Smith to come to the rescue with a pot of paint. City ‘keeper Joe Corrigan tried to help pace out the 12 yards and received a booking for his troubles. County eventually scored from the (new) spot.

Groundsman Smith, speaking to the ‘Derby Telegraph’ two years ago, recalls problems with drainage (‘atrocious’ recalls Bob), the pitch being 4ft below street level and that old chestnut ‘an abundance of knotweed’ as all being major contributors to his impossible task and recalls one match around Christmas time when ‘there wasn’t a single blade of grass on the pitch’.

Despite all of this, the Groundsman was asked by his manager no less, on two separate occasions to flood the pitch just before a match. Those games were against Benfica and Juventus in the European Cup and the Rams won the first and drew the second but were reported to UEFA. 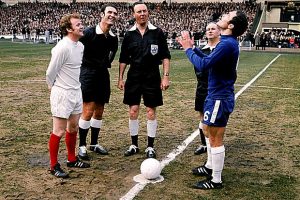 Bring on the Horses

The 1970 FA Cup Final between Chelsea and Leeds United should have been a real showpiece between the glamour team from the Kings Road and Don Revie’s all-conquering Yorkshire side who wanted to prove that their reputation as a kick-first-ask-questions-later outfit was undeserved.

With England set to head off to Mexico that summer to defend their World Cup, the FA decided to bring the match forward by a month, to give Sir Alf Ramsey’s men more time to prepare.

So an early April date saw the chance of wetter weather, and, more importantly, meant that the match took place a week after a major show-jumping event. Great piles of sand, along with some choice leftovers from the horses made football almost impossible to play in the middle of the pitch. In fact it didn’t make it too easy to play on the wings. Jack Charlton’s opening headed goal for Leeds was missed by both Ron Harris and Eddie McCreadie on the Chelsea goal line, both players clearly expecting the ball to bounce instead of plopping in the sand and almost coming to a halt before trickling over the line, whilst the London team’s equaliser was a speculative long-range shot from Peter Houseman which somehow managed to wriggle it’s way under Gary Sprake’s sprawling body.

Leeds clearly adapted better to the conditions, getting the ball out to the slightly-more-playable wings more often and using the speed and skill of Eddie Gray who gave David Webb a torrid time. Leeds led again but Chelsea fought to back equalise for a second time to send the match to Manchester for an at-the-time unprecedented replay played on a reasonable pitch.

That replay will be the subject of another post as probably the most ferocious match between two English teams ever!

So there we have it, two examples of the days when pitch conditions really did come into play. I’m sure everyone has their own memories. These days pitches are no longer the ‘great leveller’ they used to be, giving the lesser-skilled a fighting chance of overcoming the odds, and that’s surely a good thing.

But those sodden,muddy, almost unplayable pitches sure do bring back some fun memories! 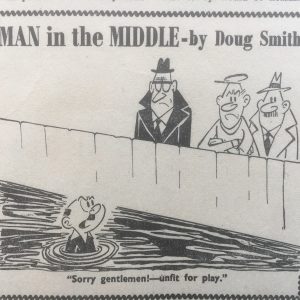