A MAN OF MANY CLUBS 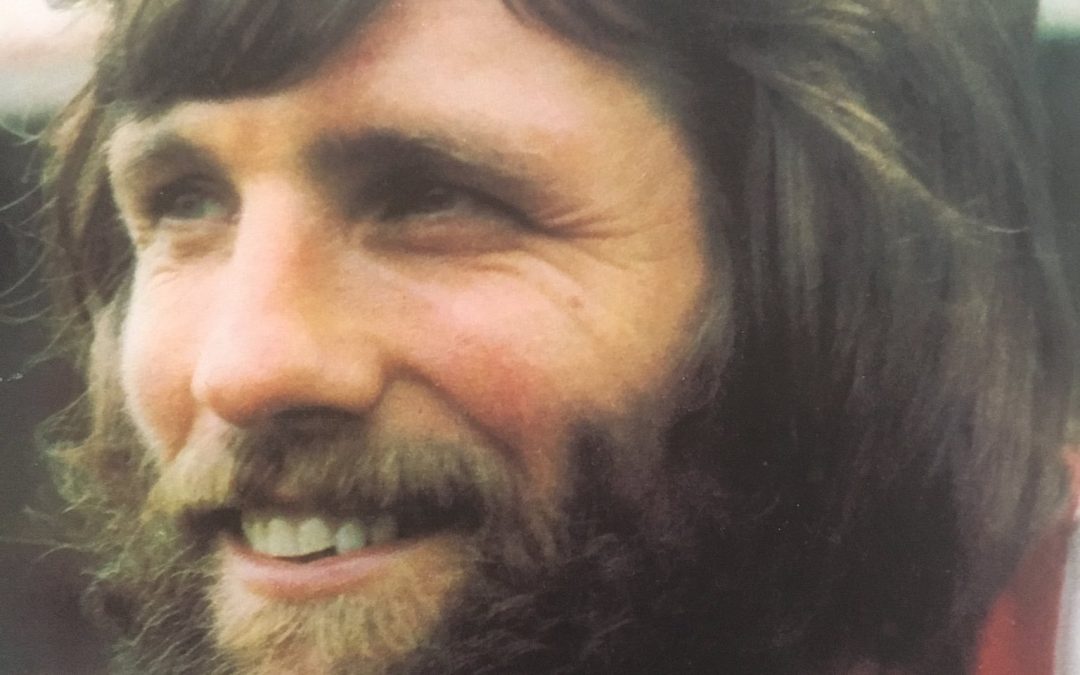 THIRTY years ago football lost one of it’s finest ‘journeymen’ when Keighley-born Trevor Hockey passed away suddenly from a heart attack at the age of just 43.

His Keighley birthplace was due to father being a professional Rugby League player with the local team. Albert had originally played Rugby Union at Scrum Half for both Abertillery and Wales before switching codes, and countries and moving to Yorkshire.

Trevor clearly preferred football and would later do plenty of switching of his own, changing clubs an amazing 12 times during an 18-year career. And it’s fair to say that he left a more-than favourable impression at just about every place he played, despite never really reaching football’s heights. Youngsters in his local area will also have fond memories as he had been doing great work in youth team coaching before his untimely death.

Trevor started his career as a winger, playing for the local Keighley Central Youth Club along with Yorkshire Schools and West Riding age-group teams before being spotted and snapped up by Bradford City.

After playing for the reserve team while still at school, Trevor made his Bantams debut against Shrewsbury Town in 1960, while still just 16 years old. He had also starred for the youth team against, among others, Manchester United whose manager Matt Busby was said to be sufficiently impressed to consider a bid. 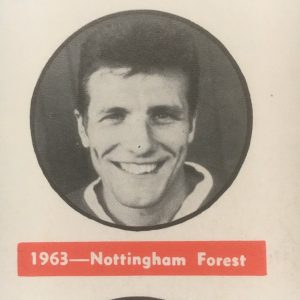 Busby‘s United weren’t the only team to have him on their radar and in 1961 Nottingham Forest paid City a club record £15,000 to take him to the City Ground. Thrust into a relegation battle Hockey helped his new team survive in the top flight and the following year was almost ever-present as Forest finished 9th and reached the F.A. Cup quarter-final. 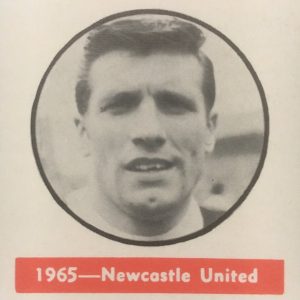 After just two seasons at Forest he was on the move again, this time dropping down a division to join Newcastle United (thereby completing the set of playing in all four divisions in just four years). After a disappointing first campaign at St James’ things picked up and he was part of the United team which captured the 2nd Division title. 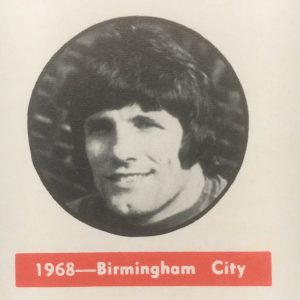 After three months in the top flight, where he barely missed a game, it was time for yet another move and another drop down to the second tier. Birmingham City splashed out £25,000 and Trevor returned to the Midlands.

Joe Mallett was the manager who signed Hockey but a short while after completing the deal he stepped down to the assistant’s role with the experienced Stan Cullis coming in as manager. The new boss promptly converted Hockey from the wing to midfield.

The change in position brought about a change in playing style for Trevor as he reinvented himself as the tough-tackling midfield man most now remember. It was also while at St Andrews that he developed the more ‘hirsute’ look that is also how he is pictured by those reminiscing these days. 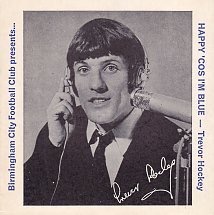 The new hairstyle seemed to bring another side of Hockey’s personality to the fore off the pitch. He released a single, ‘Happy Cos I’m Blue’, brought a pink piano, had a blue suede Triumph Herald and appeared regularly at the top of ‘best-looking footballer’ polls

It was at St Andrews that Hockey finally seemed to become settled on the pitch. The new position gave him a bigger role in matches and he was able to use his seemingly boundless energy and tough tackling to have a bigger influence on games {one journalist described him as ‘tousle-haired, tenacious and terrier-like’). He was eventually made skipper at City. 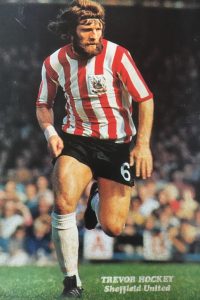 After making over 200 appearances for Birmingham, and helping them reach the semi-finals of both domestic cups, Hockey found himself on the move again, this time to Sheffield United for £40,000. Playing alongside Tony Currie he had the ‘simple’ task of winning the ball and giving it to his supremely-skilled midfield partner. Success in the role helped the Blades win promotion also brought him international recognition for the first time. 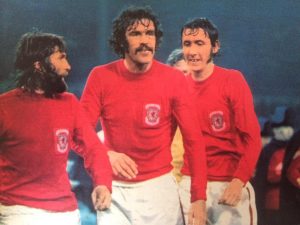 Hockey made his Wales debut in October 1971 in a 3-0 win over Finland at Wrexham, the goals coming from John Toshack, Alan Durban and Blades teammate Gil Reece. The country had taken advantage of a recent change in rules allowing players to represent the country of their parent’s birth. He would go on to make only nine appearances for his adopted country his only goal coming against Poland – and their famous ‘clown’ keeper Jan Tomaszewski – in a World Cup qualifier in Cardiff in 1973.

The new position came at a cost but it was one Hockey was willing to pay. Often in trouble with referees he incurred a number of suspensions and also became the player opposing fans would ritually boo, resenting his uncompromising style of play – whilst also no doubt wishing he was performing in the same style for them.

In fact off the pitch he was regularly praised for taking the time to chat with supporters and sign autographs, and seemed to enjoy the ‘bad-boy’ role he had now been cast into by the press. 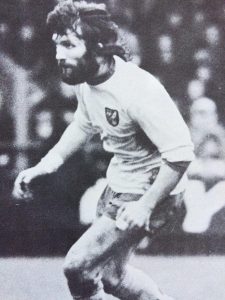 In a February 1972 match with Manchester City, Hockey suffered a broken leg in a clash with Mike Doyle, an injury which effectively ended his time at Bramall Lane and clearly slowed him down. A February 1973 move to Norwich City was brief, but helped keep the Canaries in the top flight. 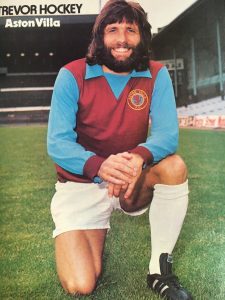 A difficult season at Aston Villa followed where injury limited him to just 24 appearances and he also got sent-off playing for his country in Poland, on what proved to be his final international appearance.

Hockey’s next move took him back to where it had all started, with a move to Bradford City where his playing time was again limited by injuries and it must be wondered if he ever truly recovered from that broken leg. 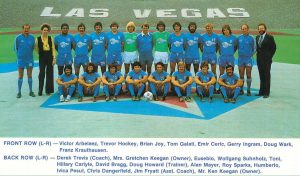 A brief trip to Ireland came next when Hockey took on the role of player-manager at Athlone Town then it was off across the Atlantic where he joined the San Diego Jaws (where he was named Player of the Season). The Jaws later became the Las Vegas Quicksilvers and he worked as player-coach 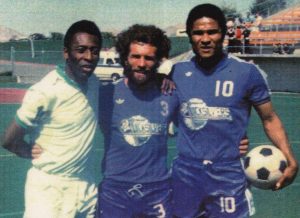 During his time in NASL, which also included a brief spell with San Jose Earthquakes, he lined up alongside Eusebio and against Pele but, again, injuries hampered him and he returned to play a handful of matches for Ashton United in the Northern Premier League before finally hanging up his boots.

He then moved back to his hometown with the ambition of building up a Keighley United team that would be able to compete in the Northern Premier League. That dream remained unfulfilled be he did fantastic work with soccer schools and coaching camps. He also spent some time as landlord of a local pub, The Lord Rodney, which with memorabilia from his career adorning the walls, was an ideal football fan’s destination.

Trevor Hockey passed away from a heart attack after taking part in a five-a-side tournament in Keighley in 1987, aged just 43. There might be those who say that at least he died enjoying the game he loved most but at such a young age and having already shown how much he enjoyed giving back through his coaching of kids, it must be considered a loss to football in Keighley, Yorkshire and indeed the football world.