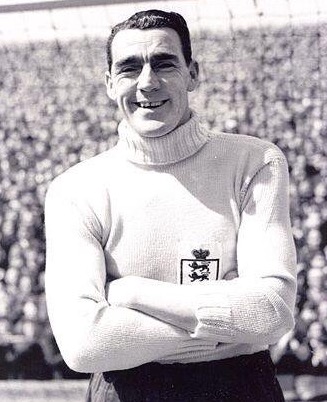 There is no doubt that the Munich air disaster of 1958 will forever be remembered as ‘The Day A Team Died’ (to borrow the title of Frank Taylor’s excellent book on that tragic day). But it was not just that group of Manchester United heroes who lost their life on that fateful snowy day.

Also lost were a number of football’s top journalists. Including a man who had been the game’s top goalkeeper before retiring and moving into the world of football reporting.

Frank Swift, whose league career was played exclusively (aside from wartime guest appearances) with United’s cross-city rivals was among a number of top journalists who died on that German runway.

Swift was idolised not just by City fans but those everywhere he played. His ebullient personality, and showmanship at times, earned him a place in football’s goalkeeping hierarchy and he is another of those who might have achieved even more were it not for World War Two.

Born in Blackpool on Boxing Day 1914, Swift played much of his early football on the local beach and was unable to get into his school team until elder brother Fred left

The younger Swift had the ideal mentor in his big brother who had signed for Blackpool but who would coach  his younger sibling and often return to watch school matches he played in.

Fred would go on to play for Oldham Athletic and Bolton Wanderers, Frank’s career would go even higher.

When he left school Frank worked in the family boat business – day trips in the summer, fishing in the winter and started his own senior career between the posts in the Lancashire Combination with Fleetwood before, at 18, he was offered a shot at the big time in the form of a trial for Manchester City.

The trial came in the shape of a game for City’s third team against a Stockport County eleven. He had little to do for most of the match then toward the end his opponents had a big chance. Swift pulled off a save with the nonchalance he would show many times throughout his career and the job was clinched although he was disappointed when offered only amateur terms and not the £8 per week professionals got at the time.

But a pro contract soon came and promotion through the ranks was rapid. The day before his 19th birthday Swift was picked to play his first game for City first team.

Christmas Day 1933 against Derby County was the debut day. It didn’t go well. Derby scored against him four times but it was the first of 209 consecutive first-team appearances which would bring Swift and City a league championship and an FA Cup. 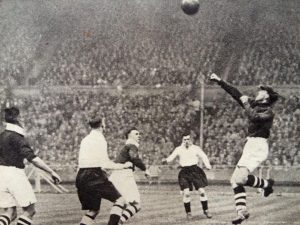 The FA Cup win came just five months after Swift had made his first-team debut. The final, against Portsmouth, was a dramatic affair. Pompey took the lead in the first half and held it right up until the 74th minute. The trophy seemed destined for the South coast until, with the Portsmouth centre-half receiving treatment for an injury behind the goal, Fred Tilson scored twice and City snatched victory. Tilson was fulfilling a promise having told Swift at half-time not to worry as he would ‘score a couple’.

At the final whistle, Swift fainted. Although some at the time claimed it was an act of showmanship, it would hardly have been surprising had the drama of the occasion got to a 19-year-old who had not appeared for his club’s first-team under six months before and who had watched the previous year’s final from the terraces as his team were swept aside by Everton.

Some time after, he was asked about the fainting incident and said; “I stopped in the back of the net to pick up my cap and gloves, took a couple of paces out to meet [teammate] Sam Cowan and everything went black. The next thing I knew I was lying on the turf and some clown was pouring cold water over me”. 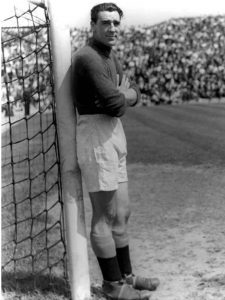 During the period leading up to World War Two, City were notoriously inconsistent. This was never more evident than the 1936-37 season when they were still in the bottom half of the table as Christmas approached. In fact they went through an awful period of just one win in twelve games.

The last two match before Christmas saw them lose 5-1 to Sheffield Wednesday and 5-3 to Grimsby Town. But, suddenly, everything clicked. Inspired by the mercurial talents of Peter Doherty, they went through the remainder of the campaign undefeated and clinched the title in their penultimate game with a 4-1 win over the same Wednesday team that had hammered them earlier in the campaign.

Amazingly the following season saw the club relegated underlining once again their inconsistency. They battled hard throughout the following campaign but missed out on an immediate return to the top flight, finishing 5th, and then league football was halted on the outbreak of war. 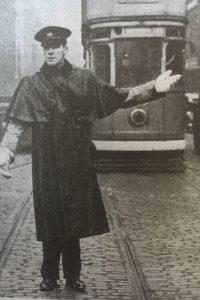 Directing the traffic: Swift on duty during World War Two.

Swift joined the Army soon after war broke out, although he would continue playing for City. He was stationed at Aldershot having signed up for the Army School of Physical Training and whilst there, played for the local team alongside greats such as Joe Mercer, Stan Cullis, Matt Busby (who had been a teammate at City) and Tommy Lawton. He also played a number of games for various Army XI’s and turned out as a guest player for Liverpool, Charlton Athletic, Fulham and Reading. He also spent some of the war years as a special constable in Manchester with responsibility for traffic control.

After the war, the goalkeeper resumed playing with his club and had a major role as they were quickly promoted back to the top flight, although the FA Cup and Championship he won with them prior to hostilities would remain his only major honours.

On international duty: Frank meets the Crown Prince of Sweden.

International recognition came late in Swift’s career. After making a number of appearances in wartime internationals, his full debut for England came in 1946 at the age of 32. He then became his country’s regular goalkeeper right up until his retirement and would finish with 19 international caps to go alongside 14 war-time appearances for his country.

One of those war time appearances was in France, and Frank and his teammates had a near miss when, in heavy cloud, the Dakota they were flying in came within 20 feet of another plane

In an international career that feature just two losses, perhaps Frank’s Perhaps his best day for England’s came when he skippered the team that visited Turin and recorded a surprise 4-0 win over Italy.  In Clifford Webb’s (one of the top journalists of the time) report he wrote of Swift; “He stepped from the goal early in the match scooped a high ball off the head of an Italian with his left hand, held the ball aloft as the opposing forward went headlong past him, and then coolly threw it to an England back who promptly set his side on the attack.”

That action, asserted Webb; “Had a mighty influence on the success of England against a team which all Europe thought would crush us into the ground.”

Swift hung up his boots relatively early, at 35, although having originally announced that he would quit at the end of the 1948-49 season (and having a parade in his honour) he made a brief comeback with four further appearance to kick off the following campaign after his replacement, Alec Thurlow, fell ill with tuberculosis. After retiring he remained involved with City as President of the Supporters Club, and they kept his registration as there had been a number of other clubs looking to tempt the big man back onto the pitch.

But there were no thoughts of another return. Swift had made it clear that he wanted to leave the game at the top, and, in showbiz style, he left his fans wanting more.

Upon his retirement Swift initially went into the catering and hotel business but was lured back to the game by the offer of a job in journalism and became a correspondent for the News of the World. 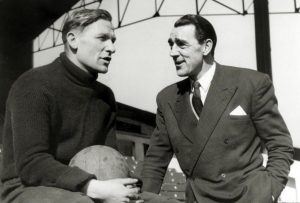 Manchester United, who had once tried to buy him from their big rivals, invited Swift to attend their European Cup game against Red Star in Belgrade and he went along, no doubt looking forward to seeing Matt Busby’s young stars take on top-class continental opposition.

That fateful plane crash, that in many ways changed the course of English football, did not take Swift’s life immediately. He died several hours later in Munich’s Rechts Der Isar Hospital. Doctors fought to save his life but admitted after that, had he survived he would have been ‘a hopeless invalid’.

Frank Swift lived his life doing the thing he loved most, playing and watching football. That he died pursuing the same, whilst undoubtedly sad, is also in some ways fitting.