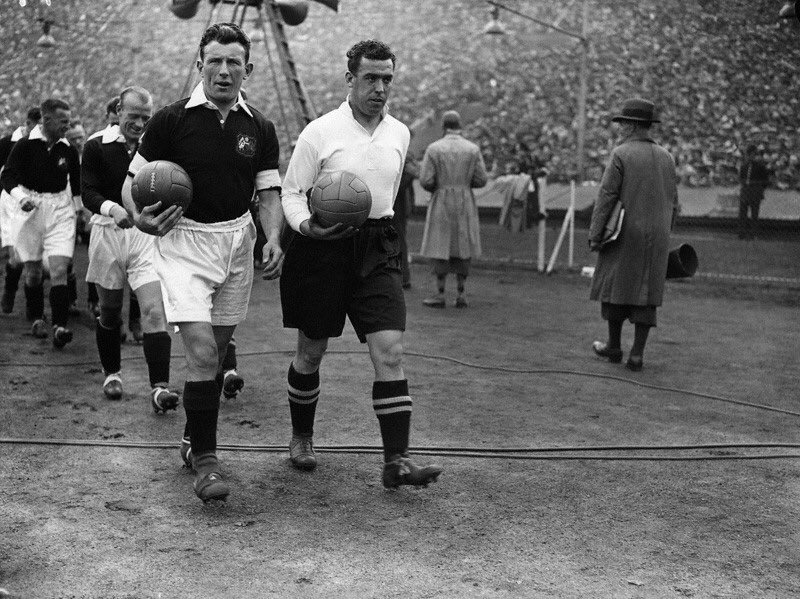 Every FA Cup provides a few great stories. Fine individual performances, famous giant-killings, the arrival onto the scene of new stars or new innovations. It seems that every time the Great tournament has been fought for, one or all of these has featured.

The 1932-33 tournament started with a clerical error and finished with an innovation that became integral to the game – and with the game’s biggest star lifting the coveted trophy.

The 3rd Round proper of the tournament featured one surprise entry. Brighton & Hove Albion of the 3rd Division (South) should have been exempt at this stage but their secretary failed to apply for the exemption so the FA made them compete.

And compete the Seagulls certainly did. After seeing off Crystal Palace on the road 2-1, the South coast side won at Wrexham in a replay, overcame 1st Division Chelsea at home and then beat Bradford Park Avenue to set up a 5th Round home tie with West Ham United. There, they battled to a 2-2 draw before finally falling 1-0 at the Boleyn Ground.

There were plenty of shocks elsewhere. In the 3rd Round, Chesterfield, who would end the season relegated from the 2nd Division, overcame Sheffield Wednesday, who would finish 3rd in the top flight, after a replay. Holders Newcastle lost 3-0 at home to Leeds United but by far the biggest shock of the season, and one of the biggest of all time, came when Arsenal, runners-up the previous year, took on Walsall.

Arsenal travelled to Fellows Park without four regulars after a flu epidemic ruled them out. The word was that they could have played at a push but Herbert Chapman decided it would be a good time to blood some youngsters. The Gunners still had the likes of Alex James, Cliff Bastin, George Male and David Jack in a side that would go on to be crowned champions of England. Walsall on the other hand were in the top half of the 3rd Division (North) but surely not capable of challenging the champs-to-be… 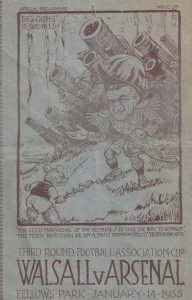 A crowd of 24,032 packed into the ground, although few could have expected an upset. One press report claimed that the cost of Arsenal’s boots – £87 – was £18 more than Walsall boss Bill Slade had spent assembling his team. In fact, the Gunners came into the match in less than top form, having not won in their last three away matches, including two defeats.

Arsenal wore their change strip of white shirts and black shorts, even though the home side had borrowed a set of Coventry City’s blue and white shirts knowing that as the home team in a cup tie the rule was that it was they who should change.

Walsall, knowing that if they allowed Arsenal to play they would be swept aside, immediately set about the Londoners. A set of crunching challenges left a number of the Gunners players on the floor and Chapman’s team took a long time to muster any real chances. When they did Joey Cunningham in the Walsall goal was equal to anything thrown at him.

As the second half started the packed crowd started to climb over the terrace wall and get closer and closer to the pitch, cheering and urging the Walsall players on.

On the hour mark a rare home attack resulted in a corner. Centre-forward Gilbert Alsop headed the cross towards goal, Arsenal ‘keeper Frank Moss pushed it away but Alsop was first to react and his second header beat Moss and found the net.

Walsall were in front but now had half an hour to hang on, and the siege started. Jack, James and Bastin all spurned chances and suddenly a long clearance found Bill Shepherd faced by reserve full back Thomas Black. The defender jumped in and Shepherd skipped past him only to be brought down inside the area. 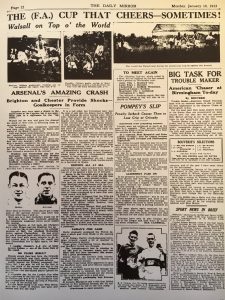 Shepherd himself got up to take the spot kick and easily beat Moss to double the lead. The mistake had serious repercussions for Black who was told after the match by Chapman that he was no longer required at the club and that his boots would be sent on to him. He joined Plymouth Argyle the following week and became a regular for the West Country club up until the outbreak of the 2nd World War. Recriminations for the loss didn’t end with Black. Two of the other Arsenal replacements, Warnes and Walsh, also carried the can, neither playing for the first team again and both being released at the end of the season. 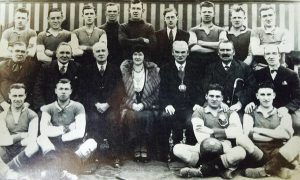 The match was Walsall’s one brush with glory. They were knocked out in the next round by Manchester City and would finish 5th in the 3rd Division (North) and remain at the same level for another 30 years. Meanwhile, Arsenal would finish the season as champions and, under Chapman, become the dominant force in English football.

After their win at Walsall in Round Four Manchester City came through tough trips to Bolton and Burnley to set up a semi-final with Derby County at Leeds Road. The other semi pitted champions Everton against 2nd Division strugglers West Ham United at Molineux. 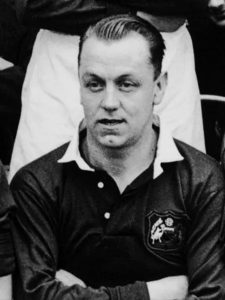 Derby, fired by the goals of Jack Bower, were enjoying a fine season and started slight favourites against their inconsistent opponents. Bower had scored eight times in the run to the last four but he failed to add to his tally in front of a crowd of 51,961. City, on one of their good days, raced into a 3-0 lead with goals from Ernie Toseland, Frank Tilson and Jimmy McMullan. Derby fought back in the closing stages with strikes from former Corinthian Howard Fabian and Sammy Crooks but it was not enough and the Maine Road club, who had reached the semi in the previous season only to be denied their shot at the big day by Arsenal, were on their way to Wembley. 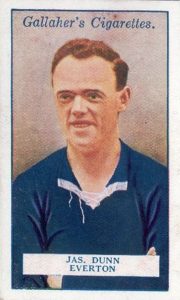 For the other semi, 37,936 were at Molineux to see Everton take on West Ham, who only narrowly avoided relegation from the 2nd Division that season. Dixie Dean led the Toffees attack but it was Former Wembley Wizard Jimmy Dunn and right-winger Ted Critchley who provided the goals that saw the Merseysiders make it to Wembley. Vic Watson had equalised Dunn’s early strike but Critchley, playing in place of injured Albert Geldard, grabbed the winner with seven minutes remaining after a mistake by Hammers defender Jim Barrett. 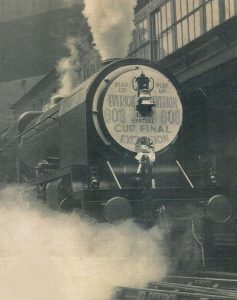 Injury worries hung over Dunn and Tilson. The Everton man was declared fit but City were without the services of Tilson. Also in the Everton line-up was international striker Tommy Johnson who joined the Toffees from the Maine Road club in 1930 after making over 300 appearances. With 158 goals, he was City’s record goalscorer at the time of the final despite lining up for their opponents. 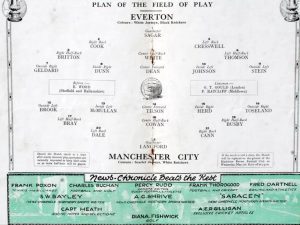 Both were wearing change kits, Manchester City in maroon shirts and Everton donning white and for the first time in an FA Cup Final the teams wore numbers with Everton lining up at 1-11 and their opponents 12-22 with the City order reversed – goalkeeper Len Langford wore 22 and forward Eric Brook number 12. 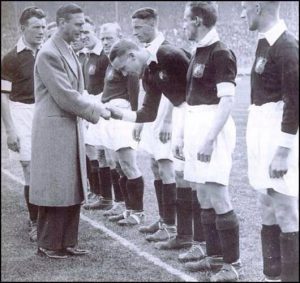 The match was played in the presence of the Duke and Duchess of York after the poor weather prevented King George V from attending, and also of the West Indies cricket team who were touring at the time. 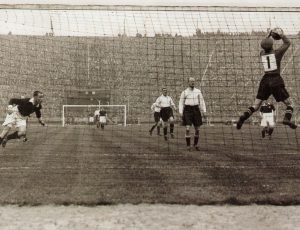 After pre-match preliminaries, performed by bands of the Irish Guards and the Royal Horse Guards were over, the match began. After an even start it was Everton who took control with Dean giving opposing skipper Sam Cowan a tough time and proving a constant threat to the City defence. 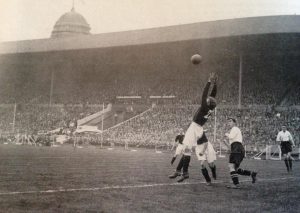 Matt Busby worked hard to supplement the City defence but they were under constant pressure and Ted Sagar at the other end had little to do. In the 40th minute the breakthrough came. Langford (who had something of a nightmare game) went to catch a cross from Cliff Britton but collided with Sid Cann and dropped the ball at the feet of Jimmy Stein who gleefully swept it home. 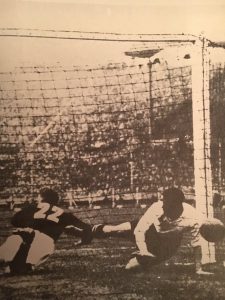 Seven minutes into the second period Langford went to collect another Britton cross but collided with Dean. Goalkeeper, forward and ball all ended up in the net, a goal was given and the lead was doubled. 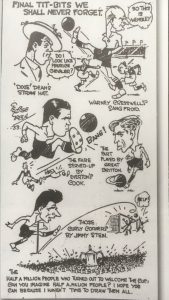 Everton, with the veteran Warney Cresswell outstanding, were dealing comfortably with all City’s attacks and Dunn wrapped up an easy win with a header from a corner. In fact the Toffees could have had a fourth; Johnson was about to shoot and looked set to score but referee Eddie Wood blew for full time and the Toffees had to settle for 3-0. 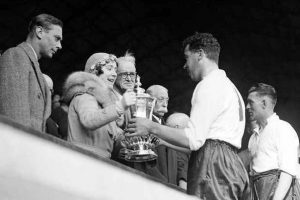 So it was Dixie Dean who went up to collect the cup from the Duchess of York. Dean’s fame had even reached the future Queen Mother who asked the Lord Mayor of Liverpool to point out players during the match. ‘That’s Dean’ said the Lord Mayor pointing to one player to which the Duchess replied; “Ah, even I know of Dean”.

The team returned to Lancashire with the trophy on the Monday evening, parading through the city in the same horse drawn carriage that had been used when they had last won the competition 27 years before. 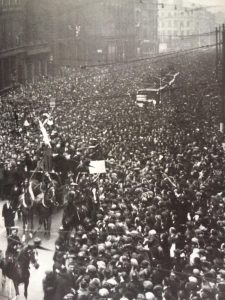 City meanwhile were left to bemoan their performance. “We never really got going except for the first 15 minutes” Sam Cowan said. “And I am only sorry we were all off our game at the same moment.

”But I have no quarrel; Dean was an inspirati

Cowan and City would have their moment of Wembley glory 12 months later when they got the better of Portsmouth to claim the trophy. But 1933 was Everton’s, and Dixie’s year as the team and their star player completed a three-year run that started with the 2nd Division title and ended with the Cup win – with a 1st Division Championship sandwiched in between to produce an unprecedented hat-trick. 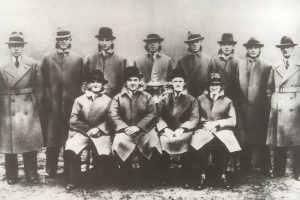