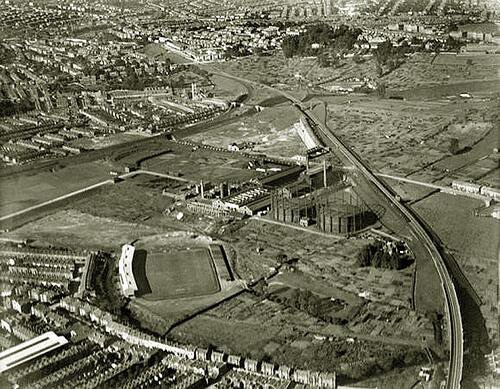 BRISTOL Rovers Football Club was formed in 1883 at a meeting organised by Bill Somerton, a local school teacher, in a  restaurant called The Eastville.

The club’s initial kit was all black and they decided to take their name from local rugby club The Arabs. Hence they decided on the name Black Arabs F.C. A gold sash was later added to the kit.

The Black Arabs played their early games on Purdown, in the North East of the city although due to the region being a rugby stronghold they found it hard to get regular fixtures. Their first match was an away game against Wotton-under-edge, a Gloucestershire team and resulted in a 6-0 defeat. They played 10 friendly matches in their first season and earned themselves the nickname ‘The Purdown Poachers’.

In 1884 the club changed their name to Eastville Rovers in an attempt to create their own identity and attract more players. The same year they moved their home matches to Three Acres, an open field with no changing facilities. They moved again the following season to Durham Down where they would spend the next six years.

It was all friendlies for Eastville Rovers until 1888 when they helped to create, and then entered, the Gloucestershire Cup. Their first official competitive game therefore, came against Clifton Association in that competition and they were beaten 4-1. The following season they won the cup, beating Warmley 1-0 in the final.

In 1890 they made it to the final of the Gloucestershire Cup but were beaten 7-2 by old rivals Clifton Association, the most memorable thing about the match being that it was refereed by the famous W.G. Grace.

1891 saw another new home after the club agreed a fee of £8 per year to play their matches at the Schoolmasters Cricket Ground in Horfield.

In 1892 Eastville Rovers became founder members of the Bristol & District League which would later become known as the Western League. During seven years in the competition Rovers failed to win the title, their best performance being a 2nd-place finish in 1895-96.

Meanwhile 1894-95 saw another move, this time to Ridgeway in the Fishponds area of Bristol and the season was also notable when a friendly match resulted in a 2-1 win for Bristol South End over Eastville Rovers in the first meeting of the two clubs that would go on to become Bristol City and Bristol Rovers.

In the 1895-96 season the club entered the FA Cup for the first time but their interest ended early when they were beaten 2-0 by old rivals Warmley in their debut match. The following season saw Rovers record their first wins in the competition seeing off Newbury and Bristol St George. Drawn away to Royal Artillery Portsmouth in the next round they club decided they had no chance of winning and withdrew from the competition.

It was during the 1896-97 season that the club became a limited company and, understanding the need for paying gates if they wished to progress, leased Stapleton Hill, home the Bristol Harlequins rugby club, and the ground that would become Eastville Stadium.

The new home had a wooden stand with 500 seats and a press box. The team played their first-ever match there on 3 April 1897, a 5-0 defeat to top-flight Aston Villa. 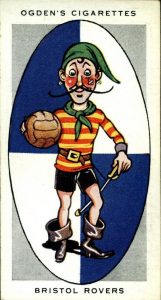 The stadium’s proximity to the gasworks earned the team the nickname of ‘The Gas’ with followers called ‘Gasheads’. They are also known as ‘The Pirates’ probably due to the city’s shipping links and possibly due to Bristol being the birthplace of Edward Teach, better known as the notorious ‘Blackbeard’..

As the end of the century approached and the team’s reputation grew outside the local area, they became more widely known as Bristol Eastville Rovers and 7 February 1899 officially changed their name to Bristol Rovers. Later that year they were admitted to the Southern League where they were to spend the next 20 years. 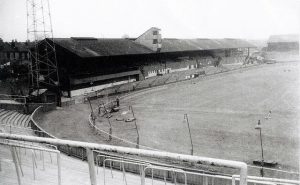 Rovers finished 11th of 15 in their first season in the Southern League, whilst also recording a club record win when beating Weymouth 15-1 in an FA Cup qualifying round. Five years later they were Southern League champions finishing five points clear of Reading and Southampton.

For the next 30 years Rovers would show no real signs of rising above their third-tier status and indeed they spent most of the time close to the bottom of the 3rd Division (South). 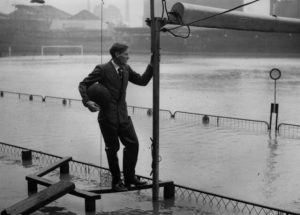 Rovers purchased the Eastville stadium for £2,500 in 1921. In 1939, with the club in perilous financial straits, chairman George Humphreys decided to sell the freehold to the Bristol Greyhound Company, who had been running greyhound racing at the stadium since 1928.

Some improvements were actually made to the stadium not long after the dogs moved in; what became known as the ‘Tote End’ was terraced over with a small covering on the south west corner. Totalisator clocks were added to the back of the terrace and much later, in 1961 when the end was covered these were moved to the roof of the new covering.

Humphreys acted independently when making the big decision to sell however and this caused a number of boardroom rows. At one stage the club tried to back out of the sale but the Greyhound Company would not allow them to. With debts rising to over £20,000 the club realised they really had no option and in 1940 the ground was sold for £12,000 with Rovers remaining as tenants on a 21-year lease. 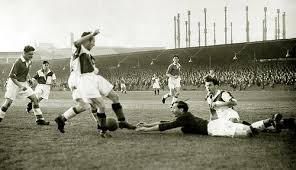 The 1950s finally brought an upturn in fortunes on the playing side for The Gas. The decade started with a fine FA Cup run. Early rounds saw replay wins over non-league Llanelli and Gillingham before they hammered Aldershot 5-1 in the 3rd Round. A win at Luton and then a 3-0 home success over Hull City saw Rovers reach the quarter-finals for the first time in their history. Drawn against the mighty Newcastle United they travelled to St James’s Park and grabbed a surprise goalless draw.

A then-record crowd of 30,724 packed into Eastville for the replay and hopes were raised when Geoff Bradford give Rovers the lead. But unanswered goals by Ernie Taylor, Charlie Crowe and Jackie Milburn give the visitors a 3-1 victory. Newcastle would go on to win the cup that year, beating Blackpool in the final. 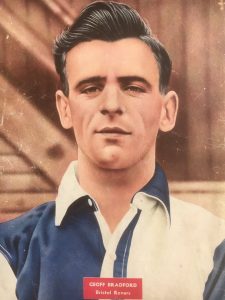 Bradford was a true hometown hero. Born in Bristol he was discovered playing for local team Sandwell and made his debut in 1949 aged 22. He would go on to play over 450 first-team games for the club scoring almost 250 goals. He played in every outfield position and, in 1961, turned down the chance to join Bill Shankly’s Liverpool. He was capped for his country in 1955, scoring in the 5-1 win over Denmark and remains the only player to play for England while on the books at Rovers. He retired in 1964 after 15 years at the club and continued to live in Bristol, working as a petrol tanker driver. He passed away in 1994 at the age of 67.

In 1952-53 Rovers finally made the jump to Division Two. With Bert Tann, who took charge in 1950 and would remain until 1968, at the helm, Bradford’s 33 goals led them to the Third Division (South) title, two points clear of Millwall. For the rest of the decade they maintained a mid-table position in the second tier and towards the end of it, made a second serious Cup run.

Being in Division 2 meant that Rovers didn’t enter the 1957-58 FA Cup until the 3rd Round. There they comfortably saw off Mansfield Town 5-0. In the 4th Round they were drawn to play Burnley, widely regarded as one of the best teams in the country. A 2-2 draw at home looked to have scuppered their chances but they produced a great performance to win the replay 3-2 at Turf Moor.

In the last 16 Rovers were drawn to play local rivals Bristol City, also then in Division 2. 40,000 packed Ashton Gate and they saw a thriller with Rovers prevailing 4-3. So it was a second trip to the quarter-finals, and a second disappointment, this time with 3-1 defeat to Fulham at Craven Cottage. 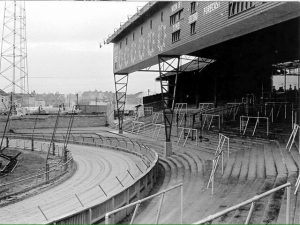 The change of decade again brought a change in fortune for Rovers but this time in the wrong direction. Things started off on a good note with a new attendance record set in 1960 when 38,472 filled Eastville for the FA Cup 4th round clash with Preston. The stadium also saw a rare upgrade in 1961 when a roof and new terracing were installed at the Tote End. 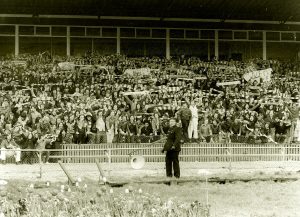 On the pitch, the team were relegated back down to the 3rd Division in 1961-62 and would remain there for the rest of the decade without threatening to get involved in the promotion race. But the 1969-70 season saw a third-place finish which hinted that better times might be ahead. 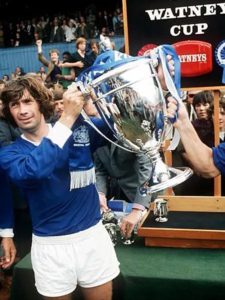 It took five years but the good times did indeed return to Eastville. In 1972 Don Megson took over as manager having played for the club for two years. In the pre-season Watney Cup, Rovers overcame Wolves and Burnley without conceding a goal to set up a final at Eastville against top-flight Sheffield United. In front of 18,000 at Eastville the game finished goalless and went to penalties. It took 18 spot kicks to separate the teams with Dick Shepherd saving Ted Hemsley’s effort to give Rovers the (huge) Cup. 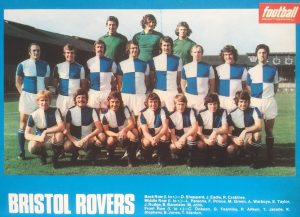 The Cup win was just the start. Up front Megson teamed Bruce Bannister with new arrival Alan Warboys and the pair, who became known as ‘Smash and Grab’, fired home the goals that propelled Rovers back into the Second Division. This time they stayed at the higher level for seven years before relegation again reared its ugly head.

Rovers would make it to the second tier again in the 1990s but by then their time at Eastville was over.

In 1980 a fire destroyed the South Stand and following this attendances started to fall. This, along with continued rent increases made it extremely difficult for the club to make ends meet. In 1986 a near-bankrupt Rovers moved to Twerton Park in Bath and they would spend ten years playing outside Bristol.

Eastville lasted as a greyhound stadium until finally closing its doors in 1997 after being sold for development. It is now an Ikea superstore.

Rovers, meanwhile are now back in Bristol, playing at the Memorial Stadium, former home of Bristol Rugby club. There are no gasworks nearby and, presumably, no pirates!