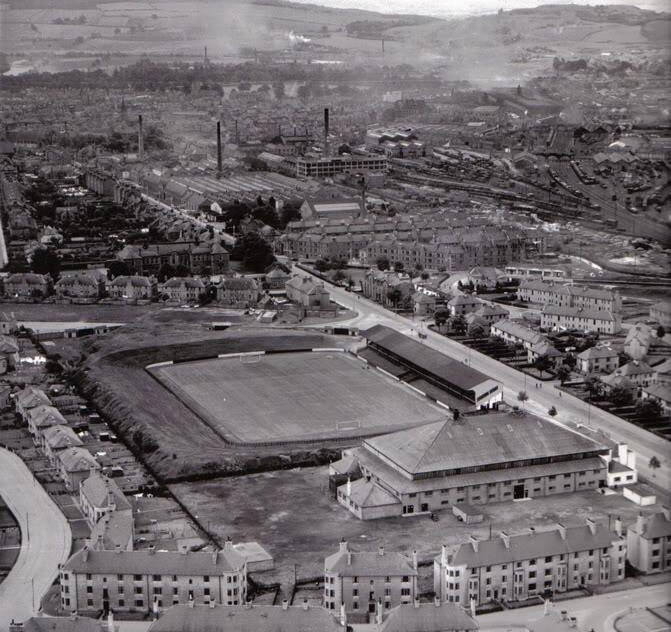 AS was the case with a number of other clubs, St Johnstone FC came about when members of a cricket club decided they needed something to keep them occupied in the winter.

Perth was ‘cricket-crazy’ at the time and it has been reported that there were over 100 clubs in the city. This may have led to football being slower to take hold than it had in other areas.

The first club in the city was called Pullars Rangers who started up in 1884 and St Johnstone came along soon after when cricket team member John Colburn suggested they try the winter game.

The club initially had 20 members each of whom contributed £1 to the coffers when it was formed in 1885 (it has been proved that ‘85 was the year of formation even though many records and even the club badge had indicated 1884). They leased land close to Perth Prison from Sir Robert Moncrieffe and gave it the name ‘The Recreation Grounds’. Throughout the early years the ground had only a small grandstand (Second-hand, it had been bought from the local North Inch racecourse) and a pavilion.

The name of the club comes from the original name of Perth (‘St John’s Toun’ relating to the church of St John the Baptist).

St Johnstone’s first-ever game was played on 7 March 1885 and resulted on a 1-0 win over Caledonian Railway. This was played on land known as South Inch, where football is still played, but the club knew they would need better facilities to progress. This was when they leased Moncrieff’s land, previously known as Craigie Haugh. 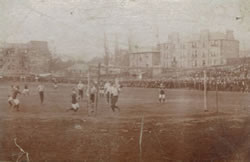 The first game at the Recreation Grounds was played in August 1885 and St Johnstone didn’t even play! The match was between ‘Our Boys’ from Dundee and the Glasgow giants of Queen’s Park and was won 6-0 by the Glaswegians.

St Johnstone did start playing there later that year with their first match coming against the wonderfully-named Our Boys Old Boys and resulting in a 6-2 defeat for the home team. In 1886-87 they entered the Scottish Cup, falling at the first hurdle to another Perth team, Erin Rovers with whom they drew 3-3 at home before losing the replay 7-1.

The club entered the Scottish Cup sporadically during their early years and it would be some time before they progressed past the 2nd Round.

The Recreation – under water

The Recreation Ground was prone to serious flooding (the local Fire Brigade was called in to help with mopping-up duties before a big Scottish Cup tie with Rangers in 1909) and the pitch often became waterlogged during matches as water backed up. The local newspaper said that either the pitch needed raising five feet or a new ground needed to be found.

League Football was a relatively long time coming to St Johnstone. After the 1910-11 season Port Glasgow Athletic, who had finished one place off the bottom in the Second Division declined to apply for re-election. St Johnstone took their place and their first game at the Recreation Grounds resulted in a 4-1 win over Arthurlie. It was a good first campaign with the team winning 10 of their 22 games and finishing a highly respectable 5th in the table.

Either side of the 1st World War the team settled into a relatively comfortable existence both in the Scottish League and at the Recreation Grounds. But in 1923-24 things took a big leap forward, on both fronts.

In the Scottish League St Johnstone battled with Cowdenbeath for the title, eventually seeing off the Fifers by a single point to take the crown and with it, promotion to the First Division.

Meanwhile, the club came to the conclusion that they needed to upgrade their home in order to keep moving forward. At a meeting in February 1924, the shareholders voiced the opinion that their current home was dilapidated and had poor access. They concluded that it would prove either impossible or extremely expensive to redevelop ‘The Recs’ and that the club should move to a new site, at Muirton Park in South Muirton where the land would cost £294 . The club closed the Recreation Ground with a 4-2 win over Kilmarnock, having set an attendance record of around 12,000 against Clydebank at the end of the previous season.

The 1923-24 season had seen the introduction into the team of Jimmy Fleming, a player who would have a major impact on the promotion team, and who would go on to have great success elsewhere and represent his country.

Fleming was signed from junior team Shettleston with the club splashing out £20 on his signing-on fee. He made an immediate impact on the team either on the left-wing or in his favoured centre-forward position.

His skills quickly attracted the bigger clubs in Scotland and two years after joining the club he moved to Rangers having netted 50 times in 77 games for Saints.

Whilst at Ibrox he won three Scottish caps, scoring three goals and he still holds the individual record for most goals in a match for the Gers after finding the net nine times in a 14-2 Scottish Cup win over Blairgowie

The Muirton Park ground opened on Christmas Day 1924 with a league game against Queen’s Park which Saints, now with former Burnley player David Taylor as manager, won 1-0 before an estimated crowd of 12,000. 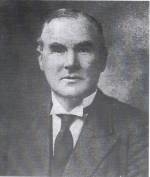 The man behind the move, and behind all of the progress St Johnstone made in their early years was former player Robert Campbell.

Campbell, a solicitor was key in the club becoming professional and becoming a limited company, helped choose the team until bringing in first Taylor and later Tommy Muirhead  and would remain involved with the club until passing away in 1938, aged 66. He also became President of the Scottish Football Association

The new ground had been chosen from a number of possible sites. Easy access and a regular tram service stopping nearby, along with good soil and ‘ample space to enter and exit’ were among the chief reasons the new venue was chosen, even though at the time it was on the outskirts of town. The club spent £3,207 on preparation at Muirton Park and £9,574 on construction of a grandstand.

The grandstand, running along the Dunkeld Road side of the pitch, was a steel and concrete construction with wooden seats and flooring. The other three sides of the ground were terracing.

Manager Taylor spent seven seasons at the helm of the club. For the first five of them he (mostly) comfortably kept them in the top flight. The sixth however, was disappointing with the team finishing the 1929-30 campaign bottom of the 20-team table and relegated. 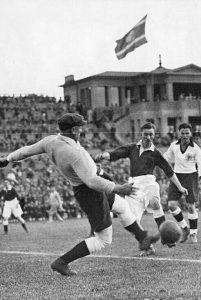 Willie Imrie in action for Scotland against Germany

During Taylor’s reign St Johnstone had their first international representatives when goalkeeper Sandy McLaren and half-back Willie Imrie were picked to represent Scotland against Norway in Bergen in 1929. McLaren was just 18 years and 152 days old, the Scots’ youngest-ever goalkeeper, when making his debut as his team won 7-3.

McLaren would go on to play five times for his country and was sold by Saints to Leicester City in 1933.

Imrie was described as the Scots’ best player in the Norway match and, on the same tour he would claim the equaliser in a 1-1 draw with Germany.

The following season Imrie played for Saints at the start of the season but he was then sold to Blackburn Rovers for £4,300 before later going on to play for Newcastle United, Swansea Town and Swindon Town.

At the outbreak of World War Two, Imrie joined the R.A.F and whilst serving he contracted a fatal illness, passing away in 1944 aged just 36.

Taylor also brought Harry Ferguson from Alva Albion Rangers. A left-half or inside-left, he was a stalwart for the club and would spend 12 years at Muirton Park, turning down a £1,600 move to Blackburn Rovers along the way.

Ferguson was granted a testimonial in September 1935 when Manchester City, who had Matt Busby in their line-up, visited Muirton Park. He scored a hat-trick in a 4-3 defeat but netted a fine sum of £120 for his efforts.

In Saints’ first season back in the second flight (1930-31) they finished 5th, and well off the pace.

In 1931-32 Taylor was replaced at the helm by former Rangers star and Scotland international Tommy Muirhead and the new man had immediate success leading his team to the runners-up spot behind East Stirling and earning a return to the First Division.

Two years after regaining the top flight place Saints had their first glimpse of a trophy, reaching the last four of the Scottish Cup before being edged out 1-0 by eventual winners Rangers in front of over 60,000 fans at Hampden Park.

One of the key members of the team Muirhead built at Muirton Park was Bobby Davidson.

Bought from St Bernard’s for £200 with a well-placed 25% sell-on fee, Davidson stood only 5ft 5in tall, or ‘liliputian’ as a local reporter called him at the time of signing.

In 1934 Saints played Arsenal in a friendly and he impressed the opponents. The Londoners had already been keeping an eye on him since his St Bernard’s days when Herbert Chapman was in charge at Highbury, and did so again when representing the Scottish League in a match against the Irish League soon after.

On 1 February 1935, Chapman’s successor as Arsenal manager George Allison had a bid of £4,000 accepted for the inside-right (well done to St Bernard’s for getting that sell-on clause!) and Davidson moved to London where he made 63 appearances, scoring 15 times, including on his debut, before leaving for Coventry.

Saints comfortably survived in the top flight in the remaining years until the outbreak of World War Two, and suffered no real drop-off when losing boss Muirhead to Preston North End in 1936 (he would spend just a year there before turning to journalism), with his replacement David Rutherford maintaining their place.

During the pre-war years Muirton Park was put to good use with hockey internationals, Highland Games, donkey races and re-enactments of the Battle of the Clans all taking place, but when hostilities commenced the club effectively closed down, giving up tenancy of the ground in a cost-saving exercise.

As WW2 went on, the ground was used as a training area for the home guard and for storage although football wasn’t completely forgotten with an Army international between Poland and Czechoslovakia also taking place.

The club were penalised for their closure during the war years as when full organised football resumed for the 1946-47 season they found themselves placed in the 2nd Division. In 1947-48 Jimmy Crapnell took charge for six largely forgettable seasons then Johnny Pattillo took over, initially as player-manager, for five more.

It took the arrival of former international goalkeeper Bobby Brown to bring about an upturn in the team’s fortunes and we’ll get there in Part Two!