WHEN no less an authority than Herbert Chapman says of you: “I shall always think he was the finest footballer I’ve ever seen” you need to sit up and take notice. So just who was Ernest  ‘Nudger’ Needham?

Ernest Needham was born in Whittington Moor, North Derbyshire on 21 January 1873 one of six children to George and Mary. Whilst following in his father’s footsteps as a coalminer, he started his footballing life with junior local teams Waverley, Staveley Wanderers before moving on to senior team Staveley Town. He built a reputation as a winger of some promise, appearing for the Sheffield Association against Staffordshire and in Glasgow as a 16-year-old before later switching to the half back position where he would spend the rest of his career. During his career he appeared in every position, although he only took on the goalkeeping role for 10 minutes while the regular ‘keeper recovered from injury.

“I took to football in my schooldays and played with Staveley Wanderers whom I captained,” he later recounted. “Until chosen to play with the senior club of the village, when 16 years of age.”

Playing alongside his brother Wright Needham, Ernest set up the first goal for Town in a 2-0 win over Sheffield United in a Midland League match in 1891 and impressed the Yorkshire club so much that they signed him soon after, just past his 28th birthday. His debut came on 5 September of the same year in a friendly at Woolwich Arsenal where he replaced fellow new signing Harry Hammond who had been injured a few days before at Millwall. It was a most satisfactory start as United recorded a comfortable 2-0 success. Hammond were preferred to him in the early part of the season but Needham gradually forced his way into the team playing 13 times as United finished 3rd in the Northern League whilst also appearing in a number of friendlies against league teams. At this time he was still mostly playing at outside-right including one memorable match against The Wednesday at Bramall Lane which United won 5-1 in front of 30,000 fans.

The 1892-93 season saw United’s entry into the Football League although club officials were said to be disappointed that they were placed in the second tier whilst The Wednesday were admitted directly into the 1st Division. Needham became a regular in the team, appearing in 20 of the 22 matches as they finished runners-up and earned a place in a ‘test match’ for promotion.

The play-off match was played at Trent Bridge, Nottingham against Accrington who had finished second from bottom in the top flight and United edged past their rivals by a single goal to earn promotion.

Such was Needham’s outstanding form during the season that he was chosen to play for the Professionals against the Amateurs in an England trial match. He failed to earn a call-up for his country at this time but was chosen to represent the Football League against the Scottish League.

Over the next couple of seasons United, bolstered by the arrival of William Foulke in goal, established themselves in the top flight and Needham’s reputation as a fine reader of the game and passer of the ball grew. Although the opposite of Foulke, being, at 5ft 51/2 inches, small in stature (the renowned journalist and author J.A.H. Catton, also know as ‘Tityrus’ called him ‘The Tiny Titan’), he could more than hold his own with bigger players and won many duels thanks to his excellent timing. 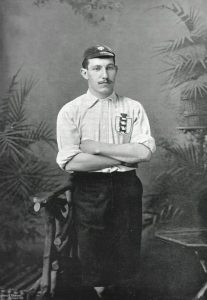 International recognition came when, in April 1894 he won his first cap for England, for the 2-2 draw with Scotland at Celtic Park in front of an estimated 41,000 fans. In his first appearance in a national shirt he was described by ‘The Free Critic’, writing in the Athletic News, as; ‘Prone to rashness’ but, our correspondent went on, ‘He did not disgrace himself by any means’.

Those early years in the top flight were fierce as United sought to establish themselves. And it wasn’t just tough opposition that the Blades had to battle against. Needham recalls in his book ‘Association Football’ published in 1901 one particular game against Aston Villa at Perry Barr where the weather was so bad that; “I left the field half an hour before the finish of time and by doing so probably saved my life.

“Men on both sides succumbed and were carried away to hot baths and stimulants.

“Several of the Villains did what playing they could in great coats and one used an umbrella.”

In 1894-95 Needham took over the captaincy of the Blades from Billy Hendry, and had his wages increased to £3 a week as the team further established themselves in the 1st Division, finishing 6th.

In January 1895 Needham became ill with ‘inflammation of the bowels’ which, his doctor said, was probably a result of his harrowing experience at Perry Barr the previous year. However, after a period of bed rest he recovered and returned to the team, playing so well that he earned a second England cap in the 3-0 win over Scotland at Goodison Park where the crowd of 42,500 was a new world-record attendance.

United suffered a dip in form in the 1895-96 season, finishing just six points clear of relegation but they bounced back in the following year to finish runners-up to double winners Aston Villa and then went one better in ‘97-‘98, claiming the title by a healthy five point margin from Sunderland.

The crucial win came three weeks before the end of the campaign when the Blades overcame their closest rivals 1-0. But the skipper missed that match as he was busy winning his seventh England cap in a 2-1 victory over Scotland. He would go on to play 16 times for his country, scoring three times including one in the 6-0 win over Wales at St James’s Park in 1901, the only time he skippered the side.

With ten appearances for the Football League to go alongside those England caps the only gap on Needham’s resume was an FA Cup winners medal and he was to remedy that not once but twice.

The 1898-99 season saw a disappointing defence of their championship with the team finishing just one place above the relegation zone. The Cup however, was a different proposition. Wins over  Burnley, Preston North End, Nottingham Forest and Liverpool were achieved but not without degrees of difficulty. 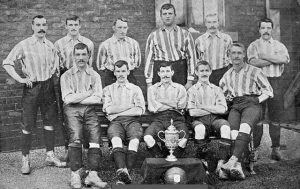 The first two round were only navigated after replays and the semi-final with Liverpool resulted in four meetings. A 2-2 draw at the City Ground, Nottingham was followed by a thrilling 4-4 encounter at Burnden Park. The third match took place at Fallowfield, home of the Manchester Athletic Club nobody could have expected a crowd of over 30,000 on a Monday afternoon.

Liverpool – at the time chasing the double – were leading 1-0 when fans burst through the fences and spilled over onto the pitch. The match was delayed for an hour then Liverpool came back out to resume. But United, reduced by injuries to ‘nine men and a cripple’ according to one report, were more than happy when the referee, citing worsening light, called things off for the day. Some fans remained after full-time to hurl abuse at ‘Fatty’ Foulke who, during the play that was possible had an altercation with Scottish forward George Allen during which the Liverpool man was ‘lifted outwards, upwards and then dropped downwards – heavily’.

The fourth encounter took place at the Baseball Ground. Another fierce battle ensued with Needham reportedly ‘in a class by himself and holding a depleted Blades together. The pair were goalless until eight minutes from time when Fred Priest crashed the ball goalwards and Billy Beer turned it home to send United through to the Crystal Palace.

In the final United faced a Derby County team who finished the league campaign seven places above their rivals. But Derby proved no match for Needham’s men who ran out 4-1 winners.

Two years later they were in the final again, this time losing in a replay to Spurs, and in 1902 they reached their third final in four years with Needham collecting the trophy for a second time, this time after a replay win over Southampton. United led early but were pegged back. They retook the lead when Nudger’s shot was pushed out to youngster William Barnes who rifled home. Thereafter Saints peppered the United goal but Fatty Foulke proved impossible to beat and Needham collected the trophy for the second time.

Needham was given a benefit match in 1907 and carried on playing until 1910 when, having just celebrated his 37th birthday he hung up his boots after a match at Bolton Wanderers. He made a total of 554 starts for United, his only club.

‘Nudger’ also appeared regularly in first-class cricket for Derbyshire, scoring seven centuries including two in one match against Essex after which the bat he used was mounted in silver. When asked which of the two sports he preferred, he replied; “I like football the better to play, cricket to watch.”

The man known as the ‘Prince of Half-Backs’ passed away in 1936 at 63 years of age following an operation for an ‘internal complaint’ brought on after an attack of bronchitis and pleurisy. After retiring from playing he was a fitter at Staveley Works whilst scouting for United at weekends and indeed was still attending matches a few weeks before he died.

Ernest Needham still holds the record as Sheffield United’s most-capped England player (despite playing at a time when the only internationals were against the other home countries) and led the team to their only title success as well as to two of the four FA Cup wins.

As such Nudger deserves to be remembered as the greatest-ever Blade.