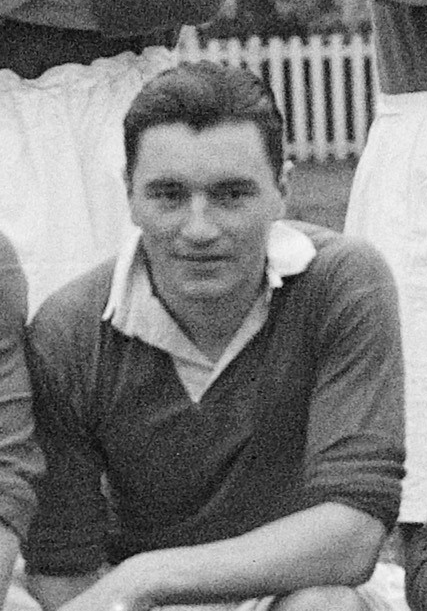 England’s Home International Championship match with Scotland at Wembley on 2 April 1955 was memorable for a number of reasons. It produced a 7-2 win for the home team, saw Wolves forward Dennis Wilshaw bag four goals bringing his total to seven in just four internationals, featured the second goal in two internationals for Manchester City’s Don Revie and saw the debut of the player many claim was the country’s finest-ever – Duncan Edwards, then aged just 18 and-a-half. 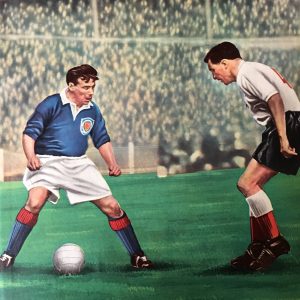 England took the lead inside 60 seconds through Wilshaw and after just six minutes Nat Lofthouse doubled the advantage. Lawrie Reilly got one back for the Scots but Revie soon restored the two-goal advantage before Lofthouse made the score 4-1 with just 27 minutes played.

In the second half 40-year-old Stanley Matthews continued to run the Scots defence ragged and helped Wilshaw to a 13 minute hat-trick to go along with the one he’d scored earlier. Tommy Docherty struck with a late 25-yard free-kick to provide small consolation for the glum Scots in the crowd.

Two other players won their first cap that day. One was Jimmy Meadows, a clubmate of Revie’s who would never represent his country again. The other was Ken Armstrong who also, somewhat surprisingly, was making his only ever start for England.

Armstrong, who had Chelsea teammate Frank Blunstone in the line-up for company that day, did in fact go on to make more international appearances but these would come a few years later and on the other side of the world.

Armstrong was born in Yorkshire in 1924 and started senior football with local team Bradford Rovers whom he played for on Saturdays after spending the working week as a bank clerk. He joined the RAF during the 2nd World War and his connection with Chelsea came when stationed on the Isle of Man. There he met Llew Ashcroft, a Welshman who played for Flint Town and had guested for the Blues. Ashcroft introduced him to assistant-manager Joe Shaw and he was offered the chance to turn out for the club.

His first appearance for Chelsea came in September 1945 while he was still serving and it wasn’t a particularly comfortable debut as the reserve team he was playing for lost 5-0 to West Ham. However he continued to play until being posted to Germany. Demobbed in December 1946 he signed professional forms soon after.

Armstrong made his full team debut at the start of the 1947-48 season at Blackpool in Stanley Matthews’ first match for the home team. With Tommy Lawton injured, and also angling after a move away from Stamford Bridge, the Blues, with Alex Machin standing in, were toothless up front. Two goals from Stan Mortensen and an own-goal from John Harris saw the home team to a comfortable 3-0 win.

The second start came in the season’s  home opener, against Blackburn Rovers. With Lawton still out inside-forward Tommy Walker was given a chance to lead the attack. At half-time, with neither team having looked dangerous manager Billy Birrell swapped things around and gave Armstrong a try at centre-forward. The move worked with the makeshift popping up with the only goal five minutes from time.

Lawton returned to the side for the next match and got the only goal of the game against Derby County, allowing Armstrong to revert to his wing-half role.

The Blues were without Lawton for the matches against Everton in September and Middlesbrough  in October as he was away on international duty. On both occasions Armstrong took his place and each time he scored twice. This led to him being given the number nine shirt on a regular basis after the England centre-forward was sold to Notts County. 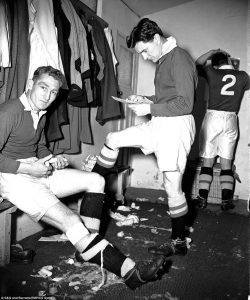 Skipper Roy Bentley with Ken in the dressing room

He had some successes in the role, a home hat-trick against Stoke being a particular highlight, but was only ever a stop gap. Roy Bentley arrived from Newcastle in January 1948 and after he had played a handful of games at inside-forward was switched the lead the attack with Armstrong reverting to his favoured wing-half berth where he spent the rest of the season, finishing it as an ever-present.  He would return to a more forward role later in his time with the club and provide some crucial strikes. Despite this he was always more comfortable at right half and it here where his strong tackling and tenacious playing style were best employed

At around this time the Blues were regularly living up to their nickname of ‘The Old Inexplicables’ of the game. The occasional sparkling performance was more often than not followed by three or four bad ones and they mostly languished in the lower reaches of the 1st Division.

In 1950-51 the club were in dire straits and looked certainties for relegation with four matches to go. But ‘Inexplicable Chelsea’ did what they do, winning all four with Armstrong, switched to inside-left, scoring the winner against Wolves and notching both in a victory at Fulham. The Blues survived, just.

Armstrong continued to be a model of consistency in midfield and he started edging towards international recognition. As Ted Drake took over from Billy Birrell as manager and Chelsea started to climb the table he became a key member of the team. 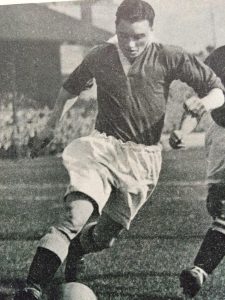 And he was tough too; two broken ribs failed to keep him on the sidelines during the 1953-54 season and he was chosen, and made skipper, for England’s ‘B’ international clashes with Scotland, West Germany and Yugoslavia in 1954.

In the summer of 1954 Armstrong, having been a reserve for four full internationals was chosen as a non-travelling reserve for England’s World Cup bid in Switzerland but he never got the call with the team knocked out at the group stage.

When the 1954-55 season began Armstrong was again overlooked by the international selectors for the first three matches. After playing for the Football League against the Scottish League at Hampden Park he was initially left out again for the England team that faced Scotland at Wembley but got the call when Len Phillips of Portsmouth was injured. 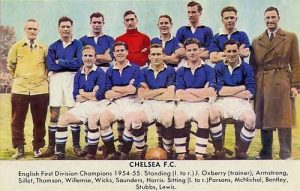 Armstrong was, of course, one of the key members of Chelsea’s 1954-55 title-winning team playing in 39 of the 42 matches. The week before his international bow he had made his 300th league appearance for the Blues in a 2-1 win over Sunderland having already recorded the same number in all competitions during the previous season’s home defeat to Newcastle.

In the same year as he win his first national team start and the title, wife Ann gave birth to the couple’s first daughter after three sons causing Armstrong to say: “A baby girl, a Championship medal and a England cap – all in one season. I couldn’t have hoped for more”. 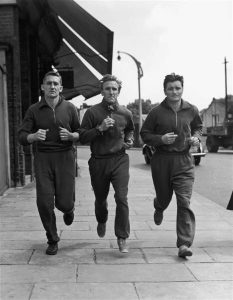 Roy Bentley, Eric Parsons and Ken on a training run

A year later he would become the club’s new record appearance-maker in 1956 when making his 352nd league start beating the record previously held by George Smith who played for the club between 1921 and 1932. Ten more after that took him to 362 in the league and 402 in all competitions for the club, an amount that now sees him way down in 12th on the all-time list with Ron Harris coming close to have doubled the amount.

In October 1956 Armstrong brought a different kind of honour to the club when, playing off a handicap of seven he won the Professional Footballers Gold Championship at Bristol with a gross score of 75.

Explaining his decision Armstrong said: “Football is a young man’s game. At the moment I’m at the top and I’d like to finish at the top.

“Initially I had ideas about becoming a manager. But a manager’s life is a worrying life and not ideal for a man with a young family”. 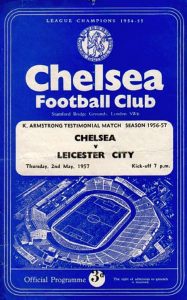 The club staged a testimonial for their long-serving player and a crowd of 14,000 were on hand to see newly-promoted Leicester City beaten 2-1 in May 1957 with Peter Sillett and Peter Brabrook getting the goals. That match is also particularly memorable as a certain youngster named Jimmy Greaves made his first-team bow, winning the penalty for the first goal and playing a part in the second after his shot was blocked. 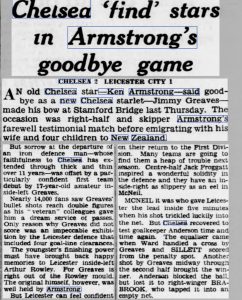 So after more than 11 years at Stamford Bridge Armstrong and his family set off for the other side of the world settling in Gisborne in the North East of New Zealand and taking a job as an insurance salesman.

But he didn’t leave football behind. Ken played for a number of teams in his new home, managed Mount Wellington to two national titles and was eventually named as player-manager of the national team, carrying on managing when he finally hung up his boots in 1962. He played nine matches for the Kiwis, scoring three times and is widely credited with helping to grow the sport in the country

Ken Armstrong passed away in 1984 aged 60 and his ashes were returned to England and scattered over the Stamford Bridge pitch. In 1991 he was posthumously inducted into the New Zealand Soccer Media Association Hall of Fame

There is no doubt that Ken Armstrong was a true Chelsea great and that he would be an early inducted into any Blues’ Hall of Fame. That he should have won more international recognition is without a doubt – even Walter Winterbottom, England’s manager at the time – said he would have picked him more often and that he urged the selection committee to do so. And football writer Maurice Smith of The People said: “If England need a 90-minute trier, a great battler and a first-class pattern maker of openings – Ken Armstrong’s the man”. Chelsea certainly needed him and, in good times and bad, he never let them down.