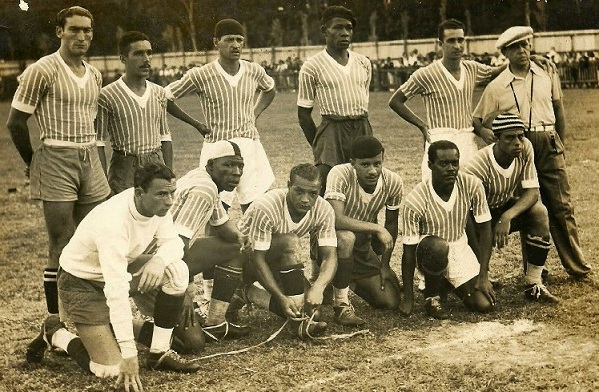 Before Neymar, before Ronaldo, Rivaldo and Ronaldinho, before Pele, Jairzinho. Rivellino and Carlos Alberto. Even before Vava and Garrincha, there was Leônidas, Brazil’s first football superstar.

Leônidas da Silva was born in Rio de Janeiro in 1913 and from the start of his career at Sao Cristóvão he quickly proved himself to be the outstanding player in South America. Successes with Peñarol in Uruguay and in his own country with Botafogo, Vasco Da Gama and Flamengo meant that his reputation was thoroughly deserved.

Whilst domestic success and that spell in Uruguay  made him a superstar on his own continent, ‘The Black Diamond’ really came to the attention of the football world at the 1938 World Cup. 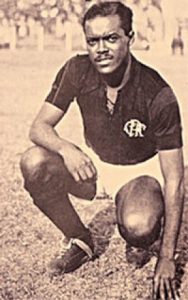 He had made his debut at Football’s biggest tournament four years earlier, scoring Brazil’s goal in their only game, a 3-1 loss to Spain. With the straight knockout format in operation for that tournament it was one and done for the Brazilians in Italy.

So it was to France four years later and the tournament that really carved his name in the history books, both on and off the pitch – and it was a tournament Brazil really should have won.

Unlike the 1934 staging where they had played a number of warm-up matches in Spain and Portugal, the ‘Selecao’ came straight to the 1938 World Cup with no match preparation. In fact they hadn’t played together as a team since February 1937 when they lost the final of the South American Championship to Argentina.

The Brazilians set up at their base in Niederbronn in the forests of Alsace, training privately and only appearing in Paris on the eve of the tournament. Then it was off to Strasbourg for the opener, and what a match that proved to be.

Brazil line-up before the first round match against Poland

In the first round of the 16-team straight knockout tournament Brazil were drawn against Poland. Almost immediately after kick-off Leônidas, wearing the pale blue change shirt of Brazil as their regular white kit clashed with the opponents. ran at the Polish defence. And ran, and ran. He split the Poles apart and, when it looked easier to score, passed to Perácio who blazed the ball over the bar. Seconds later he took no chances, rifling a shot from 25 yards that Polish ‘keeper Madejski never even saw.

By half-time Brazil led 3-1 and Leônidas had put in a stunning 45 minutes of individual brilliance, creating the second and third for teammates. But Poland, while they had no superstar, had lots of resilience and an excellent striker of their own called Ernst Willimowski. The Ruch Chorzow man scored a hat trick in the second half including an 89th minute equaliser after Brazil had re-taken the lead.

So, after 90 minutes the game was all-square at 4-4. Then Leônidas took over. He added two goals in the extra period which meant that despite Willimowski getting a fourth, and his team’s fifth, Brazil ran out 6-5 winners and football’s new global superstar was carried off the pitch on the shoulders of fans. 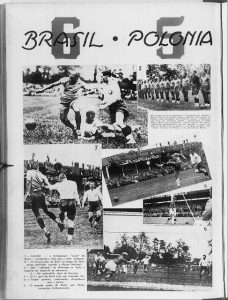 With a week off before their 2nd round match it was time for Brazil, and their star man, to enjoy the best Paris had to offer. This led him to – where else? The Folies Bergere. 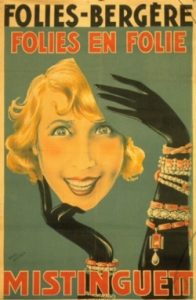 So, he visited the sparkling Parisian nightspot and, unsurprisingly given his new-found status, was invited backstage. Wandering among the nudes and semi-nudes populating the area with barely a glance, he soon found himself in the dressing room of Mistinguett, legendary, ageless beauty of the Folies.

Mistinguett as she often did, was holding court after her performance, partially dressed and doted on by some of the many followers who hung on her every word. Like everyone else when first seeing the French beauty, Leônidas was momentarily stunned.

Sighting her guest of honour, Mistinguett stretched out an arm towards him. 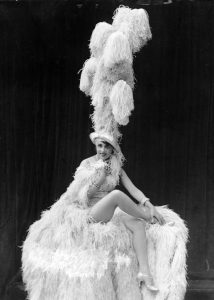 As heads turned towards him, the Brazilian flashed his winning smile and, suddenly, it was he who was the centre of attention. Mistinguett disappeared momentarily behind a dressing screen returning shortly after wearing even less than before. She took Leonidas by the arm and announced, “Darling, of course you can take me to dinner.”

Leônidas hadn’t even asked, but wasn’t about to turn down the chance. So together, they walked off into the night.

Suddenly, Leônidas had a brand new fan club. Mistinguett and the girls of Folie Bergere attended every Brazil match in the remainder of the tournament, cheering their new hero and his teammates on.

In the second round Brazil were drawn to play Czechoslovakia, runners-up to Italy in the 1934 Final, in Bordeaux. It was a bruising encounter. Brazil finished with nine men and the Czechs with ten after three sendings-off. The match finished 1-1 after extra-time, Leônidas (of course) scoring the goal.

48 hours later the teams met again in a replay and Leônidas led his team back from a goal behind to win 2-1, scoring one and making the other.

Brazil were now firm favourites to win the tournament but, it seems, the selectors started to believe their own publicity – and that was to prove costly.

The semi-final against holders Italy took place in Marseille just two days after the replay win over the Czechs. The Brazilians, explaining that they wanted their star man fit for the final, amazingly left him out of the line-up. So, with Leônidas watching helplessly from the stands they lost 2-1 to the eventual winners.

Leaving out undoubtedly your best player for a game which would see you make the World Cup Final is astonishing and has to be seen as one of the greatest acts of arrogance in World football history. A few days later Leônidas would underline the folly of that decision. 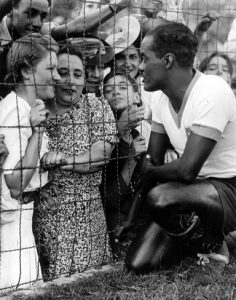 There was time for Leônidas to add a last exclamation point. The playoff for 3rd and 4th place between Brazil and Sweden took place in Paris. In his first appearance in the French capital and made captain for the day, he scored twice as his team turned an early 2-0 deficit into a 4-2 win.

Leônidas finished as the tournament top scorer with seven goals in only four games and the day after the 3rd/4th match thousands came to the airport to wave him and his team-mates goodbye.

Little did they or he know that, with World War Two rapidly approaching this was to be the great man’s last appearance on the international stage. 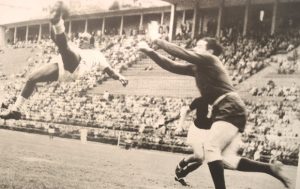 One of his trademark bicycle kicks

Leônidas continued to play in Brazil, finally retiring in 1950 having won nine championships for five different clubs and scored a phenomenal 516 goals in 574 games. He had – and still has – a chocolate bar named after him.

Having spent many years as much-loved radio analyser Leônidas passed away in 2004 aged 90. He will be remembered as one of football’s greatest-ever strikers, as a personality and a ladies-man, and also as a man who should have led his team to their first taste of World Cup glory.