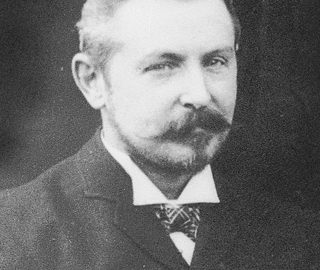 Born in 1853 in Glasgow Ramsay had moved down to Birmingham as a clerical worker in a brass foundry when, in 1874, he saw some a group of men enjoying what he thought was a casual kickabout at Aston Hall and asked if he could join in. The other players marvelled at his close control and short passing, indicative of the Scottish style until then unheard of in English football.

Villa quickly built on their Scottish influence. With the legendary William McGregor, the man behind the formation of the Football League as their president, and Scotland’s ‘lion rampant’ on their shirts, the arrival of Ramsay enhanced the north of the border feel of the club, and they would carry on exploiting this by being among the first to regularly bring in top Scottish players.

Ramsay joined the club and was quickly promoted to skipper. He would remain at Villa Park for an incredible 52 years.

Ramsay would later describe the Villa players’ approach to football prior to his joining as ‘A dash at the man and a kick at the ball’ but his own style of play soon began to influence teammates who learned from him and adapted to it. 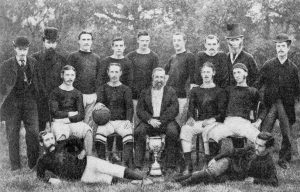 As captain Ramsay led the team to their first major trophy with a win over Saltley College in the 1880 Birmingham Senior Cup Final. They would go on to win the trophy four times in the next five years, being beaten finalists in the one year they didn’t take the trophy.

But in 1882 Ramsay, aged just 29, suffered a serious injury which forced him to hang up his boots. As with many who went on to reach the top as managers the premature end to his career turned out to be a blessing in disguise as, within two years he was put in charge of the team.

The move came about after Villa had switched from amateur to professional status in 1885 and placed an advertisement in local newspapers for someone to fill the role of ‘Manager’. Having already taken in the role of secretary, Ramsay applied and was appointed.

Before then he had already been instrumental in the club moving their home ground to the Wellington Road ground in Perry Barr. The new ground was fenced in which allowed the club to charge admission fees.

Ramsay was appointed in 1886 and his new job meant running the club in all aspects from choosing where matches were played, organising fixtures, recruiting players and picking the team.

Under his stewardship Villa quickly became a leading light in English football. By the time the Football League started in 1888-89 they had already been F.A. Cup holders having won the competition two years before.

Ramsay was the first manager as we might know them today. He had total control over both team selection and tactics and his quick-passing style revolutionised the way the game was played in England. 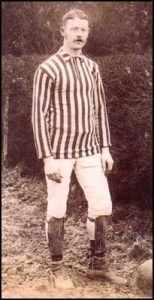 Ramsay had recruited fellow-Scot, Archie Hunter from Ayr Thistle, as the team’s centre-forward and he quickly became the star man. Villa kicked off their 1886-87 cup campaign with a 13-0 win over Wednesbury Old Athletic. Hunter’s arrival was very much influenced by the presence of Ramsey. “Mr Ramsay was a Glasgow man”, the player would recall when explaining his decision to move. “And he had exerted himself very considerably to bring the Villa team into the front rank”. 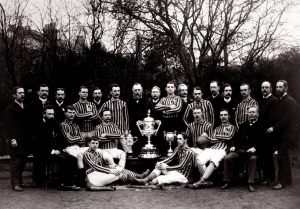 Hunter got one of the goals in the final, although the opposition stopped playing as they felt he was offside, and Dennis Hodgetts scored the other as Villa ran out 2-0 winners in front of 15,500 spectators.

Hunter, nicknamed ‘The Old Warhorse’ had taken over from Ramsay as captain and led the team on the pitch until he suffered a heart attack during an 1890 game against Everton. He never fully recovered and passed away five years later.

Ramsay led the team to another cup final in 1892 but West Brom got their revenge winning 3-0 but it was after this defeat that the team truly entered their golden period. In the seven seasons between 1893-94 and the turn of the century the team won five football league titles and two F.A. Cups. 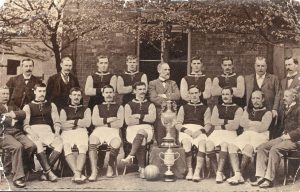 Ramsay’s Villa truly dominated English football, including a double win in 1897, through the period and a number of top-class local players like Jack Devey, Frank Wheldon and Billy Garraty we’re joined by the likes of John Campbell and James Cowan as the Secretary/Manager continually looked to rework his squad to move things forward.

In the middle of this hugely successful period the club moved home, switching to the Aston Lower Grounds next to Aston Park, the ground which later became known as Villa Park. The story goes that Ramsay was the first man to kick a ball at the new ground. 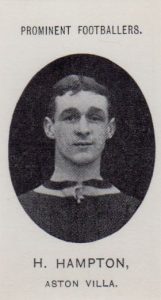 Just as the club had looked to be surpassed by some of the other great powers of the early game, Ramsay made an inspired purchase, paying £120 for the signature of Harry Hampton in 1904. The ‘Wellington Whirlwind’ would spend 16 years with the club and he compiled a record of 215 goals in 341 games as well as grabbing both goals in the 1905 Cup final win over Newcastle United and then playing a leading role as the club captured the trophy again in 1913, overcoming Sunderland in the final.

After football resumed following the Great War, Ramsay set about building yet another great Aston Villa team. Key to this one was Billy Walker who had joined the club in 1914 and who would come to be considered by many as the greatest player in Villa’s history.

Walker would spend a total of 20 years with the club, making more than 500 appearances and scoring almost 250 goals. He also won 18 England caps scoring 9 times and after retiring would manage both Sheffield Wednesday (1935) and Nottingham Forest (1959) to victory in the F.A. Cup final, the second of those coming 39 years after he had won it as a player. 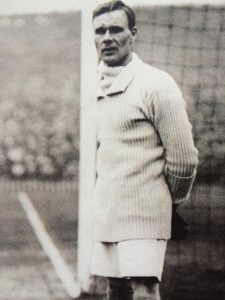 That victory in 1919-20 came with a team full of star players. In goal was Sam Hardy. ‘Safe and Steady Sam’ was the first of a succession of great ‘keepers to have begun their career at Chesterfield and he won 21 caps for England. 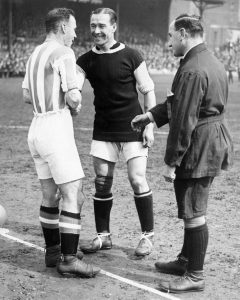 Skippering the side was Andy Ducat. A dual football/cricket international, Ducat had joined the club from Woolwich Arsenal for £1,000 in 1912 and won six caps for his country. Ducat also scored 52 centuries for Surrey and was considered unlucky to be chosen only once for England at the summer game. 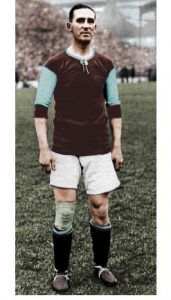 In 1919 Ramsay splashed out £2,850 to Barnsley for centre-half Frank Barson. It was to prove a shrewd investment as Barson, though an often controversial character, played a key role in the cup win and was later sold to Manchester United for £5,000 after he had refused repeated requests by the club to move south from his Yorkshire home.

The cup-winning teammate who saw off Huddersfield Town 1-0 after extra-time, included 10 England internationals and also included Clem Stephenson who would later go on to star for the team Villa vanquished in the final and winning goalscorer Billy Kirton who was signed from Leeds City for £500 and who played just once for his country, scoring in the 1-1 draw with Northern Ireland in 1921.

By the time of the win over Huddersfield, Ramsay was 65 and had been at the helm of the club for 35 years. He continued until 1926 when, at the age of 71 he stepped down and became a honorary advisor and vice-president. He remained involved with the club until his death, at the age of 80, in 1935. The following year, Villa were relegated for the first time.

George Ramsay is remembered on his gravestone as ‘Founder of Aston Villa’ as while that might not strictly be true nobody can be said to have shaped the club more than the Glaswegian.

A total of six First Division titles and six F.A. Cup wins is a huge part of Villa’s history, and so is George Ramsay.