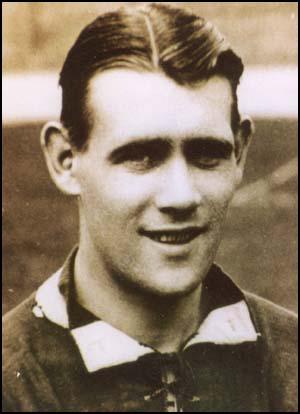 IN 1925 the laws of football changed. And so, soon after, did they way teams played.

Prior to this a player was offside if there were not three players between him and the opposing goal when the ball was last played. The Football Association’s decision to change this to two helped attacks, and in particular quick players who could now take advantage of the extra space available. 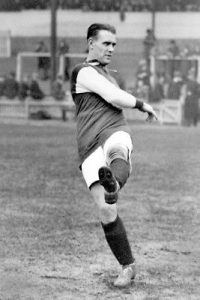 One of the quickest was West Ham’s flying outside-left Jimmy Ruffell.

Ruffell had already made his mark for the Hammers and took part in the team which reached Wembley’s first FA Cup Final.

Born in  Barnsley, Yorkshire in 1900, Ruffell’s family moved down to London when he was a youngster.

After he had played for Fulwell FC, Chadwell Heath United, Manor Park Albion and Wall End United, the Hammers spotted him playing for the Ilford Electricity Board works team and signed him in 1920.

After making his debut against Bury in December 1921, Ruffell quickly became a regular in the team but his searing pace was easily negated by the offside rule which saw defenders step up just before he began runs in behind.

Still he played a major part in the cup run linking up particularly well with prolific goalscorer Vic Watson. At the time the Hammers, with Charlie Paynter in charge of tactics were developing the passing style which would stay with them for a long time. Ruffell later said; “West Ham were a good passing team. Most of the time you had an idea where men were or men would make themselves ready to get the ball from another player. I think we were one of the few clubs to really practice that”. 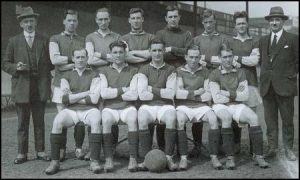 In the final West Ham planned to use their wingers, Ruffell and Dick Richards, to get in behind the Bolton defence and provide the crosses for Watson to feed on. 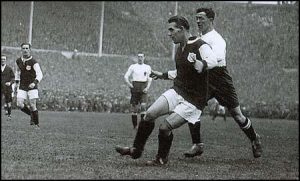 Ruffell in action in the final

As is now well known, the gates were broken down leaving thousands of supporters on the Wembley pitch. The game was played with fans held back along the touch lines by ropes which gave the wingers little room to operate and scuppered the Hammers’ plan, Bolton coasted to a 2-0 win with Ruffell and Richards offering little threat on the flanks.

As Ruffell later explained; “It was a hard game for West Ham to play as the pitch had been churned up by horses and the crowd that had been on the pitch well before the game.

“West Ham made a lot of the wings and you just couldn’t run them because of the crowd that were right up close to the line.

“Bolton had to play on the same field of course, but they didn’t play so wide as West Ham”.

Once the rules changed however so did Ruffell’s effectiveness. Within a season he was picked for England in the 1-0 loss to Scotland at Old Trafford. He would go on to earn six caps for his country and would have won many more were he not playing in the same era as Cliff Bastin and Eric Brook, fellow fine left-wingers. He also benefitted from West Ham’s promotion to the top flight with defenders now more willing to let him take them on, instead of the more ‘heavy-handed’ approach at the lower level. 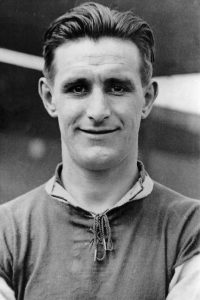 Ruffell made the most of the new law, running at defenders and using a powerful shot to test, and often beat, goalkeepers when he cut inside, and hanging up crosses for Watson when he went to the by-line. He also possessed the ability to bend the ball around ‘keepers from out wide which earned him many of the almost 200 goals he scored for the club. This type of shooting would later be called ‘The Banana Shot’ but back then it was better known at the ‘Ruffell special’.

Combining speed, ball-control and that fearsome shot made Ruffell the best at his position  he was also an all-round sportsman and it was said that he could have been a professional golfer had he chosen that sport instead of football. 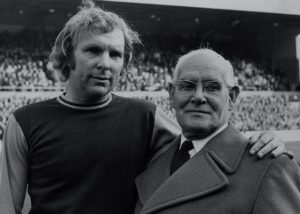 He remained at Upton Park until 1938 when he joined Aldershot having played 548 times for West Ham, an appearance record that stood until passed by Bobby Moore. He found the net 166 times.

He made just a couple of appearances for Aldershot before retiring to work in a brewery and went on to manage pubs in East London and Essex remaining a regular visitor to Upton Park until passing away in 1989 aged 89.

Ruffell was perhaps the original ‘ace winger’, adept at flying past defenders, at crossing the ball accurately and, as his record proves, at finding the net with regularity. As such he was a pioneer and one of the first to take advantage as new rules were brought it to make the game more attractive.