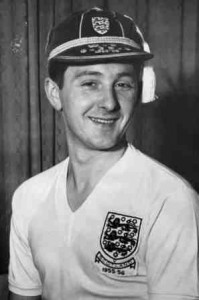 Jeff Hall – A tragic loss with a positive effect

Jeff Hall was an England international footballer and, in the eyes of many, the best right-back in the country during the late 1950s. Then he contracted Polio and tragically lost his life, bringing about a huge upsurge in the number of youngsters being vaccinated against the disease and, in all probability, saving many lives.

Hall was born in Scunthorpe, Lincolnshire but spent his formative years in Wilsden, a small village in Yorkshire where he played for a number of junior teams before joining local club Bradford Park Avenue. He never turned pro at the club and was yet to make a first-team appearance when he was called up for National Service.

While serving with the Royal Electrical and Mechanical Engineers, and playing in an army match, Hall was spotted by Birmingham City chief scout Walter Taylor. “The player I went to watch didn’t shine but I was taken with the play of the right-half” Taylor would later recall. That right-half was Hall so Taylor had a chat with him.   “At first he didn’t think he was good enough and it took me hours to persuade him to sign amateur forms.” Said the scout. 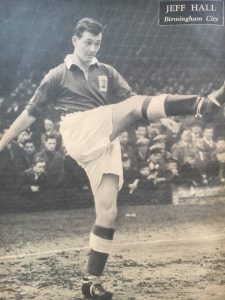 He joined the club in February 1950 and turned pro three months later. Converted from right half to right back Hall took some time to break into the first team at City, making his debut in January 1951 but not becoming a regular until two years later. In 1954-55 he was part of the City team that won the Second Division championship and was also a key member the following season when City finished 6th in the top flight and reached the FA Cup Final where they were beaten by Manchester City in a game made famous by Bert Trautmann’s broken neck 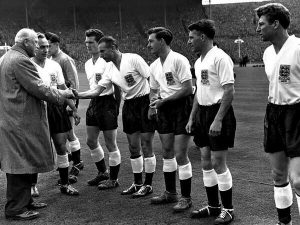 Jeff Hall lines up for England next to Stanley Matthews

Also in 1955-56 Hall received his first international recognition when he was called up to play for England B. He broke into the England first team for the 5-1 win in Denmark and made the right back place his own, playing every one of the next 16 internationals, only one of which was lost.

In each of his 17 starts for his country, Jeff’s full back partner was Roger Byrne of Manchester United, a new record for a full-back partnership. Tragically, both would pass away before their 30th birthday.

On 21 March 1959 Hall played for City in a First Division match at Portsmouth. The appearance was his 229th for the club and the game against their relegation-threatened rivals ended in a 1-1 draw.

The night before the game Hall had complained of having trouble swallowing and at the end of the match he again complained of feeling unwell begging a lift from some of his teammates in a private car rather than travel back to Birmingham on the team coach. 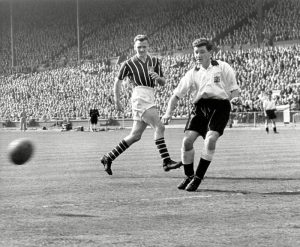 Jeff up against Don Revie in the 1956 FA Cup Final

On the Sunday he went to watch the junior side he helped train play in a five-a-side tournament where they came up against a side coached by Don Revie whom Hall had opposed in the 1956 Cup Final. But the following day he felt worse again and was admitted to hospital where he was quickly diagnosed with polio.

Over the following 12 days his condition deteriorated rapidly and on 4 April, despite three operations within 24 hours of admission he passed away aged just 29 at 9:20 a.m. on April 4th 1959 at Little Bromwich hospital. Hall’s wife of 18 months Dawn who had visited him four times a day since he was admitted and his parents were at his bedside.

Birmingham who hadn’t played since he was first diagnosed called off their match at Newcastle a day later and players in all football league matches wore black armbands.

”Jeff fought his illness as he fought on the football field”, said Birmingham trainer Ken Fish. “With tremendous purpose”.

City centre-half Trevor Smith said of his teammate; “Though he was a wonderful player, the whole team will miss him more off the field”.

After learning of his death, Billy Wright, his England captain who had also become a good friend said: “Not only Birmingham City but the whole of English football will be the poorer now that Jeff has left us.

“After playing with him for England on numerous occasions and being associated with him off the field, I know just what a wonderful player and person he was.”

Birmingham City, and the clubs they had faced prior to and including the Portsmouth match immediately put their players into quarantine whilst staff at the hotel the club had used on the South coast were also put into isolation.

Dennis Howell M.P. for All Saints, Birmingham and a football referee called for the vaccination scheme, then available for those up to the age of 25, should be extended to include all sportsmen and said:  “People who are in a state of physical fatigue are especially vulnerable to the disease. Sportsmen are frequently in this condition”.

Hall’s funeral took place five days after his death in his home village of Wilsden and on the same day a memorial service took place at St Andrews church next to City’s ground.

Hall’s passing sparked a huge change in public perception of the deadly disease, and of the need for inoculation. Within days thousands were queueing to receive the vaccination and the lines grew longer when Dawn appeared on television to talk about her tragic loss.

Prior to Hall’s tragic death only around half of the children eligible for the vaccination had received it. But by 20 April clinics were reporting that they had run out of the vaccine causing a rush shipment of fresh supplies from the U.S. to meet demand.

Dawn also made a recording which was translated into a number of different languages and distributed around the world. Speaking later, she said; “I didn’t want Jeff’s death to be in vain and I certainly didn’t want anyone else to go through the same ordeal.

‘I went on television to talk about my experience and to tell everybody in the country how important it was to be immunised.” 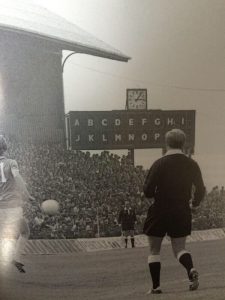 Dawn continued to campaign and help victims of polio right up until her death at the age of 79 and was posthumously awarded the British Empire Medal. Her husband is remembered by a Memorial clock now on top of the main stand at St Andrews, the home of his only professional club, after originally being part of the scoreboard.

The death of Jeff Hall went a long way towards helping people in Britain and worldwide to understand to threat of the deadly polio virus and to take action, encouraging many to be vaccinated. If something can be gained from his tragic loss it is this.