The Man In Brogues 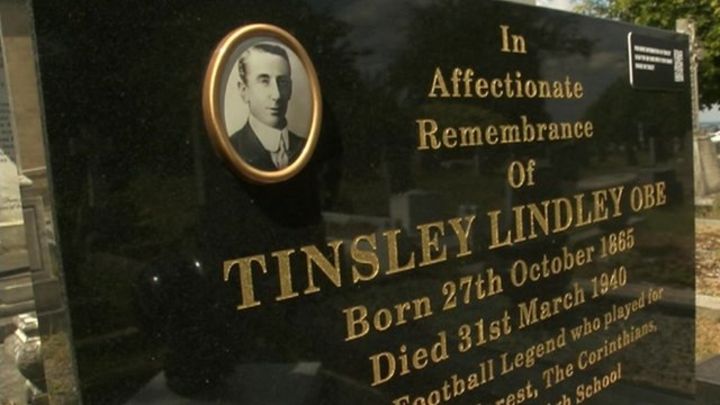 One of the first great footballers never wore boots when playing, preferring to ply his trade in his daily footwear.

When league football started in 1888-89 Notts County, generally recognised as the oldest football club in the world having been founded in 1862, were one of the founder members. Crosstown rivals Nottingham Forest, founded three years after County, also applied to join the league but were rejected and instead joined the Football Alliance a year later, then joining the league three years after that.

Forest played their first game against local rivals County in 1865 and they entered the FA Cup for the first time in 1878-79 beating their local rivals in the 1st Round. They then overcame Sheffield, Old Harrovians and Oxford University to reach the semi-final where eventual winners Old Etonians beat them 2-1.

The club also started the career of one of the first early goalscoring heroes, a man who went by the glorious name of Tinsley Lindley.

Lindley was born in Nottingham on 27 October 1865, one of six children to Leonard, the mayor, and Sarah Anne. Leonard was a lace dresser by trade and the family were comfortably off and lived in the St Mary’s area of the city, one of the better parts and the centre of the lace industry.

He first played football while attending Nottingham High School where he says; ‘I always had a ball with me’ and where he captained the team. Such was the promise he showed that, while still just 16 he was invited to play for the Nottingham Forest reserve team for the 1881-82 season. To say Lindley was impressive is something of an understatement as he scored a hat-trick in his first match and finished his first season with an incredible 85 goals to his name. 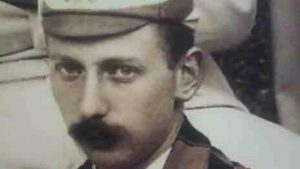 Described as; ‘A beautiful dribbler, a sure passer of the ball, and a thrilling shot’ Lindley also had the asset of excellent speed. The fashion for heavy football boots was a no-no for this particular player and he insisted on playing in the brogues he wore every day.

But just when it looked like Forest might have found themselves a new star Lindley declared that his education came first and he went to Cambridge first to Leys School and then Caius College studying law. He got his degree, going on to achieve a masters and then a law doctorate.

At the same time he earned a Blue at football, skippering the team in his last two years, whilst also playing for the University at cricket and rugby. He would later go on to play first-class cricket, albeit with only moderate success, for Nottinghamshire and rugby for Old Leysians.

He was also elected to play for the famous Corinthians team whilst at Cambridge, making his debut in an 8-1 win over FA Cup holders Blackburn Rovers, and would turn out for the great amateur team right through to the end of his career.

Despite many offers Lindley steadfastly refused to turn professional and said; “The aim of footballers should be to amuse themselves first, not others”. Despite that comment he clearly brought pleasure to many spectators and was one of the biggest stars of his time.

In early 1886 Notts County met Scottish Cup holders Queen’s Park and, with the visitors refusing to play against professionals, had to leave out a number of their regulars. They asked Lindley to ‘guest’ for them and he did, playing a major part in a famous 1-0 win.

In March 1886, while still studying at Cambridge, Lindley, was selected at centre-forward for the England team that played Ireland in Belfast. The visitors, a mix of amateurs and professionals won 6-1 with the 20-year-old Lindley scoring once and his fellow Cambridge student and Corinthians player Benjamin Spilsbury getting four.

Two week later he won his second cap, and scored England’s goal in a 1-1 draw with Scotland at Hampden Park in a match played in torrential rain. The Scots had initially refused to play the match when they found out that their opponents were going to include the professional James Forrest in their line-up. They eventually agreed to go ahead with the match but only on condition that Forrest wore a different shirt to his teammates and that he agreed to forego his weekly wage (£1) from his club, Blackburn Rovers.

Just two days after the Hampden encounter England were in action again, beating Wales 3-1 at Wrexham’s Racecourse Ground. Lindley won his third cap but this time he failed to add to his goal tally.

Lindsey’s next England appearance came at Bramall Lane in February 1887 where he scored a hat-trick in a 7-0 thrashing of Ireland (a game for which actual caps were awarded to the players for the first time) and a few weeks later he scored twice in a 4-0 win over Wales at the Kennington Oval before finishing the international season by scoring once in a 3-2 defeat by Scotland at the Leamington Street ground in Blackburn. 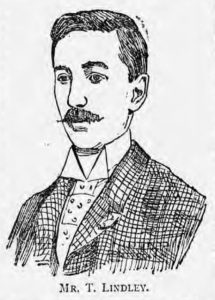 At club level Lindley continued to split his time between Nottingham Forest and Corinthians and on one occasion when playing for the famous all-amateur team at Preston he received the ball at kick-off from Scotsman Dr John Smith and ran through what at the time was considered to be the best team in the land without one of them touching the ball and scored.

The 1888 international campaign features perhaps Lindsey’s greatest match in his country’s colours. The first encounter of the season came against Wales at the Alexandra ground in Crewe. Here the Nottingham man was awarded the captaincy for the first time and scored once as England won 5-1 with Preston man Fred Dewhurst hitting a hat-trick.

A month after the win over Wales, Lindley led his team out at Hampden Park for the encounter with Scotland. He never scored in the match but played a key role as England scored five times in a 17-minute period either side of half time to win 5-0 in front of 20,000 fans and, as the reporter for the Sheffield Daily Telegraph said; “Fairly smothered their opponents, who seemed to be perfectly bewildered”. This was mostly due to the superb inside-forward trio of Lindley, Dewhurst (who scored twice) and John Goodall, who got one. 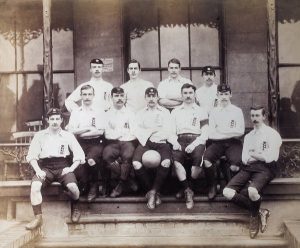 Three weeks later England, again with Lindley as captain, scored five times for the third match in a row, overcoming Ireland 5-1 in Belfast. The skipper scored just once with Dewhurst netting a goal and Aston Villa’s Albert Allen, playing in place of Goodall, scoring a hat-trick on what would prove to be his only international appearance.

In the first game of the 1888-89 international season Lindley was again picked to lead his country against Wales but he chose to play for Nottingham Forest in an FA Cup replay against Chatham instead. That game finished drawn after extra time and Forest lost the second replay. Meanwhile the national team captaincy was handed to right-back PM Walters whose brother AM played left-back (the pair were known as ‘Morning’ and ‘Afternoon’ for obvious reasons) and England ran out 4-1 winners. 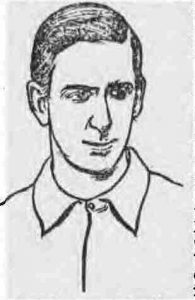 Lindley wasn’t selected for the next match, a 6-1 win over Ireland, but he returned to the side, this time employed on the left-wing, when England lost 3-2 to Scotland at the Oval.

On 15 March 1890 England played two matches on the same day. One team beat Ireland 9-1 in Belfast whilst Lindley skippered the side, and scored, in a 3-1 success over Wales at Wrexham. He also played in the 1-1 draw with Scotland.

On 7 March 1891 Lindley made his 13th and final appearance for his country. He was made captain again and scored twice, bringing his goal-tally to 13, in a 6-1 win over Ireland at Molineux.

Whilst Lindley’s international career glittered this wasn’t really replicated at club level. During his time with Nottingham Forest the team won the Football Alliance and twice reached the FA Cup semi-final. In the first of these fell to Queen’s Park whilst in the second eventual winners West Bromwich Albion knocked them out after a replay.

Although his loyalties clearly lay with Cambridge University, Nottingham Forest and Corinthians, Lindley’s status as an amateur enabled him to play for anyone and he took full advantage. As well as earning representative honours for The Gentlemen, Nottingham and District, the North and the South and London he also made appearances for Swifts, Preston North End, the Crusaders and Notts County.

One appearance for Notts County caused trouble. With their regular centre-forward suspended County asked Lindley to play in a league match against Aston Villa. The game finished all-square at 1-1 but Villa appealed against the inclusion of Lindley as they claimed he wasn’t registered.

The league upheld the appeal, deducted County a point and fined them £5. The club disagreed and appealed against the decisio, the upshot of which saw the fine increased to £30 and the points deduction increased to two! 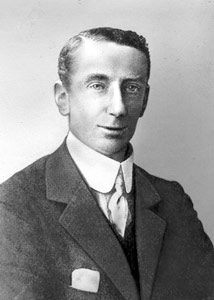 Lindley carried on playing for Forest and Corinthians until 1899 when he hung up his brogues to focus on his work as a barrister and later, as a circuit judge whilst also lecturing in law at Nottingham University. During World War One he took on the joint roles of Chief Officer of the Nottinghamshire Special Constabulary and deputy director of the Nottinghamshire Territorial Association, the joint roles earning him an O.B E in 1918. 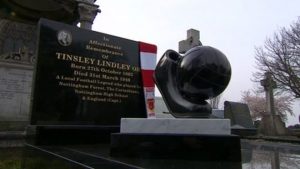 He continued practicing law and living in Nottingham with his wife Constance until contracting pneumonia and passing away on 31 March 1940 at the age of 74. He lay in an unmarked grave in Wilford Hill Cemetery until 2014 when Nottingham Forest historian Ron Clarke launched a campaign which saw a headstone erected.

His major claim to fame might be that quirky habit of wearing brogues rather than football boots but it is clear that there was much more to Tinsley Lindley than that and, although he never played as a pro he was clearly one of football’s first superstars.