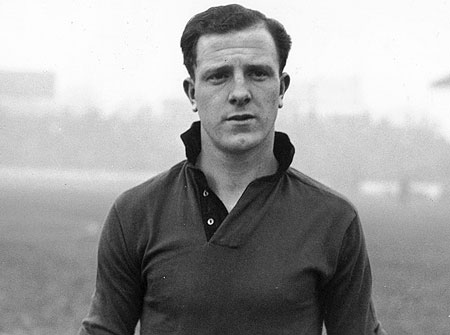 LITTLE could Stan Cullis or Joe Mercer know when they attended Cambridge Road school together that they would both go on to reach the very top in football, both on and off the field

Cullis and Mercer were chosen to represent Ellesmere Port boys against Chester in 1929 and the professional scouts were out in force. But the future for Cullis was already decided by the fact that his father was a passionate Wolves fan. “None of the scouts were allowed to talk to me,” Cullis, the youngest of 10 children said in his autobiography. “My father told them ‘when I consider my boy good enough, he will join Wolverhampton Wanderers’”.

It might seem odd to find ardent Wolves fans living in Ellesmere Port but in fact Mr Cullis and his family had been relocated there as part of the war effort by his employers the Wolverhampton Corrugated Iron Company.

He did in fact, have a trial at Bolton Wanderers but in 1934, aged 18, it was decided he was good enough and the renowned Major Frank Buckley – known as the ‘martinet of Molineux’ – signed him for Wolves after he had spent a week at the club.

During his first year while playing for the Wolves ‘A’ team, Buckley took him aside and said ‘Son, if you listen and do as you’re told I will make you captain of Wolves one day’. Within a year he had made his first team debut, in two he was a regular and in the third he was made captain. Cullis would later say that Buckley taught him; “to handle footballers with a rigorous authority and far more iron than velvet in your touch.” 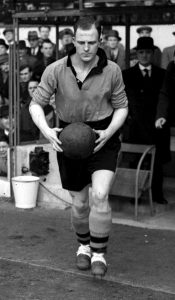 He led Wolves as they became the ‘nearly team’ in the years leading up to World War Two. Runners-up in the First Division in the 1937-38 season to Arsenal and in 1938-39 to Everton, they completed an unenviable double in the second season with defeat in the FA Cup Final to Portsmouth.

Of his manager Cullis said: “Buckley spent many hours drilling me in the precious art of captaincy, telling me in no ambiguous terms that I was to be the boss on the field. No youngster of 18 could ask for a better instructor than the Major, who laid the foundations of the modern Wolves during his 16 years at Molineux”.

Early in the 1937-38 season Cullis was called up by England for the first time and he made his debut in the 5-1 win over Ireland in Belfast.

In May 1938 during their end of season tour England travelled to Berlin to play Germany. Prior to the match Sir Neville Henderson, the British ambassador to Germany informed FA Secretary Stanley Rous that the England players would be expected to give the Nazi salute before the game. The players were informed of this and after the dressing room ‘erupted’ (according to Stanley Matthews in his autobiography) it was explained to them that due to the sensitivity of Anglo-German relations, giving the salute was an order and all, reluctantly, agreed. All that is, except Cullis who responded with a terse ‘count me out’.

He was dropped from the team for his refusal but was playing for his country again before the end of the tour and later that year played for the England team that beat the Rest of Europe in the FA’s 75th anniversary match. 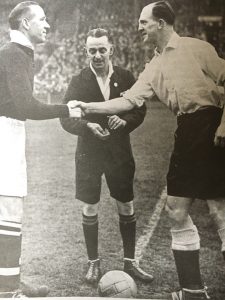 He was made captain of his country (at 22 years old he was England’s youngest ever at the time) for the game against Romania in Bucharest in May 1939. The team that day also included old friend Mercer and Tommy Lawton who later said that Cullis was; “The best centre-half I have met.

“He had the resilience of a concrete wall, the speed of a whippet and the footwork of a ballet dancer”. 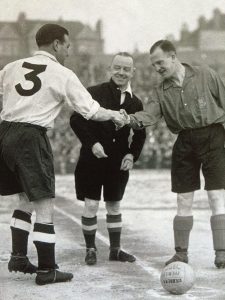 Like his former school friend and teammate Joe Mercer, Cullis had his best footballing years taken away by World War Two. Also like Mercer he served his time as a Physical Training Instructor along with playing for Wolves, guesting for Aldershot, Gillingham, Fulham and Liverpool and also appearing in 20 wartime internationals for his country. In one game he was hit in the face by a ball and spent five days in hospital with severe concussion, not the first time this had happened during his career. He was warned that by continuing to play he was risking his life and told to keep away from the game for at least six months. 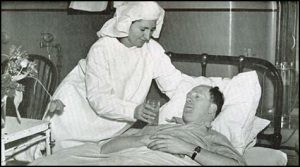 After six-and-a-half years in the Army, including time spent in Italy, Cullis returned to civilian life and did carry on playing after the war ended but only for one more season. In the final game of the 1946-47 season Wolves took on Liverpool with the First Division title on the line. They lost 2-1 in what proved to be his final game. With doctors continuing to warn him that even heading a ball could cause serious injury or worse he agreed that the risk to his health was too great and hung up his boots aged just 31.

After retiring Cullis took on the role of assistant manager at Molineux to Ted Vizard, and after serving a year’s apprenticeship under the Welshman took over as manager in June 1948 at just 31 years of age. 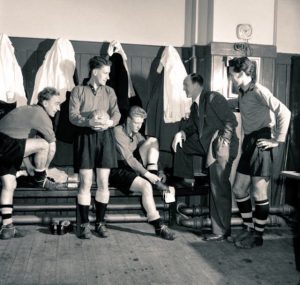 Cullis, a tough disciplinarian who both demanded and gave 100% immediately installed a new training regime, and insisted that his side play a high-tempo game that would pressure opponents into mistakes. Each player was given individual fitness targets for running and jumping. In this he was truly innovative and his methods had an almost immediate impact.

In 1949, at the end of his first season in charge, and with the players he had inherited, Cullis led Wolves out at Wembley for the FA Cup final against Leicester City. His team ran out 3-1 winners with goals from Jesse Pye (2) and Sammy Smyth securing the club’s first major trophy since 1908. 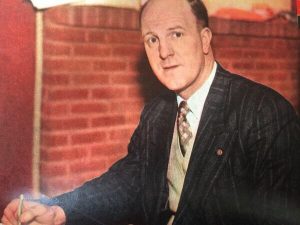 Wolves finished runners-up to Portsmouth in the 1949-50 title race and then had a couple of disappointing campaigns as Cullis set about creating his own team. Once he had got the right line-up together Wolves dominated English football.

They captured the title for the first time in 1953-54 and would win it twice more, as well as a second FA Cup, in the next eight seasons during which they would never finish lower than sixth.

And they also took on Europe, most famously against Honved. In 1954, after England had suffered two humbling defeats at the hands of Hungary, Wolves invited the Hungarian champions, who had provided seven of the team that thrashed the English, to Molineux for one of a series of prestigious floodlit friendlies. 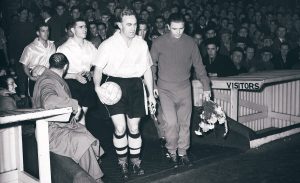 ‘Champions of the World’

A 55,000 crowd saw Wolves, wearing specially-designed fluorescent gold shirts, fall behind 2-0 early on. At half-time Cullis sent a number of the club’s apprentices, including Ron Atkinson, out to water the already wet pitch with the intention of slowing the Hungarians down. Johnny Hancocks pulled one back with a penalty early in the second half and then, perhaps benefitting from the Cullis training regime they finished the game strongly with a pair of late Roy Swinbourne goals securing a memorable 3-2 win.

After the game Cullis commented that his team were ‘Champions of the World’. The comment sparked a Europe-wide debate on the merits of teams from various countries and resulted in the creation two years later of the European Cup.

After the excellent period throughout the 50s and at the turn of the decade which included runs to the European Cup quarter final in 1960 and Cup Winners Cup semi in 1961 Wolves started to struggle. In 1961-62 they finished 18th, although they bounced back to 5th the following year. 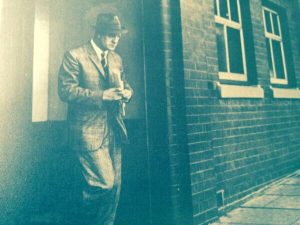 In September 1964, after a 16th-place finish the previous season and a poor start to the new campaign, where he had missed five of the team’s first seven games due to illness, Cullis returned to the club to be told by new chairman John Ireland that he was sacked.

Cullis said: “I simply created a yardstick which people could criticise me against,” but the manner of the dismissal – he would say later that Ireland ‘so obviously enjoyed sacking me’ – and the shoddy way he was treated must have left a sour taste in the mouth of a man who had once said; “You only have one life and I gave mine to Wolves”.

After leaving the game for a while he returned to manage Birmingham City but it certainly appeared that the spark had gone and, despite some success he retired in 1970.

Stan Cullis passed away peacefully in 2001 aged 84. He was honoured by Wolves for the 30 years of service he gave the club with the renaming of a stand and building of a statue at Molineux ensuring his name will forever be remembered at the famous stadium. 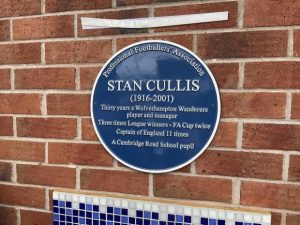 The Cambridge Road school in Ellesmere Port that both Cullis and Joe Mercer attended recently unveiled a plaque in honour of a great footballer, and a man prepared to stand by his beliefs, a true example.

Son Andrew, outgoing PFA chief Gordon Taylor and former Wolves great John Richards were among those who attended the ceremony with the school also hosting an exhibition honouring both Cullis and Mercer.

Ellesmere Port Mayor, councillor Lisa Denton said at the ceremony: “I’m really pleased that such an icon of football has been recognised.

“The plaque will remind us of his achievements and inspire the younger generation in Ellesmere Port”.

The defiance shown in 1938 in Berlin shows that the man once called ‘The Passionate Puritan’ deserves greater recognition throughout the game than just at the ground he called home. 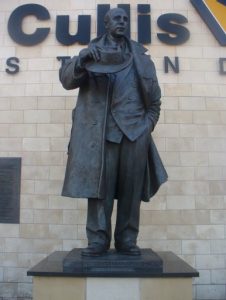