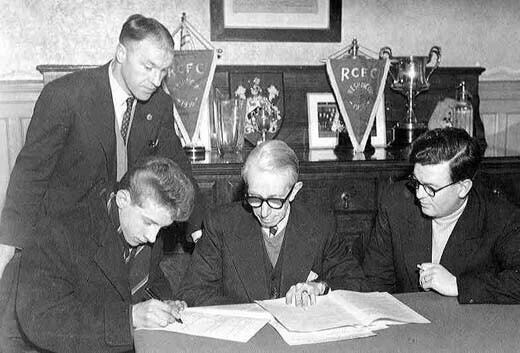 “I find it impossible to compare him, in his teens, with any one footballer I’ve seen. He has everything – a first-class football brain, phenomenal ball control, a fine shot, stamina and fight”.
Huddersfield Town manager Bill Shankly talks about 18-year-old Denis Law 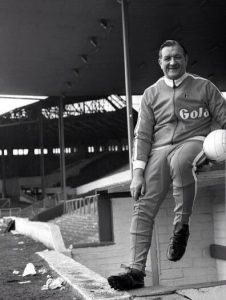 Bob Paisley’s record during his nine seasons as manager of Liverpool is just about as good as it can get: 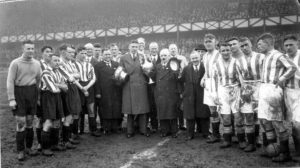 Want to win the top-flight crown in England? Don’t wear stripes.
No team since Sunderland (above, left) in 1935-36 has won the 1st Division or Premier League crown wearing striped shirts. 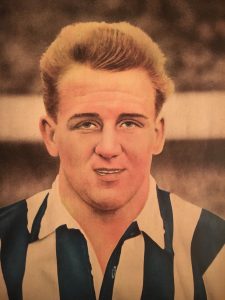 In October 1959 tough-tackling Maurice Setters was sent off playing for West Bromwich Albion against Sheffield Wednesday. Fast-forward eight years and, after a lengthy spell at Manchester United, Setters is now at Stoke and he gets sent off again, this time against West Bromwich. And, to make matters worse, the referee, Mr Cowan, officiated in both matches.

Setters protested his innocence after the second ordering-off saying; “I collided with their keeper going up to head a cross. I slid into the back of the net and was lying there with my boots tangled up when one of their players took a great kick at me. I somehow managed to get up, there was a bit of a skirmish and this fellow dropped down in front of me. The referee sent me off for butting and I never even touched him!” 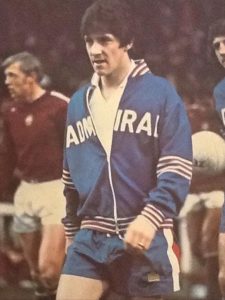 NO Haircut? You’re out

As a youngster Gordon Hill was on QPR’s books. However, there was a problem, and it was the length of Gordon’s hair. Chief scout Derek Healey told the winger to either get a haircut or not return to the club. Gordon chose long hair and the West Londoners lost a prospect.

Next, Gordon joined Southend United as an amateur – he was working as a trainee clerk in a land reclamation office – and he won amateur international honours for his country. However, Southend manager Arthur Rowley decided not to offer young Gordon pro terms so, after failing to show up for a match, he was released by the club.

Spells at Staines Town and Southall (where he played alongside brother Cyril) followed and such was his form with the latter that Arsenal and Millwall sent scouts to watch him play.

It was Millwall who moved first and Hill joined the East London club in 1973. Just over two years and 90 matches later (including an appearance against Southend where he scored a pair of very satisfying goals) he had moved on, for £70,000 to Manchester United, where he played in two FA Cup finals and won six England caps.

Hill then moved on to Derby County before, in 1980, joining QPR for £150,000, which made that long-ago haircut ultimatum pretty expensive! 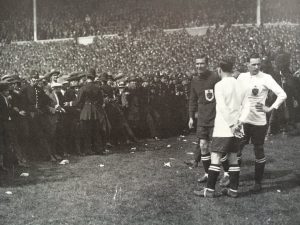 FIRST Goalscorer, where are you?

It is pretty well known that the first-ever Wembley FA Cup Final goal was scored by David Jack for Bolton Wanderers against West Ham United.

What is not quite so well-known is that, after the match Jack was swept up in a melee of autograph hunters, missed the team coach home, had to catch the tube and was late for the celebration dinner.