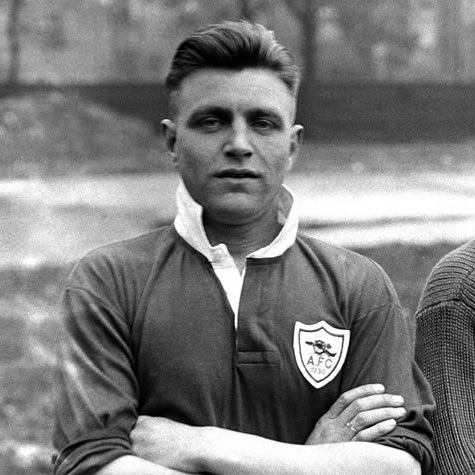 EDRIS Hapgood was born in Bristol in 1908, the ninth of ten children. His first job after leaving school was as a milkman – working for his brother – whilst playing football for St Phillips Adult School Juniors.

His football life had not had the most auspicious of starts. While playing on the street near his home, he smashed a window, was hauled up before the magistrates and fined 2/6

Whilst playing for St Phillips, Edris (better known as Eddie) was spotted by a director of Bristol Rovers and in May 1927 invited to play in a trial against Taunton United. After impressing in the trial, Rovers offered him £8 per week, which included a summer job in the coal delivery business of one of the directors, to join them. However Southern League Kettering Town made a counter-offer – £4 per week (£3 in the close-season) plus he could keep his job as a milkman. He chose milk, and Kettering.

After his first game for his new club the local press were wondering why Kettering had ‘bought so useless a player’ but within six months Hapgood had much such progress that Arsenal’s Herbert Chapman offered Kettering £750 plus a friendly match and the full-back moved to North London. Hapgood received a £10 signing-on fee from the Gunners but this was lost to a gang of card sharks on the train to London. 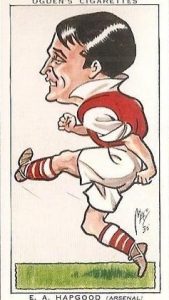 Within a month of signing Hapgood made his debut, against Birmingham City on 19 November 1927 though that first season he was mostly backup for Horace Cope who Chapman had signed from Notts County a year before.

Hapgood made just three starts in 1927-28 but the following season he split playing time with Cope and by the end of it, was first choice.

Hapgood‘ s reputation quickly grew. Arsenal trainer Tom Whitaker said of him; “Hapgood was an extraordinary youngster. Confident beyond his years, some people found him insufferable at times. But it was the supreme confidence in his own ability that made him such a great player”.

The only thing holding Hapgood back at this stage of his career seemed to be that he was often knocked out when heading the ball. Whittaker decided his lack of pounds (he weighed 132lbs, 60kg at the time), was the reason; “Eventually I spotted the cause”, said Whittaker. “We had to build him up. At that time he was a vegetarian but I decided he should eat meat”. 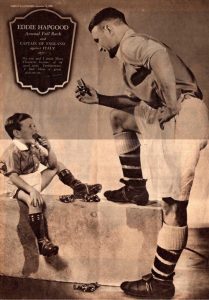 The close of the 1929-30 season brought Hapgood the first of many honours that would come his, and Arsenal’s way.

Arsenal took the field against Huddersfield Town in the 1930 FA Cup final as slight underdogs, they had finished a few places below their Yorkshire rivals in the title race that season, and the game was notable for pitting Herbert Chapman’s current charges against his former team. 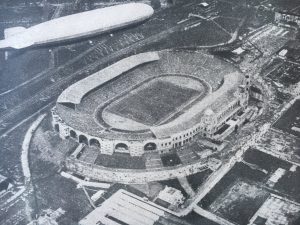 James – and Zeppelin the Stars

Hapgood was given a tough time that afternoon by Huddersfield’s brilliant Scottish winger Alex Jackson but he held him at bay and it was another Scot, Alex James, who proved star of the show (along with the Graf Zeppelin hovering over the ground) as Arsenal ran out 2-0 victors.

The following season brought two major trophies to Highbury with October’s Charity Shield success over reigning champions Sheffield Wednesday at Stamford Bridge the prelude. Then came the much more important honour of the league, as the Gunners romped to their first-ever title finishing seven points clear of Aston Villa.

The only worry came in the much wider form of the increase in power of the facist parties in Germany and Italy, an occurrence which led Hapgood to remark that he was; “concerned about what’s happening throughout the world”.

The 1931-32 season was one of near-misses for Hapgood and his teammates. Although the Charity Shield was retained with a victory over West Bromwich Albion at Villa Park, they missed out on the two biggest prizes. In the League, 44 goals from Dixie Dean fired Everton to the crown, finishing two points clear of the Gunners. Arsenal made it to Wembley for the Cup final but, after taking the lead, lost 2-1 to Newcastle in the match that featured the famous ‘over-the-line’ goal.

In 1932-33 Arsenal claimed their second title and Hapgood was chosen for England’s end-of-season European tour. It was an inexperienced squad that went on the tour and he was one of six players chosen to make his debut in the 1-1 draw against Italy in Rome on 13 May 1933. He kept his place for the 4-0 win over Switzerland and was a regular for his country from then on.

Arsenal retained their title (and regained the Charity Shield) the following season, finishing three points clear of Huddersfield, but tragically lost manager Herbert Chapman who died of pneumonia in January 1934. Reserve team boss Joe Shaw took over as caretaker for the remainder of the campaign after which former programme editor George Allison was given the job. 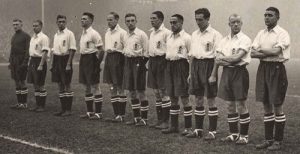 In November 1934 Italy, World Cup winners five months before, were invited to play England at Highbury. Seven Arsenal players, including debutants George Male and Ted Drake, were in the England team and Hapgood was named captain. He led his men to a 3-2 win in a bad-tempered match. 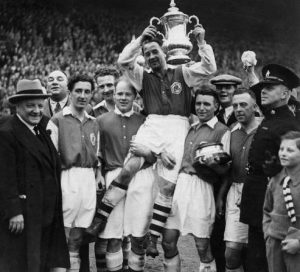 Hapgood did not dislodge Scotsman Alex James who remained as Arsenal skipper when they won their third successive title in 1934-35 and a second FA Cup in 1936. Although James was skipper, Hapgood’s attitude was certainly a major factor. Club secretary Bob Wall would later write; “Eddie set Arsenal players the highest possible example in technical skill and personal behaviour”.

In the summer of 1937 Alex James hung up his boots, Hapgood was the natural choice as successor and he led the Gunners to yet another title in 1937-38 and also to victory in the following season’s Charity Shield and in the Football League (South A) after the game was regionalised following the outbreak of WW2.

In 1938 Hapgood led England on their European tour which included what became an infamous game in Berlin. In his autobiography Stanley Matthews recalled how the team were getting ready for the match when an FA official came into the dressing room and informed them that they would be expected to give the facist salute. “The dressing room erupted”, said Matthews. “There was bedlam.

“All the England players were livid and totally opposed to this, myself included. Eddie Hapgood, normally a respectful and devoted captain, wagged his finger at the official and told him what he could do with the Nazi salute, which involved putting it where the sun doesn’t shine”. 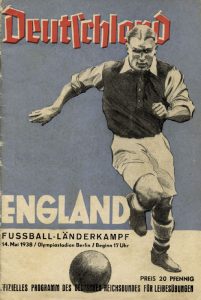 Hapgood himself says he responded by saying; “We are of the British Empire and I do not see any reason why we should give the Nazi salute”.

The official left the room only to return a few minutes later saying that he had received a direct order from the British Ambassador and that the political situation was so sensitive that it ‘only needed a spark to set Europe alight. One player, Stan Cullis, still refused and was replaced and the remainder reluctantly agreed. England won the match 6-3 in front of a reported crowd of 110,000.

Hapgood continued to lead his country until his 30th and final appearance against Yugoslavia in Belgrade in 1939. In that match he damaged ankle ligaments after 15 minutes but continued playing.

When the war started Hapgood joined the RAF although he continued to play for Arsenal, guest for other teams and skipper England when duties allowed.

Sadly, Hapgood would leave Highbury on less-than amicable terms. When football resumed in 1946-47 he was 37 and clearly too old to continue with the Gunners. He expected a long-service bonus, to which he would have been entitled had wartime service been taken into account. Sadly, Arsenal decided that these years did not count and refused to pay the bonus or award him a testimonial. 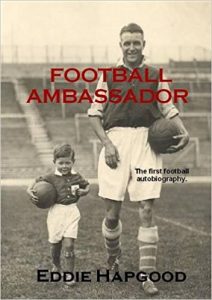 After attempting to continue his playing career at Shrewsbury, Hapgood moved into management with unsuccessful spells at Blackburn Rovers, Watford and Bath City. After leaving the game completely and falling on hard times he wrote to Arsenal looking for help. They sent him £30. At the end of his career he wrote ‘Football Ambassador’ widely recognised as the first footballer’s autobiography and featuring the wonderful cover shot with son Tony as seen above.

He then ran YMCA hostels in Berkshire and Dorset but then developed heart trouble forcing early retirement. He passed away in 1973, aged 64

Former teammate Bernard Joy in his book ‘Forward Arsenal’ called Hapgood; “Enthusiastic volatile and poised. A born captain”, and that is probably one of the most apt ways to describe a man who was a fine servant to both club and country.