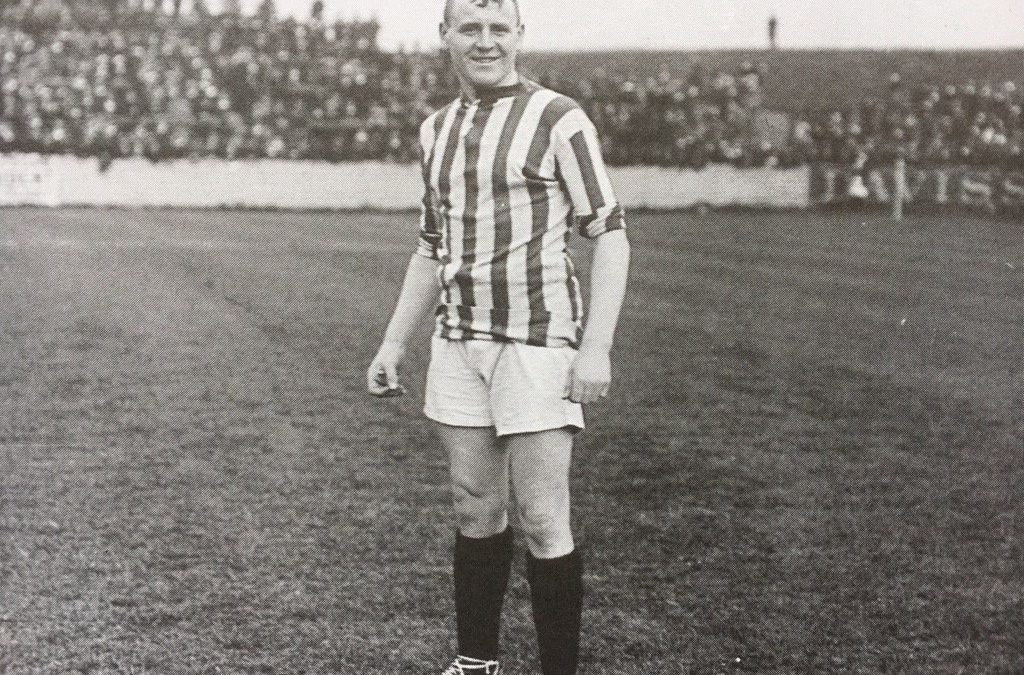 Charlie Roberts was without doubt the first great Manchester United captain. And off the pitch as well as on it, he was a leader.

Roberts, born in Darlington in 1883, started his career with Bishop Auckland whilst plying his trade as an iron furnace worker. At 20 years old he earned a move to Grimsby Town and in 1904 after just 34 games for the Lincolnshire club he came to the attention of Manchester United. Newly wealthy after investment from local brewer John Henry Davies the club paid a record fee of £600 for the centre half.

In his first season with United, Roberts incurred the wrath of the FA (not for the last time) by wearing ‘very short knickers’ causing football’s governing body to pass a regulation that players should wear shorts that covered the knees. He ignored the regulation and continued to wear the shorter shorts throughout his career.

In early 1905 Roberts earned his first international cap, appearing in the 1-1 draw with Ireland at Ayresome Park. He followed up by playing against both Scotland and Wales that season and the following year, led United to promotion to the 1st Division.

Strong in the tackle, excellent in the air and a first-rate passer of the ball, Roberts took playing at centre-half to a new level. Prior to him the role of the pivot was to win the ball and give it to others to play or just get it out of the danger area. He could do all of that but could play too, seeking out teammates with searching passes and venturing further upfield to chip in with goals himself.

In the summer of 1906 United benefited from the turmoil at local rivals Manchester City. City were involved in an illegal payments scandal and were ordered to sell all of their players. Four ended up at United, joining Billy Meredith who had already moved across the city earlier that summer. They finished the 1906-07 season in an encouraging 8th place.

Towards the end of that season Thomas Blackstock, another of the players who had joined the club from Manchester City collapsed after heading the ball during a match against St Helens. He died soon after and at the inquest the coroner recorded a verdict of ‘death by natural causes’ which meant that his family received no compensation from the club or the game’s governing body.

Appalled at the verdict, Roberts along with teammate Meredith and others, set up the Association Football Players Union to protect the rights of his fellow workers. 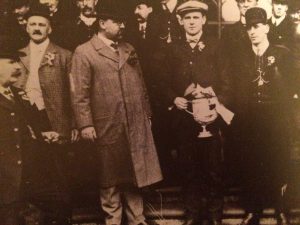 Charlie Roberts with the FA Cup

On the pitch things could not have been going much better. 1907-08 started with United winning 13 of their first 14 games and they ended up taking the crown by nine points. This started their first period as one of the country’s top clubs. The following season they won the FA Cup for the first time and two years later, took the title again, all led by Roberts’ excellent play and commanding presence on the pitch.

The 1909 FA Cup victory was marked by a humorous incident involving Roberts. The Fourth Round match at Burnley was played in freezing conditions and in the midst of a blizzard. It was so cold in fact, that referee W.H. Bamlett decided to abandon the game with Burnley winning 1-0. It was so cold in fact, that when Mr Bamlett decided to blow the whistle abandoning the match he found that his lips were too numb. So he got Roberts to blow the whistle for him calling proceedings to an end. The match was re-played five days later and United ran out 3-2 winners.

The FA Cup success saw another brush with authority. Prior to the kick-off of the final against Bristol City at Crystal Palace, FA secretary Sir Frederick Wall tried to enter the United dressing-room. He was told ‘in no uncertain terms’ by Roberts that he was not welcome and the comment reportedly left the distinguished official ‘furious’.

Off the field, the disagreements between the FA and the AFPU continued. At their AGM in 1908 the FA reaffirmed the maximum wage and in 1909 they ordered all players to leave the Union. Many left but the Manchester United players refused and as a result they were all suspended by the club. 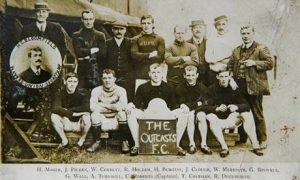 The players continued to train together and after training at Fallowfield Stadium one day a photographer wanted to take a team photo. “Whilst the boys were being arranged” recalled Roberts in his memoirs, “I obtained a piece of wood and wrote on it ‘The Outcasts Football Club 1909’ and sat down with it in front of me to be photographed”.

The FA finally relented in late August and allowed players to be members of the AFPU although only on condition that the Union renounce all aspirations to trade union status, effectively negating any real power 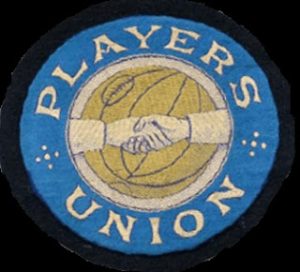 On September 1 United played their first match of the season and the players wore AFPU armbands (which were later banned by the FA). It took six months for the players to receive the back pay that was due to them and Roberts never got the benefit match against Newcastle United that had been arranged to recognise his loyal service to the club.

At a later meeting of the AFPU the players voted overwhelmingly to leave the General Federation of Trade Unions causing Roberts to bemoan: “I know of no class of work-people who are less able to look after themselves than footballers. They are like a lot of sheep”.

Roberts stayed at United until 1913 playing a total of 271 games and scoring 22 goals. He then moved to Oldham Athletic for £1,750 (giving the club a profit of £1150 after nine years of service), and brought success to his new club almost immediately. 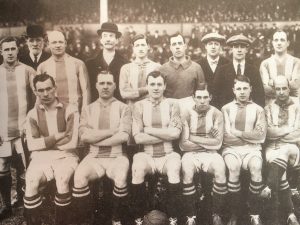 In the 1914-15 season he led Oldham to the runners up spot in the Championship behind Everton, still their highest-ever finishing position, and he played a total of 72 games for the club before his career was brought to an end by the outbreak of World War One.

After the end of the war Roberts took over as Chairman of the Association of Players; Union, a role he held until 1921 when he resigned to take over as manager of Oldham.

His last entry in the minutes of the Union’s AGM ended with the words; “I like to think of myself that in the future I can say ‘Charlie you have done your duty to your fellow players’”

After spending just over a year as manager at Oldham, Roberts left the game completely and returned to running his newsagents shop, also setting up a wholesale tobacconist business in Manchester. 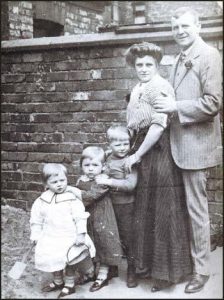 Charlie Roberts and his family

He continued to live in the city until in 1939 he passed away after an operation for a brain injury quite possibly caused by many years of heading footballs. He was just 56.

Clearly an outstanding footballer who played a major role in taking Manchester United to the forefront of English football, Roberts was also years ahead of his time in his campaigns for the rights of players as workers. He once said: “Try to remember that Union is strength, and without it you can do nothing.”

Football, and indeed footballers, will forever be indebted to Charlie Roberts.