DUNCAN – IN OTHER PEOPLE’S WORDS 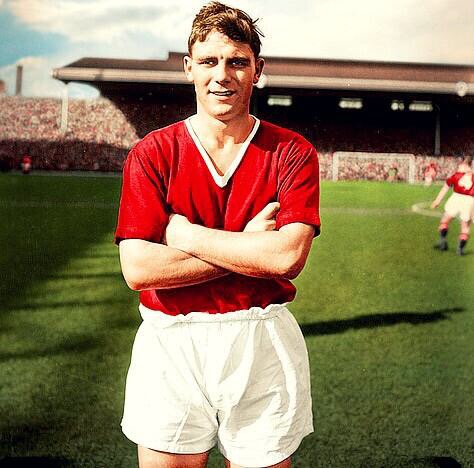 MANY words have been written, and by people with far more knowledge about him than us – about the late, great Duncan Edwards.

So rather than write yet another, we’ve put together a selection of what some of the finest had to say about one of the greatest. 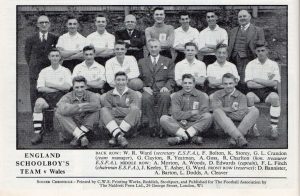 “When he heads the ball it is not a flabby flirtation with fortune. It is bold and decisive. When he tackles it is with a man-trap bite and when he shoots with either foot not even Jack Rowley – The pride of Old Trafford – shoots harder. Though nobody can tell exactly what will happen when Edwards explodes into First Division football one thing is certain: it will be spectacular”. News Chronicle writer George Follows when Duncan was 16 1/2. 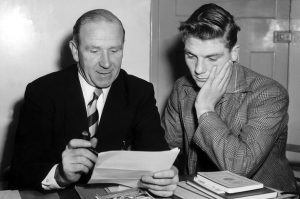 “When he first came to Old Trafford I tried to find fault with Duncan but I couldn’t find one. He was never really a boy in football terms, he was always a man”. Sir Matt Busby. 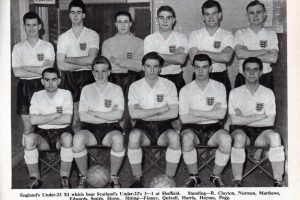 “He was so good, when he was around you, you thought anything was possible”. Bobby Charlton.

“Where the hell did they find him? They’ve built battleships on the Clyde that are smaller and less formidable”. Scotland’s Lawrie Reilly to teammate Tommy Docherty at half-time during Duncan’s international debut.

“He was so strong people could only see the power, but he had a most delicate touch”. Tom Finney. 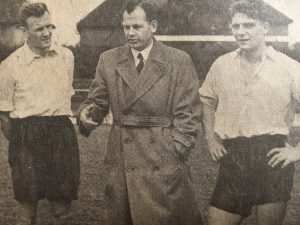 “You don’t hear many professionals talk lightly of greatness because it is so rare, but that is what I saw in Duncan Edwards the first time I set eyes on him. He is the kind of player managers dream about”. Don Revie.

“He was more than a great player – sometimes he seemed like some bright light in the sky”. Bobby Charlton again. 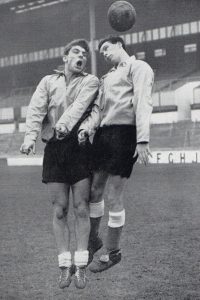 “What is beyond dispute is that Duncan Edwards, at the age of 21 was the finest young player in this country at that time and would surely have gone on to be one of the greatest players the world has ever seen”. Bobby Robson

“There is no doubt in my mind that Duncan would have become the greatest player ever. Not just in British football but the best in the world. George Best was something special as were Pele and Maradona, but in my mind Duncan was much better in terms of all-round ability and skill”. Tommy Docherty, opponent.

“He was Roy Keane and Bryan Robson combined, but in a bigger body. He could play as an attacker, creator or defender and be the best player on the pitch. He was world-class when United had the ball and when the opposition had the ball he was our best defender”. Wilf McGuinness. Former teammate and Manchester United manager. 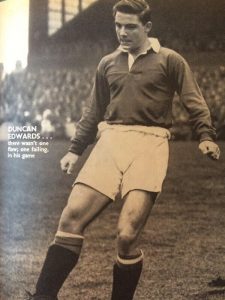 “I am absolutely sure that if his career had had a decent span he would have proved himself the greatest player we have ever seen. There wasn’t one flaw, one failing in his game”. Charlton again.

“When United won the league in 1956 they were losing to Blackpool. They turned to Duncan at half-time and said: ‘come on Duncan, get us going’. So you’ve got John Berry and all these experienced players in the team and they turned to Duncan Edwards as their saviour at just 19. That tells you everything”. Sir Alex Ferguson.

“One of the greatest players I ever saw. He was a colossus, he would come forward and score and then be back defending. Make no mistake, he’d have no problem playing in the modern game”. Graham Taylor.

“The bigger the occasion, the better he liked it”. Sir Matt Busby.

“When I used to hear Muhammad Ali proclaim to the world that he was the greatest, I used to smile. You see, the greatest of them all was an English footballer named Duncan Edwards”. Jimmy Murphy, Manchester United assistant manager.

“He opened the scoring with a cracking shot that had me turning to my Dad with a ‘Did you see that?’ look. Duncan was marvellous. Everything he did comes back to me as if it were yesterday. Such strength, such poise”. Terry Venables who went with his father to see Duncan’s last league game in England, a 6-4 win for Manchester United at Arsenal.

“I feel terrible trying to explain to people just how good he was. His death was the single biggest tragedy ever to happen to Manchester United and English football”. Charlton, yet again.

“The name of Duncan Edwards was on the lips of everyone who saw this match. Duncan tackled like a lion, attacked at every opportunity and topped it off with a cracker of a goal. He was still only 19 but was already a world-class player”. Billy Wright on Duncan’s performance in the 3-1 win over Germany in 1956. 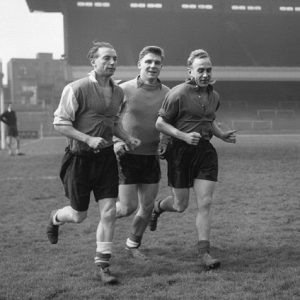 “You can play him anywhere and he would slot into that position as if he’d been playing there season after season. When the going gets rough, Duncan is like a rock in a raging sea”. Sir Stanley Matthews.

“People still haven’t forgotten. Strangers come up and tell me ‘he was a good un’”
Then 83-year-old Anne Edwards, talking 35 years after her son had lost his life at Munich. 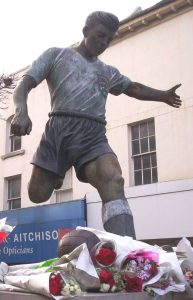 ‘A day of memory, sad to recall
Without farewell he left us all’
The inscription on Duncan’s headstone.