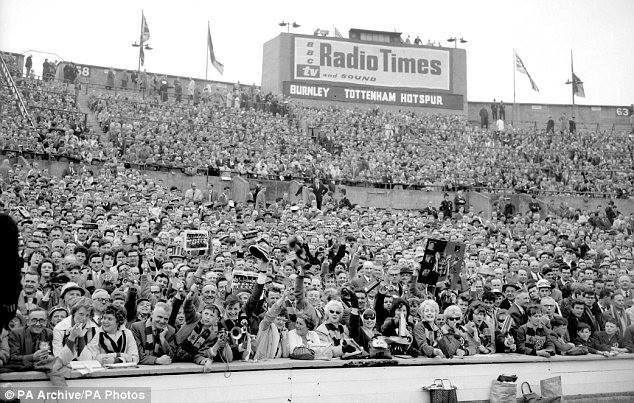 In the 1960-61 season Tottenham Hotspur had completed the fabled League and F.A. Cup double, the first team to manage the feat in English football since Aston Villa 64 years before

For 1961-62 you might have expected them to be even stronger with the £99,999 arrival from Milan of Jimmy Greaves but they would finish third in the title race four points behind Alf Ramsey’s Ipswich Town team who shocked football by claiming the crown in their first season after promotion.

Spurs also missed out on their first stab at European football, reaching the semi-finals of the European Cup and putting up a gallant fight  before going down 4-3 in aggregate to eventual champions Benfica. 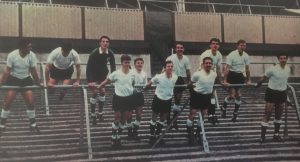 So that left the F.A. Cup as the only possible source of honours for Bill Nicholson’s men as they attempted to win the trophy again after beating Leicester City the previous year. 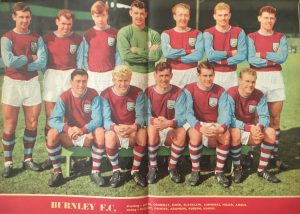 Meanwhile Burnley, 1st Division champions in 1959-60, finished second in the league race in ‘61-‘62 and were clearly still a major force in English football. 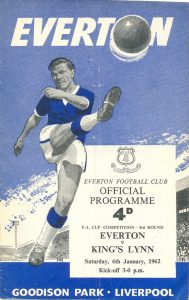 Only three non-league teams made it through to the 3rd round of the 1961-62 tournament. King’s Lynn, having overcome Coventry City at Highfield Road in the 2nd Round, were given the daunting task of facing Everton at Goodison Park and the East Anglians fell to a 4-0 defeat. The other two non-league teams, Morecambe and Weymouth who had beaten Chester and Newport respectively, met.

It was Weymouth who made it through, overcoming the North-West team 1-0 at Morecambe’s Christie Park to progress to the 4th Round. Elsewhere soon-to-be-2nd Division Champs Liverpool got the better of soon-to-be relegated Chelsea 4-3 in a thriller at Anfield and high-flying West Ham United, who would end the season 8th in the top flight were humbled 3-0 at 2nd Division Plymouth Argyle. Spurs battled to a 3-3 against Birmingham City at St Andrews before winning the replay 4-2 at White Hart Lane whilst Burnley thrashed Queen’s Park Rangers 6-1 at Turf Moor. 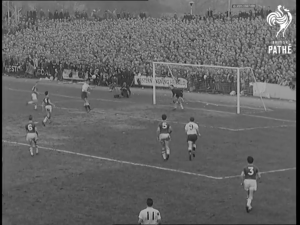 Weymouth’s brief brush with the big time reached its final destination in the 4th round when they lost 2-0 to Preston North End at Deepdale in a Monday rematch after the original staging due to fog and Plymouth Argyle’s run also came to an abrupt end when they were hammered 5-1 at Home Park by Spurs who got two goals from Jimmy Greaves and one each from Terry Medwin, Cliff Jones and John White. Burnley were held to a surprise home draw by Leyton Orient but the Lancashire side then travelled to Brisbane Road and emerged with a 1-0 win thanks to a Brian Miller header.

An East Anglian derby saw Norwich overcome local rivals Ipswich in a replay at Portman Road and there was a ‘clash of the giants’ at Old Trafford where Manchester United saw off Arsenal with a goal from Maurice Setters though, to be honest, neither side were enjoying seasons to remember. There was an upset at St James’s Park where Terry Bly got the only goal of the as Peterborough got the better of Newcastle United. 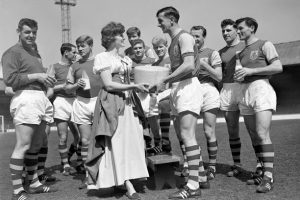 The 5th round saw Spurs continue scoring for fun. Two each from Bobby Smith and Jimmy Greaves lifting them to a 4-2 win against West Bromwich Albion at the Hawthorns. In front of over 52,000 fans at Turf Moor Burnley went a goal down to Everton when Bobby Collins scored but Miller, Connelly and Robson turned things around in the second half to send the home team through. This stage saw the demise of lower-league teams Port Vale and Norwich City who were eliminated by Fulham and Sheffield United respectively. 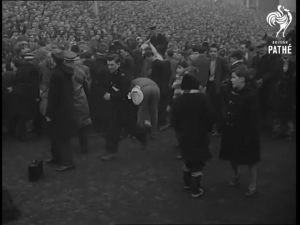 Chaos after the railings give way at Bramall Lane

This left Preston, who had overcome Liverpool in a second replay at Old Trafford thanks to a goal from future Reds star Peter Thompson, as the sole non-1st Division team in the quarter finals. But their run was stopped when Manchester United drew at Deepdale then came out on top in an Old Trafford replay. Burnley squeezed in front of 57,000 fans at Bramall Lane, the only goal coming when a shot from full-back Alex Elder was deflected past Alan Hodgkinson by Ray Pointer.. The game was interrupted when a 10-yard stretch of railing gave way causing injuries to over 50 fans (though none serious).

Spurs continued make smooth progress with a 2-0 home win over Aston Villa in front of 63,479 fans, with Danny Blanchflower and Cliff Jones providing the goals while Fulham progressed when they won a replay at Ewood Park thanks to a Maurice Cook goal after initially drawing 2-2 with Blackburn Rovers at Craven Cottage where Johnny Haynes equalised for the home team four minutes from time. 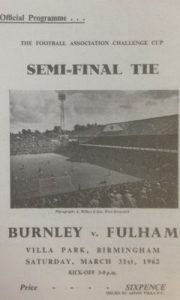 The semi-finals set up a pair of London v Lancashire matches. Burnley met Fulham in front of 68,000 at Villa Park and Graham Leggat’s early goal after being set up by Johnny Haynes for the Londoners was cancelled out by a John Connolly strike. The replay took place 10 days later at Filbert Street and a pair of Jimmy Robson goals set the Turf Moor club, inspired by Jimmy McIlroy, on their way to Wembley. Jim Langley’s goal for Fulham came in the 90th minute and was nothing more than a consolation as Harry Potts’ team continued their quest for the double. 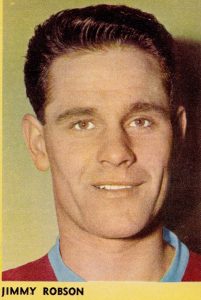 Robson was something of an ‘unsung hero’ in the Burnley line-up.  Born in County Durham, he joined the club in 1956 and by the time of the title win in 1959-60 he was a regular in the starting line-up, scoring 18 times in 38 games, including five in an 8-0 thrashing of Nottingham Forest.

Whilst the likes of Ray Pointer, John Connolly and Jimmy McIlroy received the plaudits (and international recognition) Robson would gain a solitary under-23 cap but he was an extremely important part of the side and he scored 79 goals in 202 league games (100 in all competitions). He was eventually displaced by the emergence of Andy Lochhead and left for Blackpool for £10,000 in 1965. He moved on to Barnsley and Bury and then returned to Burnley to play with the reserves before retiring in 1974. 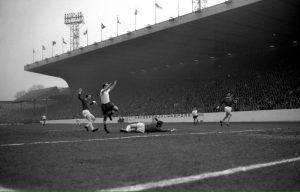 At Hillsborough, a crowd of 65,000 saw Jimmy Greaves give Spurs a 4th minute lead against Manchester United. The holders continued piling on the pressure and it came as no surprise when Cliff Jones headed John White’s cross home to double the advantage. David Herd gave United a glimmer of hope with a goal six minutes from time but Terry Medwin restored the two-goal advantage and Spurs held on comfortably. 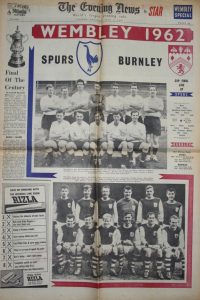 So, the final was to be competed for between the eventual 2nd and 3rd-placed teams in the title race. Burnley would go on to finish three points behind Ipswich with Spurs a point further back. The Turf Moor team had racked up a century of goals that season, thanks to an attack spearheaded by Robson, Connolly and Ray Pointer prompted by McIlroy. Spurs had their own super strike force. With Greaves and Smith ably supported by Jones, Medwin and the mercurial John White they had banged in 21 goals in their run to Wembley.

The match wa preceded by yet more protests over ticket allocations. Fans of the finalists were, as ever, disappointed that the F.A. continued to give tickets to County F.As meaning that less were distributed among supporters of the teams contesting the showpiece match. No change there then! 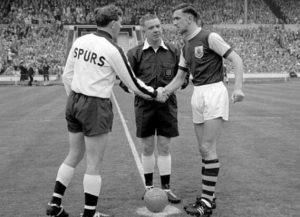 The Captains, Blanchflower and Adamson, meet

Spurs were led by the previous year’s Footballer of the Year Danny Blanchflower whilst skippering Burnley was Jimmy Adamson, the current incumbent of the title. 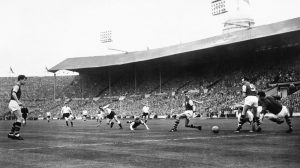 Spurs kicked-off and within four minutes were in front. Greaves seemed at first to have lost control of the ball inside the area. But he regained the ball and beat a couple of defenders before finding the far corner of Adam Blacklaw’s goal. There were a chances at either end during the first period but defences held firm although Burnley had a Robson effort ruled out for a very tight offside. But the Londoners went into the break with a slender one-goal advantage. 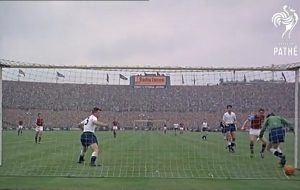 Within five minutes of the restart Burnley were level when a cross from Gordon Harris was turned home through Bill Brown’s legs by Robson. The goal was significant in that it was the 100th Cup final goal scored at Wembley.

No sooner had they got themselves level, the Lancastrians were behind again. John White’s cross was converted by Bobby Smith, scoring in a final for the second successive year. Burnley pressed hard for a second equaliser but the Tottenham defence held firm. 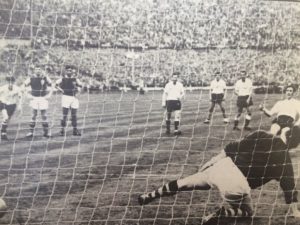 Blanchflower scores from the spot

With nine minutes left Medwin’s shot was handled on the line by Cummings. It had appeared that the linesman had flagged for a foul before the handball but referee Jim Finney ignored him and gave the spot kick. Blanchflower stepped up to send Blacklaw the wrong way and the cup was heading to North London for a second consecutive year. 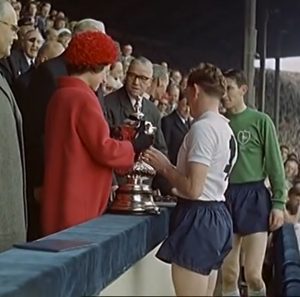 The Queen hands over the trophy

Danny Blanchflower collected the trophy from the Queen as Spurs became only the second team of the 20th century (after Newcastle) to retain the trophy. 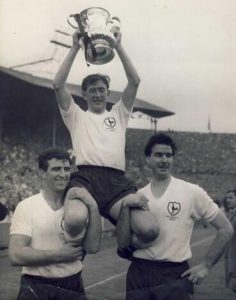 Blanchflower gets a lift from Smith and Norman

Some newspaper reports at the time expressed disappointment in the match dubbing it ‘The Chessboard Final’. In fact, there were more chances and more shots on target than in any final to date although the huge respect the previous two year’s champions held each other in perhaps led to a little less passion than Cup Finals were used to. 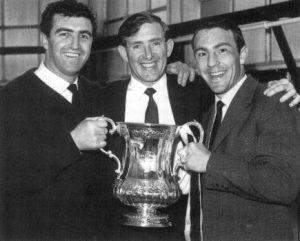 The win earned Spurs a place in the following year’s European Cup Winners Cup and they would go on to win the trophy becoming the first English club to capture a continental trophy. Meanwhile Burnley finished the season with the unwanted tag of ‘bridesmaids’ in both major competitions. 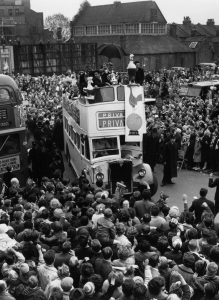 Both Spurs and Burnley would have further fine seasons the following year when the Londoners, as well as that European success finished as league runners-up behind Everton with Burnley a single point behind in third. 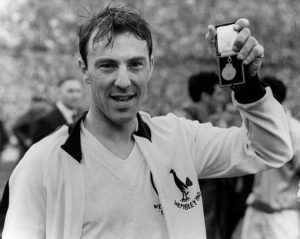 Greaves shows off his winners medal

For Greaves the goal, and winners medal came at the culmination of a tumultuous season.

He began the campaign with Milan having moved to Italy from Chelsea at the end of the previous campaign for £80,000. He had tried to get the deal called off after signing but the Italian club’s manager Giuseppe Viani insisted he join the club.

Despite scoring nine goals in 12 games for the ‘Rossoneri’ he found it impossible to settle in Italy and in December Milan decided to allow him to move back to England. Former club Chelsea and Spurs both bid £96,500 but Bill Nicholson then upped his bid to  £99,999. The fee was designed to relieve the player of the pressure of being the first £100,000 player.

Greaves scored a hat-trick against Blackpool on his Spurs debut and would net 12 goals in nine F.A. Cup games including the opener at Wembley. He finished the season as a cup winner in England and a league winner in Italy as Milan won the Serie A title.

Both sides would continue to be a 1st Division forced throughout the 1960s although perhaps not quite reaching the heights they had attained at the start of the decade.

Spurs have won the FA Cup four more times since the 1962 success whilst Burnley have not been back in the final of the country’s premier cup competition and, in fact, have to go back 104 years for the last time they won the trophy.

The early 1960s were clearly a ‘golden era’ for these two storied clubs. For Spurs, they have returned whilst the Turf Moor fans are still waiting.