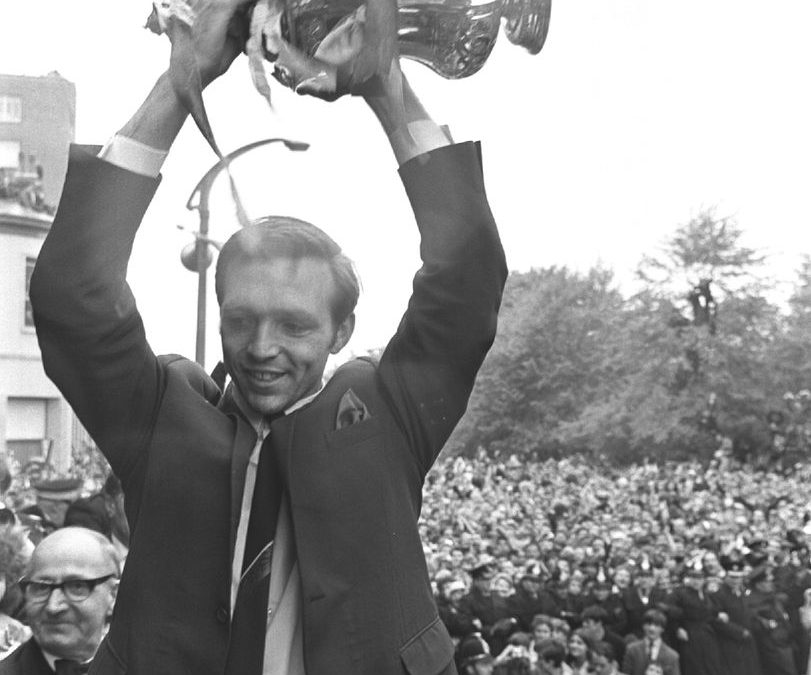 The 1967-68 season in English football was mostly dominated by the Manchester clubs. City took the title by two points from rivals United who won the European Cup and had, in George Best the joint top scorer (alongside Southampton’s Ron Davies) and winner of both the Football Writers Association and European Footballer of the Year awards.

In the 3rd Round perhaps the biggest shock was the home defeat suffered by Newcastle United who went down 1-0 to second division Carlisle United. A crowd of 56,569 showed up at St James’ Park to see the Tynesiders, who had been unbeaten at home all season, fall to a tenth-minute Tommy Murray header. 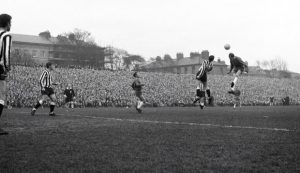 Another second tier team, Rotherham United, led by Tommy Docherty, got the better of top flight Wolverhampton Wanderers thanks to a goal from Jim Storrie, a losing finalist with Leeds in 1965. The Millers recorded another single goal win, again thanks to Storrie, in the next round against Aston Villa before falling to Leicester City in a 5th Round replay. 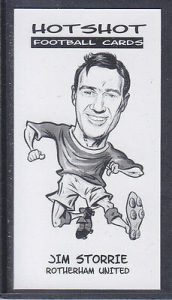 There were more shocks in the 4th Round as Portsmouth got the better of Fulham thanks to a goal from Mike Trebilcock, hero of Everton’s triumph in 1966, whilst Third Division strugglers Tranmere Rovers saw off top tier Coventry City with goals from George Yardley and George Hudson.

Birmingham City of the Second Division and with former Wolves manager Stan Cullis at the helm, saw off two top-flight London clubs in a row. In the 5th Round City, having already beaten Halifax Town and Orient, they drew at Highbury against Arsenal before a pair of goals from Barry Bridges, including a brilliant scissors-kick, proved too much for Bertie Mee’s men in the replay. The Gunners managed only one, from Bobby Gould, in reply. 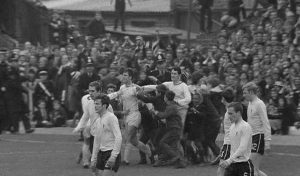 In the quarter-final City were given a home tie with Chelsea who had lost out to Tottenham Hotspur in the previous year’s final. A crowd of 51,576 saw Fred Pickering stoop to head home the only goal as the men from St Andrews marched on.

Next up for City was a semi-final at Villa Park against local rivals West Bromwich Albion. The men from The Hawthorns had kicked off their cup run with a 4-0 replay win over Colchester United after a Tony Brown penalty saved them at Layer Road. Another replay followed with a home 1-1 draw with Southampton sending Alan Ashman’s team to The Dell where they won 3-2. Another trip to the South coast followed and they saw off Portsmouth 2-1 at Fratton Park in front of over 45,000. Jeff Astle and Clive Clark put Albion two up but a Ray Hiron header set up an exciting finale with John Osborne needing to be at his best to hold Pompey at bay.

The quarter-final pitted Albion against Bill Shankly’s Liverpool and the two teams drew twice forcing a second replay at Maine Road where goals from Astle and Clark saw the Baggies progress with the three matches seen by over 163,000 fans.

At Villa Park, Astle gave Albion an early lead but they had to survive some City pressure before a Tony Brown goal clinched a place at Wembley for the men from The Hawthorns for what was then a record-setting 10th time.

At Wembley Albion’s opponents would be Everton. Wins at local rivals Southport, where Joe Royle headed the only goal, and Carlisle set up a home encounter with another local team, Tranmere Rovers.

Almost 62,000 crammed into Goodison Park and they saw Harry Catterick’s team comfortably progress to the quarter-final. Joe Royle and John Morrissey got the goals and Rovers had ‘keeper Jim Cumbes to thank for the victory margin not being more comprehensive as Everton made it to the last eight without conceding a goal.

The 6th Round clash with Leicester City at Filbert Street saw Gordon West finally concede but Everton scored three with Jimmy Husband grabbing a brace and Howard Kendall adding the other.

This meant a last-four clash with Leeds United, whom they had lost to twice in the league that season, at Old Trafford. With Alan Ball, absent this time, serving a suspension after being sent off at Newcastle in a league match, Leeds were regarded as clear favourites to make it to Wembley.

The match proved to be mostly dominated by defences and was eventually decided when, after Gary Sprake had misjudged a cross, Jack Charlton was forced to handle a goal bound Jimmy Husband shot. Morrissey slotted home the resulting penalty and, despite a Terry Cooper effort rattling the crossbar, the Toffees defence stood firm to send them to Wembley.

Catterick said after the semi that he felt Leeds, who would go on to play 61 matches in the season, ‘looked a tired side’, and his team deserved their win, especially as they were missing Ball and the injured pair of Sandy Brown and John Hurst.

With two league victories over Albion in the league during the season, including a 6-2 victory at The Hawthorns where Ball scored four times, Everton went into the final as clear favourites. Albion skipper Graham Williams decided to use reverse psychology regarding the pair of league defeats saying; “We’d keep reminding ourselves that it’s rare, very rare, that a team beats you three times in a season. 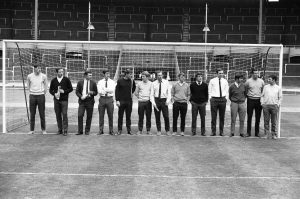 The Baggies at Wembley

Albion manager Alan Ashman had just one selection dilemma and he plumped for the defensively- minded Graham Levett on the right side of midfield. Just 18 months before Levett had suffered a broken neck in a road accident and had watched the previous year’s final from a hospital bed. 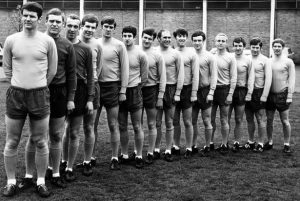 Catterick was still in the process of building an Everton team that would go on to be crowned Champions in 1969-70 and he had the ‘holy trinity’ of Howard Kendall, Colin Harvey and Ball at his disposal in midfield. 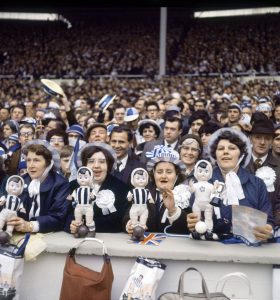 The previous week’s Rugby League Challenge Cup Final between Leeds and Wakefield Trinity, coupled with heavy overnight rain left the Wembley pitch heavy for the big game and it was a mostly dour affair.

Chances were few and far between with the best falling to Jimmy Husband close to the end of the 90 minutes but he shot wide with the goal at his mercy.

So the game moved into extra-time with Dennis Clarke replacing the injured John Kaye to become the first-ever cup final substitute. 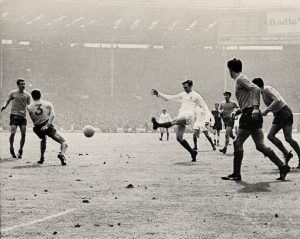 Three minutes into extra-time Jeff Astle collected the ball midway inside the Everton half and ran at goal. His initial right-footed shot was blocked but the ball rebounded back to the centre-forward and he rifled home with his left foot to give the Baggies the lead – and complete his record of scoring in every round of the competition.

From there on Albion held their lead somewhat comfortably and if anything, looked more likely of the two sides to score, especially when goalkeeper John Osborne set an attack in motion late on that ended with Lovett shooting wide. 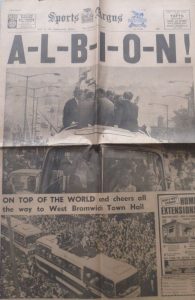 So Albion won the trophy for the fifth time, no doubt disappointing a watching Paul McCartney. They would go on to reach the quarter-final of the following season’s European Cup Winners Cup where they fell to Dunfermline Athletic. When they brought the Cup home that year few could have predicted that a team with such a storied history would fail to return to the big stage for 50 years and counting but since then – nothing. The closest Albion have come to another honour was the League Cup final in 1970, where they lost to Manchester City.

For Everton there have been three titles and two more F.A. Cup wins, along with victory in the 1985 European Cup Winner Cup Final so they have fared the better of the two. But on May 18 1968 was West Brom’s, and in particular, Jeff Astle’s day.