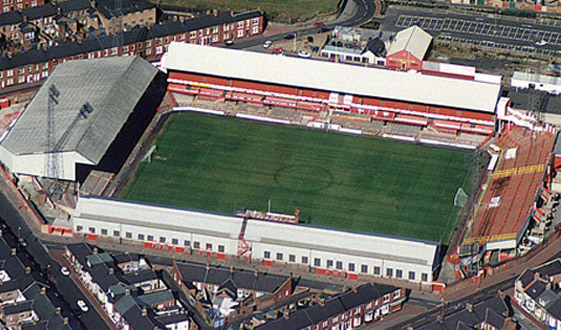 There is no doubt that Roker Park, home of Sunderland for just under 100 years, was one of the country’s major stadiums, and also one of the most atmospheric. It has also been home to some legendary players with the likes of Charles Buchan, Raich Carter and Len Shackleton having plied their trade there.

Having hosted a World Cup quarter-final, three England internationals, an FA Cup semi-final replay and two FA Amateur Cup Finals, the Stadium finally closed in 1997 after serving as home of the Black Cats for 99 years. 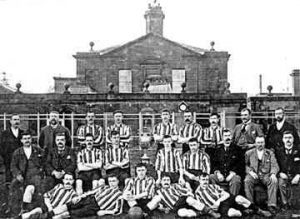 Founded in 1879 as Sunderland and District Teachers Association Football Club, they played at Blue House Field, The Grove, Horatio Street and Abbs Field before settling at Newcastle Road in time for their League debut in 1890. Whilst at the last-named that they won three First Division titles in four years, finishing runners-up in the other season and earning the label ‘The Team of all the Talents’ from Football League founder William McGregor. The team was led by prolific goalscorer John Campbell whose brother Robert was manager at the start of the glorious run.

Although Newcastle Road had managed to accommodate 21,000 for an FA Cup game against Everton in 1891 it was decided in the mid-1890s that a larger home was needed and the club bought farmland from a Mr Tennant. Part of the agreement was that the club would also build a house for the former owner and until this was completed they had to pay rent.

The new stadium was built quickly with construction of the stands taking a mere three months. The turf was imported from Ireland and such was its quality that it didn’t need re-laying until the late 1920s.

Within a year of the original land purchase the club had staged an ‘Olympic Games’ event and a game between the first team and the reserves. They then played their first game, a 1-0 win over Liverpool on 10 September 1898 with Scottish striker Jim Leslie scoring the first-ever goal. The opening ceremony was performed by Charles Vane-Tempest-Stewart, the 6th Marquess of Londonderry who turned a gold key in a locked gate leading onto the pitch.

Sunderland brought Championship success to their new home in both 1902 and 1913. On the negative side 1903 saw the club banned from using the ground due to crowd disorder and forced to play ‘home’ games at St James’ Park, home of local rivals Newcastle United. 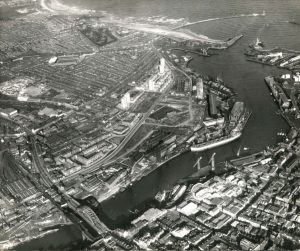 In 1908 the club finally bought the land the ground was built on and original wooden Roker End was concreted over in 1912 with capacity at that time around 50,000. Things remained pretty much the same until 1929 when the grandstand’s original wooden construction was torn down and replaced by a new Main Stand featuring the signature lattice work of famed architect Archibald Leitch. The work raised capacity again, this time to 60,000, but the cost almost forced the club into bankruptcy. 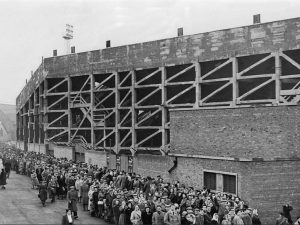 The financial woes were staved off and the 1930s brought a return to the good times. In 1933 a record crowd of 75,118 attended the FA Cup match with Derby County (not bad for a ground with an official capacity of 60,000!). Led by the brilliant Raich Carter, Sunderland took the First Division title in 1936 and followed it up with their first-ever FA Cup Final success, a 3-1 win over Preston North End in 1937. 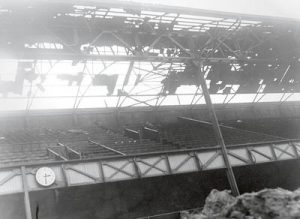 The stadium suffered bomb damage during World War Two but had recovered well enough that it was chosen as the venue for the 1950 Home International Championship match against Wales where goals by Eddie Baily (2), Jackie Milburn and Wilf Mannion saw England, captained by Alf Ramsey, run out 4-2 winners. This kept up England’s 100% record at the stadium following two victories over Ireland in 1899 and 1920.

There were also two FA Amateur Cup finals staged at the ground. The first of these was in 1926 and resulted in a 7-1 win for Manchester-based Northern Nomads over Stockton. Then in 1939 the local powerhouses of Bishop Auckland overcame another County Durham team, Willington, 3-0. This was the seventh of ten times Bishop Auckland won the trophy. 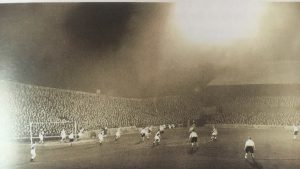 In 1952 the ground was fitted with temporary floodlights which were quickly made permanent with the first-ever match being a friendly against Dundee (above). 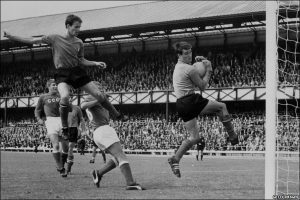 In 1966 extensive improvements, including seats in the Clock Stand, were carried out (with the help of grants and loans from the FA)  after Roker was chosen to host four matches at the World Cup including the quarter-final between the Soviet Union and Hungary which the Soviets won 2-1.

The only major success on the pitch came with a shock 1973 FA Cup Final win over hot favourites Leeds United and Roker, like many of the older stadia around the country, fell foul of the Taylor Report and the restrictions imposed. Capacity was reduced to 22,500 and it was clear then that the club would need to move if they wished to push attendances back up. In 1996 work began on the Stadium of Light.

The last league match to hear the famed ‘Roker Roar’ was a crucial relegation encounter where the ‘Black Cats’, inspired by Chris Waddle, ran out 3-0 winners over Everton to give them a chance of staying up. Sadly, defeat at Wimbledon the following weekend condemned Sunderland to the drop.

For the final match at the stadium Liverpool, the initial visitors 99 years before, returned for a friendly. Sunderland repeated the scoreline from the first-ever game, beating the visitors 1-0, and Roker closed its gates for the last time.

Roker was well-known for that famous ‘Roar’ for it’s intimidating atmosphere for visiting fans and players alike. Unsurprisingly, Sunderland have failed to replicate that on a regular basis at the Stadium of Light and have yet to build a fortress at their new home to compare to the one that served them for 99 years at their famous old home.