RENTON F.C. CHAMPIONS OF THE WORLD 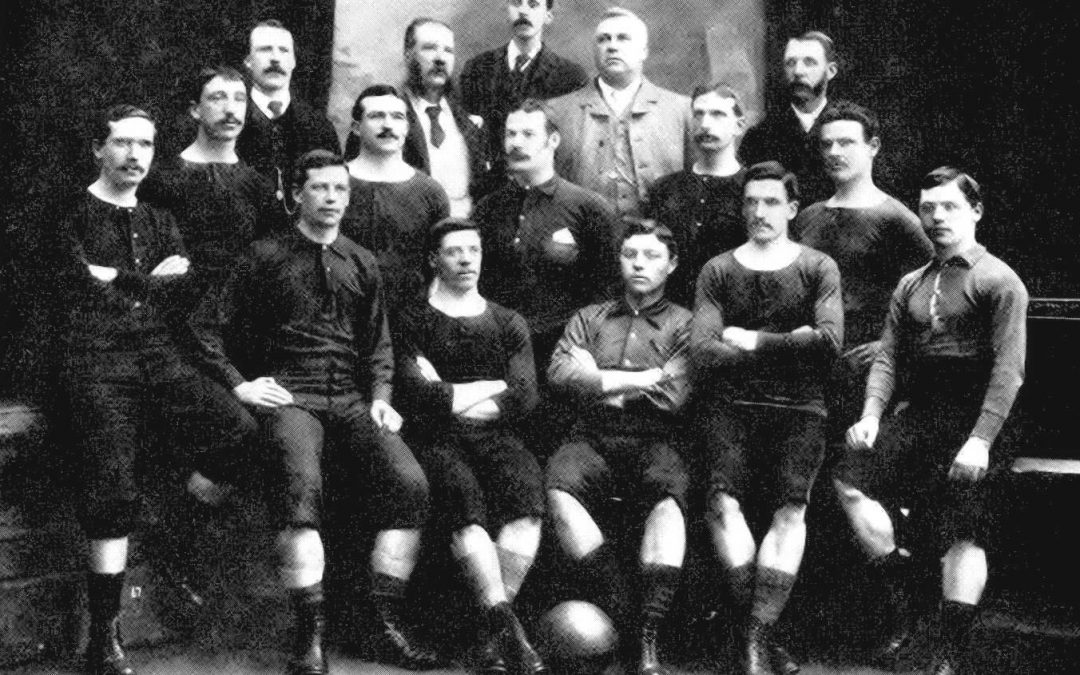 A team from a small village in West Dumbartonshire became the first World Champions, competed in the first Scottish Cup, won the trophy twice and produced 13 internationals in 11 years. Yet they were out of league football before the 20th century came around and out of existence in 1922. 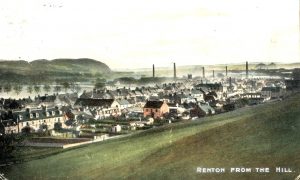 The village of Renton (above) situated in West Dumbartonshire in Scotland’s Central Lowlands has a population of a little over 2,000. But in the early days of Scottish football this area was a true hotbed of the game and in 1872 a football club was formed in the village.

A year after their formation the club joined the Scottish F.A. They competed in the inaugural Scottish Cup and had the distinction of playing in the first-ever match in the tournament, beating Kilmarnock 2-0 on neutral territory at Crosshill, Glasgow. Within three years the team had reached the final, having seen off local rivals Dumbarton in the semis after a replay. In the final at Hampden they lost out to Queens Park, suffering a 3-0 defeat.

It was another local team, Vale of Leven, who were the first from the area to capture the trophy when they came out on top in 1877 with a 3-2 victory over Rangers in the final, the first of three successive wins. Five years later another local team, Dumbarton, won the cup with Vale of Leven the beaten finalists this time as the region continued to dominate Scottish football. In the same year Renton were eliminated from the tournament after failing to put out a team in the 1st Round.

After playing in a local field for the first five years of their existence the team moved into their home, an enclosed ground at Tontine Park in 1878. When they first started playing there the players had a 100-yard walk to reach the pitch but a pavilion was built in 1886 and the pitch was enclosed with a grandstand built soon after. 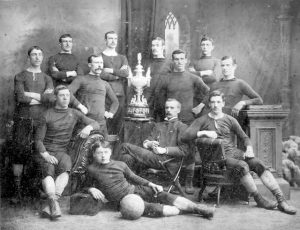 In 1884-85 it was Renton’s (pictured above with the Glasgow Charity Cup which they won four times) turn to take the trophy. Wins over Rangers in the last eight and Hibernian in the semi-final set up a final against Vale of Leven. The first meeting finished in a goalless draw and Renton overcame their local rivals 3-1 in a replay.

They reached the final again in the following season but were beaten by Queens Park and two years later they made it for a third time.

Wins over Union, Dumbarton Athletic, Camelon, Lindertis Kirriemuir (who they thrashed 13-1), St Mirren, Dundee Wanderers and Queens Park to set up an 1888 final encounter against Cambuslang who they hammered 6-1 to claim the trophy a record win which stands to this day.

During this time the club also entered the English F.A. Cup and in the 1886-87 competition they recorded a 1-0 home win over Accrington in the first round then overcame holders Blackburn Rovers. After a 2-2 draw at Tonitine Park they travelled to Ewood Park and recorded an upset 2-0 success before the run came to an end when they fell 2-0 to eventual semi-finalists Preston North End.

The Scottish Cup win saw an invitation to play English F.A. Cup winners West Bromwich Albion in a match which was billed as for ‘The Championship of Great Britain and the World’. The contest was played before the formation of either the Scottish or English leagues so the two sides were recognised at the best in their respective countries.

On Saturday 19 May 1888 the teams met at Hampden Park. Conditions were awful with the match played in the middle of a thunderstorm. Play was stopped twice due to the torrential rain but it was Renton, considered the clear underdogs, who ran out convincing 4-1 winners.

Bonfires were lit on the hills to welcome the ‘World Champions’ home and celebrations were, understandably, long. 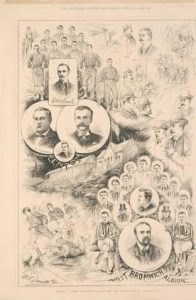 The Illustrated Sporting and Dramatic News

But the success had its drawbacks. The win alerted clubs from both Scotland and England to the talent at Renton and a number of players took up invitations to play elsewhere.

In 1890 Renton were among the main movers behind the creation of the Scottish League with club secretary Peter Fairly a  chief instigator. But a month after the debut season started the club were unceremoniously thrown out of the competition after they had played an unsanctioned friendly against a team called ‘Edinburgh Saints’ who were, in fact, St Bernard’s who had already been thrown out due to allegations of professionalism.

After successfully suing the Scottish League, the club rejoined in the following year and finished in mid-table some way behind champions and neighbours, Dumbarton.

They barely staved off the threat of re-election in the following campaign and then, in 1893-94, when professionalism arrived in Scottish football leading to a further exodus of players to big city clubs, they amassed a paltry four points well adrift at the bottom and were relegated to the 2nd Division.

Despite another run to the Scottish Cup final in 1895 where they lost 3-1 to St Bernard’s in the final, players continued to move on to greener pastures and the club further incurred the wrath of the authorities when they failed to turn up for a league match, instead taking part in a more lucrative friendly.

The tiny crowds who attended home matches had Renton considering a move to Glasgow before, four matches into the 1897-98 season and unable to meet their financial obligations the club resigned from the league with their remaining fixtures taken over by Hamilton Academical.

After this the club competed, along with local rivals Vale of Leven, in the Western League. They had a further brief brush with glory in the 1906-07 season when they put Dundee, who would go on to finished runners-up in the title race, out of the Scottish Cup but there was little improvement in terms of crowds and status and in 1922-23, after failing to turn up for a Scottish Cup tie, Renton folded.

Striker Alexander Barbour who left the club for Bolton Wanderers in 1888 before going on to play for a Glossop North End and Nottingham Forest.

Henry Campbell, an inside forward, moved to Blackburn Rovers in 1889 where he made almost 100 appearances, representing his country once..

Full back Robert Glen left Renton twice. In 1893 he moved south, joining Sheffield Wednesday, but he returned later that year and spent another four years at the club before joining Rangers, then moving on to Hibernian.

Robert Hannah outdid Glen with three spells at Tontine Park. After impressing in the big win over West Brom he signed for the English club. He found life difficult at Stoney Lane and returned to Renton before the year was out.

The full back, then joined Everton where he won a league championship medal in 1890-91 before again returning to Renton. Next he went to Liverpool, reuniting with former Everton manager William Barclay.

Hannah played in Liverpool’s first-ever league match and won the 2nd Division title with the club also earning the distinction of being the first man to captain both of the Merseyside teams. He returned to Scotland in 1895, signing for Rob Roy.

Leitch Keir spent time with local rivals Dumbarton, where he won two titles. as well as at Renton and appeared five times for his country. 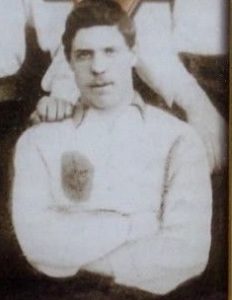 James Kelly (above) is undoubtedly one of Renton’s first heroes. He went on to become one of Celtic’s.

Born in Renton, Kelly played key roles in the two Scottish Cup wins and the victory over West Brom and was regarded as one of the country’s finest players.

In 1888 he moved to Celtic, choosing the Glasgow club (where his father-in-law was a Director) over Hibernian who were also keen on his signature.

Kelly was Celtic’s first-ever captain and he scored in their first match, a 5-1 win over a Rangers reserve side. After retiring Kelly immediately became a Director of the Glasgow club who he would later serve as Chairman as well as being a major shareholder.

Bob Kelso, another member of the ‘World Champion’ team, represented his country seven times and enjoyed a fine career south of the border with Newcastle West End, Everton (where he won the cup and Preston North End (where he won the league) before returning to Scotland and joining Dundee.

Goalkeeper John Lindsay, who won three caps for his country, left Renton for Accrington in 1889 and spent four years with the Lancashire club before returning to play for his home town team again.

Both Archie and James McCall spent their careers with Renton and both represented their country, Archie just once and James five times, scoring two goals. 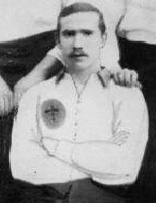 Outside-right Neil McCallum (above) also played in the win over West Brom (he was just 19 at the time) and left soon after, like Kelly moving to Celtic.

McCallum holds the distinction of being Celtic’s first-ever goalscorer and after leaving the Glasgow club he played for Blackburn Rovers, Nottingham Forest, Notts County and Heanor Town before rejoining Celtic. Denis McCallum, Neil’s grandson, would also go on to play for Celtic.

William McColl is a rarity in this group as he began his career not at Tontine Park but at Vale of Leven and moved south to play for Ardwick, Accrington and Burnley before returning to Scotland and signing for Renton. He won a solitary Scottish cap.

John Murray was a member of the Renton side that lost to St Bernard’s in the 1895 Scottish Cup final and played once for Scotland before leaving his home town club to join Dundee. 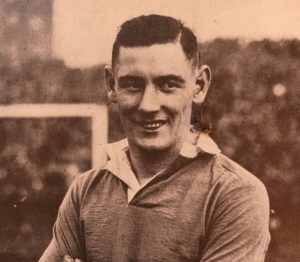 Even after the football club ceased to exist, Renton continued to produce fine footballers. Outstanding among these was Alex Jackson (above) who first played for Renton Victoria before moving to Dumbarton (who signed him in return for a ball).

Jackson would go on to play for Aberdeen, Huddersfield Town and Chelsea and was a key member of the famous Wembley Wizards, scoring a hat-trick against England at Wembley. 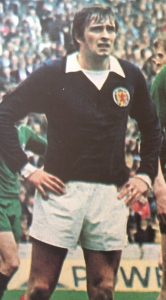 In more recent times, Renton-born John O’Hare (above) was an outstanding performer at Derby County and Nottingham Forest – where he collected a European Cup winners medal – who made 13 appearances for Scotland scoring five times.

So clearly, the knack of producing great players is still there in Renton. And it is, and will always be, a small town in West Dumbartonshire that no longer has a football team but that can lay a legitimate claim to being the home of the first British, European and World Champions.