Trevor Ford’s reign as Britain’s most expensive player stood for almost six months. Then, in March 1951, Sheffield Wednesday bettered it by £4,500 stumping up £34,500 for Notts County’s Jackie Sewell.

Sewell was born in 1927 in Whitehaven, Cumbria and when he left school he became a milkman. He quit the milk round to work as a miner as this left him free at weekends to play football for the Kelis Centre Miners Club. It was whilst playing for them in a Cumberland League match against Workington that he was spotted by Notts County and offered a trial.

When first signing for County, Sewell continued working in the mines and would leave his job at 5pm on a Friday, arriving at his digs in Nottingham at 1 in the morning before getting up to play on the Saturday.

He learned his trade under Buckley but by 1946-47, when he became a regular in the first team the manager had been replaced by Arthur Stollery. Undaunted, he scored 21 goals in 37 Third Division (South) games that season.

The following year, the incisive though sometimes unpredictable inside-forward was joined in the line-up by British record signing Tommy Lawton and the pair carved up the Third Division defences.

In the 1949-50 season Sewell scored 19 times in 32 games as County romped to the Third Division (South) title.  The improved opposition the following season did little to slow Sewell down and he scored 14 in 26 when Wednesday, fighting against relegation from the top flight came in with the record-breaking offer.

Sewell admitted he would have been happy to stay put but County couldn’t turn down what was not just a British but a World Record offer.

The deal, agreed and signed in the Victoria Hotel Nottingham just three hours before the transfer window closed, whilst just another in the line of record transfers, was even more significant at the time it was made.

‘Worth his weight in gold’

With gold at £12.8.0 a per troy ounce, 12 troy ounces to the pound and the player weighing 12 stone it was calculated that Sewell was, officially, ‘worth his weight in gold’.

Sewell sought out Lawton to ask his advice on how to deal with such a price-tag. The blunt Lancastrian merely said; ‘Don’t worry about it’.

He scored on his debut and managed 6 goals in the final 10 games of the season but it wasn’t enough to keep his new team in the First Division, by the smallest of margins in perhaps the most gripping relegation battle ever.

The final day of the season came with Sheffield Wednesday and Chelsea locked together at the bottom on 30 points just two behind Everton.

Everton visited Hillsborough and Wednesday delivered a 6-0 thrashing to move above them on goal average. Then the news came through from Stamford Bridge that Chelsea had beaten Bolton Wanderers 4-0. The slide rules came out and determined that Chelsea, had a 0.44% better goal average than Sewell’s team so it was they who survived.

In the 1951-52 season Wednesday had the prolific Derek Dooley leading the line with Sewell as his able accomplice. These two led the team to a fabulous tally of exactly 100 goals and assured them of the Second Division title and a quick return to the top flight.

Sewell’s form earned him a call-up to the England team. He had already been on an F.A. tour of Canada in 1950 and he made his full debut for his country in the 2-0 win over Ireland at Villa Park in November 1951.

Both goals that day were scored by Nat Lofthouse who was a huge admirer of his international team mate. “His value was never really appreciated”, Lofthouse would say later. “We hit it off because we were totally different.

“I couldn’t play but I could shoot and head. Jackie could play. He had great skill, positional sense and an ability to spot an opening”.

Sewell scored in his next two starts for his country, wins in Austria and Switzerland on the. 1952 summer tour but his last goal for his country came on one of it’s darker days, with the last start coming on another.

Sewell equalises for England against Hungary. It was all downhill from there

The goal made the score 1-1 against Hungary at Wembley in 1953. He would later remember that “it was the only chance I had all afternoon”, as the Hungarians ran riot, beating their hosts 6-3.

The following Summer, England travelled to Hungary seeking revenge. What they got, in the Nepstadion Budapest was even more of a football lesson than at Wembley as they were handed a 7-1 thrashing. And there ended Sewell’s international career after six games and three goals.

He carried on scoring for Wednesday, helping them to an F.A. Cup semi-final in 1954, although 14 games in 35 games in 1954-55 couldn’t save a now Dooley-less team from another relegation.

In 1955-56 he against scored on a regular basis. He scored 13 goals in 16 games and Wednesday were promoted again. But by the time they were back in the First Division, Sewell was at Villa Park  having been sold to Aston Villa in December 1955 for £20,000. He met his new teammate an hour before playing, and scoring, in a 2-0 win over Sheffield United.

Sewell would go on to spend four seasons at Villa Park and it was while there that he finally won a major honour.

In 1956-57 Villa, managed by Sewell’s former teammate and manager at Notts County Eddie Houghton,  finished in the middle of the pack in the top flight with a middling points total – 43 points in 42 games. The F.A. Cup however, was a different story. They needed a replay to get past Luton Town in the 3rd round but then saw off Middlesbrough and Bristol City before needing two goes to see off Burnley in the quarter-final. The semi-final again went to a replay. They drew 2-2 with Midland rivals West Bromwich Albion at Molineux, before seeing off the Throstles 1-0 at the second time of asking at St Andrews. Over 113,000 fans watched the two matches.

They might have been hoping for a derby final but Birmingham City were seen off by Manchester United in the other semi.

United had waltzed to the league title that season and the ‘Busby Babes’ were red-hot favourites to complete the double.

Everything changed after a 6th minute collision between Villa’s Peter McParland and Ray Wood left the Manchester United goalkeeper unconscious and with a broken cheekbone. Right-half Jackie Blanchflower took over in goal until a patched-up Wood went back between the posts for the last seven minutes having originally come back as an outfield player – and virtual passenger.

United had held on bravely until goals from McParland in the 68th and 73rd minutes left Villa looking well on the way to their 7th F.A. Cup. Tommy Taylor pulled one back with seven minutes remaining but Villa held on to take the trophy in a somewhat bittersweet manner.

Sewell remained at Villa Park for another two years before moving to Hull City before he moved to Northern Rhodesia in 1961 and became player-coach for the City of Lusaka team. He also coached teams in Rhodesia and the Belgian Congo before making a surprise return to international football – as a player. 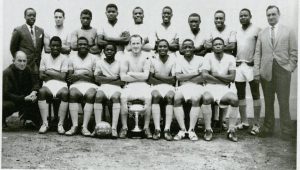 In 1964 Northern Rhodesia became Zambia won its independence from Britain. Sewell was given the chance to play for the country and made his debut for them in 1964, aged 37. He would go on to make 10 appearances for his ‘new country’ scoring seven goals and becoming one of the few who played international football for two different countries.

When he finally retired, Sewell returned to Nottingham, lived in the city and was a regular at County matches. He passed away in 2016 aged 87.