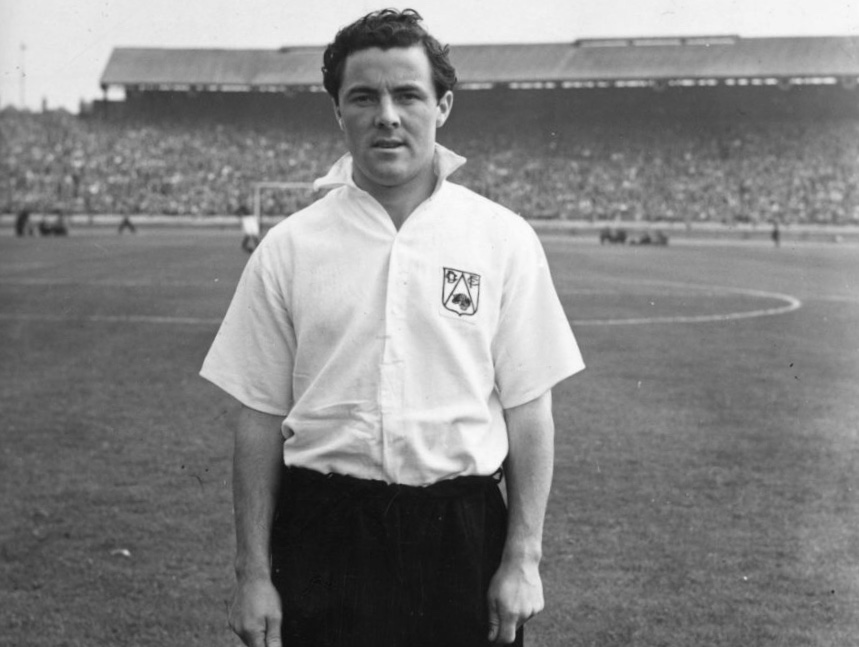 JOHNNY MORRIS who was described as a ‘quick clever robust little inside-right’ was spotted by Manchester United playing Sunday league football. They inked the Radcliffe, Lancashire native as a 16-year-old trainee in 1939 and he signed pro forms two years later.

Morris, born in 1923, made his debut during the 2nd World War and also guested for Bolton Wanderers, where he came to prominence, Charlton Athletic, Wrexham and Everton.

Football activities came to an end when he was posted overseas with the Royal Armoured Corps’ tank regiment and was one of the first to cross the Rhine as the Allies closed in on victory.

He finally made his official debut for United in October 1946 and quickly established himself as a regular in the team, going on to make 92 appearances for the Old Trafford team, scoring 35 goals. 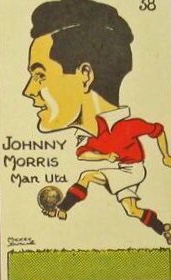 Although he was only 5ft 7in, Morris was tough and never shirked a physical challenge. He was often called ‘fiery’ and was equallly adept at breaking up attacks as he was at starting them. The one occasional knock on him was a lack of stamina with one opponent saying; ‘I don’t mind playing against him, he only plays for 20 minutes’.

Morris was part of an impressive first United team built by Matt Busby. He was a key member of a forward line that also included Stan Pearson, Jack Rowley, Jimmy Delaney and Charlie Mitten.

The United team of the time was full of attacking intent with Morris at the fulcrum of most of it. They were daring in their style and were Firet Division runners-up three times in succession after the war, finishing behind first Liverpool, then Arsenal and then Portsmouth. This was done while using Maine Road as their home ground while they waited for Old Trafford to be repaired after twice suffering bomb damage while being used as a military depot.

In 1948 United overcame Aston Villa (6-4 at Villa Park), Liverpool, Charlton Athletic, Preston North End and Morris’s future team Derby County to reach the F.A. Cup final. In the 3rd Round clash with Villa, United were a goal down within seconds but then scored fives times without reply, including a pair of Morris headers. Their opponents rallied to close the gap to 5-4 before a Pearson goal settled it. 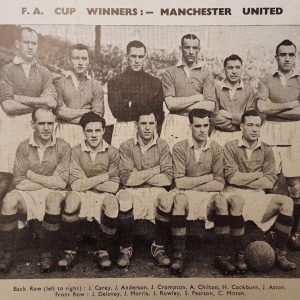 United met Blackpool and Stanley Matthews in the final and fell behind to a 12th minute penalty from Eddie Shimwell. After  Rowley had equalised, they fell  behind again when Stan Mortensen scored. However, skipper Johnny Carey told his men to keep their heads and keep playing football and in the last 20 minutes Morris played a leading role. He had a big hand as goals from Rowley again, Pearson and John Anderson saw Busby’s team take the trophy.

At 24 he should have been approaching his peak but early in the following season Morris fell out with Busby and the Old Trafford hierarchy and in February 1949 he was shipped off to Derby County for £23,850.

The problem came when Morris, always a champion of players’ rights, asked for the benefit he felt entitled to. The club, in a poor financial position due to not being able to play their home games at home for eight years, refused and the player then asked for a transfer. Busby’s immediate response was an abrupt; ‘while I am here you will never leave this club’.

Morris devised a way out. After winning the yearly golf tournament for players and staff, he asked for his cards claiming he intended to make a living as a professional golfer. The threat to leave the game, and cost United any hope of a transfer fee, was enough to make them cave and sell the player. 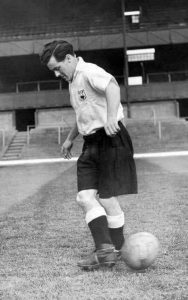 Morris got off to a flyer at the Baseball Ground, scoring 13 times in his first 13 games and the pairing of him and former transfer-record holder Billy Steel seemed set to take Derby right back to the top. In the summer of 1949 he was chosen for England’s summer tour. He first played in the ‘A’ team, scoring as they beat Finland 4-0 and then made scoring scoring starts for the full team against Norway and against France where he grabbed a brace.

The third cap came as a member of the side that became the first England team to lose to a foreign country on home soil when the Republic of Ireland, led by his former captain at United Johnny Carey ran out 2-0 victors at Goodison Park. With competition for his position from the likes of Mortensen and Wilf Mannion he was never chosen for his country again.

Whilst playing for Derby against Arsenal in 1949, Morris collapsed on the pitch and was rushed to hospital where he was found to be suffering from appendicitis. He underwent a successful operation the following day and was back in the team in a matter of weeks. 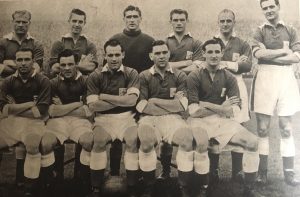 He spent three and a half seasons at the Baseball Ground and seemed as good as ever without having the same quality around him once Steel returned to Scotland and joined Dundee. Then he moved on again. After it was rumoured that he was about to be swapped for Harold Hassall of Bolton Wanderers, he joined Leicester City for £20,000 where he was converted into a right-half.

Morris would win a pair of 2nd Division titles at Leicester and then in the late 1950s he dropped out of league football, becoming Player-manager at Corby Town then working at Kettering, Oswestry Town and Great Harwood before leaving the game to become a full time tyre salesman, a job he had done on a part-time basis whilst plying his trade in non-league.

He continued to attend functions for former Derby County players for some time  but eventually passed away in a Manchester nursing home in 2011 aged 87.