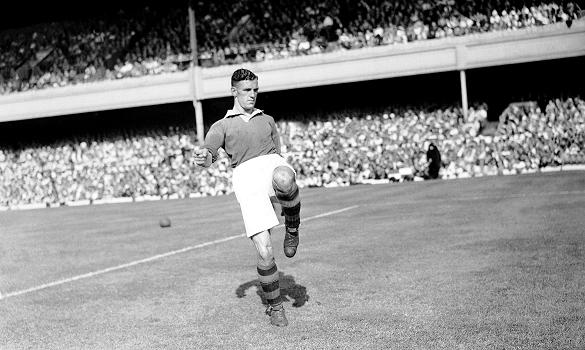 To have one brother in the family who scores over 200 league goals – despite missing 6 prime-career seasons due to the outbreak of war – is quite something. For the Rowley family however, one was not enough.

After hanging up his boots at Plymouth Argyle in 1957, Jack Rowley could look back on a career that brought him 208 goals in 458 league appearances across his three clubs. Along with that he scored six times in six games for England, and a solitary England ‘B’ appearance brought a hat-trick. A fine record in a career that spanned 20 years and would have been even better but for the intervention of World War Two also included Championship and FA Cup winners’ medals.

And yet though Jack might have been one of the most prolific scorers in football, he didn’t even have the best scoring record in his family.

That’s because younger brother Arthur scored an amazing 434 goals, still (and likely to always be) the record for most goals in the history of English league football.

Elder brother Jack was born in Wolverhampton in 1920 and began his career in local football with Cradley Heath. After failing to make the grade at local team Wolves he was snapped up by Bournemouth for whom he scored 10 goals in his first 11 games.

Rowley continued banging in goals on the South coast and quickly came to the attention of bigger clubs. It was Manchester United who moved first, bringing him to Old Trafford for the healthy fee of £3,000 in 1937.

Put on the left wing by manager Scott Duncan he was instrumental in helping United regain their place in the 1st Division before the outbreak of World War Two brought things to a temporary halt.

During the war, Rowley served in the South Staffordshire Regiment and landed in Normandy shortly after D-day. He also guested for a number of clubs including Spurs for whom he played the entire 1943-44 season, finishing top scorer with better than a goal-a-game as the Londoners won the Football League South title. He also won his first cap when chosen to play against Wales in a wartime international.

After the war Rowley returned to United and continued his goalscoring ways. But it took the arrival of Matt Busby as manager to move the striker with a shot so lethal he was nicknamed ‘Gunner’, to the next level. Despite the nickname, opponent Frank Swift claimed ‘It is the unexpectedness rather than the strength which makes his shooting so dangerous’.

Busby converted the striker to the centre forward role. In 1946-47, Busby’s first full season, Rowley tallied 26 goals in 37 games as United finished runners-up for the 1st Division title to Liverpool and from then on he regularly racked up 20+ goals per season

Rowley earned an FA Cup winners medal in 1948, scoring twice in the 4-2 win over Blackpool and tallied 30 goals in 40 games in 1951-52 when United won the first division title. Included in that total was a hat-trick in the 6-1 win over Arsenal at Old Trafford that clinched the title.

The forward stayed at Old Trafford until 1955 and finished with 182 goals in 380 league games with over 200 overall. He is one of four players to have reached a double century of goals for the club having since been joined since by Bobby Charlton, Denis Law and Wayne Rooney. That total came with six productive years taken away so his tally could potentially have been much higher.

Busby urged him to stay at the club to help bring his young generation of stars through. Instead he moved to Plymouth Argyle were he combined 14 goals in his 56 league games with managing the West Country club, scoring in his last two games before hanging up his boots and focusing on the managerial role, a post he held for five years.

In 1959 he led Plymouth to the 3rd Division title but a struggle in the second tier the following year led to his sacking, something he found out about in the local paper!

Jack then spent three years at Oldham Athletic before he took up the offer to coach Ajax. A solitary year in Holland produced a 5th place finish and a place in the cup semi-final before he was replaced by fellow Englishman Vic Buckingham. After a four-year break he was tempted back into management by Wrexham but his spell there was not successful and n either were brief stays at Bradford and back at Oldham.

Brother Arthur, christened ‘George Arthur Rowley Jr’ was born in 1926, six years after Jack, and was therefore just 19 and embarking on his pro career as the War was coming to an end.

During hostilities, Arthur moved to Manchester to work alongside his brother in a sheet metal factory and he signed as an amateur for United just after his 15th birthday. He actually lined up for the United team alongside Jack at just 15 years and 5 days.

Arthur made just a handful of appearances for the club before being released and then spent some time playing as an amateur for Wolverhampton Wanderers but his first pro contract was with signed with West Bromwich Albion in 1944. He spent parts of three seasons at The Hawthorns and four goals in 24 games gave little indication of what was to come.

Fulham manager Frank Osborne, a director of the club who took over when Jack Peart died of a heat attack, brought Rowley to London in a straight swap for winger Ernie Shepherd. He immediately showed his goalscoring qualities, using his thunderous left foot to score 19 times in 22 appearances and help his new club to the 2nd Division title. But he struggled for goals when moving to the top flight managing just 8 in 34.

At this stage Fulham decided, somewhat rashly that Arthur couldn’t cut it at the highest level and moved him on to Leicester City. At Filbert Street he was replacing the popular Jack Lee who had been sold to Derby County. The fans took a while to warm to Arthur but, switched from centre-forward to inside-left by manager Norman Bullock, his goals quickly won them around. 28 goals in his first season were followed by a club-record breaking 38 in 42 matches in 1951-52. The following year he broke his own record by one and continued to rattle them in, eventually breaking the record for a third time in 1956-57 where he managed a fantastic 44 goals in 42 matches, powering the Foxes to the 2nd Division crown for the second time during his time there.

Overall, Arthur, known like his brother as ‘Gunner’ scored a mightily impressive 265 goals in 321 games during his time at Filbert Street but in 1958 he left the then Division One club to take the reins as player-manager at 4th Division Shrewsbury Town.

The drop down the divisions saw Rowley continue banging in the goals, despite the added responsibility of management. In his first season he scored 38 goals in 43 games leading the team to promotion and finishing as the division’s top scorer. In four more seasons he added an impressive 107 goals and he finished with 152 goals in 236 games for the Shropshire club and was named as the club’s ‘Player of the Century’.

Arthur finally hung up his boots in 1965 but he carried on as manager at Shrewsbury before moving on to Sheffield United where he had a short unsuccessful spell as joint manager with John Harris and then Southend United where he enjoyed a happy six-season spell. Dropping down to non-league football with Knighton and Oswestry Town he continued in the game until finally retiring in the late 1980s.

Jack, after suffering from Alzheimer’s Disease for a number of years, passed away in 1998 and it is a sign of the esteem he was held in at Manchester United that then-boss Sir Alex Ferguson returned from World Cup commentating duties to attend the funeral.

Arthur lived in Shrewsbury and continued to attend matches at Gay Meadow until he passed away four years after his brother, in 2002.

Between them, the Rowley brothers tallied well over 600 Football League goals, and quite incredibly both reached the 200-goal milestone on the same afternoon. On 22 October 1955 Arthur scored for Leicester City at Fulham to reach the 200 milestone. A mere eight minutes later Jack, playing for Plymouth against Barnsley, recorded his own double century.

That 600+ total would surely have been amount even greater had Jack not missed those five War years and that we will never see their like again is undoubted. This is one goalscoring record that will stand the test of time.