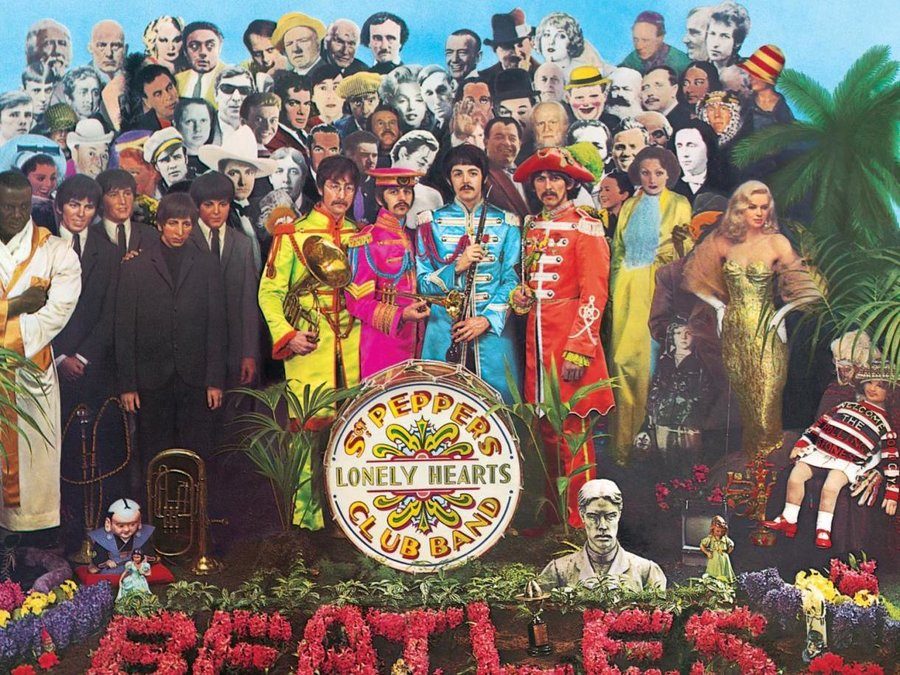 THE cover of The Beatles’ Sergeant Pepper’s Lonely Hearts Club Band album gave lots of fun for those looking to spot which famous personalities had made the ‘cut’. The likes of Karl Marx, Bob Dylan, Laurel & Hardy and Marilyn Monroe were included in the 70 featured and there were also some lesser-known faces. From the sporting world boxer Sonny Liston is easy to identify, swimming star and Tarzan man Johnny Weissmuller perhaps less so. And then there is the footballer.

Released in the year after England’s World Cup win you might have expected Bobby Moore, Geoff Hurst or maybe even Eusebio or Pele, the biggest names in world football at the time, to figure on the cover of the world’s biggest band’s latest masterpiece. Instead it was Albert Stubbins who featured as the sole representative of the Beautiful Game, his smiling face peeking out from behind Marlene Dietrich, and he surely would have caught out many trying to name them all.

A Liverpool great from the post-war era, Stubbins was, apparently, a John Lennon choice for the cover although none of the Fab Four can be said to have been massive football fans. In fact Lennon’s reason for choosing him for the cover was said to be that the name had amused him as a child.

Born in Wallsend on Tyneside in 1919, Stubbins spent part of his childhood in the United States but his family returned home and he first signed amateur forms for Sunderland although only on the understanding that if Newcastle wanted him he would be allowed to make the switch. The Geordies duly made their move and he made his.

The well-built striker had his initial taste of first team action in 1937 and he was just getting into his stride for Toon when World War Two broke out. 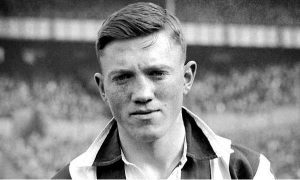 Stubbins was a prolific scorer in War-time football, although sadly the almost 200 goals he got in that period don’t count towards official records. Maintaining his ‘other’ job as a draughtsman he turned out regularly for his club and such was his form that he was chosen for England in the 1945 Victory International against Wales at The Hawthorns .

The Welsh recorded a shock 1-0 victory that day. Stubbins was never picked for his country again and with the match not classified as a full international this meant he never won an official cap.

In the first season after the war, and before the Football League resumed activities, The centre-forward scored 39 times for Newcastle in the Northern League. By this time the club had another promising forward emerging in a certain Jackie Milburn and it might well have been to the benefit of all when Stubbins asked for a transfer.

Newcastle made their star man available and no fewer than 18 clubs registered an interest. The top two suitors, Liverpool and Everton, both had bids of around £12,500 accepted. And the story of how Stubbins made his choice between the two deserves retelling.

“Both teams [Liverpool and Everton] wanted to talk to me and it was a very difficult decision to make,” recalled Albert. “During the War we had a few guest players from Liverpool at Newcastle and so I suppose I always had a slight inclination towards Liverpool.

“Everton though were also a famous team at the time and were known as “The team of talents”.”

Albert was enjoying a night out at the cinema when a notice appeared on the screen. ‘Would Albert Stubbins please report to St James’ Park’.

When he arrived at the stadium representatives of both clubs were present and Newcastle director Stan Seymour asked who he would like to see first. ‘’I said let’s flip a coin, ‘Heads Liverpool. Tails Everton.’ It came down heads – Liverpool.

“Bill McConnell, the Liverpool chairman and George Kay [the manager] and myself discussed matters and I was impressed with them both, and with the possibilities of Liverpool, so I agreed to go to Anfield.

“In the end I never spoke to Everton because I had been so impressed with Liverpool’s offer”. 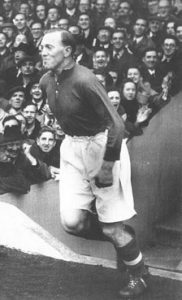 It Was 70(ish) Years Ago Today

The new man settled in quickly at Anfield. He formed an excellent partnership with Jack Balmer, the pair finishing joint-top scorers in the league in the 1946-47 season with 24 goals apiece.

With further support from Billy Liddell, Bob Paisley and others the Reds sneaked to the first post-war title that season coming out on top in a tight, thrilling race where they, Manchester United, Wolverhampton Wanderers and Stoke City were separated by a mere two points.

After another fine season where he scored 26 goals, things suddenly seemed to go wrong. At one stage he asked Liverpool for a transfer but was refused. He helped them to the 1950 FA Cup Final but played with an injury and his team lost to Arsenal and in a further five seasons at Anfield, managed just 27 goals after scoring 50 in his first two.

He did get a second chance at representative football in 1950 when chosen to play for the Football League against the Irish League at Bloomfield Road and certainly didn’t let the side down, scoring five times in a 6-3 win.

Thereafter injuries took their toll. He left Liverpool in 1953 and spent a season with Ashington after being encouraged to join the club by Jackie Milburn.

After retirement Stubbins became a highly-respected sports journalist although he did return to the game briefly to coach the New York Americans, a team of expats playing  in the U.S International Soccer League. He died aged 82 in 2002 after a short illness.

Albert Stubbins received a copy of Sergeant Pepper’s Lonely Hearts Club Band and a thank-you note from Paul McCartney when the album was released. He also received a League winners medal and an FA Cup runners-up medal from his playing days. And a guaranteed place in immortality thanks to that unlikely source.